Billy Joe Saunders retained his WBO Super-Middleweight World Title with a dominant unanimous decision win over St Helens veteran Martin Murray to stay on course for a huge unification battle with the winner of Saul ‘Canelo’ Alvarez vs. Callum Smith next year.

The unbeaten 31-year-old dominated from the opening round with his superior ring skills. Murray fell short in his fifth World Title attempt, losing out on the judge’s scorecards with scores of 120-109, 120-109, and 118-110 at The SSE Arena, Wembley. 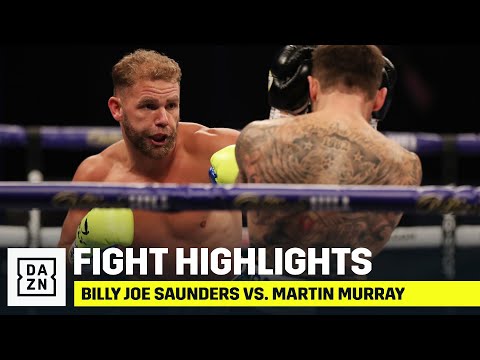 “When you’re in a training camp getting ready for Canelo Alvarez, and you’re in the biggest fight of your life, you’ve got that fear factor and everything there, and then the pandemic came, and I can only be thankful to be out this year.

But then you’re back in camp, and it’s a defense against Martin Murray; I was penciled in to fight him twice in 2018. It was sort of like a hard kick in the teeth. But look, I’ve got to thank my management team MTK that I’m even out this year. 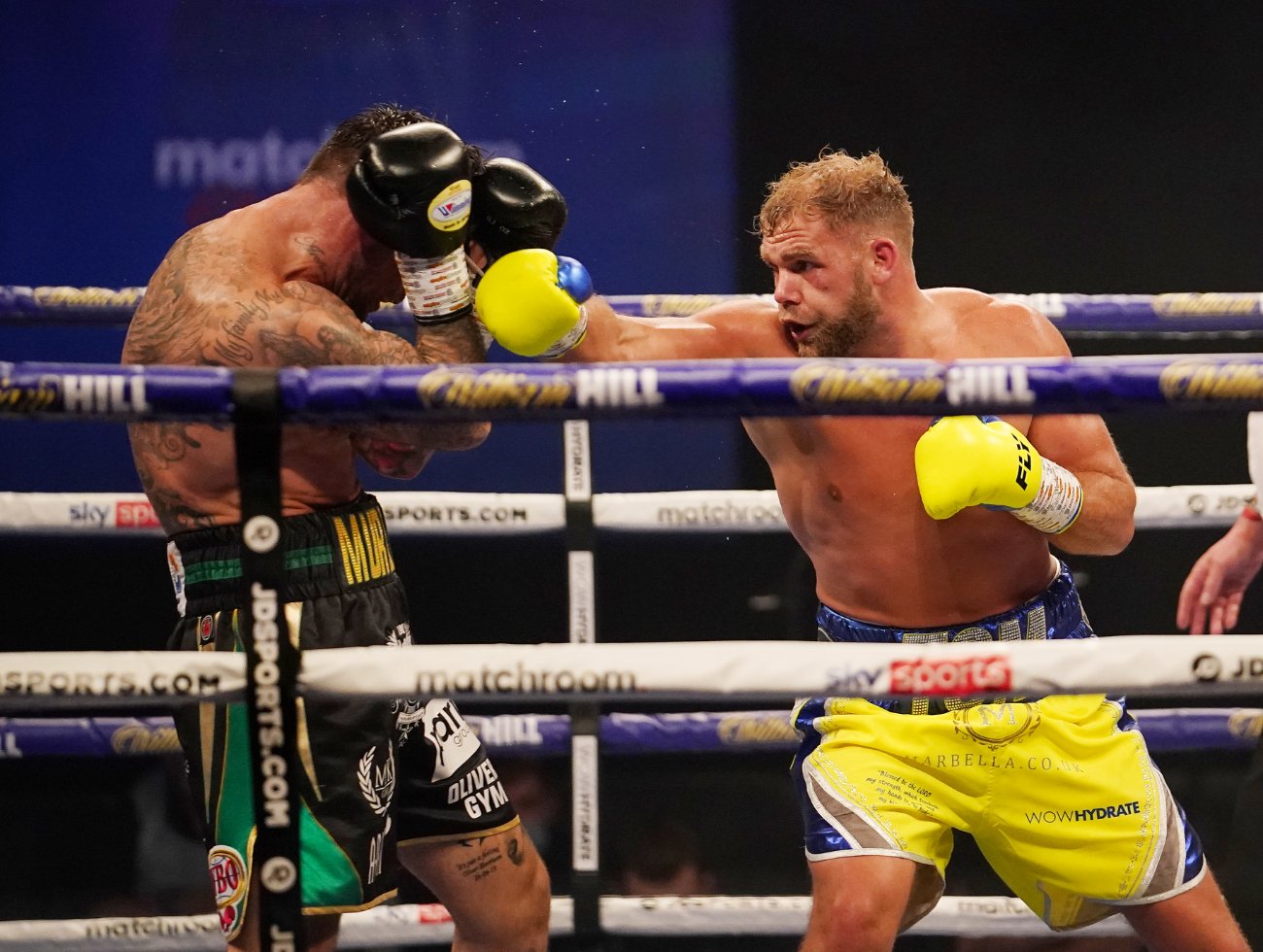 “A big well done to my lads who boxed on the show tonight. Lewie Edmondson and Donte Dixon did well.

“Fair play to Callum Smith, and I really do wish him all of the success in that fight. I think he’s got the tools to do the job. Canelo would have been training since May for this fight. He would have had Smith in his eyesight from day one. It’s been sprung on him at five or six weeks.

They’re very clever in the way they work. If Smith has done his homework and prepared well, then I give him a good chance of winning the fight. We are pushing for big fights constantly. 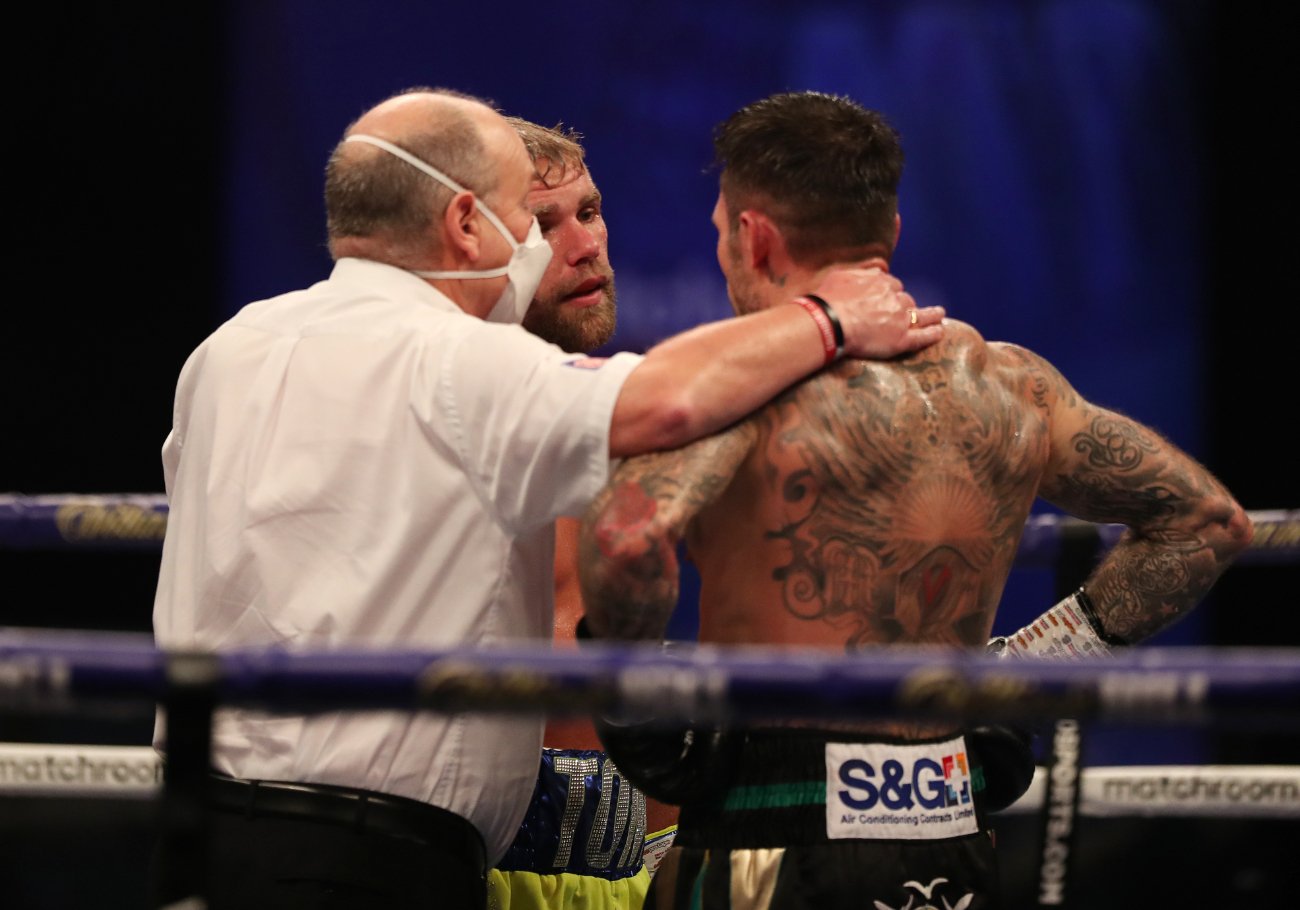 Hard-hitting Belfast Lightweight James Tennyson took a step closer to the WBA World Title by taking out Canada’s Josh O’Reilly in one round.

It is Tennyson’s sixth straight stoppage win since moving up to Lightweight, further enhancing the 27-year-old’s reputation as one of the most exciting contenders in the red hot 135lbs division.

“It was great to get the win on another great show,” said Tennyson. “I went out, and it was nip and tuck, and then I think I caught him with a left hook. I saw him go a wee bit, so I thought, ‘you know what,’ and just put it on him, and it paid off.

We came out, and there wasn’t too much to see between the two of us until I clipped him with that one shot. I got the win and an early night. 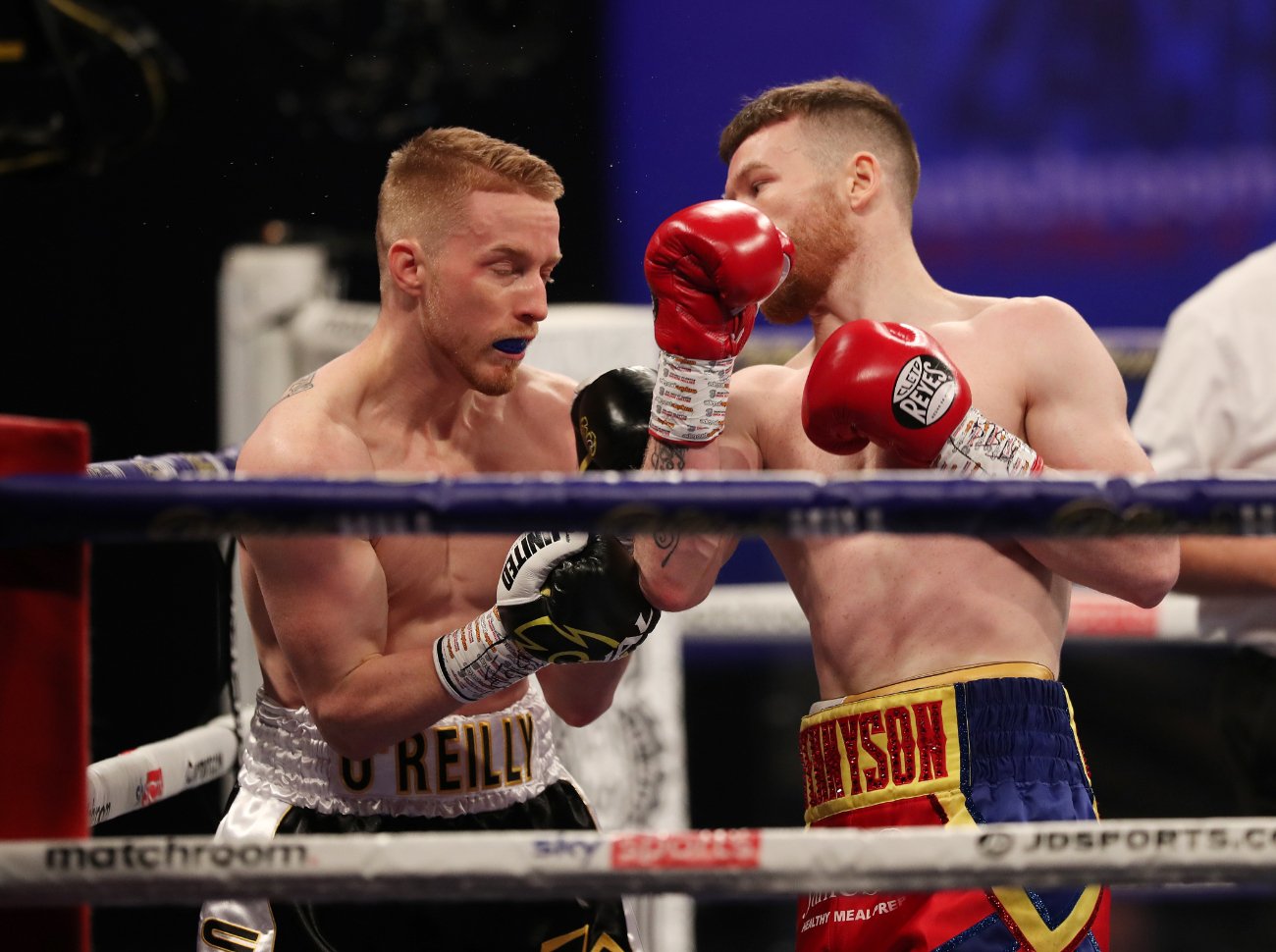 “I’m feeling like I’m going to go all of the ways here at Lightweight. I’m feeling a heck of a lot stronger and sharper. Eddie just mentioned Jorge Linares at The SSE in Belfast, and the thought of nights like that make the hairs on the back of my neck stand up.

Those are the sort of fights that I’m in boxing for. Given the opportunity, I can put my name right up there and mix it with the top names. The Lightweight division is red-hot. There’s Teofimo Lopez, Gervonta Davis, and Devin Haney. I’m here, and I’m going to start making some noise.”

Shannon Courtenay landed the best punch of her career to knockout Dorota Norek in the seventh round as she returned to winning ways. 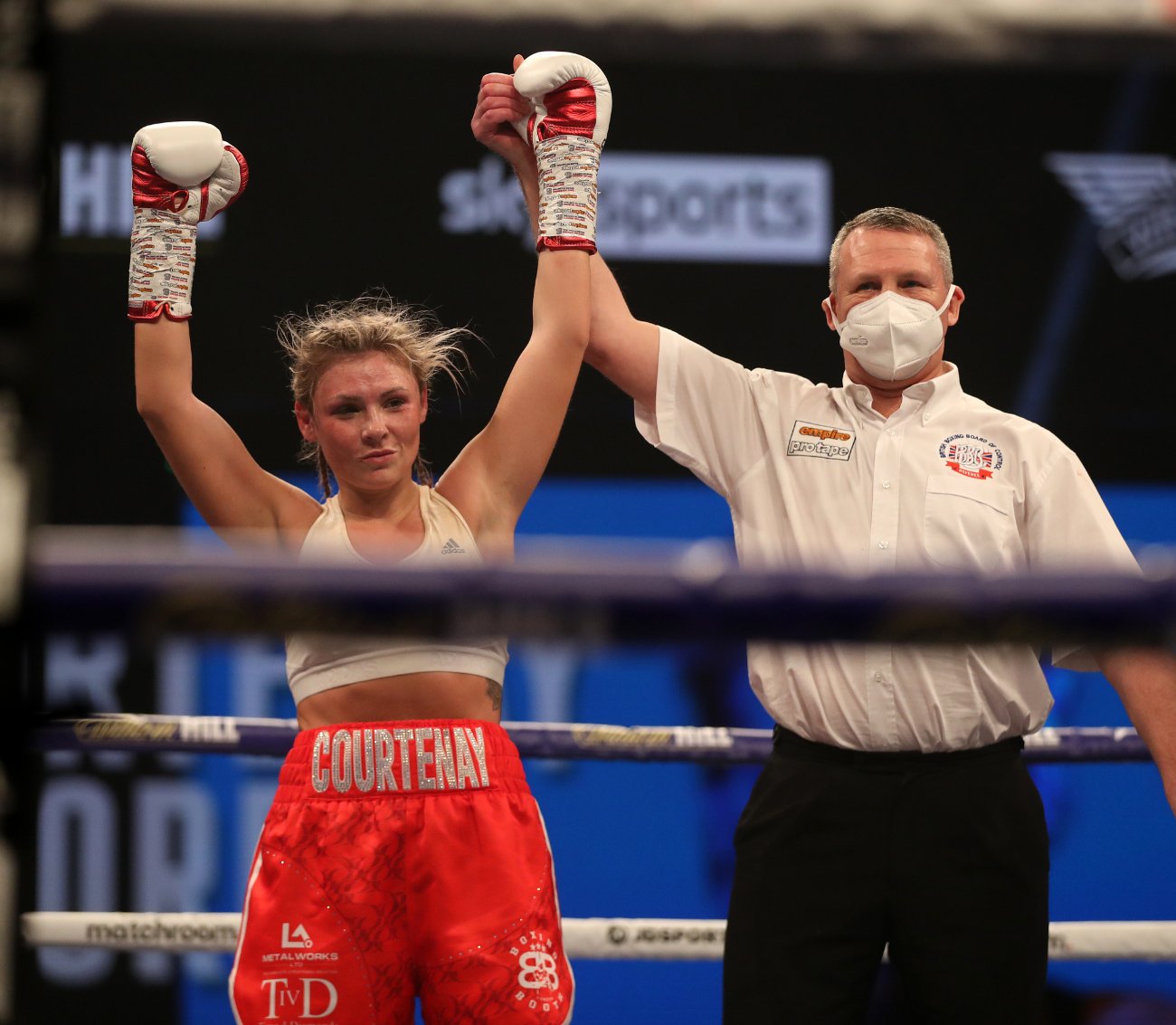 Fighting down at 118lbs for the first time, ‘The Baby Face Assassin’ had to deal with a fast start from her Polish opponent, who intended to impose another unexpected defeat on her.

The Watford prospect brawled her way back into the fight, then gradually took control, and Norek’s defenses began to unravel.

“This was needed,” said Courtenay. “I felt like I was back at home. And I felt like myself but better. I just needed this to finish the year on a high. I can go into the next fight, whether it’s the rematch or not, with good momentum behind me.

She was so rough and coming in with her head, I just thought, ‘you’ve got to be patient.’ Like I said before the fight in many of my interviews, the timing would be key. I had to be patient and wait to let my hands go.

I was countering with the left hook when she had me up against the ropes. And I wasn’t losing my head and making it scrappy. I knew that if I paced myself and didn’t rush in, I’d catch her with a right hand because she was open for it. I knew that if I were patient, it would come, and it did.

I knew I had to catch her flush to end it, so that’s what I did. 118lbs is the lightest I’ve ever been, an amateur and pro career. I want the rematch with Rachel Ball.

If she genuinely believes that she won the fight, which many people don’t think she did, why wouldn’t she want to prove people wrong? It’s a fight that everyone wants, and it makes sense.” 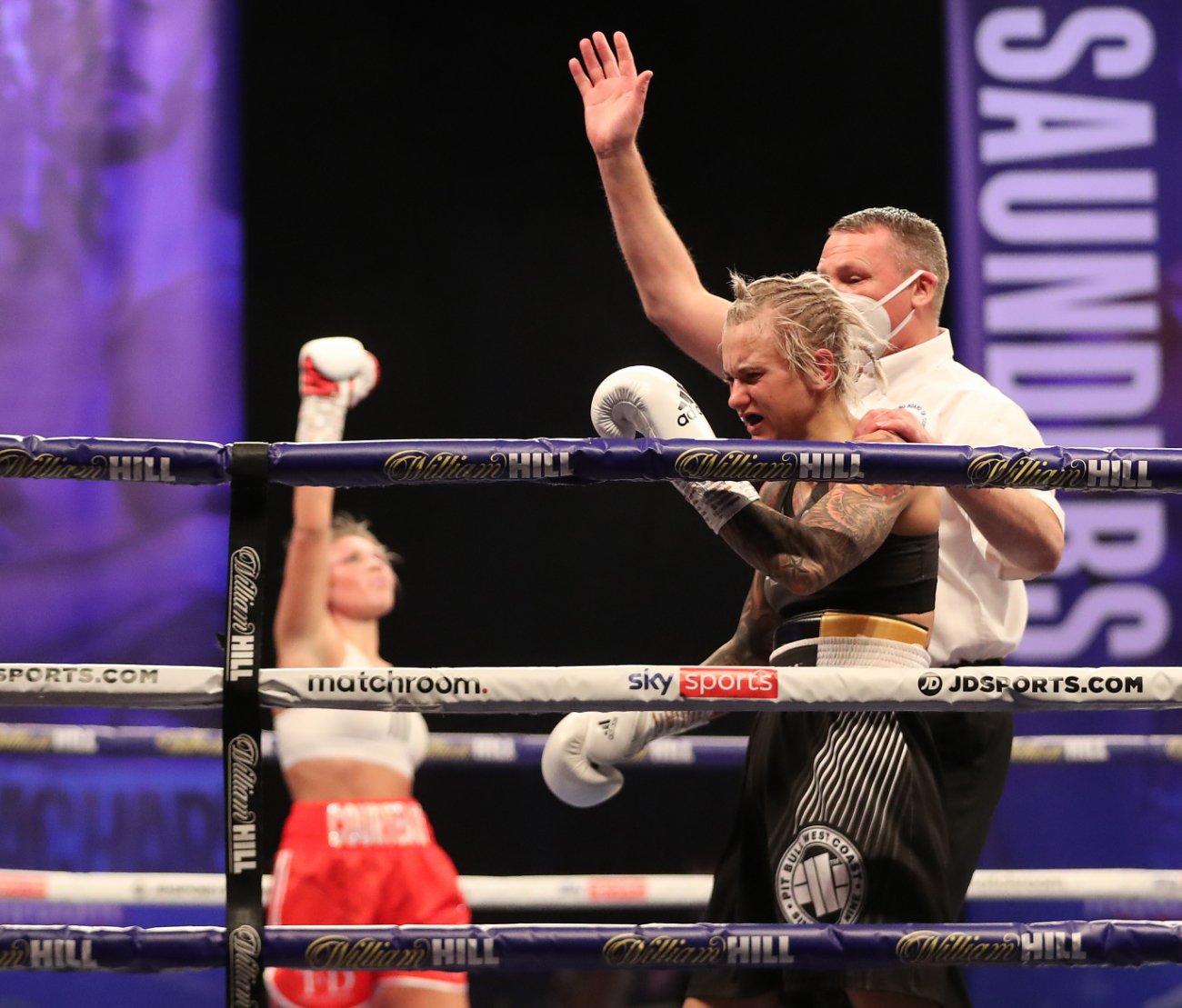 The Billy Joe Saunders and MTK-managed talent took a big step up in class against his first opponent with a winning record and raised his game to suit the occasion.

“I thought I boxed well. At some points in the fight, I stood there a bit too long and not covering up the best I can. We’ll learn from it and come back better. I’m alright with it.

I noticed that I’m up there when it comes to the levels. Levels-wise and skills-wise, I was better than him. He kept coming and made it difficult at times, but I feel like I passed with flying colors. 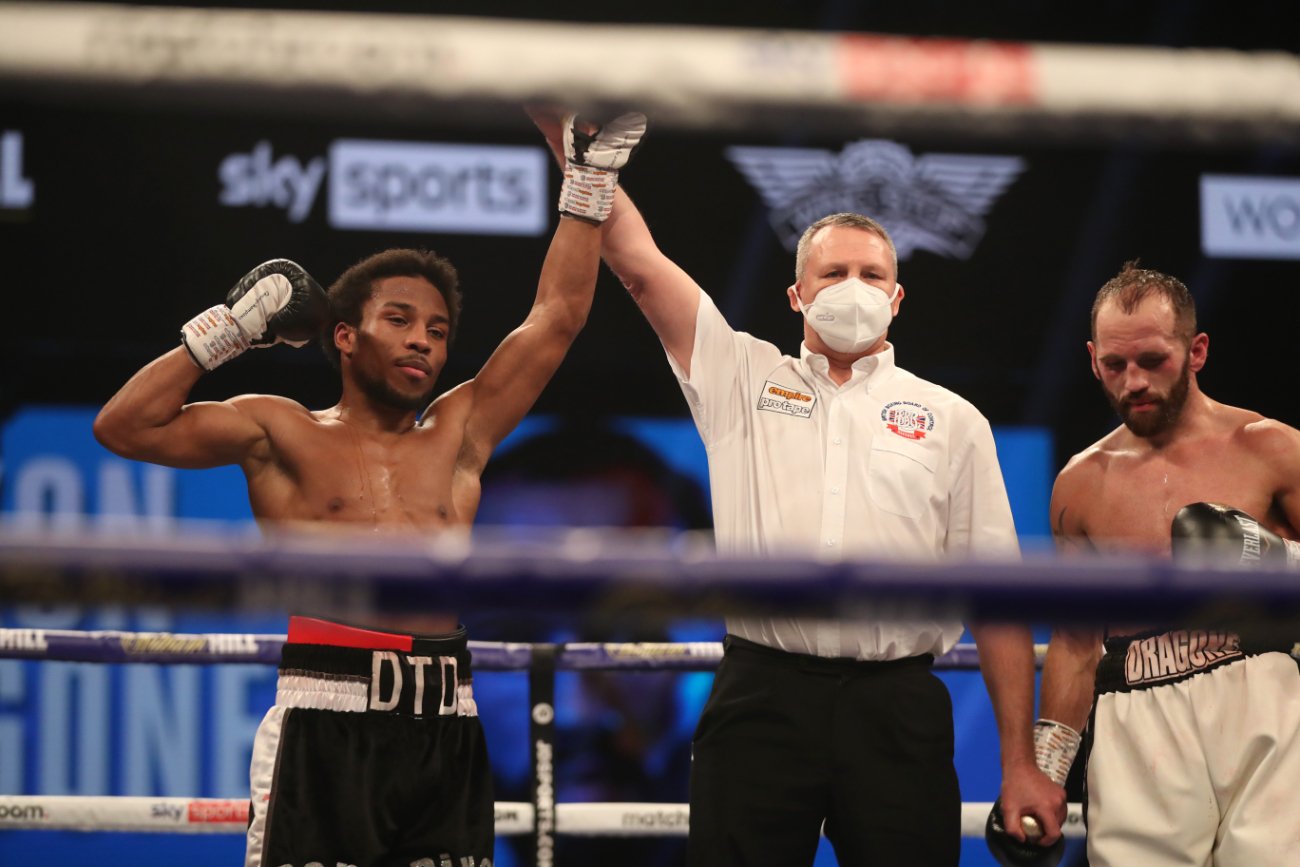 “Billy is managing me, so it was nice to look good on his undercard. Billy helps us a lot getting on these big shows; this is my third time on a Matchroom show. These are the best shows. Today I got to fight on Sky; I’ve always wanted to fight on Sky. Big thanks to Billy Joe, MTK, and Adam Etches.

“I got some significant rounds under my belt. He was a tough guy and kept on coming. I thought I nearly got him out of there in the last round when he was holding on. He was looking at the ref, but it didn’t happen.

It was a good learning fight. Whoever they put in front of me, I’ve just got to keep on beating, and then we’ll move on from there. Big thanks to my mum, it’s her birthday tomorrow. Happy Birthday, mum.”

Lerrone Richards made a winning start to life as a Matchroom fighter with a comfortable shutout points win over Finland’s Timo Laine.

In his first fight under new trainer Dave Coldwell, unbeaten Richards quickly established his probing jab in the opening minute.

Laine, who was fighting in the UK for just the second time, had clearly come to survive and offered very little offensively to Richards and his new team’s frustration. 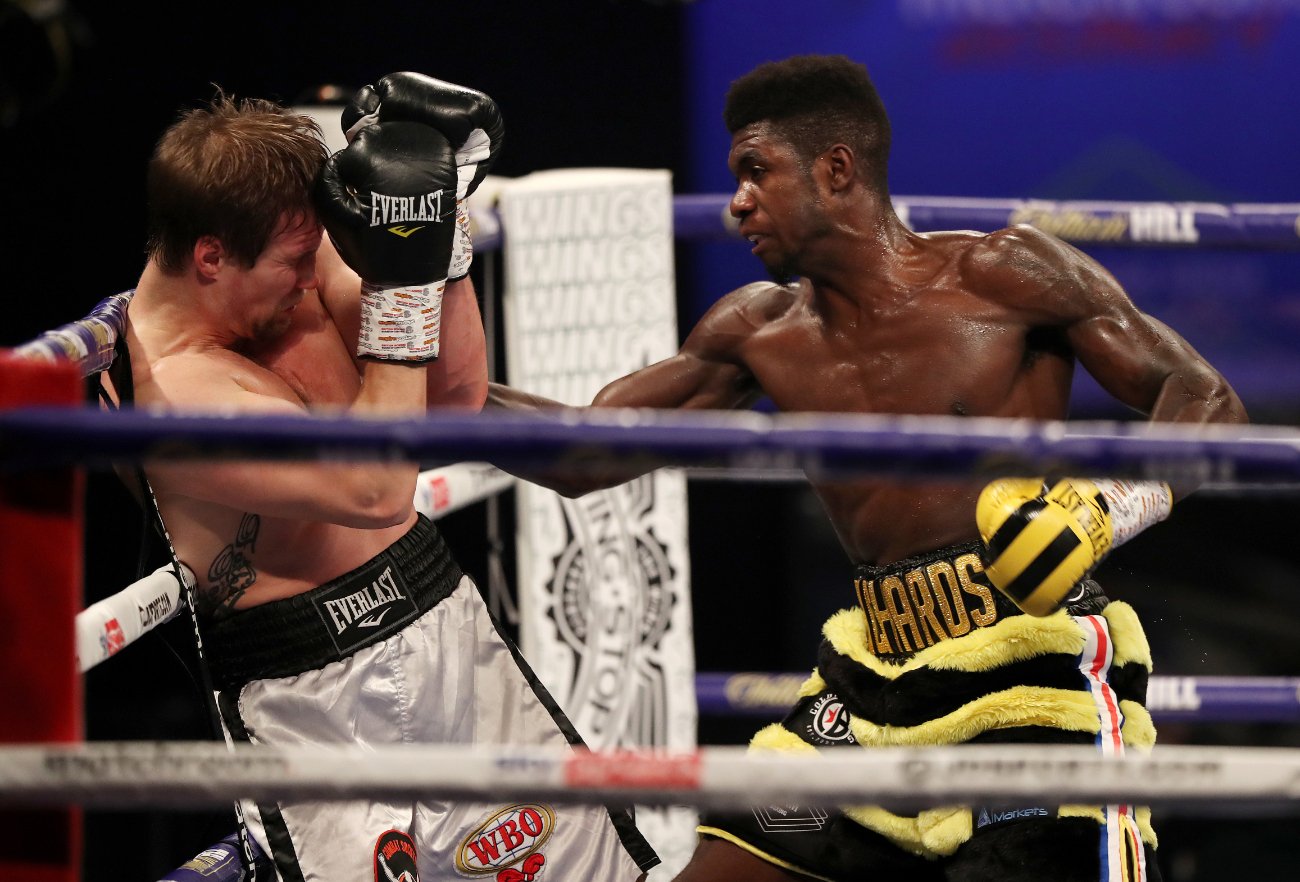 Richards, who had been out of the ring since outpointing Lennox Clarke in November 2019, cruised to an 80-72 decision on the referee’s scorecard.

“I’m pleased with it; we got the rounds under our belt,” said Richards. “We move forwards now towards European honors. He tried to do something in the opening round, and I put him in his box; he didn’t want to come out.

It was frustrating at times, so I stuck behind my jab and got the victory. I’m very pleased, it was my first fight under Dave Coldwell as well, and it was good that I could get the ring rust out for the new year.

When asked about fighting behind closed: “To be honest, it didn’t feel any different. I get on with it; it’s my job. I think I started to enjoy it a little bit more later on in the rounds.

In round eight, I started to talk a bit and have a little fun. I’m happy with my performance overall. We all bounce off each other in the gym, and we’re always learning. As I said, Dave Coldwell is a teacher; he’s not just a coach. We’re all improving every day.

“It’s some story, and it has been quite hard really the last few years; I’ve been finding myself, nobody really knows that. I’ve not had many sponsors backing me, but I believe in myself, and I believe that I can go to the top. 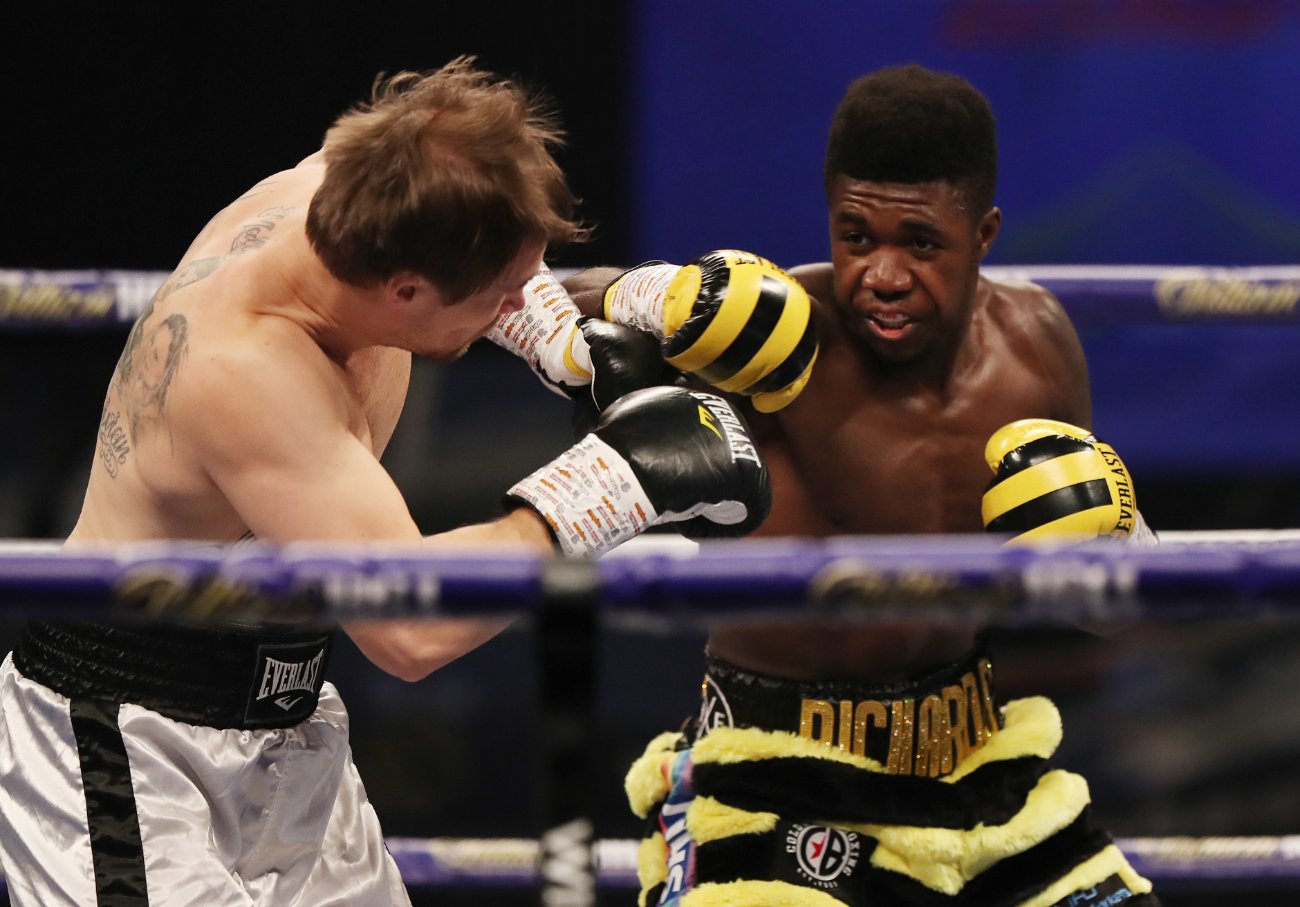 That’s what we plan on doing. I’m going to auction off my shorts, and all of the money will go to the NHS. The NHS has done a great thing for our country by supporting everyone.

“This is a marathon, not a sprint. I know I’m going to get there in the end. When I get there, I’m going to stay there. European, and then we’ll talk about world honors after. I’ll tell you, and this is a fact, I’ve had more promotion in the last two weeks than I’d had in my whole career, and I’m grateful for that. The future is bright.”

Southampton Super-Middleweight prospect Lewis Edmondson moved to 4-0 with the first stoppage win of his career against John Telford in the evening’s opening bout. 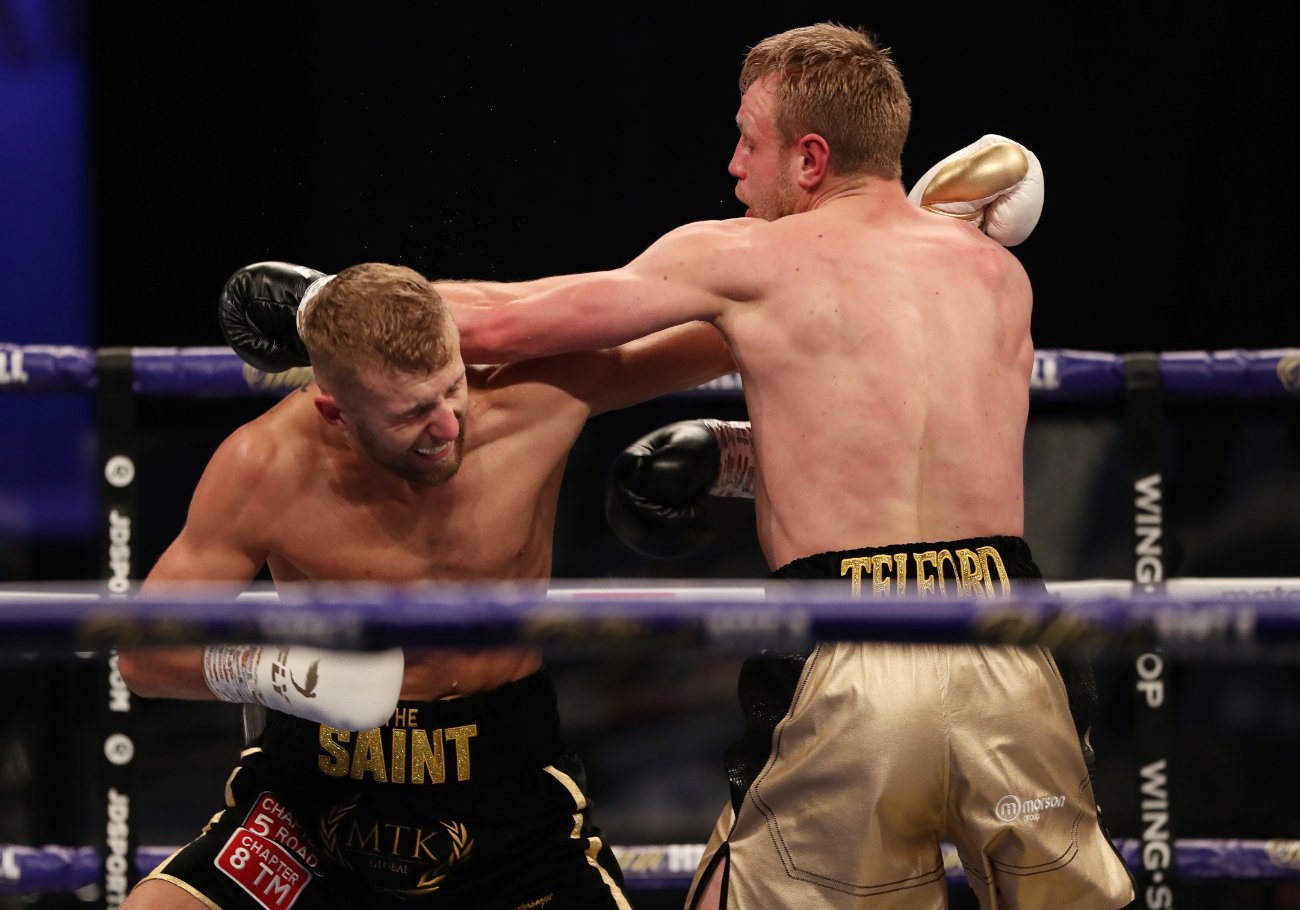 Telford was dropped in the first round before being put down again in the third; the 26-year-old bravely rose to his feet once more before the ref waved off the fight after another onslaught from Edmondson.

“We had a game plan with the team, and we stuck to it,” Edmondson told Matchroom afterward. “It obviously paid off. I think it confused him because, before the fight, he said he couldn’t find much fight footage of me.

“I didn’t want to rush it. In previous performances, I’ve caught my opponents, and I’ve rushed it. I took my time, that’s what we’ve been working on, and I got the job done.

I can’t thank my team, Billy Joe Saunders and MTK, enough. I’ve been out twice within a month. This was meant to be a good step-up on paper, and a lot of people thought it was a hard fight for me. I’m glad I got to show my level.

“It’s hard trying to break those journeymen down because it’s their job to survive. 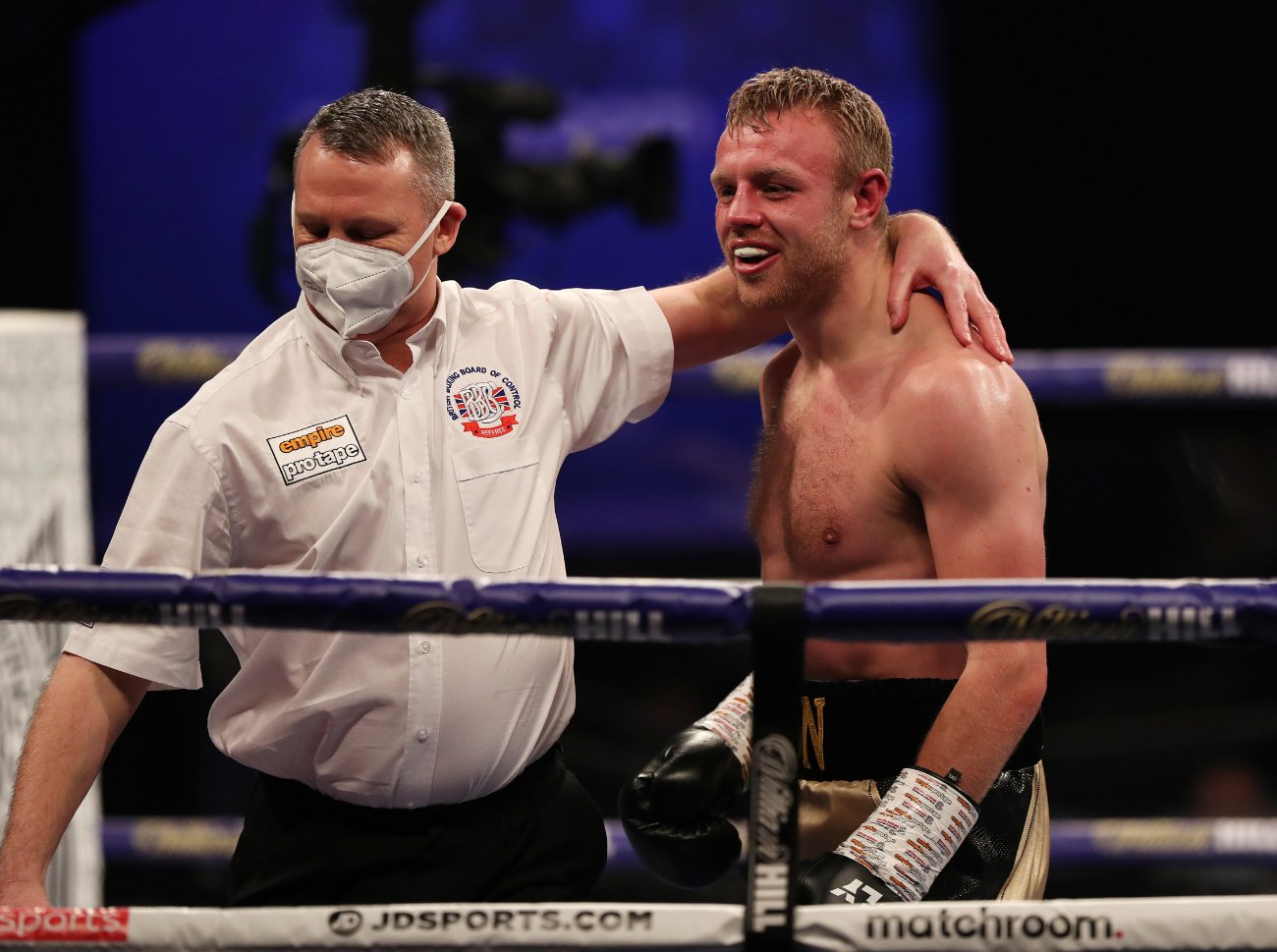 We knew the stoppages would come once my opponents started opening up a bit. It was a big step up, and I think I made light work of him. Billy Joe wants to move me quickly; he’s seen what I’ve been doing in the gym. We’re ready to move forwards. I feel like I’m improving every day.”