John Ryder to fight on Golovkin vs. Szeremeta card on Dec.18th 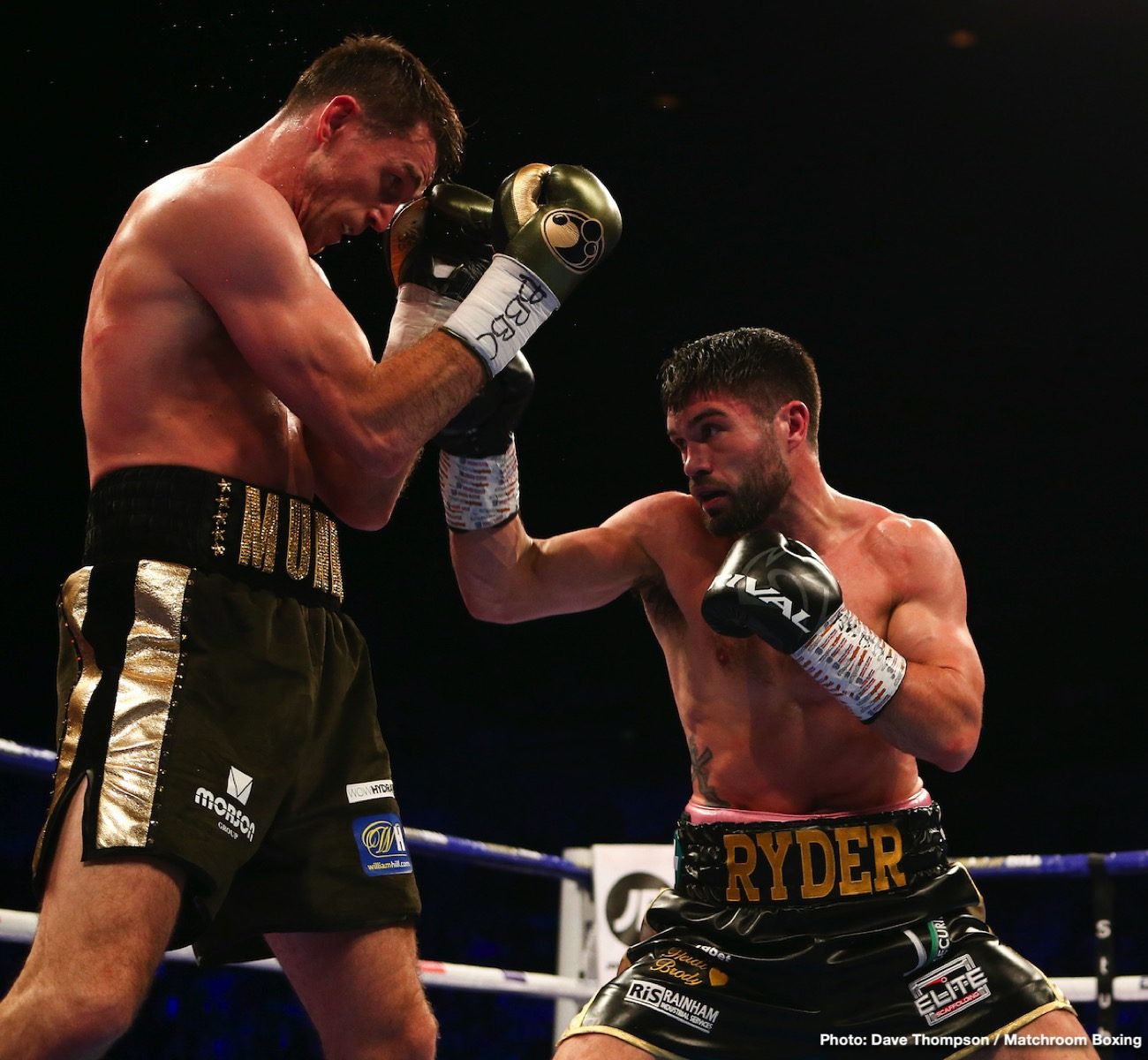 By Dan Ambrose: Super middleweight contender John Ryder will be fighting a still to be determined opponent on the Gennadiy Golovkin vs. Kamil Szeremeta card on December 18th at the Seminole Hard Rock Hotel and Casino, in Hollywood, Florida.

Ryder also will serve as a potential reserve opponent for Canelo’s December 19th fight if Callum Smith falls ill or is injured in the final weeks of training.

According to Eddie Hearn, ‘Gorilla’ Ryder (28-5, 16 KOs) will be taking a warm-up fight to sharpen him up before matching him against former WBA super-middleweight champion Fedor Chudinov (23-2, 6 KOs) in early 2021.

Hearn doesn’t want to match Ryder against #8 WBC, #10 WBO Chudinov straightaway on December 18th because he hasn’t fought since last year in November in a losing effort against Callum Smith.

Ryder and Chudinov will be fighting for the WBA ‘regular’ super-middleweight title, currently being held by Canelo Alvarez. 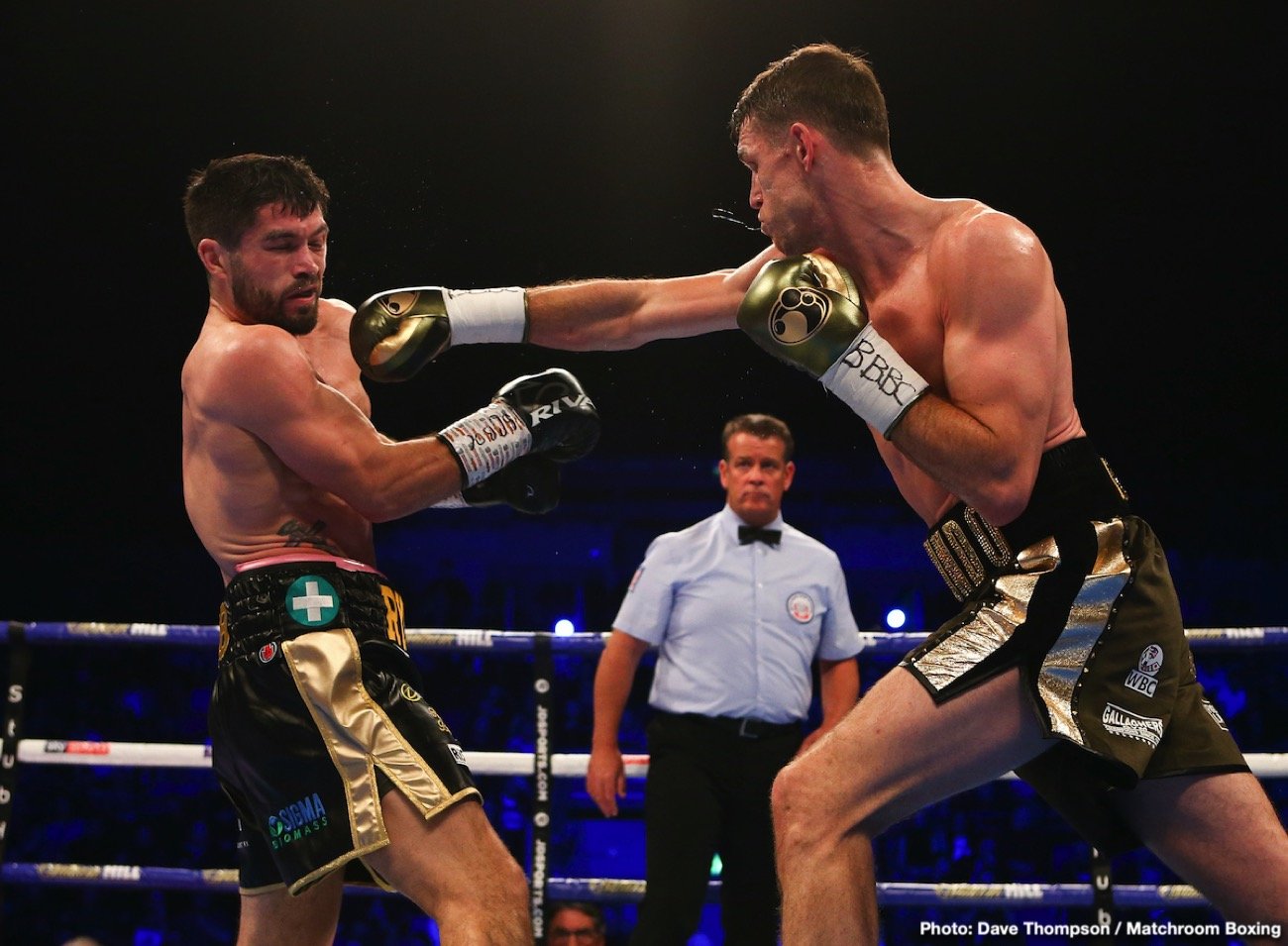 Chudinov and Ryder will then battle it out for the belt. It’s a smart move by Hearn, putting Ryder in a position where he has a good chance of winning to become the WBA secondary world champion at 168.

Ryder to fight on December 18th

“Golovkin card,” Hearn said about John Ryder being possible for GGG’s undercard on December 18th. “We’re discussing it at the moment. Canelo was the regular [WBA super middleweight] champion.

“He’s now fighting [Callum] Smith for the Super Champion. John Ryder will fight for the WBA regular world title in early 2021, and it looks like he’ll fight [Fedor] Chudinov.

“But I want to get him out boxing because he hasn’t boxed in a year. So my plan is to box him on the Goovkin card.

“Listen, he could wind up being a reserve for the Canelo vs. Callum Smith fight [on December 19th]. He’ll be out there and ready to go. So that’s the plan for him,” Hearn said.

“On the Canelo card will be Julio Cesar Martinez defending his WBC world title,” Hearn said. “Another fight I’m working on right now is Frank Sanchez, which is Eddy Reynoso’s heavyweight.

“I want Callum Smith to knock him [Canelo] out,” Hearn said when asked if he’s planning on working with Alvarez more in the future.

Ryder, 32, isn’t a great backup option for Canelo if Smith pulls out of the fight for any reason.

It’s understandable why Hearn would want to use one of his own Matchroom Boxing stable fighters as a replacement to match against Canelo, but #7 WBA Ryder is not a great choice for the U.S market.

A better choice for Canelo to fight as a possible replacement would be one of these guys:

Canelo will want Saunders or GGG in 2021

“I think with my DAZN hat on, that was a major, major coup for Matchroom to help be able to make that fight [Canelo vs. Callum],” Hearn said. 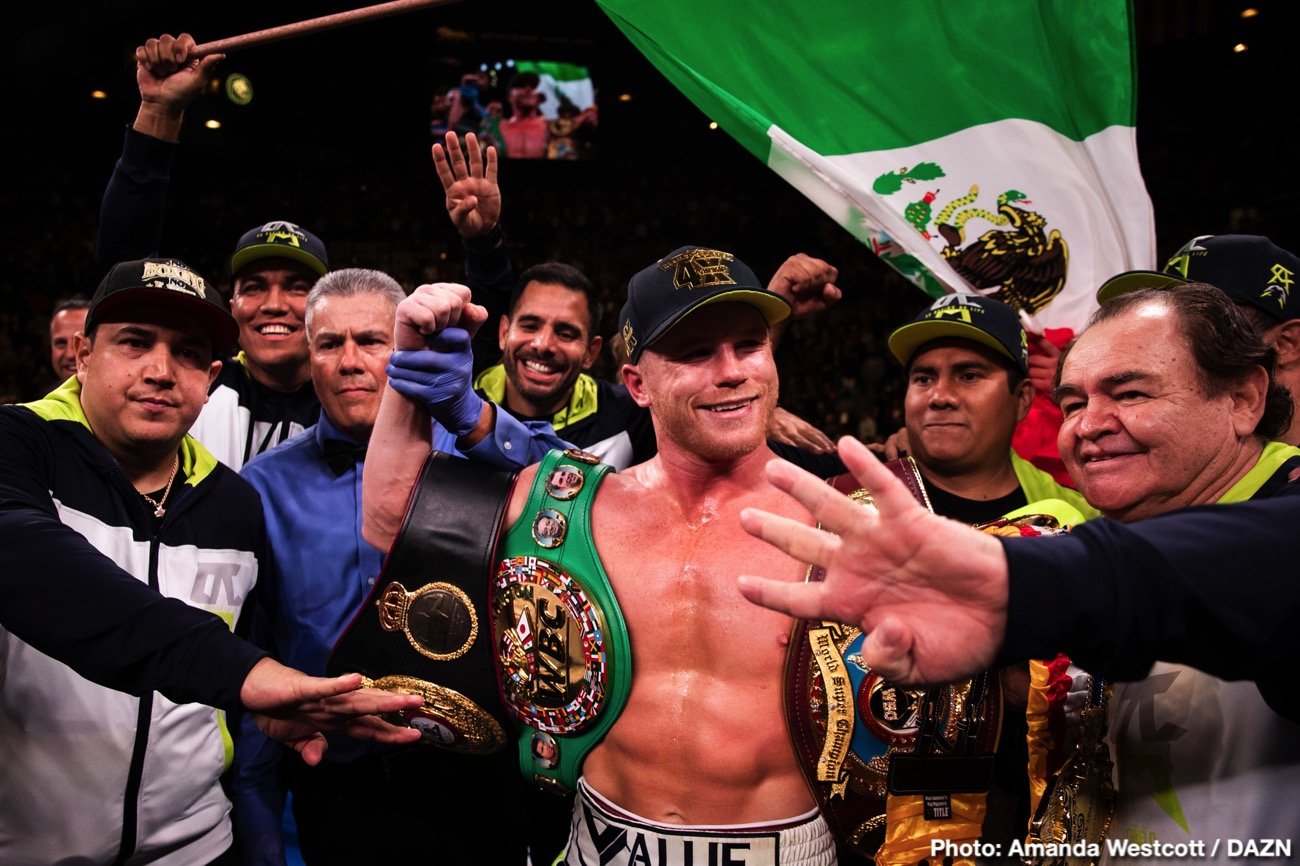 “As I’ve stated before, Canelo is the boss, Canelo controls everything, but he got the opportunity to deliver to our guy, Callum Smith, the opportunity of a lifetime [against Canelo], so I’m over the moon.

“Now my whole focus is on Callum Smith winning that fight,” Hearn said. “If Callum wins that fight, you’re likely going to see another fight with Canelo.

“If Callum loses that fight and DAZN wants me to try and make the Golovkin, which is another fighter that I’ve worked with, or Billy Joe Saunders, then I’ll do that. I think that win or lose; this is going to be the start of a long-term relationship with Canelo Alvarez.

“That’s down to him and his boss Eddy Reynoso. But so far, we’ve managed to get a deal done on all odds, and so far, everybody is happy.

“Obviously, my focus is for Callum Smith to shock the world in that fight and beat Canelo Alvarez. But again, if he loses, we’ll be doing the next fight.

“And if he wins, as Canelo Alvarez said after the Danny Jacobs fight, ‘Give me more, give me more.’

“So what he means by that is, he’s beat Rocky Fielding, he’s beaten Daniel Jacobs, and he was talking about Billy Joe Saunders and Callum Smith.

“So now he’s fighting one of them, and if he was to beat Callum Smith, he’d say, ‘Give me more,’ and I’d have to make the Golovkin fight or the Billy Joe Saunders fight.

“But as I said, he’s [Canelo] not a Matchroom fighter. We’re just working together,” Hearn said. 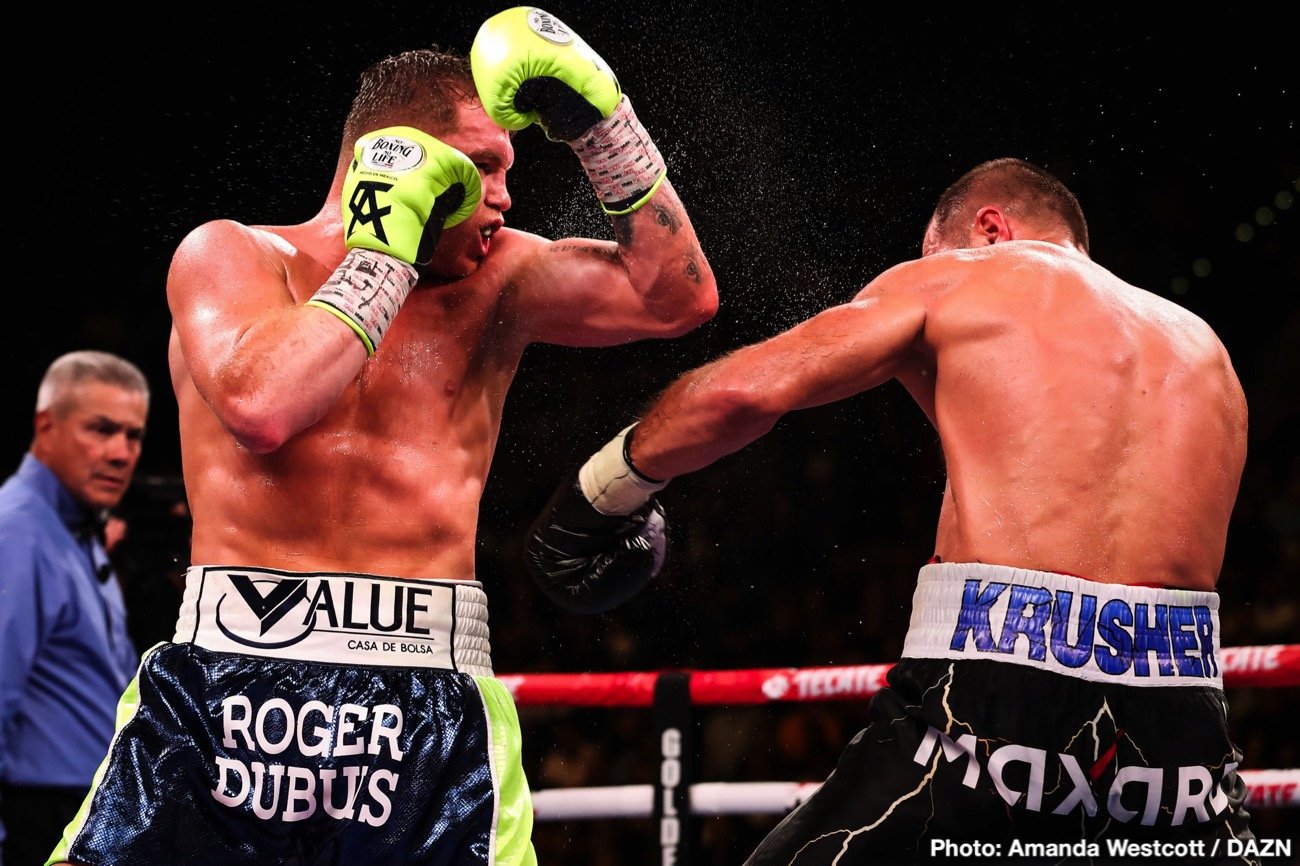 “Callum Smith is my guy, and that’s whose team I’m on certainly, and I want to see him do the business and get a win,” Hearn continued

“Although this is a fight by fight arrangement, there’s no doubt that Canelo looks at Matchroom and DAZN and goes, ‘Callum Smith, Billy Joe Saunders, Gennadiy Golovkin; Well, that’s me for a year and a half.’

“As long as the deal is right, that’s the perfect schedule. So I think that’s the plan of action. He thinks he’s going to beat Callum Smith and then fight Billy Joe or Gennadiy Golovkin.

“And whoever he doesn’t fight first, he fights second. These people [Tean Canelo] think they’re unbeatable, and they might be very good.

“But they truly believe they’ll beat everyone, and they don’t mind fighting anyone.

“As I said, win or lose, this is the beginning of a relationship with Canelo Alvarez, but again, he’s the boss, and he calls the shots.

“I work in this fight for Callum Smith, and I work for Canelo Alvarez to put the show on and help out. But he’s the boss, he controls everything, and we’ll see if Callum Smith can do the business,” Hearn said.

Callum Smith has a great shot at defeating Canelo, as long as he doesn’t allow him to get inside.

Most people believe that if Canelo can get inside on Smith, he’ll knock him out as he did against Rocky Fielding. Smith can’t fight on the inside, and there’s not enough time for him before facing Canelo on December 19th.

Boxing » News » John Ryder to fight on Golovkin vs. Szeremeta card on Dec.18th