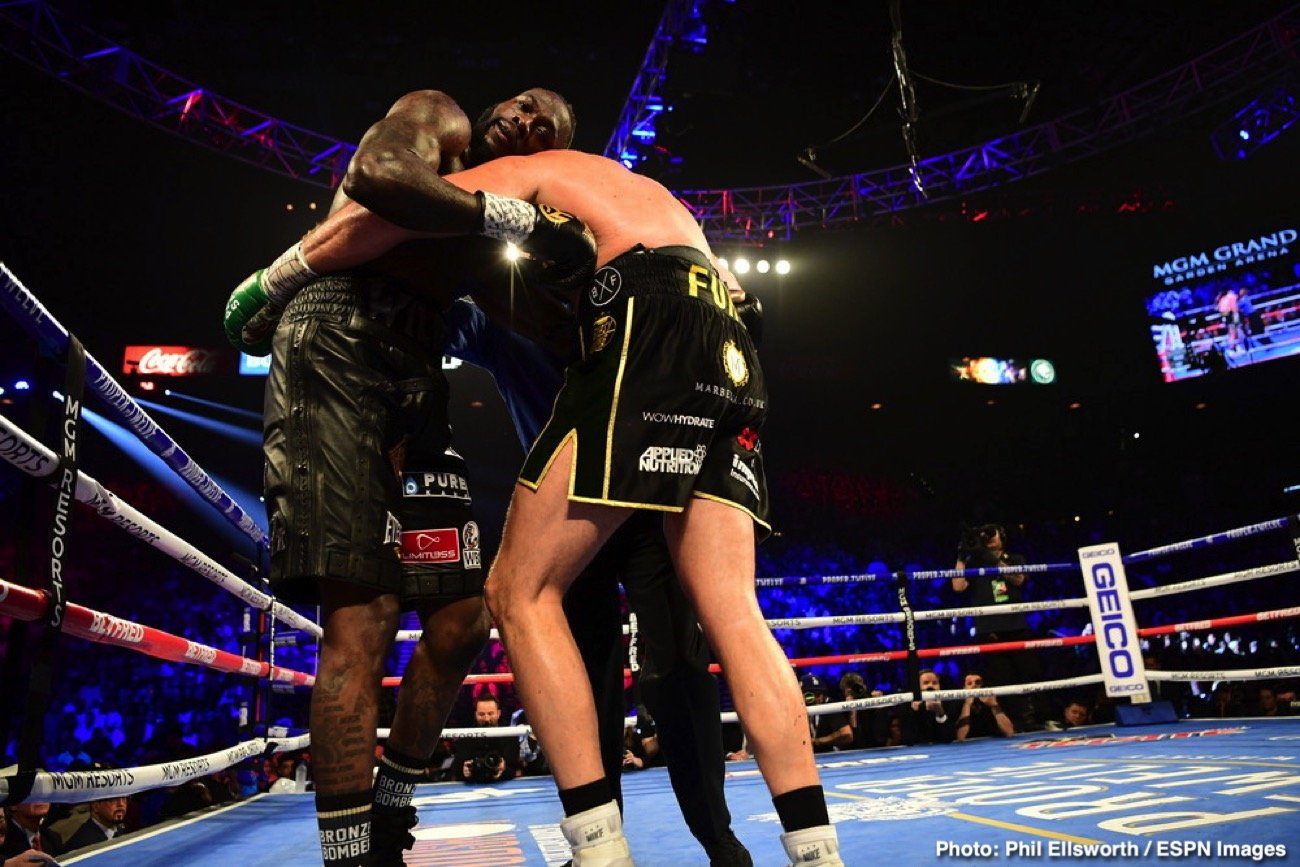 By Charles Brun: Promoter Frank Warren expects a decision to be made on the situation with Tyson Fury and Deontay Wilder in the “next week or so.” Fury and Wilder are dealing with mediation in the U.S, and the decision is expected to be made soon.

Former WBC heavyweight champion Wilder (42-1-1, 41 KOs) is attempting to enforce his rematch clause in his contract with Fury (30-0-1, 21 KOs) from their previous match last February.

Wilder wants to fight Fury in a trilogy match, but the feelings aren’t mutual, unfortunately.

Fury would prefer to fight German heavyweight Agit Kabayel on December 5th in a nice little easy money tune-up in London, England, and then cruise into the first of two mega-paydays against IBF/WBA/WBO champion Anthony Joshua in the first half of next year.

Fighting the weak-punching Kabayel would present little risk to Fury’s sometimes fragile chin, but you can’t say the same if he is forced to battle the dangerous knockout artist Wilder.

If the mediator orders Fury to face Wilder next, he’ll be taking a major risk that could potentially overturn the applecart and spoil his plans for the payday match against Joshua.

There’s a lot of gravy for Fury to scoop up fighting Joshua. It’s almost not even a sporting fight. It’s more business-level, which you can argue is the main reason why Fury appears to want no part of the incredibly dangerous 6’7″ American talent Deontay.

Fury was already knocked flat by Wilder in their first fight in 2018 in the still much-talked-about 12th round knockdown.

“I think there will be next week as to what’s going on,” Warren said to BT Sport Boxing on an update on Fury’s next fight. “Next week, we’ll know what the position is.

“He’s been training very, very hard, and he just wants to get back in the ring, and we’re trying hard to make that happen,” Warren said of Tyson Fury. “No, that’s what it was in.

“Unfortunately, because of the COVID and the finances for that particular fight, it wasn’t to be. We tried to make it again, and we tried to work on it, but it expired.

“I think it’s well known now that there’s a hearing going on. Something will be done in the States, and some decision will be made in the next week or so,” said Warren.

It’ll be interesting to see what Fury’s management at Top Rank decides to do if the mediator says that they’ve got to take the rematch with Wilder next.

Will they ignore the mediator and press ahead for the soft fight against the bottom-ranked #15 Kabayel, or will they agree to face the angry bull-like Deontay, who will be seeing red by the time he gets inside the ring with Fury?

Crawford vs. Brook: Can Kell win this fight? »