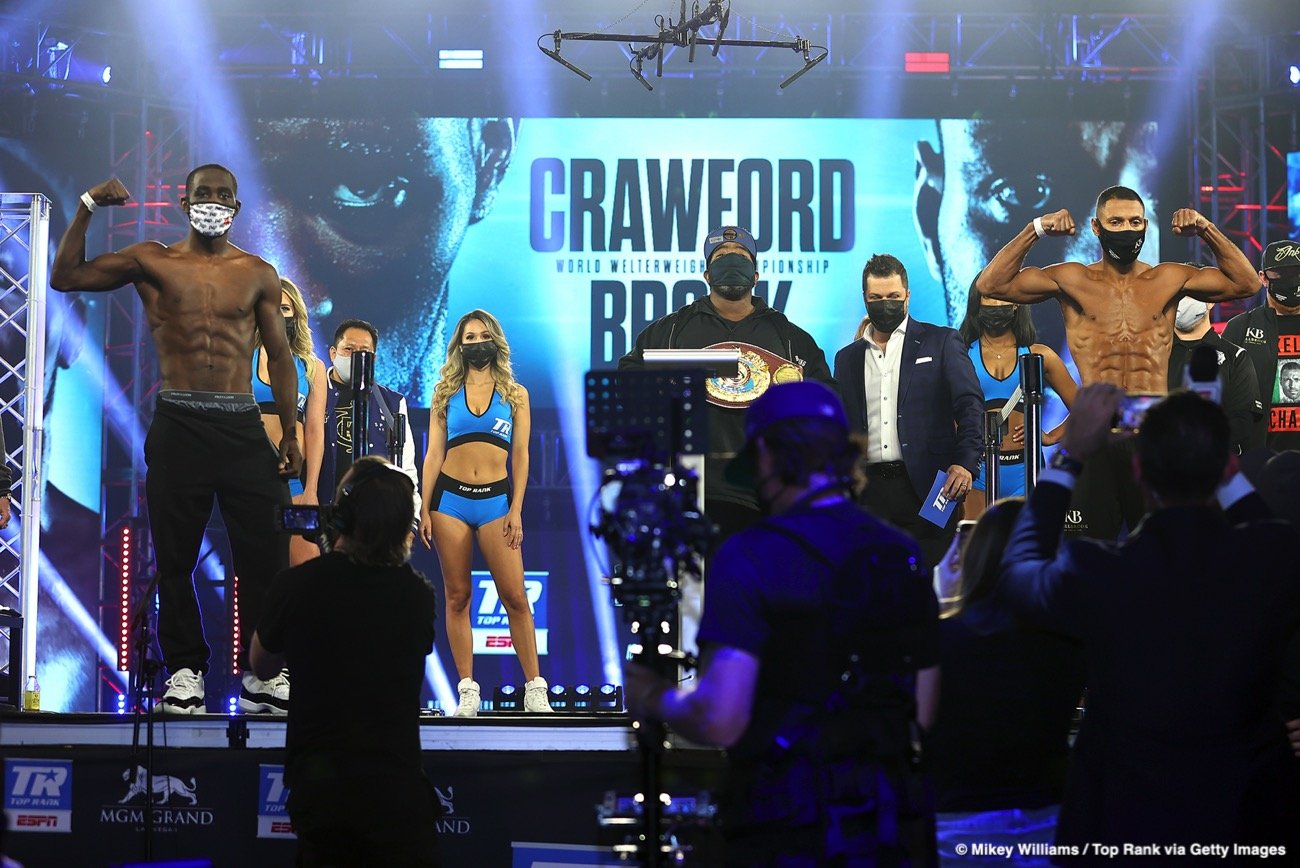 By Chris Williams: In a sign of worry, Terence Crawford lost his cool at the weigh-in on Friday, and trash-talked challenger Kell Brook during and after the face-off. Crawford (36-0, 27 KOs) was highly agitated for some reason during the staredown, and he looked he was ready to start throwing punches. 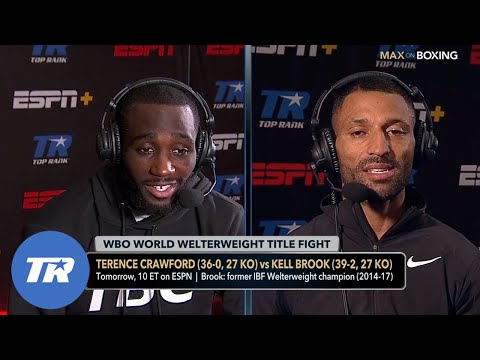 Brook should show whether Crawford has true talent rather than fake hype based on wins over fluff opposition.

Even though it’s been three years since Brook last fought a solid opponent, he’s still world’s better than anyone Crawford has ever faced during his 12-year pro career. Hopefully, this fight lives up to expectations and we don’t see a disappointing track meet.

Former IBF welterweight champion Brook (39-2, 27 KOs) had to get Crawford back under control by saying neutral things during an interview with ESPN afterward.

It was a really bad idea for ESPN to interview Crawford and Brook with them side by side in a split-screen. By doing that, it led to both of them saying basically nothing.

When you compare the promotion of the Teofimo Lopez vs. Vasily Lomachenko event to the Crawford- vs. Brook fight, there’s no comparison. This one wasn’t as smooth. Crawford and Brook weren’t able to hype their fight nearly as well as Teofimo singlehandedly did for his match against Lomachenko.

Kell took it easy on Crawford

Brook, 34, seemed to realize that Crawford was about to blow his stack, so he took the mature approach and sounded like a politician running for office. When Brook even hinted at wanting to go and perform well on Saturday, Crawford would talk over him. In hindsight, it was a silly idea for Max Kellerman to interview both fighters at the same time.

Crawford’s best career wins are against these fighters:

Crawford hasn’t fought anyone to be rated #1 on the pound-for-pound list, and that’s the sad part. Almost any of the top 147 and 140-pound fighters would beat everyone that Crawford has ever faced before.

If you feed the above guys to Josh Taylor or Keith Thurman, what do you think is going to happen? The whole pound-for-pound business is baloney. It would have been better off for Kellerman not to mention Crawford’s pound-for-pound status because that’s something that’s hard to swallow, given the mediocre opposition that he’s been facing.

If Crawford had wins over the likes of Errol Spence, Shawn Porter, Keith Thurman, and Danny Garcia, then you could talk pound-for-pound. But you can’t do that with Crawford’s recent wins over Amir Khan, Kavaliauskas, Jose Benavidez Jr, and Jeff Horn at 147. 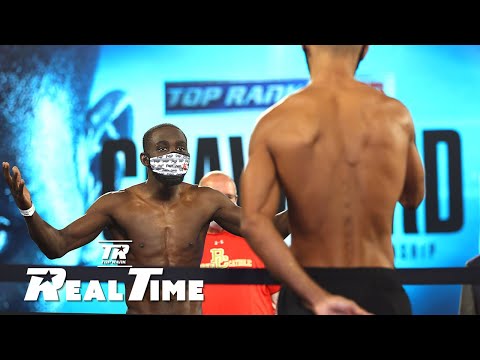 With Kellerman pouring the compliments on with Crawford, it made a mockery of the dual interview format. Brook should have walked away, but he stuck it out like a trooper.

“You can see in my eyes that this is going to be a tough fight tomorrow,” said Brook.

“You’re eyes? How can I see it in your eyes when they’re both messed up,” said Crawford.

“Let’s be serious. You know or you will know when the bell rings,” said Brook.

“We shall see,” said Crawford, assuming that Brook will be no different than his past opponents.

“It’s already written, me victorious,” said Crawford in butting in during Brook’s conversation with Kellerman.

“No, me victorious,” said Brook.

“He don’t know what’s in store for him tomorrow,” said Crawford. “I don’t get caught up in the pound-for-pound. Because they made it for me, that’s why,” Terence said when asked why he’s wearing a mask that says, ‘Pound-for-pound.’

“They made it for me, but it really doesn’t make a difference to me if I wear a mask saying ‘pound-for-pound’ or not. I’ve been saying that since day one. I always felt I was pound-for-pound #1 prior to Lomachenko being given that #1 spot.

“Now that they gave me the pound for pound spot, it’s cool that people give me my credit, but at the same time, it don’t feel no different because I always felt that was the #1,” said Crawford.

Kell says the oddsmakers got it wrong

“They obviously got it wrong,” said Brook when asked his thoughts on the oddsmakers having him a 7 to 1 underdog. “I don’t think they realize that I’ve been in with two elite fighters, one at middleweight and one at welterweight.

“The weight killed me fighting Golovkin and coming back down [to welterweight]. I’ve know about this for a while. I’ve managed my weight and come back to welterweight. It’s no excuse. Listen, it’s a fight. I’m ready, he’s ready and that’s all we can do,” said Brook. 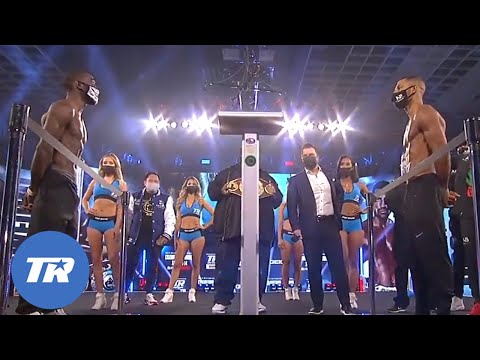 “I’m ready for each and every fighter that’s put in front of me,” said Crawford. “Of course, Kell Brook boosts a lot of adrenalin and spikes my energy. He is a great talent and a former champion.

“He has done great things with three top fighters that he’s had, but at the same time, I’ve trained my a** off like I normally do, and I did everything that I had to do in training camp. I’m not too much focused on Kell Brook. I’m just ready to go out and display my talent and have fun doing it,” said Crawford.

The oddsmakers are jumping on the bandwagon, picking a winner based on the hype rather than knowing who will win. That’s why it’s risky to pick the favorite because with the way that fighters matched softly, it’s impossible to know will really win in a lot of cases.

Crawford’s resume is too poor to know how he’ll do against Brook. The only thing we can say for sure is that this is a toss-up fight. Brook is the more proven guy, but it’s been years since he last fought a talented opponent.

We don’t know how much he has left. Also, the eye injuries that Brook suffered against Errol Spence Jr and Gennady Golovkin are a major concern. 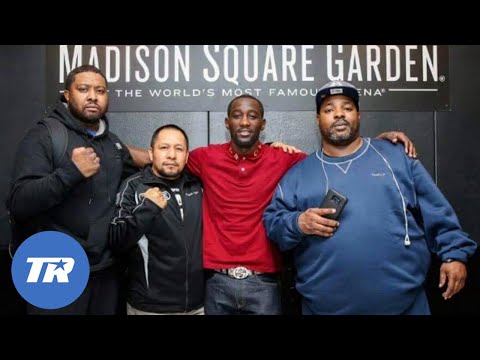 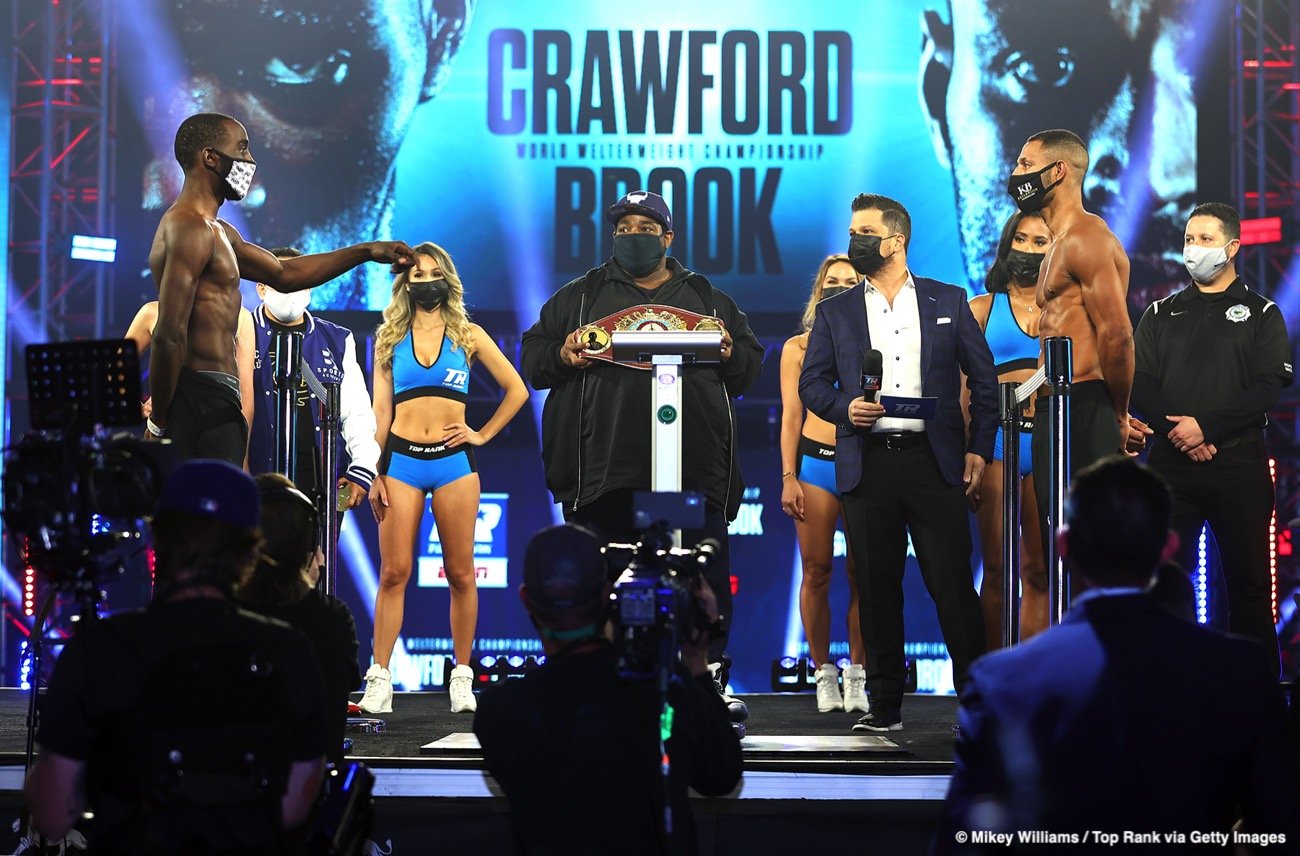