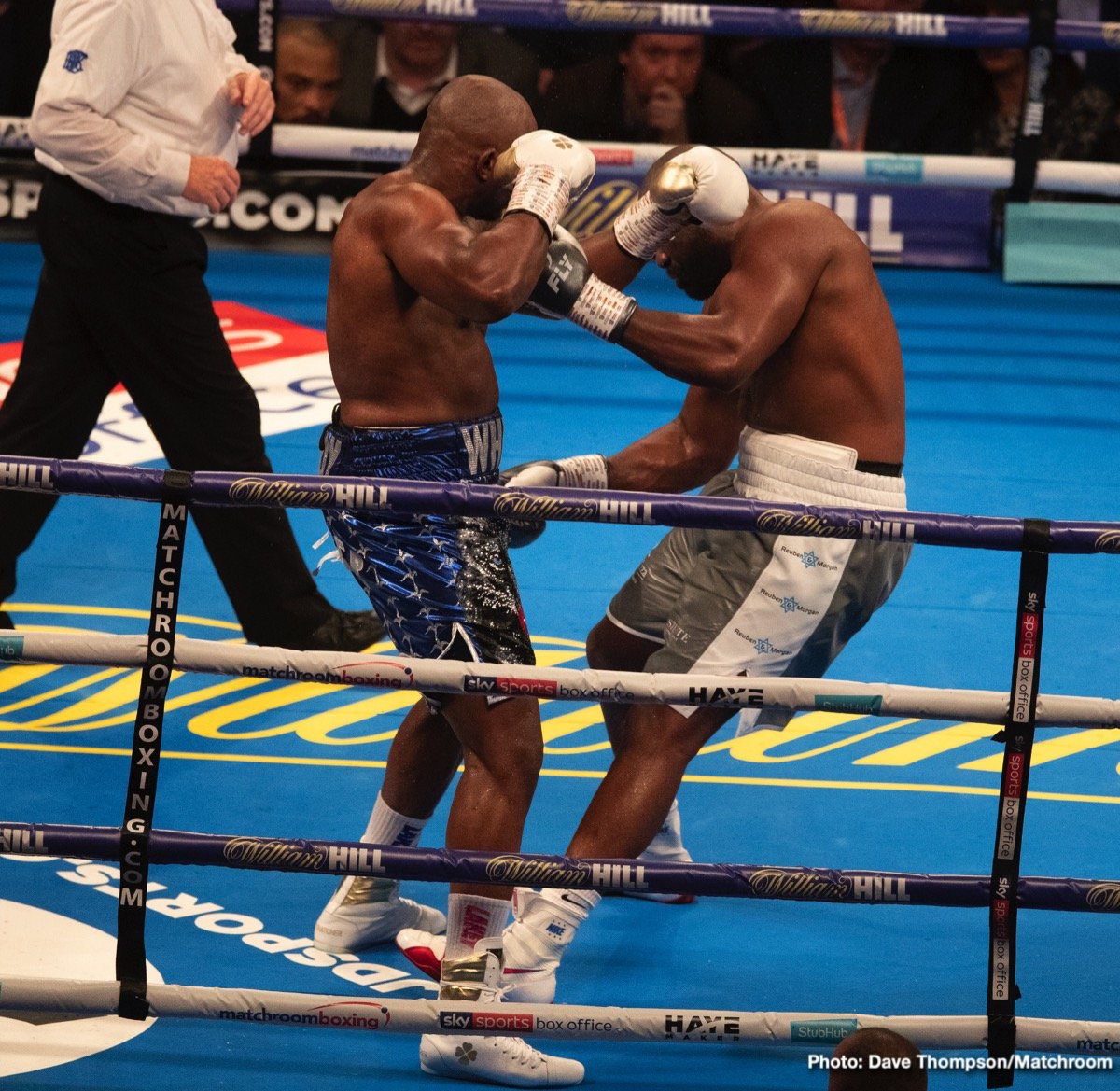 By Charles Brun: In what could prove to be a useless move, manager David Haye is trying to make a case of Dereck Chisora replacing the sick Alexander Povetkin as the opponent for Dillian Whyte on November 21st on Sky Box Office pay-per-view.

Matchroom Boxing promoter Eddie Hearn informed the fans on Tuesday that Povetkin, 41, tested positive for COVID-19, and his November 21st fight against Whyte (27-2, 18 KOs) would need to be postponed until January 30th.

In moving quickly, Chisora (32-10, 23 KOs) contacted Hearn during his Instagram live on Tuesday and told him that he’s ready to jump in there like a trooper and take on Whyte on November 21st to save the pay-per-view date on Sky Box Office.

Dereck’s chances of getting Dillian fight are slim

Hearn didn’t seem remotely interested in taking Chisora up on his offer, which is understandable given that he lost a 12 round unanimous decision last Saturday night to Oleksandr Usyk.

Although the 36-year-old Chisora insists that he came out of the contest with the unbeaten Usyk (18-0, 13 KOs) with no injuries, Hearn still appears to have no interest.

Not surprisingly, the fighter that Hearn did make a push for as Whyte’s replacement is WBC heavyweight champion, Tyson Fury. In a ham-handed way, Hearn put it out there to his followers on Twitter, saying:

After the second biggest win of his career, last February against Deontay Wilder, Fury (30-0-1, 21 KOs) appears to be cashing out in looking to take an easy fight on December 5th before facing Anthony Joshua in early 2021.

It’s a predictable move by Fury, who seems to lose focus and drift after picking up huge wins. We saw that after Fury’s win over a shot, Wladimir Klitschko in 2015. Instead of putting things in proper perspective about being an over-the-hill 40-year-old Wladimir, Fury got into the celebratory mode and just sat on haunches for the next 2 1/2 years, making more of the win that what was really there.

The loss of motivation, the disinterest in taking risks, and now just looking for the easy way before he likely disappears from boxing following his two-fight deal with Joshua in 2021. 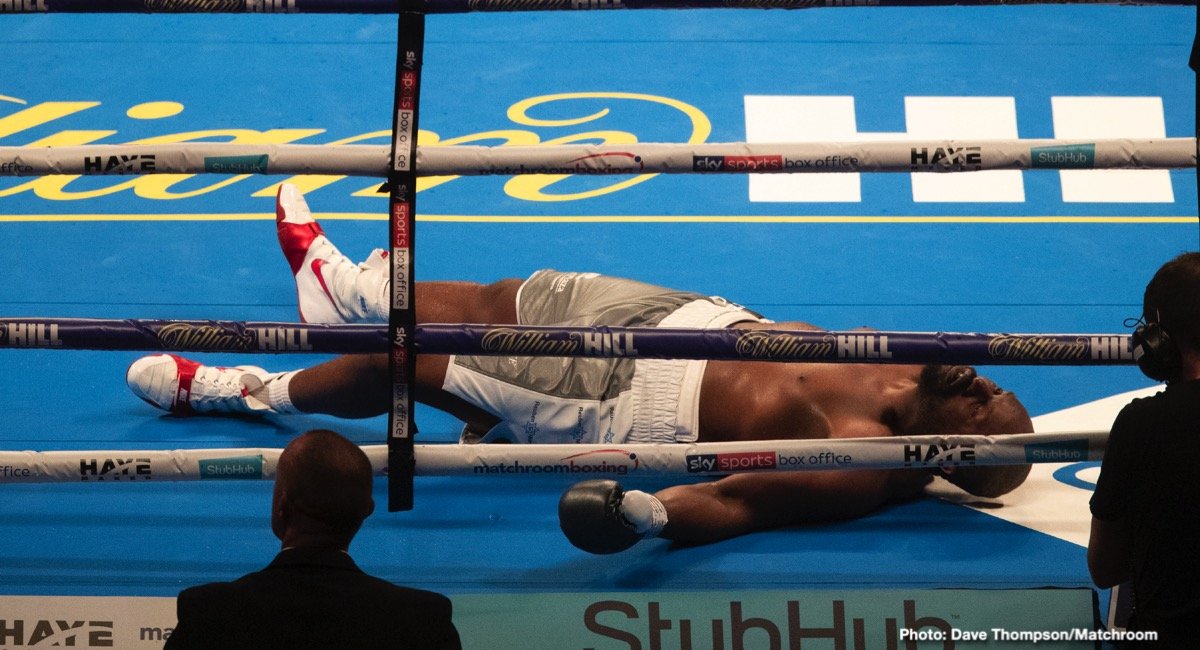 “No, you are not ready. You are trying to con the public. No one wants to see you go to sleep again,” said Whyte on social media in letting Chisora know that he’s not interested in using him as a replacement opponent for his November 21st fight.

Well, there it is. Whyte, 32, is letting Chisora that he’s not even in the same galaxy as him as far as being considered for a fight. Charles Brun can’t say that he’s surprised in the least.

As bad as Whyte looked in his last couple of fights against Povetkin and Oscar Rivas, no way is he going to risk his neck fighting a hungry Chisora. Whyte wants to make sure he gets to his rematch with Povetkin (35-2-1, 25 KOs) in one piece without suffering another loss.

Chisora would have a decent chance of beating Whyte, especially if his punch resistance has been impaired from the vicious knockout he suffered at the hands of Povetkin just three months ago on August 22.

It’s an insane move on Whyte’s part to return to the ring so soon after being knocked out by Povetkin. You have to wonder why the British Boxing Board of Control didn’t step in to block the Povetkin vs. Whyte 2 rematch.

But now that fight is off the table; it’s still just as risky for Whyte to face someone with even a shred of power.

Whyte appears to be in the non-risking, safety-first mode as Tyson Fury, which explains why he doesn’t fancy a fight against Chisora on November 21st.

Haye makes his push for Whyte vs. Chisora III

“So, Matchroom is desperately searching the universe for a heavyweight that is pay-per-view worthy, is in shape for 12 rounds, and is ranked high enough. The options are limited, but Dereck Chisora [is willing to step up].

David is wasting his breath trying to convince Hearn and Whyte to use Chisora, 36, as the replacement opponent for November 21st. It’s not happening. If Whyte does fight on that date, it’s going to be against a punch-drunk bottom feeder with just a ghost of a chance of winning.

The talented, well-respected contender Michael Hunter has already volunteered to take the fight with Whyte on November 21st, and he says he’d even fight him for free.

Nevertheless, Hunter (18-1-1) isn’t expected to be considered by Hearn for the fight because he’s too risky for Whyte and would have an excellent chance of beating him.

Chisora is too dangerous for his own good for him to get the trilogy match against Whyte on November 21. We already saw that Chisora has Whyte’s number after arguably being robbed in his first fight with him in 2016 in losing a highly controversial 12 round decision.

In the Whyte-Chisora rematch in 2018, Chisora got the better of Whyte, but the referee inserted himself into the equation in tice docking Dereck for points. After the second point deduction, an angry Chisora started fighting like a wild man, throwing shots without thinking. 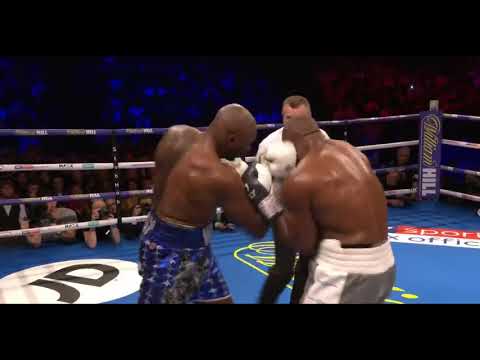 Dillian stayed calm and knocked Chisora out with a left hook. But the fight likely would have had a different outcome if the referee didn’t take points off from Chisora twice. It looked like Chisora was fighting two people on the night, Whyte and the referee.

“If the fans want to see him in two and a half weeks have a trilogy with Dillian Whyte, he good to go,” Haye said in continuing to push for Chisora as the replacement opponent.

“Let me know what you guys think. Maybe I’m a bit biased. I’ve been hanging around Dereck too long,” Haye said.

“I want to see the [Whyte vs. Chisora III] fight as a fan and a manager. Dereck wants the fight because he wants to fight anyone that the fans want. So you guys let me know what you think,” said Haye.

Poor Haye, he doesn’t understand that it’s not the fans that will decide on who Whyte faces on November 21st if anyone. It’s going to be Whyte and Hearn that come up with the opponent. The boxing public has nothing to do with decision-making.

It’s almost a given that Whyte will face a bottom-feeder on November 21 if he stays on that date. It won’t matter that the fight will still be sold on Sky Box Office.

The UK boxing fans have already shown that they’re willing to pay to watch Whyte fight nobodies on Box Office in the past, so that’s not likely to change. 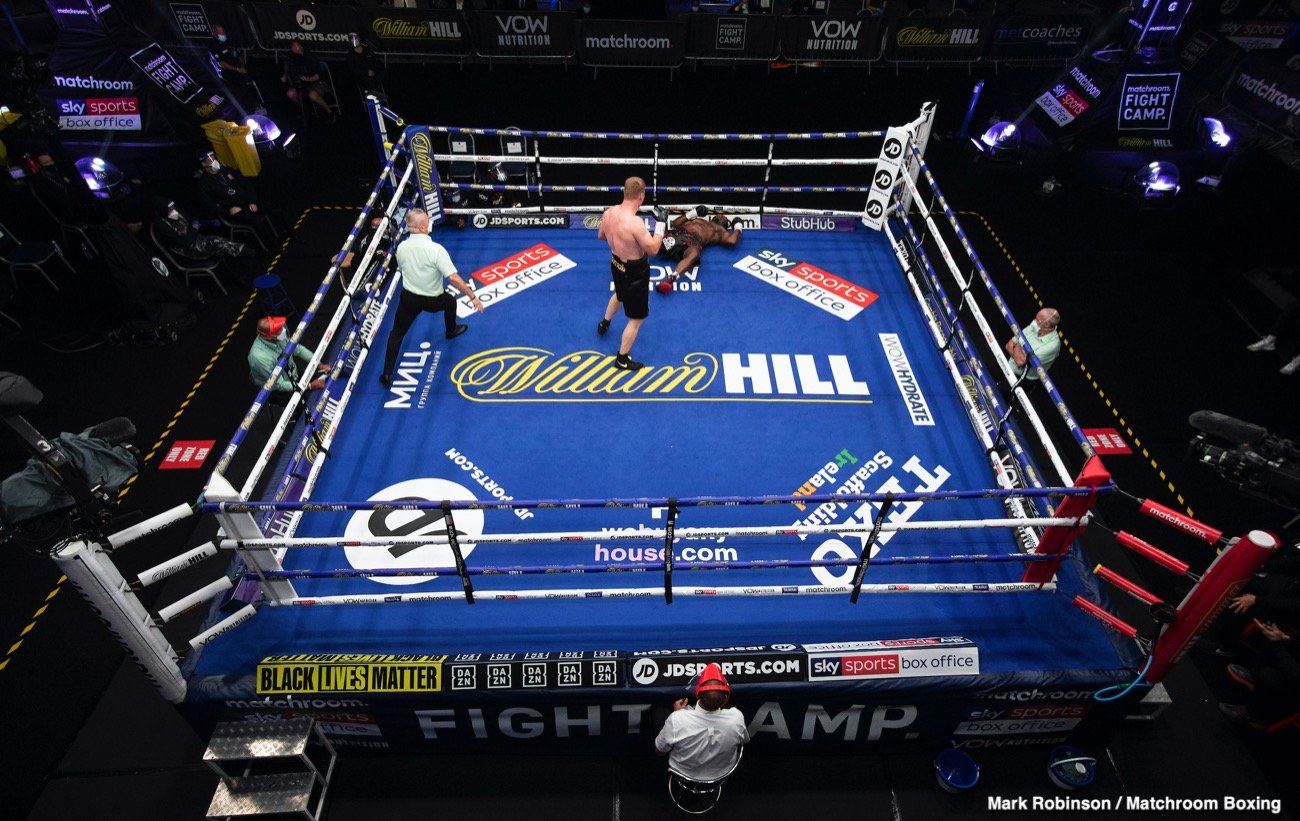 It won’t be surprising if Whyte’s November 21st replacement opponent comes from this list: