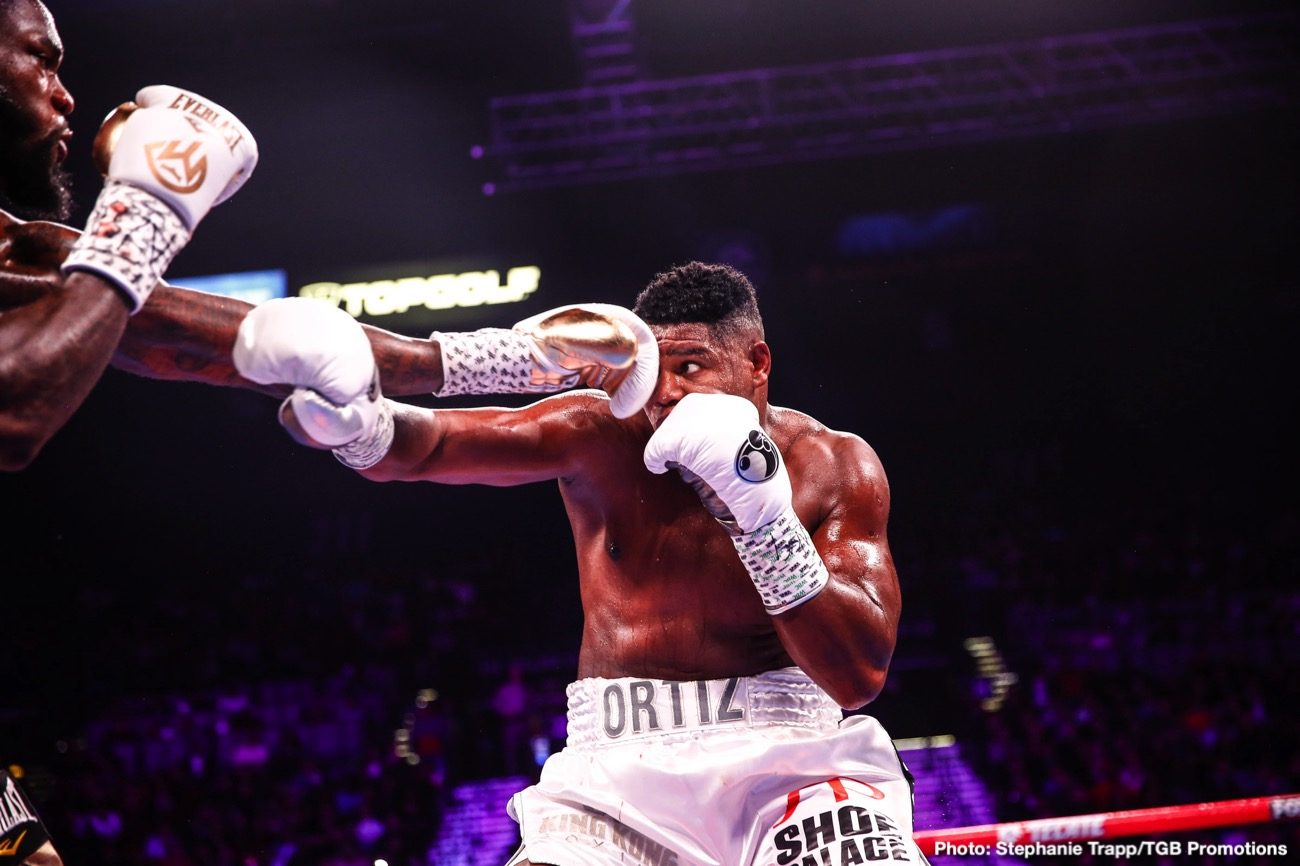 The event will be promoted by TGB Promotions and will occur without fans in attendance at the Microsoft Theater, an AEG venue in downtown Los Angeles.

Here is what Flores had to say Tuesday about training camp, his matchup with Ortiz, both of their places in the heavyweight division, and more:

“Training camp has been going really well. I’m always in shape year-round. We were already aiming for a November fight, so when this fight against Ortiz presented itself, we jumped on it. We’re ready to take advantage of this opportunity.

“I got the call about Ortiz over six weeks ago. I just had to adjust to southpaw sparring, but everything else kept going smoothly. It was tough to find sparring during the pandemic, but I was blessed to find some great quality southpaws to work with.

“Ortiz is a great fighter. He’s still one of the most feared men in the division. A lot of the people on his level don’t want to fight him. His only losses coming against Deontay Wilder says everything about his quality.

“Whenever you fight at that caliber that Ortiz has been at, I know you’re going to know what you need to do in training. But, the older you get, the harder it is to recover. It doesn’t get easier. Maybe his age will show up Saturday night.

“I thought Ortiz was beating Wilder in the second fight. I think he just relaxed at the 10-second mark and got caught with that straight right hand at the end of the round.

“I do think Ortiz may be overlooking me. I’m just focused on what I can control. I know that one day I might not get these opportunities anymore, so I have to jump all over this one.

“Beating Ortiz will put me up with the top heavyweights. I think a win is going to definitely lead to a world title fight sooner rather than later.

Unbeaten rising contender Frank “The Cuban Flash” Sanchez is determined to send a message to rest of the heavyweight division when he takes on Brian Howard in the co-main event of FOX PBC Fight Night and on FOX Deportes this Saturday, November 7 from Microsoft Theater in Los Angeles.

“I want to show that I’m the best heavyweight in the world,” said Sanchez. “I’m happy with the way that my career is moving along. I have great power, great speed and the division will have to take notice after this fight. My foot and hand speed is unlike any other heavyweight, and I have much better technique than anyone else in the division.”

The 28-year-old Sanchez has continued to work with renowned coach Eddy Reynoso in San Diego, California as he seeks another win to help his ascension up the heavyweight rankings. Despite the pandemic, Sanchez hasn’t felt any hindrance to his training camp regimen.

“Training with Eddy Reynoso in San Diego has been perfect,” said Sanchez. “There really hasn’t been any difference with the pandemic. It’s a very normal training camp and we’ve been getting a lot of sparring in with a number of different fighters. I’ve even sparred with Canelo Alvarez, who hits like a heavyweight. So, it’s been really strong preparation for this fight.”

A highly decorated amateur originally from Guantanamo, Cuba, Sanchez believes that he has the skillset and dedication to become the first heavyweight world champion from his home country.

“That’s the dream that I am working toward,” said Sanchez. “It would be extremely important for Cuba and for me personally. That’s why I’m working so hard. Because I want to the be the first heavyweight champion that Cuba’s ever had. I have none of the vices outside of the ring that have held back other fighters. All I do is train, train, train and fight. This sport is my whole life.”

On November 7, Sanchez’s latest obstacle will come in the form of the Georgia native Howard. Howard has spent most of his career fighting in the cruiserweight division, before making his heavyweight debut with a first round knockout of Puerto Rican Olympian Carlos Negron last year. Although Howard’s past at a lower weight class could help his ability to create an agile target for Sanchez, it is nothing the unbeaten fighter isn’t confident he will overcome.

“I’ve watched a number of Howard’s fights,” said Sanchez. “He has good power, but I don’t think he’ll be able to handle my power. I think I’ll win inside the distance. I’m a solid, full-fledged heavyweight. My skill level is too high for Howard. His movement won’t matter because I do everything better than him.”

Unbeaten heavyweight Michael Coffie gave insight into his training camp, his past in the Marine Corps and more as he prepares to take on hard-hitting Joey Abell in FOX PBC Fight Night action and on FOX Deportes this Saturday, November 7 from Microsoft Theater in Los Angeles.

“Training camp has been going really well,” said Coffie. “My head coach Josue Aguilar has been getting me ready to show off all my skills. We’re at the Orange Avenue Gym in Orlando, Florida just making sure that we haven’t left any stone unturned. We’ve had to adjust some ways because of the pandemic, but it’s nothing that everyone else hasn’t also had to deal with.”

A Marine Corps veteran, Coffie picked up the sport less than five years ago after returning from overseas. After a brief amateur career that saw him put on standout performances at the New York Golden Gloves and Metro Championships, Coffie has helped bridge the experience gap through sparring top heavyweights.

“I think my unorthodox career path has helped me,” said Coffie. “I didn’t spend a lot of time in the amateurs, but I learned a lot sparring top fighters such as Deontay Wilder, Tomasz Adamek and Jarrell Miller. I got so many rounds in during those sessions that it more than makes up for my limited amateur career.”

In addition, Coffie believes that the values and training gained in the Marines has helped him both physically and mentally in pro boxing.

Coffie impressed in his last outing, dropping the previously unbeaten Luis Pena multiple times before ending their fight in the fifth round of action that was featured on FS1.

“I got to show off my punch angles and my old school craftiness against Pena,” said Coffie. “I showed that I can fight with either hand, from any stance, low to high or high to low, and all of that is inside of a 280-pound frame.”

On Saturday night, Coffie will go up against the extremely experienced Abell, who has faced the likes of Tyson Fury, Tomasz Adamek, Oscar Rivas and Chris Arreola throughout his career. Despite that, Coffie believes his performance will leave no doubt that he can navigate any experience gap he comes up against.

“I know that he’s got a lot of experience,” said Coffie. “He’s been in there with a lot of notable guys. He is a veteran, but what I lack in experience, I make up for with maturity and poise. You’re going to see a smart fighter who hits hard. You won’t be able to tell who the more experienced fighter is.”