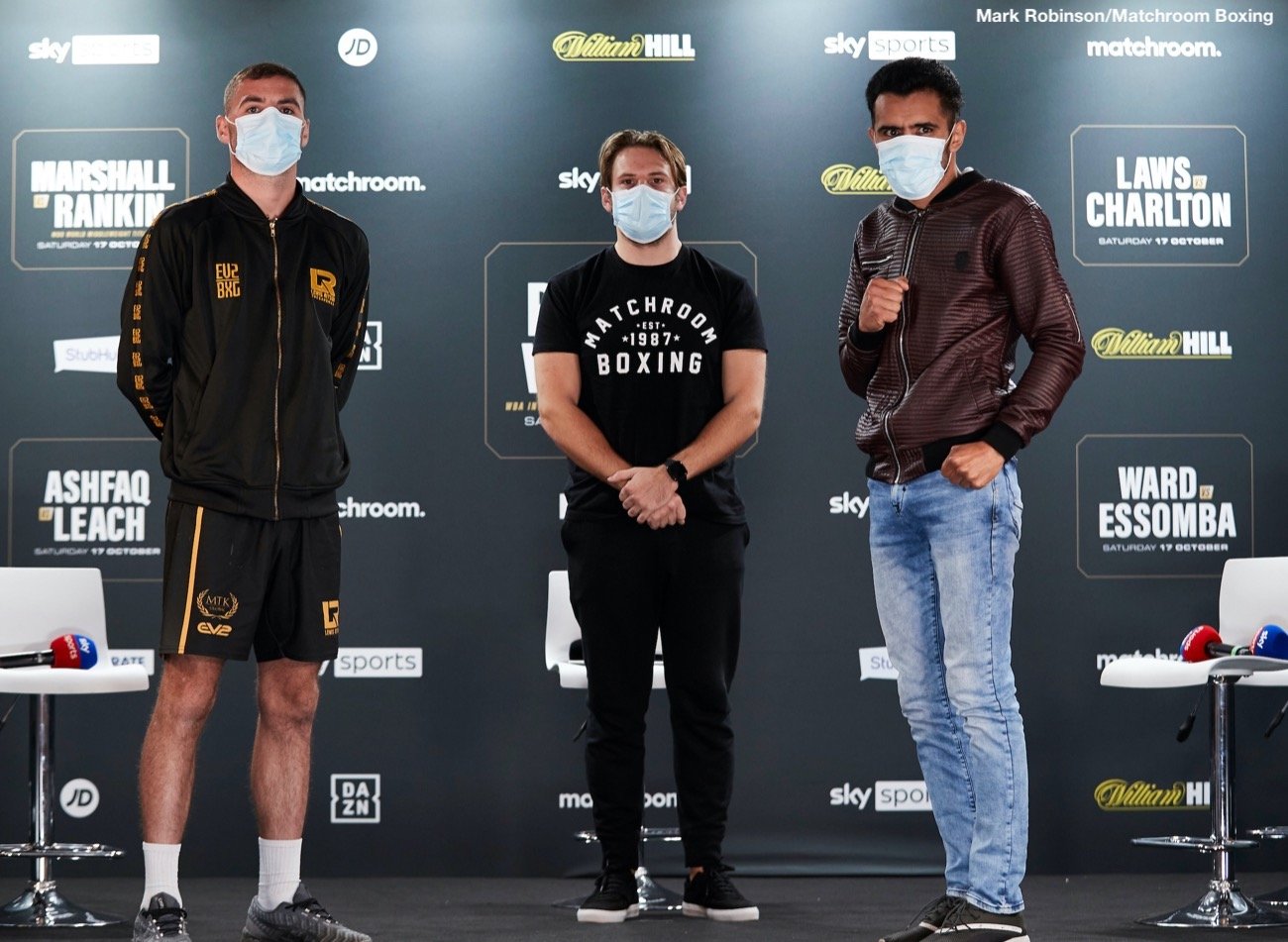 “We need to get past Vazquez, he’s our main focus. We’re not looking past Saturday. If we can get past him, and we’re confident that we can, then we’ll start looking at those other big names. I think I’ll put an even better performance on behind closed doors with no pressure on my shoulders. When I first saw him at the first press conference, I thought he looked massive. Now he looks quite skinny, quite frail, to be fair, but we’ll see on Saturday night what he comes to bring. We know that we’ll bring our A-game.

Asked if he is nearing world class, Ritson said: “Very close. Sparring is sparring, it’s totally different when you get in there and fight, so you can’t really take much off sparring, but if you did off the sparring, we’d be very happy with where we are and where we can end up. Get past this, hopefully the lockdown eases down, and we’ll get back to Newcastle and in front of a packed crowd and some big fights to come.”

“We have been training for this fight for a long long time. Obviously it got delayed, but we have been ready for this fight for a long time and I’m up against a really tough fighter in Lewis Ritson. It is a great opportunity for me. It is a really big fight for me and it’s not going to be an easy one at all which is why I have been preparing as hard as I possibly can for this. When people watch the fight they can expect to see a Miguel Vazquez that is prepared to go on to become a World Champion again. I’m ready to win. All the fights that I’ve had have enabled me to get to where I am now. It was a great experience fighting against Canelo. But all of the people I’ve faced during my period as World Champion as well were important for my career.”

“It has been amazing. I feel like I’m coming on leaps and bounds with Angel Fernandez and the team in Loughborough. I’m looking forward to showing what I’m about on Saturday night. Get this fight out of the way on Saturday and get a good stylish win, and then move on and win that British Title. I’m part of a fresh new team, coaching as well as management. I believe it has freshened me up in many ways and I’m learning things that are going to show on Saturday. I look forward to showing the improvements. The management team will drive me in the right direction. I’m learning a lot in the gym now. My improvements in the gym have been huge. The facilities at Loughborough University are unbelievable, we have everything that we need.”

“We’ve sparred each other over the years so we know a bit about each other. I’m just going to take every round as it comes and perform to the best I can. I feel a bit stronger. As everyone knows, the last two or three pounds is the hardest to make. I haven’t had to do that this time so I’m feeling fit and strong. I can’t wait now. Jamie is my coach and he had the British Title. I’m bringing it back to Salford where it belongs. My weight or the weight above, I just need the opportunity to fight on shows like these. Thanks to Qais and everyone else for accepting it. It’s going to be a bit cagey as we know each other so well but I think I’ll win on points.”

“I’m going to knock him out, flatten him. I’m a product of where I come from. But sometimes, at the weekends, it can be too comfortable to nip out and see my friends. I’m at a stage of my career where the fights will start getting harder. Lanzarote takes me out of my comfort zone.

“I’m a passionate kid. If I box, fight or play scrabble I am a passionate kid. I’m going to flatten him. I’m throwing with intent to hurt. He’s training to knock me out, know what I mean? Once I get in the ring, it’s personal. Come Saturday I will show no respect whatsoever.”

“He’s good at doing the talking, I’m good at doing the beating up. There isn’t much pressure on me. Joe is used to having a crowd behind him and there won’t be a crowd. All the pressure is on Joe! I’m going in there to do a job and this the opportunity I’ve been waiting for.”

“I’m ready to go. Obviously there was a change of opponent but our training regime doesn’t change at all. It doesn’t matter who we’re fighting, we train hard, give 100% and remain ready and focused. I’m ready to go on Saturday night. Every fight has to be won. It doesn’t matter what the calibre of the opponent is. I was supposed to fight Garcia who is ranked in the WBO. That would have pushed me on to get a World Title shot. We’re still pushing for them World Titles. I believe I’m ready to fight any of those World Champions. I believe I’ll beat any of them. I’m ready to take on the full division but we’ve got a fight on our hands on Saturday night.”

“First of all I want to say thank you for the opportunity. I fought as recently as August. I think that will help me in this fight. I didn’t expect to fight this soon after that. The notice they gave me was very short but I believe the camp I had for my last fight is going to help me for this fight. I will find the solution to win. Every fight is important for me. The opportunity to fight Tommy is a big one for me.”

“I’m just grateful to be given this opportunity in the circumstances. To be around those people in the gym, I’m learning outside of boxing. I’m trying to be a sponge to everything in that gym and I’m thankful to be there. In hindsight it seemed like a tough decision turning pro but I’ve never looked back once. My character and my boxing, it just wasn’t settling well there and I just didn’t love boxing like I use to. As soon as I made the decision to turn pro I fell in love with it again. I’m getting my journey started. As soon as I box on Saturday I’d like to be out again the next week! It’s a great time to be involved in women’s boxing. As soon as I get started I want to keep going.”

“It’s quite exciting isn’t it. I didn’t think with all of this COVID stuff this year that I’d get to box at all. It’s a massive change on the management side of things, I’d been with Paddy for the best part of ten years. I’m with Mike in Malmesbury now with new management as well in Al Siesta. I can’t see small hall boxing coming back for a long time with this COVID stuff so it’s time to do the big shows. Experience is only good if you use it, and I plan on using it on Saturday. She’s not your typical debutant and I think people in boxing know that already. Ellie has got a lot of accolades behind her. Inactivity as a boxer is a killer. You want to be busy and you want to be out there. This is a great platform to be on and I’m just really grateful that it’s happening.”

Lewis Ritson: “The Extra Preparation Has Improved Me As A Fighter”

Lewis Ritson believes the extra few months graft in the gym locked away with trainer Neil Fannon will pay dividends in the long run.

The Geordie puncher has felt the knock-on effects from the pandemic, which ruled out his planned fight with Miguel Vazquez twice, back in April and then again June, but he insists the extra preparation has taken his game to the next level.

“It has probably benefitted me more than most other fighters,” said Ritson. “It has really allowed for us to gel and work on other areas of our game. Rather than wondering when a fight date may drop, despite the cancellations we have always had an end date in mind which has allowed for me to stay disciplined and sharp throughout.

“I’ve been in the gym the full year training hard and staying ready for whatever happens next. The start of lockdown gave me a chance to slow the pace down a little bit and work on a lot more of the technical stuff. I feel like I’ve improved a couple of levels compared to how I boxed against Robbie Davies Jr. We knew that we would get a new date confirmed eventually, we just had to stay in the gym.”

Currently ranked number two with the WBA, Ritson finds himself on the cusp of a shot at World honours and believes this Saturday’s Super-Lightweight showdown against former long-standing IBF ruler Vazquez, shown live on Sky Sports and DAZN, is the perfect bridge to the next level.

“If I bring my A game, I’ll be too much for Miguel and will stop him. I think he’s probably a little bit on the slide whereas I’m still on the way up, so we’re meeting bang in the middle. This is the exact type of fight where I can gain more experience to move to the next step. He’s been there and done it. We know what he is all about and what he will bring.

“Beating Robbie proved I’m at that European level, now it’s time to prove I can go to the interim world level stage with a good win against Vazquez. That will pave the way for more big fights. We never take anyone lightly and we definitely haven’t taken Vazquez lightly. If I bring my A game, I’ll have more than enough to beat him.”

« Lomachenko vs. Lopez: Is Teofimo the toughest test of Loma’s career?