Lomachenko vs. Lopez: Is Teofimo the toughest test of Loma’s career? 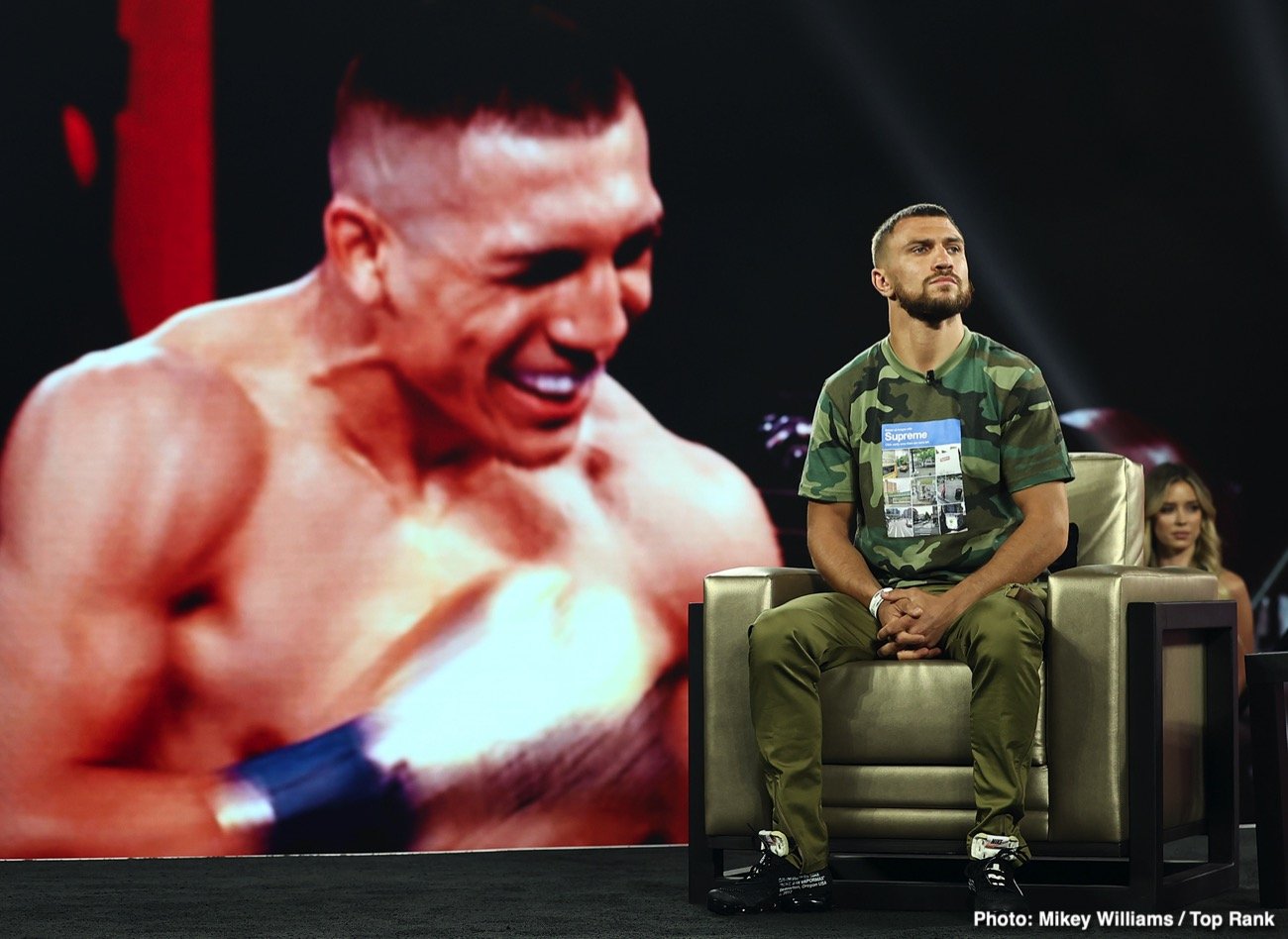 By Kenneth Friedman: The young lion Teofimo Lopez will be looking to Vasily Lomachenko and rip away his WBA, WBC [Franchise], and WBO lightweight titles this Saturday, October 17th on ESPN.

The two lightweight champions are two days away from meeting in front of 250+ people at ‘The Bubble’ in the MGM Grand in Las Vegas, Nevada.

Although Lomachenko (14-1, 10 KOs) has a number of victories over notable opposition during his seven-year professional career, they weren’t as talented or as big as Teofimo.

Lomachenko, 32, is taking his toughest opponent in a weight class that he’s not well-suited for. He’s fought for times at 135 since moving up to the division in 2018, and he’s not looked overly impressive.

‘Hi-Tech’ Lomachenko not dominating at 135

Lomachenko has won all his fights at lightweight, but he’s hard to work hard in three of the contests.

There was nothing easy about this fights against Jose Pedraza, Jorge Linares, and Luke Campbell. While Loma still looked mostly like the fighter of old, but he wasn’t the same dominating fighter he’d been in the past.

Lomachenko’s best wins of his career:

Former WBA super featherweight champion Nicholas Walters (26-1-1, 21 KOs) was undefeated at the time that he fought Lomachenko in 2016.

It was a good win at the time for Lomachenko because a lot of boxing fans were high on Walters due to his wins over Nonito Donaire. However, Walters was coming off of a controversial 10 round draw against Jason Sosa when he fought Lomachenko in November 2016.

Walters was out of the ring for 11 months before taking on Lomachenko, and he was clearly rusty and not at his best at the time.

Teofimo has the size, speed,, and power to win 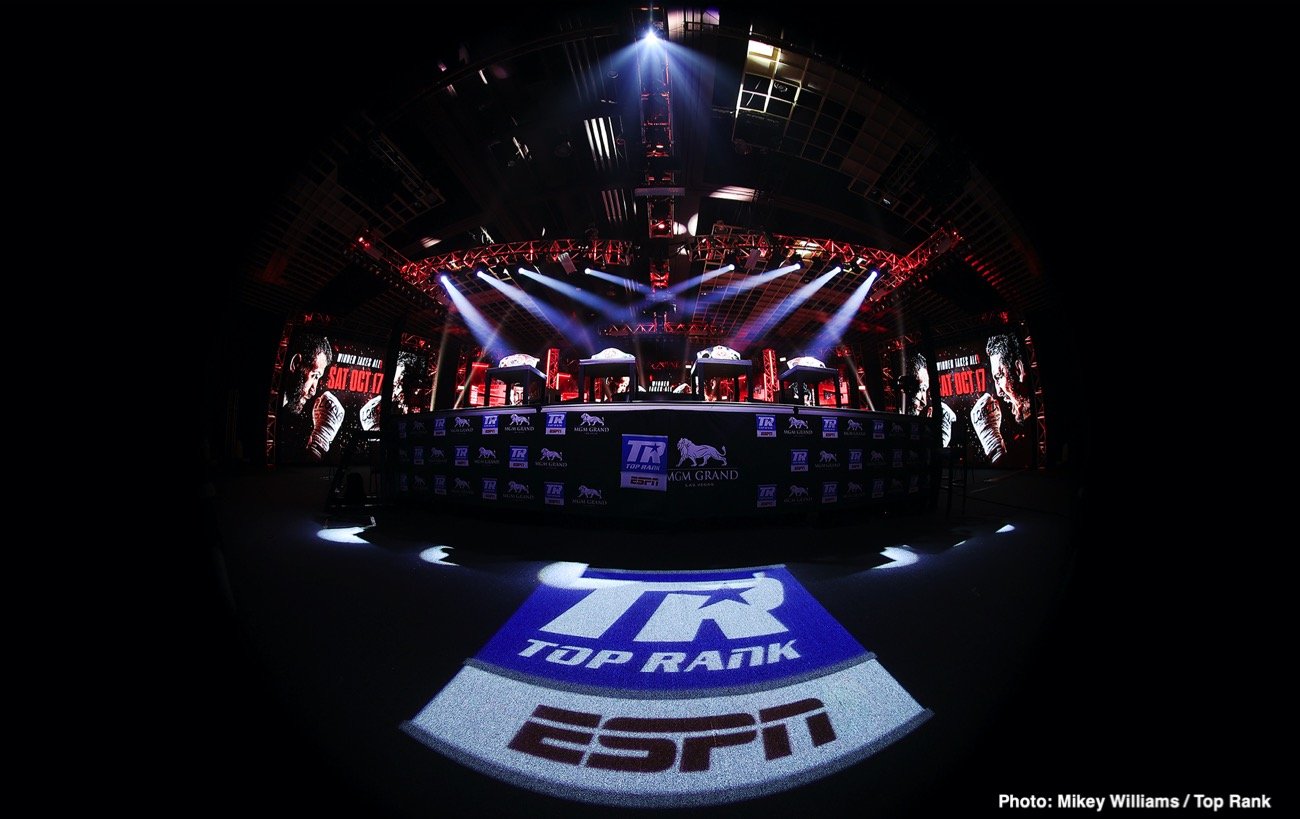 “One of the biggest fights of the year takes place this Saturday. Vasily Lomachenko, one of the biggest pound-for-pound takes on Teofimo Lopez in a lightweight unification fight,” said Chris Mannix to DAZN.

“Loma has won his four fights at lightweight, including a defeat of Luke Campbell in his last fight in the ring. Is Lomachenko vulnerable to you at 135 pounds?”

“No, and you just said he fought Luke Campbell, who is taller than Teofimo Lopez and has a longer reach,” said Sergio Mora. “Yeah, Lopez has more power, but power isn’t going to be enough with the footwork, speed, and pedigree of Lomachenko.

Campbell is a little taller than Lopez and has a longer reach, but he’s not the same type of talent. Luke is slower, weaker, older and a little bit chinny. We’ve seen Campbell get dropped several times during his career, and he’s not sturdy in the chin like Teofimo.

Lomachenko is vulnerable at 135 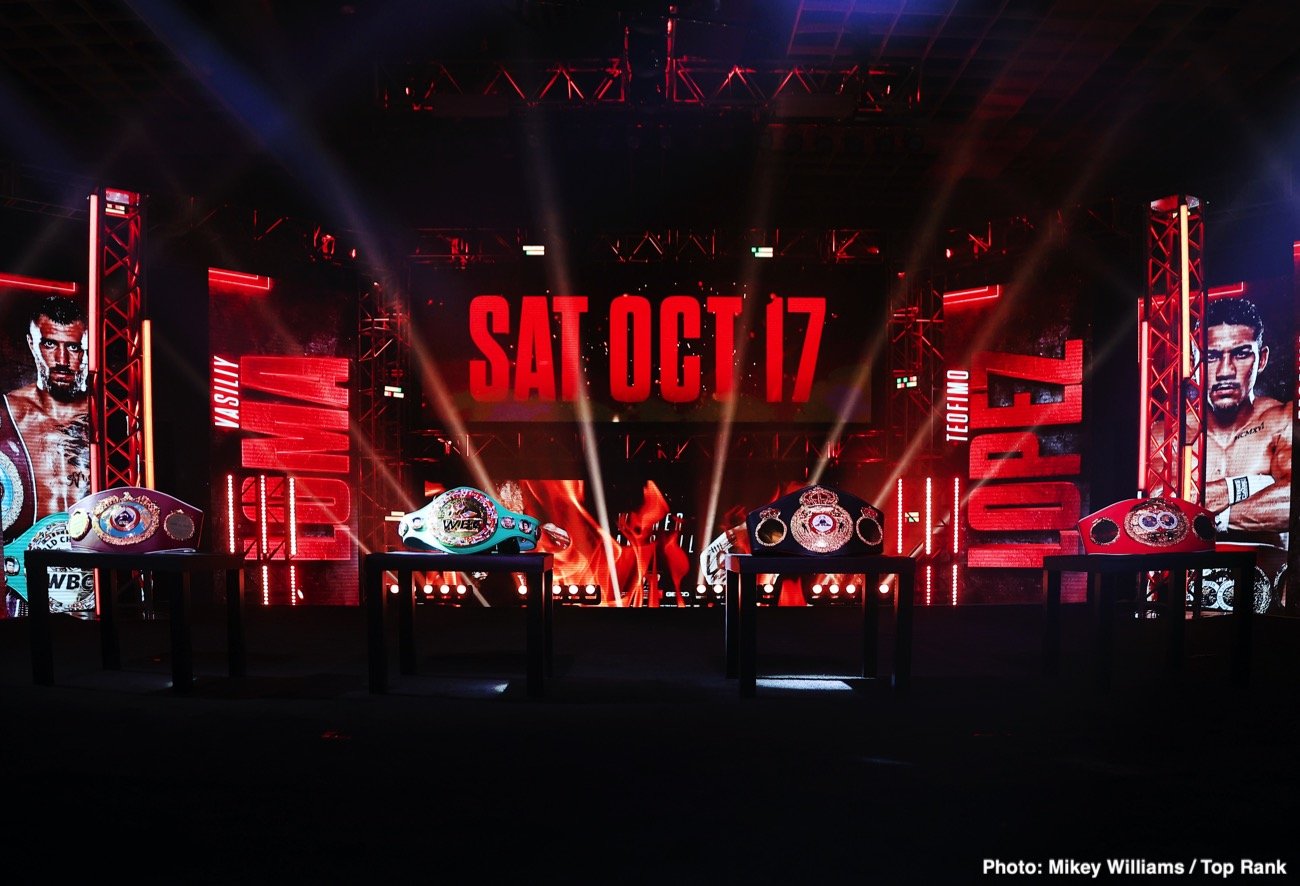 “He’s been tested a couple of times. He was knocked won by Jorge Linares in his fight. His toughest test physically has come at 135 pounds, and he’s getting in the ring with a guy [Lopez] that doesn’t have a lot of experience but has a lot of power.

“Teofimo Lopez is one of the bigger punchers in the 135- pound division. So if Lomachenko goes in with his onslaught of punches, he better be sharp defensively or else Teofimo, like he did with Richard Commey, has the ability to catch him.

“Look, anyone is vulnerable when you step inside the squared circle, especially when you’re moving up two or three weight classes like Lomachenko, but that’s what great fighters do.

“He’s on a different level and a different page. The power is going to be different, but like I said, power is not enough with footwork and defense.”

What we’ve seen from Lomachenko against Jose Pedraza, Luke Campbell and Jorge Linares is a fighter that is vulnerable at 135. Lomachenko is not the same fighter at lightweight compared to when he was fighting at 126 and 130.

Will this be Lomachenko’s best win?

“Vasily will be taking on Teofimo Lopez for the undisputed 135-pound championship,” said Mannix. “Lomachenko will be trying to run his record to 15-1 and try and continue to be considered one of the best pound-for-pound fighter in the world.

“Ahead of this Saturday’s match-up, he said that beating Lopez won’t be easy. Will this be Lomachenko’s best win?”

“No, I think Nicholas Walters was the biggest win of Lomachenko’s career,” said Sergio Mora. “Walters was 26-0 at the time, and he was knocking everyone out, Nonito Donaire to Vic Darchinyan.

“That’s going to be his biggest win. Against Teofimo Lopez, he was 15-0, for sure. He reminds me of a Fernando Vargas coming up. And he doesn’t have the names that Nicholas Walters had yet. He doesn’t have the big names.

“Walters was good but there was something going on with him at that stage of his career, though,” said Mannix. “He had a draw in his previous fight against Jason Sosa.”

It’s got to be the best win of Lomachenko’s career if he defeats Teofimo because none of the guys that he’s beaten in the past could deal with his talent.

The 5’4″ Gary Russell Jr is a good fighter, but he would be too small for the 5’8″ Teofimo, and he would be giving away too much size., speed and power. 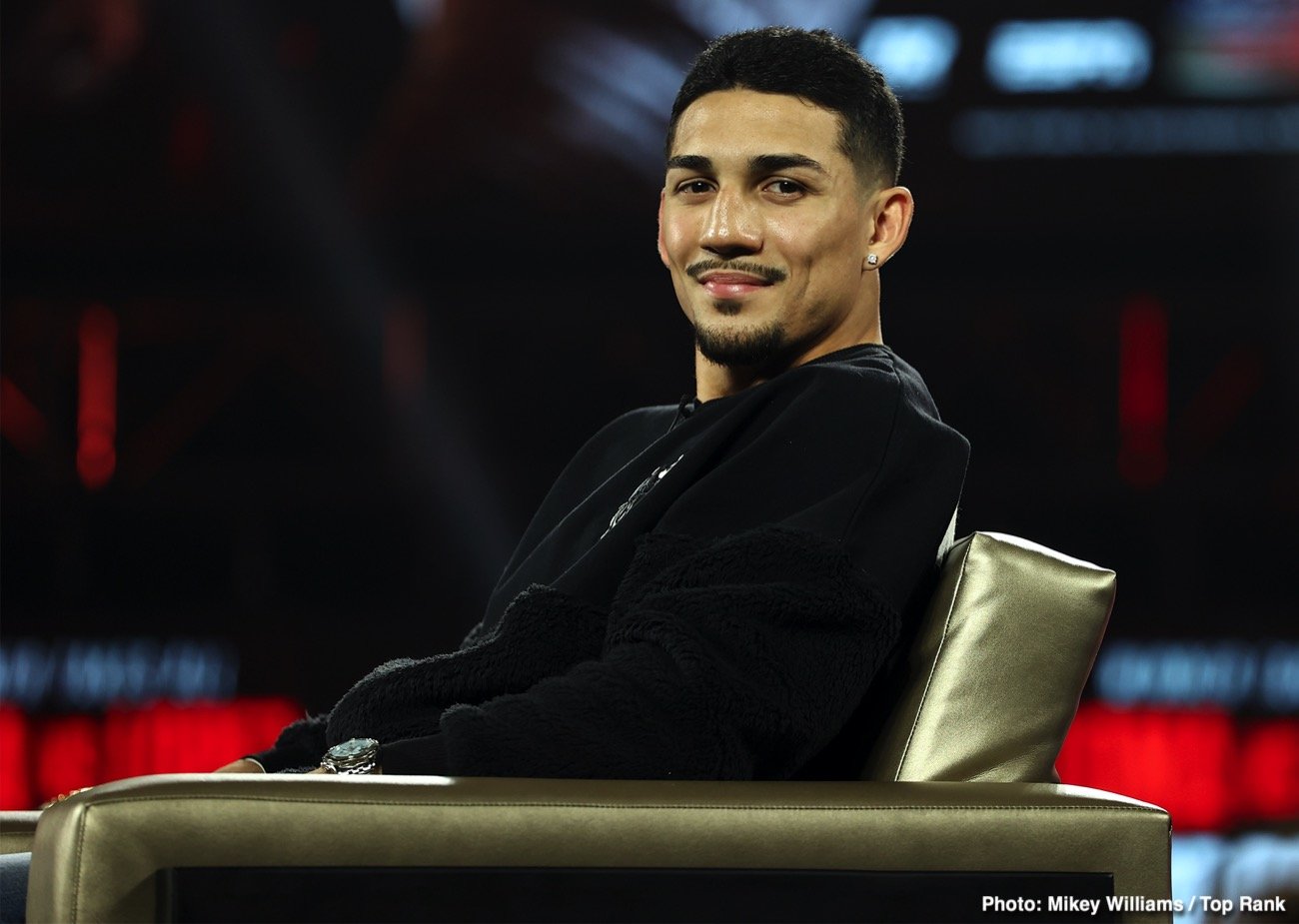 “I think the Gary Russell win [for Lomachenko in 2014] was excellent because Gary Russell at 126 pounds is very good, and Lomachenko completely blanked him,” Mannix said. “I do think. There are reasons to believe that this will be his [Lomachenko] most significant win.

“Lopez, despite his relatively young age, is a title-holder, is coming off the most significant win of his career against Richard Commey.

“And he [Teofimo] fights in a weight class that Lomachenko isn’t all that comfortable with. Remember, this guy [Lomachenko] is a natural 126-pounder.

“He moved up to 130 pounds to win titles in that weight division, and he moved up to 135 to do the same thing. But he is really stretching himself to get to 135 pounds.

“I think he’s taking on a young lion, just in the prime of his career with real lightweight power. I think he’s [Lomachenko] had some good wins in his career from Walters, Russell, and several others, but this to me would be the best.”

The guys that Lomachenko picked dup his best wins against were mostly smaller fighters, who didn’t have the power or the speed to keep up with him. Although Campbell, 5’9″, is an inch taller than Teofimo, he’s not as big as him, and he doesn’t possess his power. 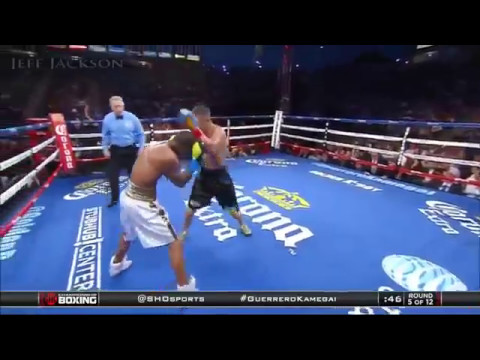 Lomachenko lost to Orlando Salido in 2014, and then had a difficult time beating Gary Russell Jr in his next fight. Russell was getting the better of Lomachenko until the second half of the contest.

That’s when Lomachenko began moving a lot, and that enabled him to cruise to a narrow 12 majority decision win. Still, Russell gave Lomachenko a lot of problems, and he came close to beating him.

If Russell had more power, he would have won. The size advantage that Lomachenko is what won the fight for him over Russell, as he was considerably bigger than him on the night of the contest.

Can Lomachenko force Lopez to quit? 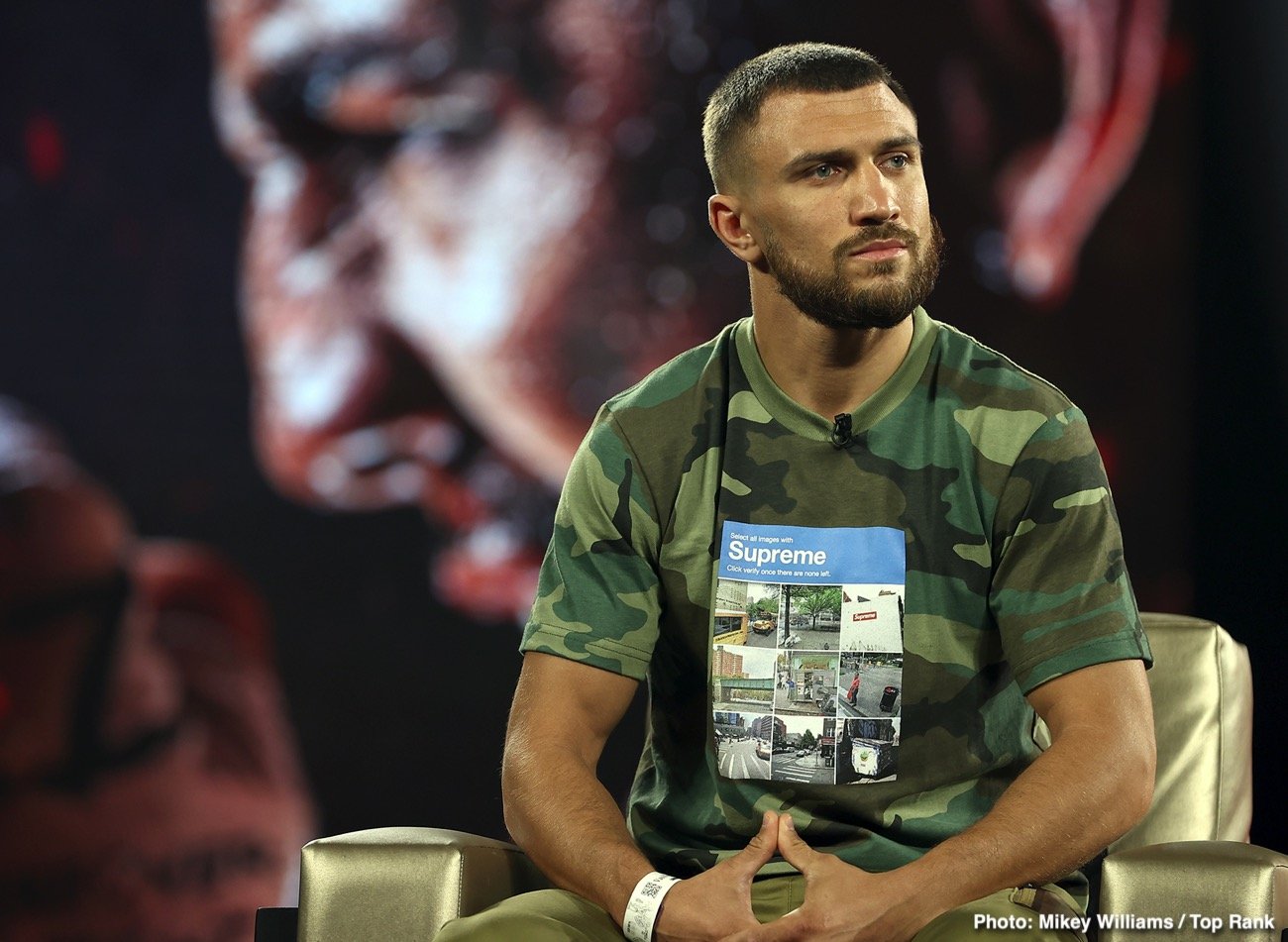 “I’m going to backup Lomachenko here,” said Mora. “He’s going to clean out another division, and I’m going to tell you how. He’s not a power-puncher. We know that. ‘Hi-Tech’ Lomachenko is a precision puncher.

“He beats you down with constant pressure, and he punches you up and down. But it’s the body shots against the bigger fighters. He was able to knockdown Campbell, and he hurt him to the body.

“And he knocked out Linares. He was able to beat down fighters to the body. So I think that’s what’s going to be the secret with Teofimo Lopez.”

“Lopez is a very good fighter, but we don’t know how he’s going to react to the pressure from Lomahenko,” Mora continued. “Not only physically, but mentally and with the footwork.”

“There’s a reason why he goes by ‘No Mas Chenko’ because he makes guys quit with a lot of pressure on them, and he beats them up to the body,” said Mannix.

“I just think at 135 pounds, it’s not a weight class that he’s physically great at. Lopez is probably going to be the biggest fighter of his career.

“Lopez is a big 135-pounders. So for me, this will rank right up there at the top of Lomachenko’s wins of his professional career.”

Lomachenko hasn’t forced anyone to quit since moving up to 135, and the reason for that is he can’t camp in front of his opponents to riddle them with shots.

He’s clearly not comfortable with the power from the lightweights he’s been facing, so he can longer force his opponents give up like he did in the past.

The last time Lomachenko forced one of his opponents to quit was three years ago in stopping super bantamweight Guilleromo Rigondeaux to give up in round six in 2017. 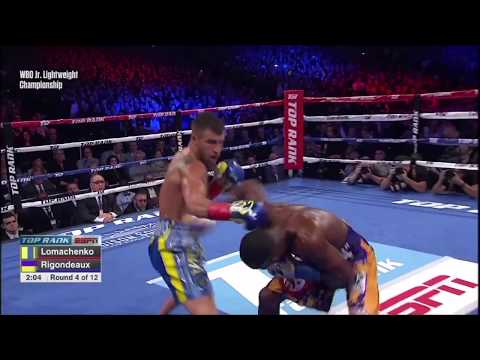 That was a fight in which Rigondeaux moved up two weight classes to take on Lomachenko at 130. Loma didn’t want to meet Rigondeaux halfway by fighting him at a catchweight, which resulted in him not getting credit for the win.


« Chris Byrd Back In Training!