Julio Cesar Martinez wants to unify at 112 before moving up 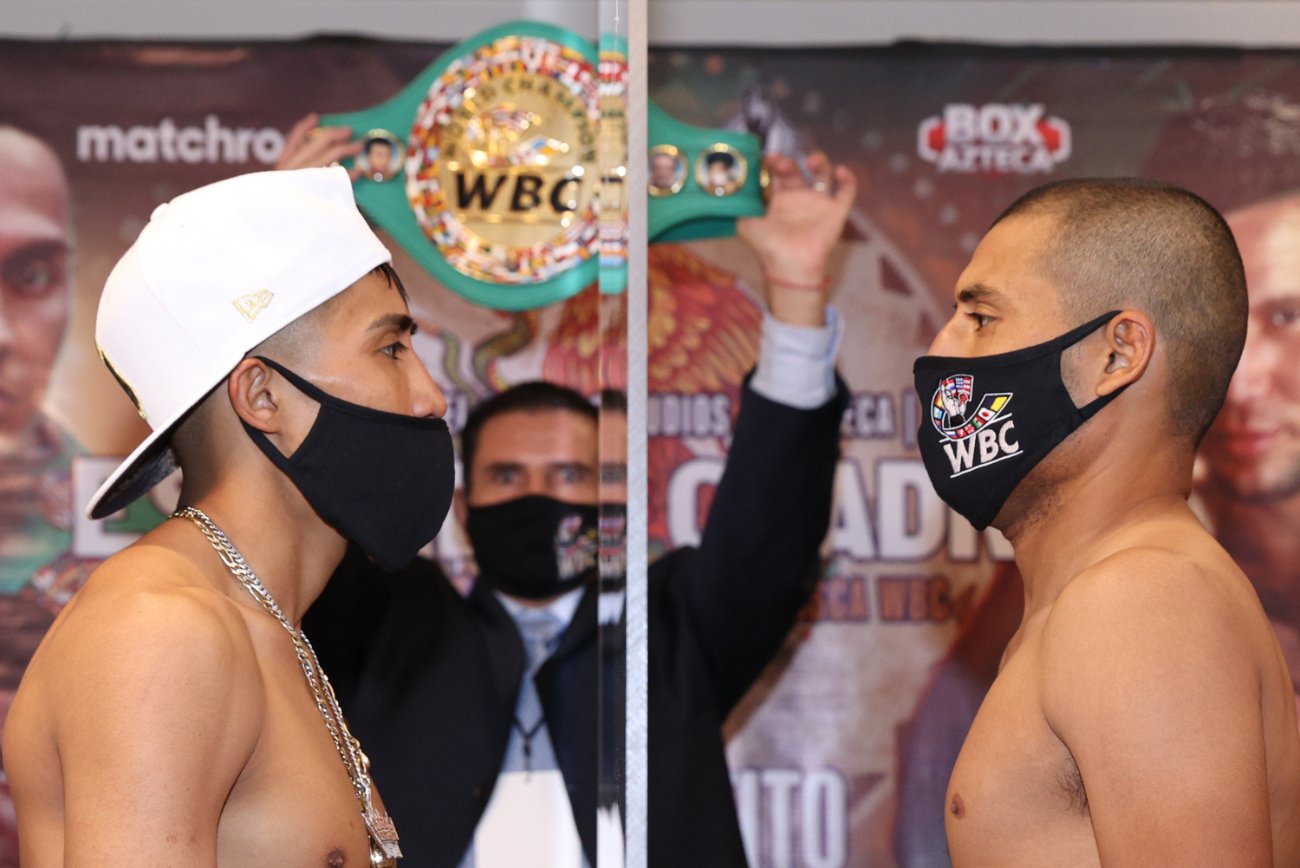 Julio Cesar Martinez has set his sights on unification battles in 2021 before moving to Super-Flyweight as the WBC World Flyweight king meets Moises Calleros tonight at TV Azteca Studios in Mexico City, Mexico, live on DAZN.

Martinez (16-1 12 KOs) fights for the second time as WBC king following his first defense against Welshman Jay Harris in Dallas in February having won the vacant strap with a ninth round KO in a thrilling shootout with former champion Cristofer Rosales in December.

Calleros (33-9-1 17 KOs) failed to make weight for the battle so cannot win the strap, but Martinez is still looking to impress and reignite the momentum he had going following his World title wins.

The 25 year old is eyeing battles with IBF champion Moruti Mthalane and WBA ruler Artem Dalakian in unification battles but admits that the lure of big showdowns with tonight’s fellow World title defenders Juan Francisco Estrada and Roman ‘Chocolatito’ Gonzalez could see him move to Super-Flyweight later in 2021.

“I would like to go up against Mthalane,” said Martinez. “There’s him, there’s Dalakian. Honestly, I will go up against anyone, anywhere. I’m ready to have my hand raised first thanks to God, because we’re going in with everything other than fear. We won’t disappoint, it will a great fight.

“I want to stay here a little while to get two or three more belts. But I want the biggest fights, so I’d want El Gallo Estrada and Chocolatito, big fights. But whatever comes. Maybe I have six more months and I’ll move up to Super-Flyweight before they run away from me.

“More than anything, I’m very happy and very excited to be fighting in my homeland. I’m just happy that, after my fight, I can go be with my family, with my wife, with my kids.

“I spent my whole training camp at the Centro Ceremonial Otomi. I’ve always said that I prepare with everything other than fear. I don’t train at 100 per cent. I train at 1000 per cent with my training Mauricio Aceves. We fight with whoever, wherever and we always give 100 per cent.

“We’re really happy that Eddy Reynoso and the rest of the guys have accepted us into that group. In that stable you have guys like Canelo, Andy Ruiz Jr, Ryan Garcia, Oscar Valdez ‘El Pantera’ Luiz Nery, they’re really all great friends. It’s really great motivation, anything is possible and we’re going into this fight with everything and for the fights to come, thank God.

Martinez (16-1 12 KOs) makes the second defense of his crown and his first on home soil, defeating Jay Harris in Dallas in February. The 25-year-old was due to face fellow countryman Maximino Flores, but the IBO champion returned a positive test for COVID-19 and will be unable to challenge Martinez’s green and gold strap.

Calleros (33-9-1 17 KOs) now has a golden opportunity to change his career overnight in Flores’ place. The 31-year-old landed the WBO NABO title at 112lbs last September and fought for World honors for the second time in his career, having traveled to Japan in March 2018 to challenge WBO champion Ryuya Yamanaka.

Martinez’s clash with Calleros is part of a bumper World title triple-header in Mexico.

Juan Francisco Estrada (40-3 27 KOs) will defend his WBC and Ring Magazine World Super-Flyweight titles in a rematch with Carlos Cuadras (39-3-1 27 KOs) and Roman ‘Chocolatito’ Gonzalez (49-2 41 KOs) defends his WBA World Super-Flyweight title against Israel Gonzalez (25-3 11 KOs) – with Estrada and Chocolatito on a collision course for a rematch should they both emerge victoriously.

WBC flyweight champion Julio Cesar Martinez is coming off one of the toughest fights of his career las February in beating previously undefeated Jay Harris by a 12 round unanimous decision in Frisco, Texas. Going into that match, it was thought that the knockout artist Martinez would destroy Harris, but it turned out to be a really tough fight.

The 31-year-old journeyman Moises Calleros (33-9-1, 17 KOs) has won his last four fights, albeit against weak opposition. Two years ago, Calleros challenged for a world title against WBO World minimumweight champion Ryuya Yamanaka, but he came empty in losing by an eighth-round stoppage. That fighter was out of Callero’s range and wasn’t able to compete.

Martinez is likely to obliterate Calleros at some point in the fight, but you never know. With Martinez’s nonexistent defense, none of his fights are easy. He takes a lot of shots in winning, and that’s something that will likely continue.

Martinez’s clash with Calleros is part of a huge fight night in Mexico City, topped by a triple header of mouthwatering World title action.

Juan Francisco Estrada (40-3 27 KOs) defends his WBC World Super-Flyweight title in a rematch with Carlos Cuadras (39-3-1 27 KOs) and Roman ‘Chocolatito’ Gonzalez (49-2 41 KOs) defends his WBA World Super-Flyweight strap against Israel Gonzalez (25-3 11 KOs) – with Estrada and Chocolatito on a collision course for a rematch should they both emerge victorious.