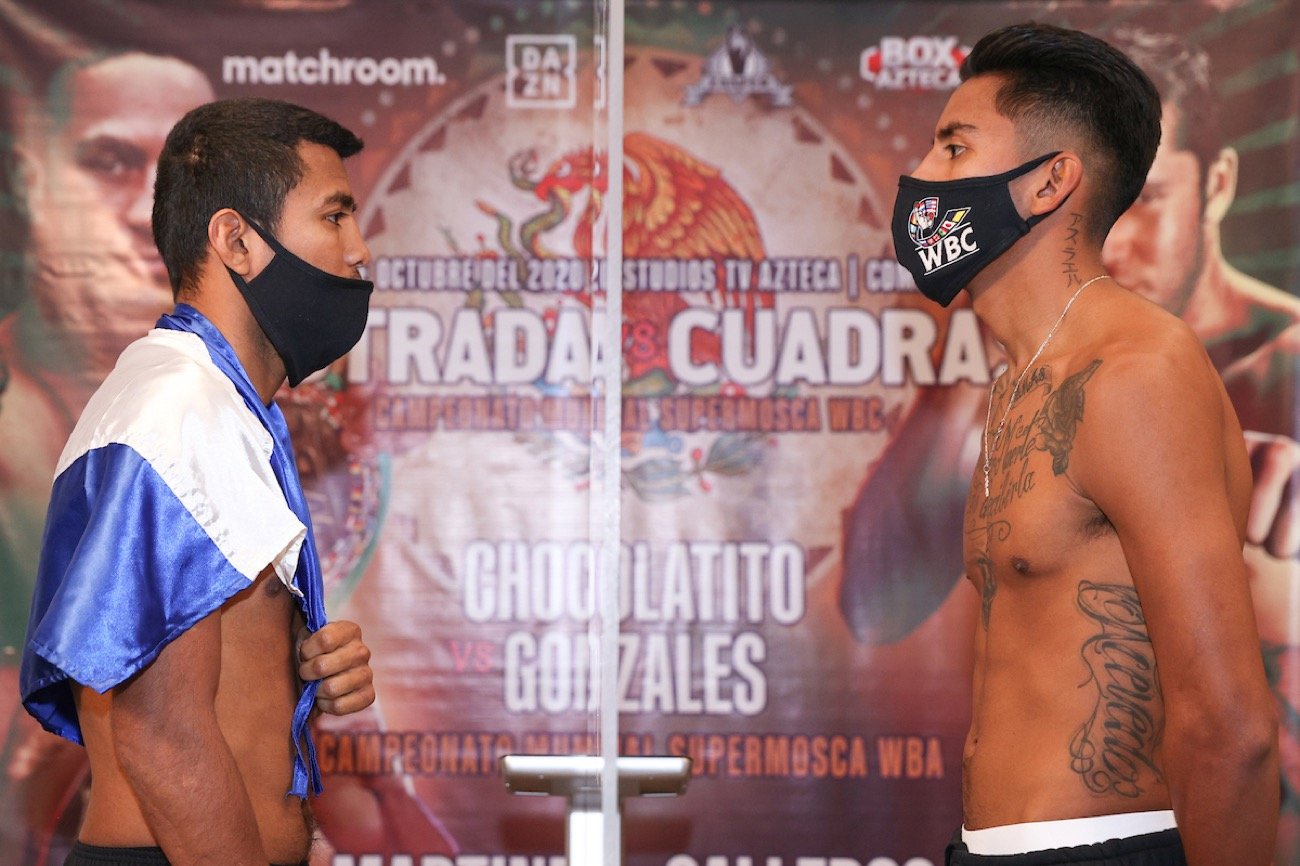 Israel Gonzalez believes he has the boxing IQ to beat WBA World Super-Flyweight champion Roman ‘Chocolatito’ Gonzalez as they clash for the belt live on DAZN tonight from TV Azteca Studios in Mexico City, Mexico.

Gonzalez (25-3 11 KOs) is hoping it’s third time lucky in World title fights having fallen short against Jerwin Ancajas in February 2018 for the IBF strap and then Kal Yafai nine months later for the WBA belt.

Chocolatito ripped the title from Yafai in Dallas in February with a ninth round KO underscoring a dominant performance by the former pound for pound king. The carrot of a rematch with Juan Francisco Estrada dangles over the evening with both champions putting their belts on the line, as WBC king ‘El Gallo’ meets Carlos Cuadras in another rematch.

But 23 year old Gonzalez is confident he will rip up those plans and is relishing the chance to go up against the vastly experienced Nicaraguan, believing he can outwit the 33 year old and land the World title.

“I’m excited, I’m ready and I think it’s the opportunity of a lifetime, the fight of my life,” said Gonzalez. “I’m going up against one of the best pound for point fighters in the world at the smaller weights. It’s an opportunity that I can’t waste and I’m ready for this fight, I’m sure that it’s going to be my night.

“I think my intelligence will be the key in the fight, my intelligence in the ring. Knowing how to use my timing and use the distance and to fight an intelligent fight against Roman, who is also very intelligent. I think that will be the main factor, not to pressure myself, not to get hit with too many punches – hit and not get hit.

“I’ve watched his fight with Yafai a few times. I get a lot out of watching it; I don’t think Yafai looked great, I didn’t see him very concentrated in the fight and I think that made things easier for Roman. My style is completely different from Yafai, so this will be a very different fight.

“I’ve been through similar things before, different fighters like Yafai before facing them, they were already looking ahead to other fights, and it hasn’t gone well for them. In don’t think this will be an exception. Tonight, we will show them they’re doing things wrong and should be looking at what’s in front of them.”

“I don’t like to make predictions but I just can’t wait for the fight. I want to show all the work I’ve put into training. I guarantee it will be a good fight, I don’t doubt that it will be my night and I have no doubt I will become World champion.”

CHOCOLATITO: YAFAI WIN MAY BE MY PROUDEST MOMENT

Roman ‘Chocolatito’ Gonzalez defends his WBA World Super-Flyweight title against Israel Gonzalez tonight at TV Azteca Studios in Mexico City, Mexico live on DAZN – and says his win over former champion Kal Yafai is one of the proudest of his glittering career.

Chocolatito (49-2 41 KOs) handed Yafai a first career defeat with a dominant performance in Dallas in February with a ninth round KO to return to World champion status for the first time since losing his WBC strap to Srisaket Sor Rungvisai in March 2017.

The Nicaraguan is heading for a rematch with WBC ruler Juan Francisco Estrada should he beat Gonzalez and ‘El Gallo’ gain a second win over Carlos Cuadras, and the 33 year old is proud of his performance against Yafai for setting up the possibility of a blockbuster second clash with the Mexican in 2021.

“I’m really proud because I’ve had the strength and blessings to win a World title again,” said Chocolatito. “After so many fights, the one against Kal Yafai and being crowned World champion again, it was one of the most satisfying victories of my life.

“I did great work in training camp with my team, you’ve already seen the results and we’re doing the same and persevering through this time, so we are prepared to come out with our hand raised again.

NEWS:   Charlo vs Tszyu live on Showtime from Las Vegas on Jan 28

“It’s a hard fight with Israel. You cannot look past anyone. He has to watch out, and so do I. We’re going to have a great fight, I always hope everything turns out well in the end. He’s coming in good shape and so am I, so we move forward.

“We are focused on Friday tonight, I think it’s going to be a difficult fight, like every fight is. The most important thing is coming in there in good shape, mentally and physically and coming out with my hand raised. After that, we can discuss many important things and we’ll see about the fight with Estrada.

“Thank God, I had that last opportunity i had in the fight with Yafai. We had that fight and then the pandemic happened. I went to my family. There were a lot of important things that I couldn’t do.

Chocolatito’s clash with Gonzalez is part of a huge fight night in Mexico City, topped by a triple header of mouthwatering World title action.

Juan Francisco Estrada (40-3 27 KOs) defends his WBC World Super-Flyweight title in a rematch with Carlos Cuadras (39-3-1 27 KOs) – with Estrada and Chocolatito on a collision course for a rematch should they both emerge victorious – and Julio Cesar Martinez (16-1 12 KOs) will now defend his WBC World Flyweight title against Moises Calleros (33-9-1 17 KOs).


« Julio Cesar Martinez wants to unify at 112 before moving up