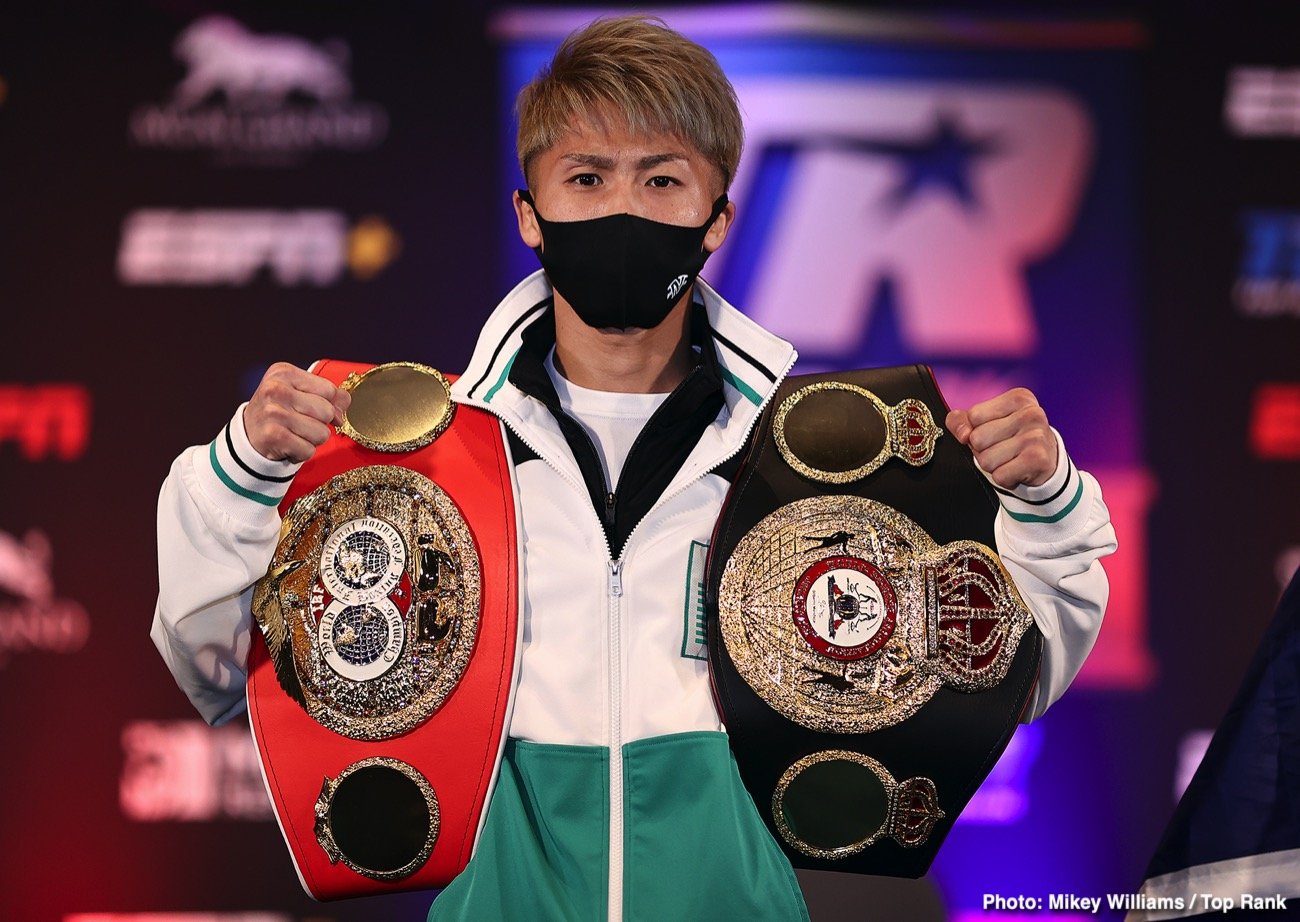 Despite his self-confidence, the Australian Moloney (21-1, 19 KOs) is viewed as food for the Japanese star Inoue, and this fight has early knockout written all over it.

#1 WBO, #2 WBA, #4 IBF, and #5 WBC Moloney is a decent fighter, but we’ve already seen how limited he is with his loss Emmanuel Rodriguez in 2018 exposed his limits as a fighter. This is the same Rodriguez that Inoue massacred in two rounds in 2019.

The Inoue vs. Moloney is a mixed bag of prospects competing in showcase fights for the most part. You can’t blame Top Rank for wanting to make their prospects look good by matching them against beatable opposition, but you’ve got to call it as you see it as well. There’s not much to the Inoue-Moloney undercard.

Moloney never avenged his loss to Rodriguez, and his four since then have come against pedestrian level opposition. 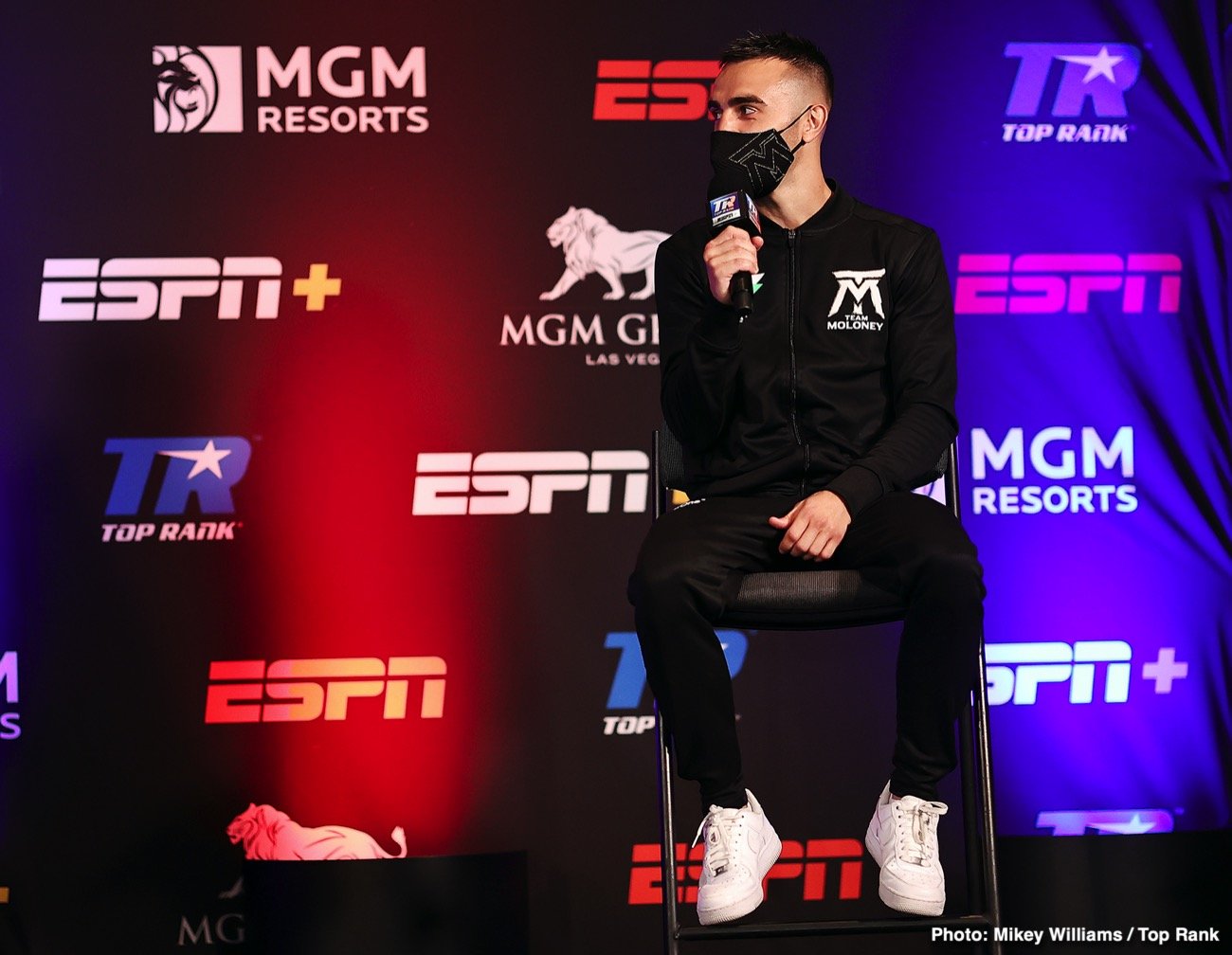 Inoue, 27, and Moloney will be the main event on Halloween on October 31st in ‘The Bubble’ at the MGM Grand in Las Vegas, Nevada. When does Inoue vs. Moloney star? At 7:30 p.m. ET. Where to watch Inoue vs. Moloney? On ESPN+.

Top Rank is obviously hoping that many boxing fans will subscribe to ESPN+ to watch Inoue fight Moloney, but it’s the wrong fight to put on the app behind the paywall.

Top Rank wants to turn Inoue into a star in the United States, and they’re not going to do that by putting his fights on ESPN+.

There are too many casual boxing fans that don’t have ESPN+, and they’re not going to subscribe to watch the Inoue-Moloney fight when they’ve never seen him or Moloney fight before. 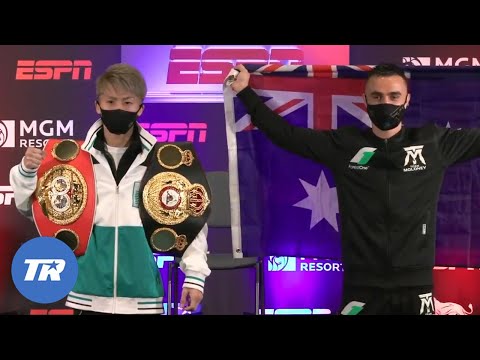 What’s going to be interesting to see isn’t so much how competitive the Inoue vs. Moloney fight is because it’s probably going to end quickly. Fans want to see if Inoue is still the same fighter he once was after his recent war against former four-division world champion Nonito Donaire last November in Japan.

Inoue was staggered by Donaire, suffered a broken nose a fractured eye ride. Naoya suffered a lot of punishment in winning the fight, and he was beaten up a little in the win. Donaire took a thrashing as well, but he dished out a lot of pain to Inoue. 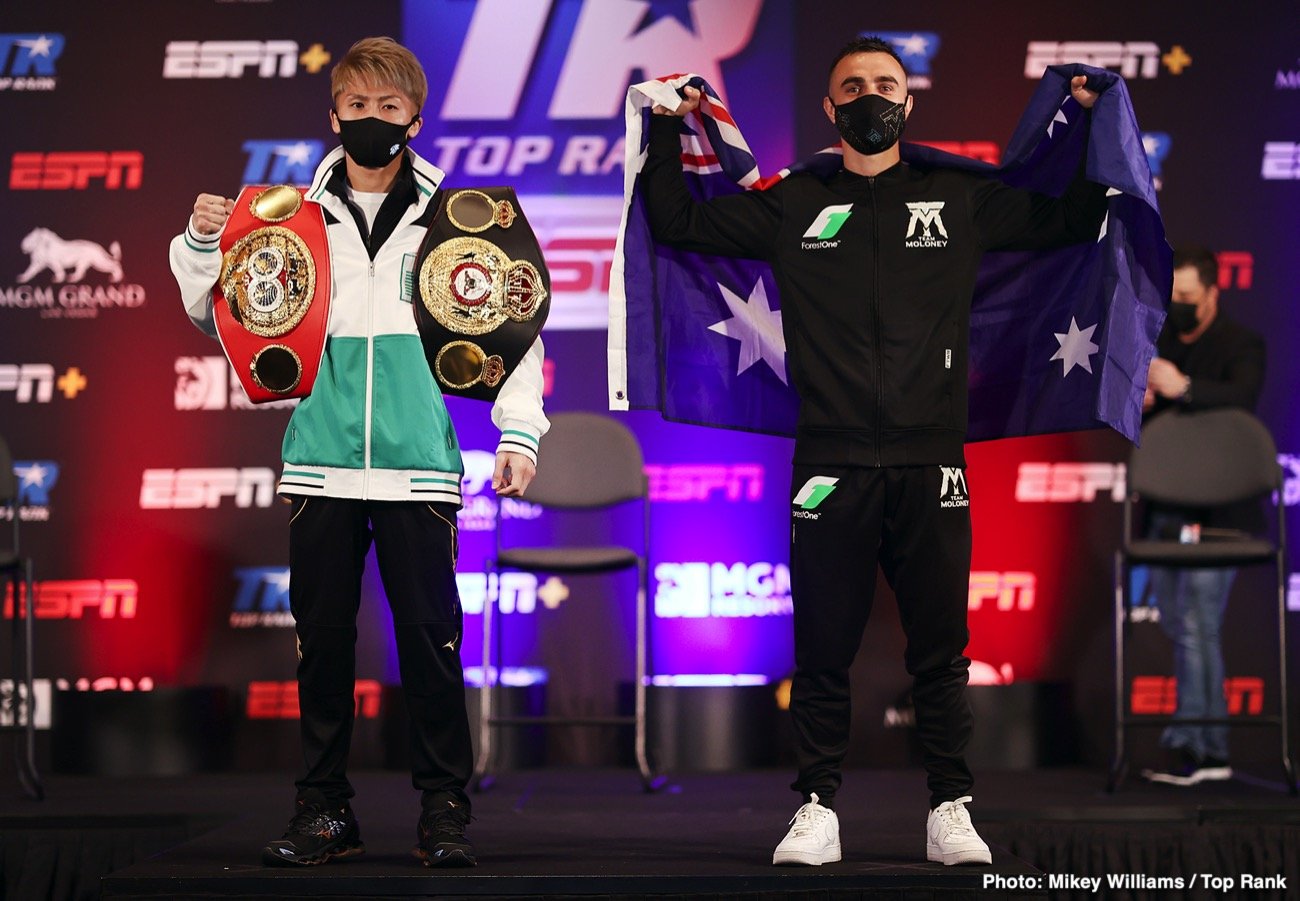 The fight showed that Inoue’s face is fragile, and he doesn’t take a shot any better than an average fighter. You can say that Inoue got very, very lucky that a high number of big left hooks that Donaire threw in the fight just barely missed.

If most of Donaire’s left hooks had landed, Inoue’s facial bones would likely have crumbled to pieces. It’s interesting that when Donaire asked for a rematch, Inoue chose to take a soft fight against Moloney rather than mixing it up a second time with Nonito.

That moved by Inoue showed how much he respects Donaire. The Japanse knows that fighting Donaire a second time might not bring a favorable result to him again.

If Inoue will face any additional sluggers during his career, he’s going to need to work on his defense more because he’s going to get taken apart sooner or later. Inoue isn’t sturdy enough for him to fight sluggers.

‘Monster’ Naoya breaks down too easily with his facial bones, and he can’t afford to be suffering damage like this. 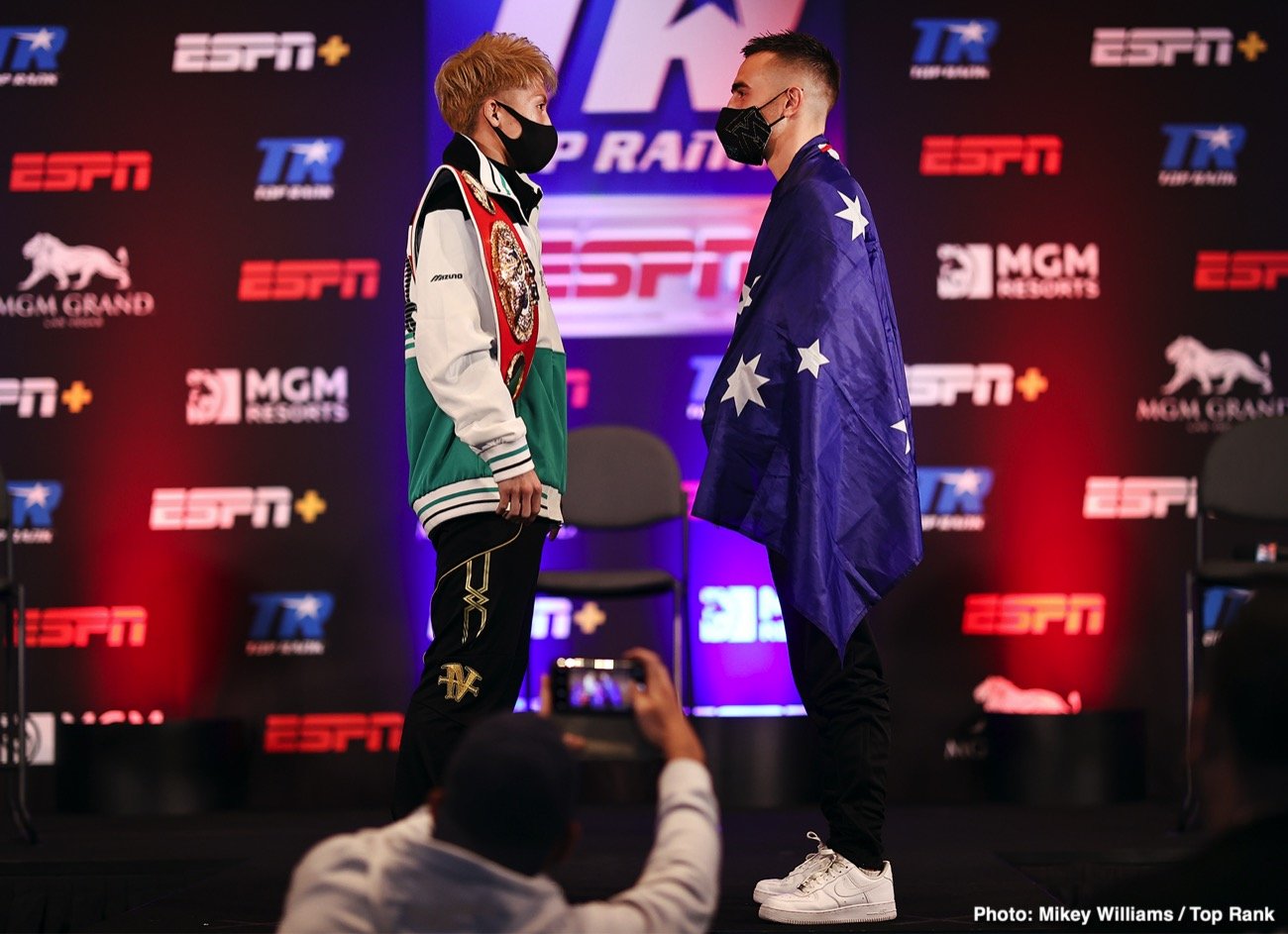 Moloney motivated by the loss to Rodriguez

“That loss that I suffered against Rodriguez showed me how much I want this,” said Moloney said during the final news press conference on Thursday.”I will not let myself lose again. On Saturday night, nothing will stop me, and I will become the best bantamweight in the world.”

If anything, Moloney’s loss to Rodriguez showed that he doesn’t belong inside the ring with Inoue or John Riel Casimero. What Moloney should be doing is trying to avenge his loss to Emmanuel rather than being given a title shot after four wins over fluff fodder-level opposition. 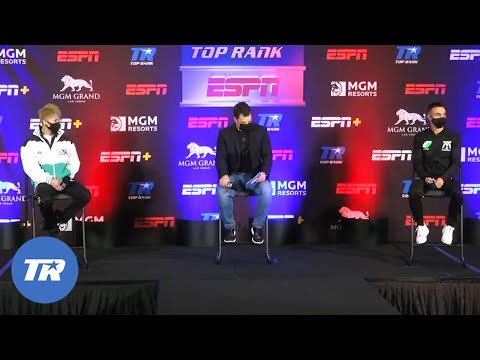 With the weak opponents that Moloney has fought since his loss to Rodriguez, he should have arguably been lowered to the bottom of the rankings rather than moved to the top. You be the judge in determining if Moloney deserves a title shot based on his recent four-fight winning streak.

I’ve never heard of any of those fighters before other than Baez, who looked mediocre in losing to Moloney last June. 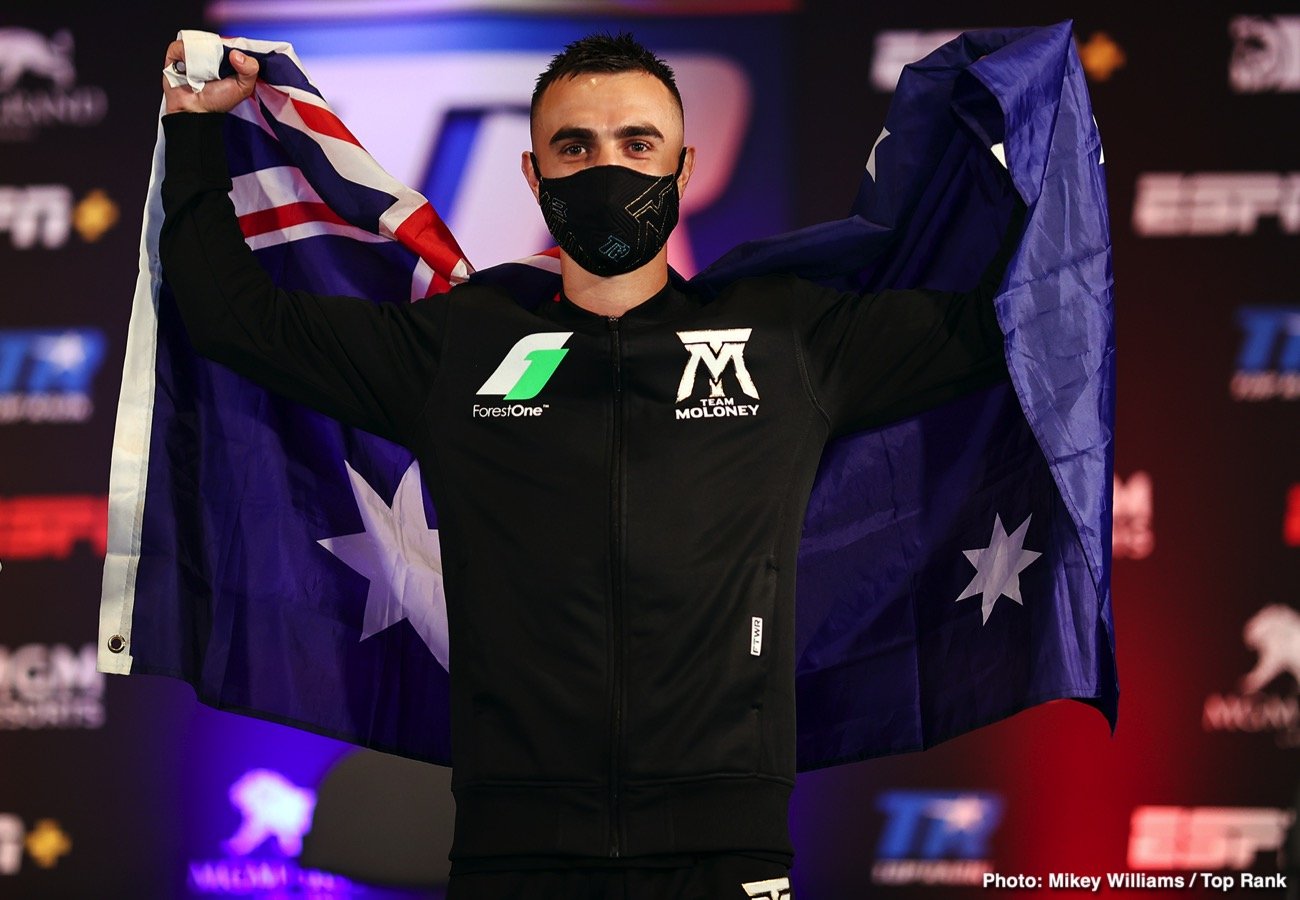 Jason to put pressure on Naoya

“He has never faced a fighter as relentless as me. I’m going to take him to places he has never been before,” said Moloney. “I can’t wait. People haven’t seen what I can do inside those ropes.”

It wouldn’t be so bad if Moloney beat three or four quality opponents in the last two instead of the fodder that his management has put him in against. Moloney should have fought some of these fighters to earn a title shot against Inoue:

Moloney can’t stay on the outside against Inoue because he’ll get clipped right away with one of his accurate power shots. The only thing Moloney can do is to try and stay close to Inoue and smother his long-range power.

Staying on the outside is a recipe for disaster for Moloney. But with that said, Moloney will get eaten up by Inoue’s body shots if he tries to stay close to him.


« Eddie Hearn: Chisora has got to get Usyk early

Chisora goes off on Kugan Cassius, boots him from the room »