Chisora goes off on Kugan Cassius, boots him from the room

By Charles Brun: In a minor incident on Friday, heavyweight Dereck Chisora lost his temper with IFL TV regular Kugan Cassius and booted him from his room during an interview about his fight with Oleksandr Usyk.

It seems that Chisora (32-9, 23 KOs) took issue with the access that Kugan has for Eddie Hearn’s Matchroom Boxing shows, and he wants to see him share with other media.

Interestingly, Chisora would care about the access that Hearn and Matchroom give Kugan and IFL TV. For a fighter to care about this kind of stuff, it appears that Chisora has been observant of Kugan’s presence for the Matchroom shows.

Kugan responded to Chisora’s suggestion that IFL TV shares the access they’re given routinely by Matchroom by saying that it’s not up to him. Matchroom media are the ones that choose him.

Chisora didn’t like the responses he received from Kugan and then booted him from the room after labeling him a “liar.”

It was an interesting dance to listen to with the way Chisora was grilling Kugan about the access that he’s given for Matchroom’s events and for the interviews he’s given.

“I don’t get it. Why are you the only guy in here and the other guys are not here?” said Chisora to IFL TV interviewer Kugas Cassius. “I’m just asking in the bubble. What kind of deal do you have with Eddie [Hearn]?

“Why does he like you more than the other [interviewers from other outlets]? I’m just asking because most journalists aren’t here and you’re here. You’re a media, so why are the other media not here? 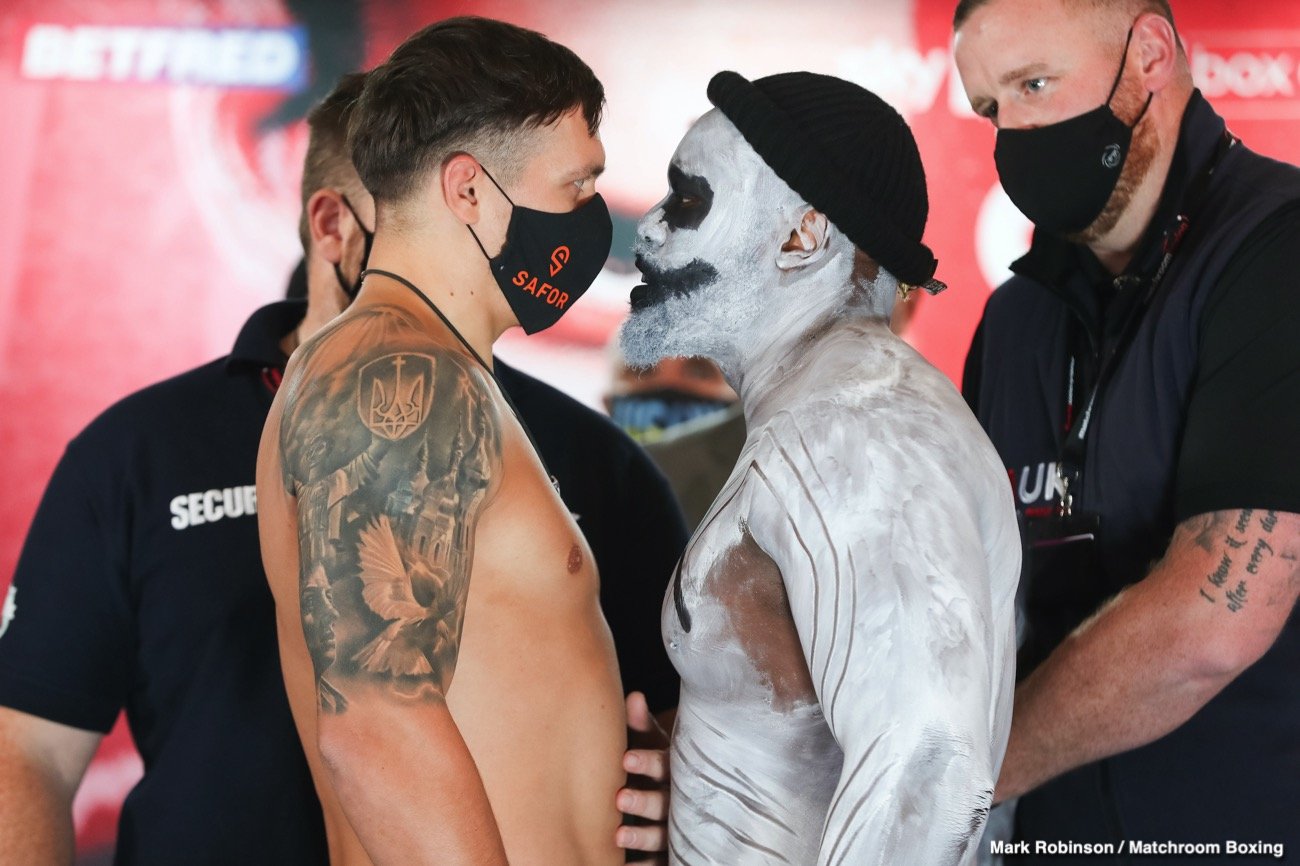 “Would you swap your slot one day for another media guy to come in as a good suggester as a good journalist to say, ‘I’ve done some more, how about we let another rival to go?’ Yes,” Chisora said when asked if he would swap his position in fighting Usyk on Saturday to let one of his friends face him instead.

“Tell me who? Give me an idea. Don’t turn it [the camera] off. I’m just saying who? I’m saying, you give up your position for one of the shows coming up like Katie Taylor’s, and you give it to like, who is your rival?

“Let’s say we give it to Boxing News or Boxing.com or whatever it’s called, the blogger’s name or whatever. Would you? It’s a simple answer, Kugan. Yes or no, for f*** sake. Just f**** answer the question. No, no, no.

“We’re not talking about this fight. You’re here for this fight for the big fight, fine, but Katie Taylor’s fight. Would you give it to somebody else? Because what you’re doing is not fair,” said Chisora.

Ultimately, it’s up to Hearn to use Kugan and his IFL TV company for his interviews and events. If Hearn favors Kugan over other members of the media, that’s his choice.

Chisora feels that there should be more sharing of media access for Matchroom fighters than one outlet, IFL TV, getting many spots. That’s not something that Kugan has control over. It’s up to Hearn and Matchroom if they want to give Kugan access ahead of other outlets.

“You know why? Because you’re eating the whole pie by yourself. You’re not sharing the pie. To share the pie, ‘You know, Eddie, I’m going to do these shows, but I think I’m going to pass on the buck to another guy coming up.

Kugan: “I question whether someone would do that for me.”

Chisora: “You’re missing the point,” said Dereck to Kugan on the subject of sharing the media access that he has with Matchroom. “Share the pie. You’re here. though.

“You’ve done Dillian’s fight; You’ve done the whole fight camp, and you’re doing this. Other guys haven’t gotten a taste of doing it and being in the bubble,” said Chisora.

Chisora: “It’s not your fault. This is what I say. ‘Eddie, I’ve done all these fights, do you mind if I let someone else come in from another blogger for these fights so he can get some viewers?’ That’s what I’m saying. Share the f**** pie.”

Kugan: “They have the option to do that.”

Chisora: “But you can tell Eddie that these guys need to eat as well.”

Chisora: “What I’m saying is get your other colleagues to get paid as well by coming into the bubble for you not taking all the f**** space.”

Kugan: “You think I have the power to do this?”

Kugan: “I think you’re giving me too much credit now.”

Chisora: “Yes, you’ve got the power.”

Chisora: “Every man has got power. Like I said, I’ve got power in this show.”

Kugan: “You own this show.”

Kugan: “You’re the main event on the show. That carries weight. I own the camera, that’s it.”

Why would Kugan give up the great position he’s been given by Hearn and Matchroom to allow his competition to move in and take over? It doesn’t make sense. 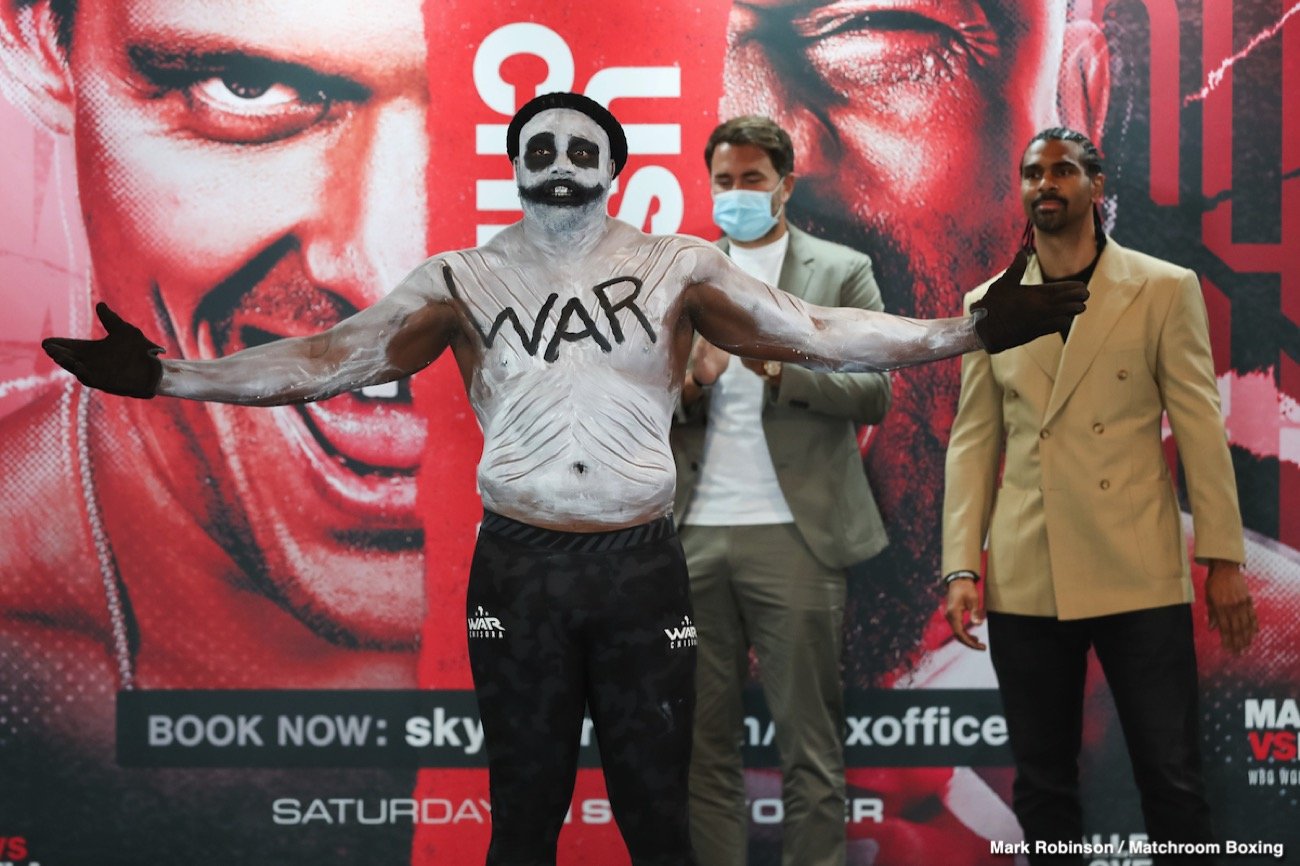 Chisora: “You’re such a liar.”

Kugan: “I own the camera. I have absolutely no influence in telling Matchroom media who they can bring into the bubble or who not.

“All I know is in the Fight Camp, Boxing Social and Secondsout have been in there. Why they’re not in there, I don’t know.”

Kugan: “I wish you the best of luck tomorrow night.” 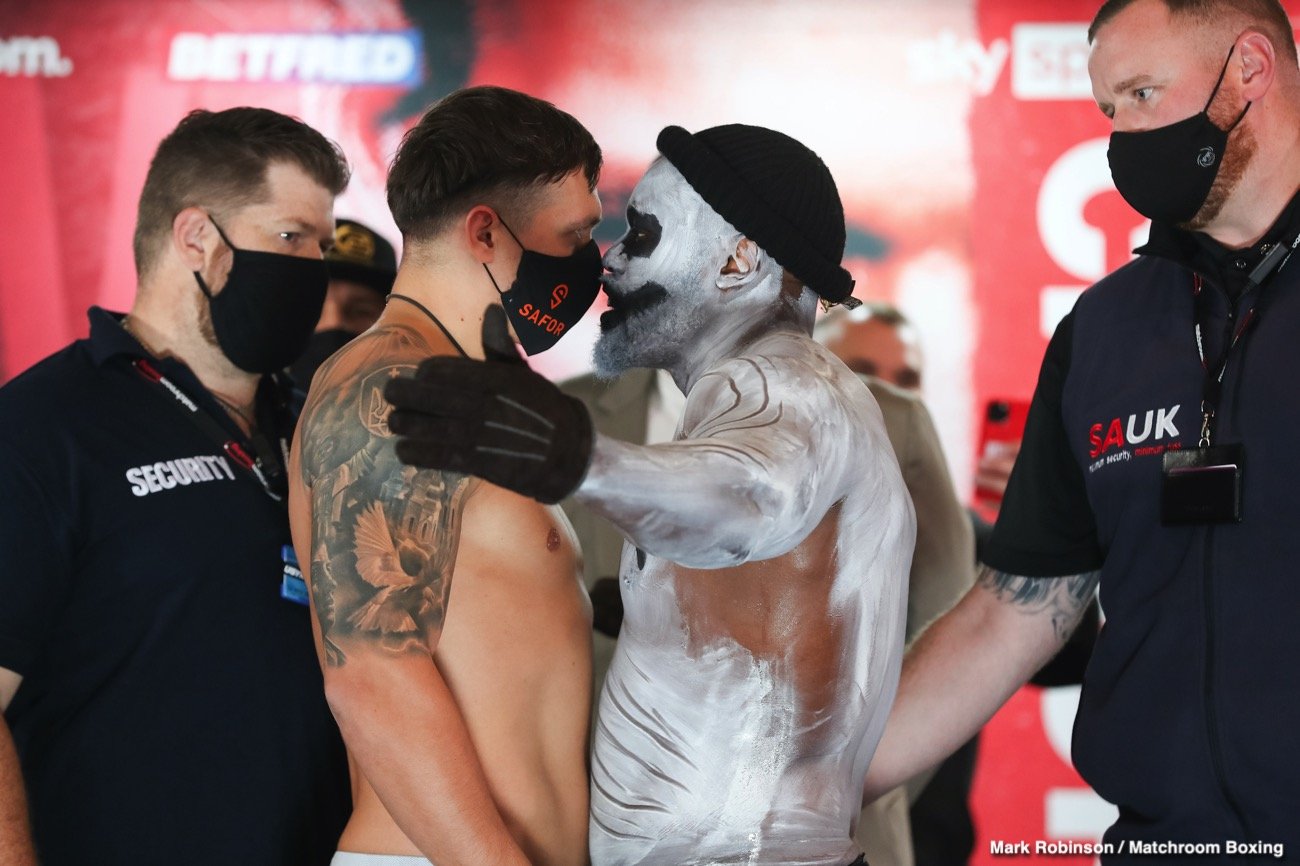 At the end of the interview, it was clear that Chisora was angry with Kugan, and he didn’t like the answers he was giving him to his questions.