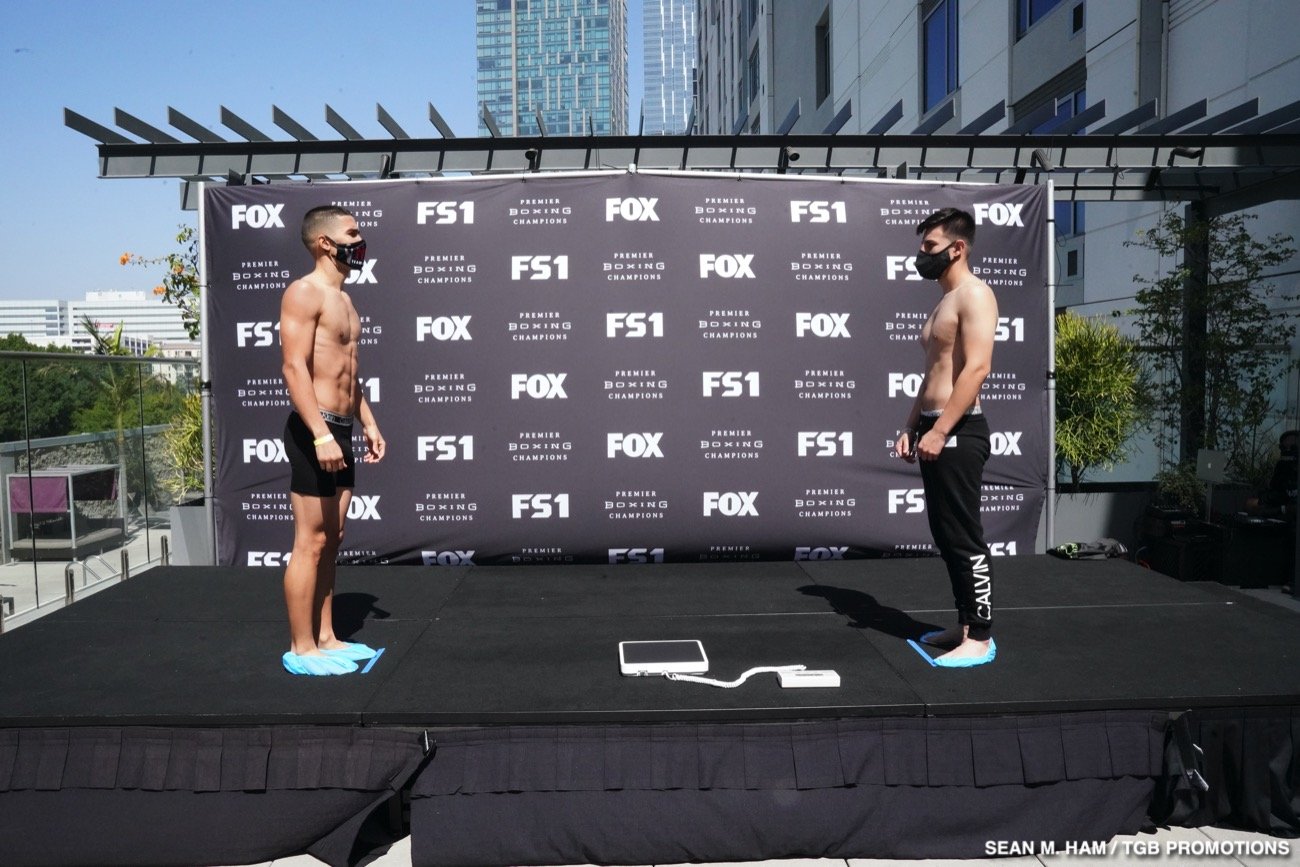 Undefeated lightweight prospect Néstor Bravo will take on José Luis Gallegos in a 10-round showdown that headlines FS1 PBC Fight Night and on FOX Deportes Wednesday, September 23 from Microsoft Theater in Los Angeles.

The FS1 telecast begins at 10 p.m. ET/7 p.m. PT and will see a battle of unbeaten featherweights as Ranfis Encarnación and Víctor Pasillas duel in the 10-round co-main event. Plus, undefeated Cuban Maidel Sando goes up against Genc Pllana in an eight round super middleweight bout.

The event will be promoted by TGB Promotions and will take place without fans in attendance at the Microsoft Theater, an AEG venue, in downtown Los Angeles. The Encarnación vs. Pasillas fight is promoted in association with Sampson Boxing.

“September 23 will give boxing fans a look at numerous exciting prospects putting their unbeaten records on the line in the toughest contests of their careers,” said Tom Brown, President of TGB Promotions. “Headlined by Néstor Bravo, one of Puerto Rico’s brightest prospects, taking on the dangerous José Luis Gallegos, this special Wednesday night show will see if Bravo has what it takes to become Puerto Rico’s next champion. In addition, unbeaten fighters Ranfis Encarnación, Víctor Pasillas and Maidel Sando will all look to be at their best to keep their records intact as they make their way into contenders.”

The 26-year-old Bravo (18-0, 13 KOs) will return to fight on the U.S. mainland for the first time since 2018 when he knocked out Jonathan Perez in Orlando. Representing his native Arecibo, Puerto Rico, Bravo added three victories to his ledger in 2019, including stoppage victories of Rodolfo Puente and Cristian Ruben Mino. A pro since 2015, Bravo began his career with six-straight stoppage victories and will enter the ring on September 23 for his second scheduled 10-rounder.

Gallegos (19-8, 14 KOs) has faced an impressive lineup of contenders throughout his career, including Michel Rivera, Joshua Greer and Jhack Tepora. The 25-year-old Gallegos was born in Chicago and now fights out of Bakersfield, California. He enters this fight the winner of his last three bouts, including most recently defeating Ricky Lopez in January.

Unbeaten featherweight Víctor Pasillas shared thoughts on training camp and previewed his showdown against undefeated Ranfis Encarnación before they meet in the co-main event of FS1 PBC Fight Night and on FOX Deportes this Wednesday, September 23 from Microsoft Theater in Los Angeles.

The FS1 telecast begins at 10 p.m. ET/7 p.m. PT and is headlined by undefeated lightweight prospect Néstor Bravo taking on José Luis Gallegos in a 10-round showdown. Plus, undefeated Cuban Maidel Sando goes up against Genc Pllana in an eight round super middleweight bout.

The event will be promoted by TGB Promotions and will take place without fans in attendance at the Microsoft Theater, an AEG venue, in downtown Los Angeles. The Encarnación vs. Pasillas fight is promoted in association with Sampson Boxing.

Here is what Pasillas had to say from training camp in Redwood City, California with his head coach Brian Schwarz:

“Training has been great. We are preparing for war and definitely training for a statement win. I am in great shape both mentally and physically. We worked hard during this camp. Be prepared to see a better version of myself on fight night. I’m coming to do damage!”

On his matchup with Ranfis Encarnación:

“Ranfis is a great fighter with good technique. He is also undefeated which means I must bring my ‘A’ game on fight night. It’s going to be interesting to see what game plan Ranfis brings to the ring that day. My plan is to not let the fight go the distance. It’s time to eat and I’m starving.”

On making his televised debut on FS1:

“First, I want to thank my team for the opportunity to showcase my talents on this stage. I cannot wait to make my televised debut on FS1. This is by far the most important fight of my career. I’m coming with everything I got, because I know this is the turning point that will lead to bigger and better fights. I am ready to bring an exciting fight to the fans and get my hand raised in victory.”

On what a win will do for his career in the featherweight division:

“Coming out on top against Encarnación is going to catapult me into some big fights at featherweight. The division is wide open and I know with hard work I can take it over. I am working towards a title shot. I am willing to fight anyone to get to that next level.”

A decorated amateur from San Cristobal, Dominican Republic, Encarnación (17-0, 13 KOs) has fought professionally since 2014. The 25-year-old had an impressive early career run in his home country, including winning a regional title over Milner Marcano in 2018. He made his U.S. debut in April 2019 by stopping Jose Bustos, and followed that up with a first round knockout over Emmanuel Dominguez last November.

Born in Los Angeles and fighting out of Redwood City, California, Pasillas (15-0, 8 KOs) will make his 2020 debut after a 2019 campaign that saw him score stoppage victories over Ernesto Guerrero and Saul Banos. The 28-year-old has ended his last five fights inside of the distance, not allowing an opponent to fight past round four. The September 23 showdown will be his first that is scheduled for 10 rounds.

The 31-year-old Sando (9-0, 7 KOs) added two stoppage wins to his ledger in 2019, with victories in January and March. Born in Las Tunas, Cuba, Sando trains and fights out of Nashville, Tennessee, where he made his pro debut in December 2017. He will step up his professional competition for the first time when he faces Pllana on September 23.

Pllana (8-1-1, 4 KOs) turned pro in 2017 after just four amateur fights, and won his first five contests before a majority decision loss to Raphael Igbokwe in August 2019. Originally from Pristina, Kosovo, Pllana now fights out of Hagerstown, Maryland. He enters this fight after a career best victory over Kevin Newman in February of this year, winning a 10-round unanimous decision. Prior to defeating Newman, the 26-year-old fought unbeaten Kalvin Henderson to a majority draw.

Povetkin vs. Whyte: Is Dillian making a mistake taking rematch in November? »