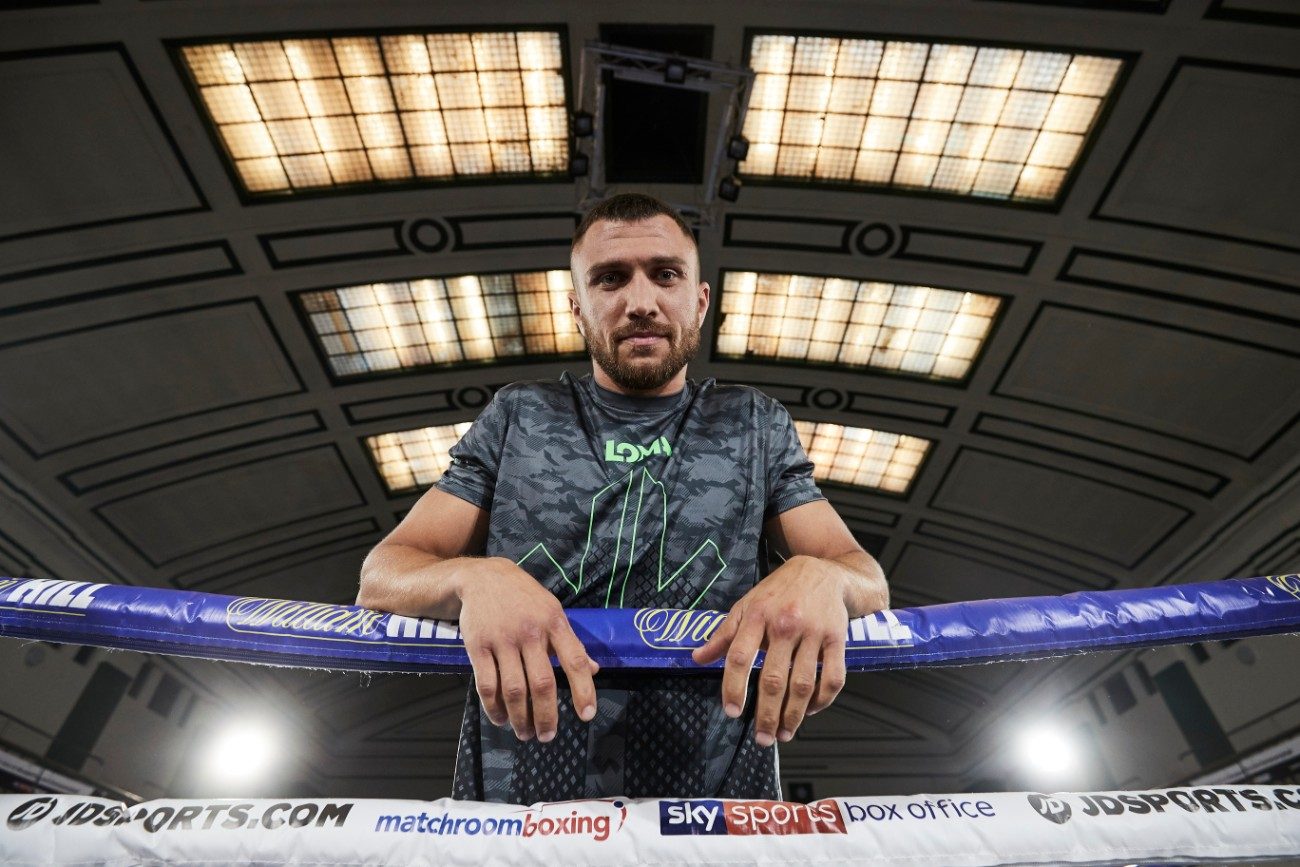 By Jim Maltzman: Vasily Lomachenko wants to dish out punishment on Teofimo Lopez for all the lip service he’s been giving him, and he says he won’t feel sorry for him after their fight on October 17th. WBA/WBC/WBO lightweight champion Lomachenko (14-1, 10 KOs) want to give Teofimo a lesson when the two meet on ESPN at MGM Grand in ‘The Bubble’ in Las Vegas, Nevada.

The three-division world champion Lomachenko, 32, is poised to become the undisputed 135-pound champion next month when he faces IBF lightweight champion Teofimo on October 17th.

Teofimo has been asking for trouble even before he captured the IBF title last December against Richard Commey. As a contender, Teofimo had targeted the two-time Olympic gold medalist since he early part of his career, and now he’s ready to get his wish.

NEWS:   Vasiliy Lomachenko to talk with promoters about his next move

Teofimo must back up his words

Lomachenko had viewed Teofimo as an irritating annoyance up until recently, as he’d never captured a world title. However, that all changed when Teofimo beat IBF lightweight champion Richard Commey by a 2nd round knockout on December 14th at Madison Square Garden in New York.

At that pint, Lomachenko realized that he had to take Teofimo seriously as a future opponent, as he has something that he wants. Loma craves the IBF 135lb belt that Teofimo has in his possession, and he’s looking forward to taking it from him on October 17th. 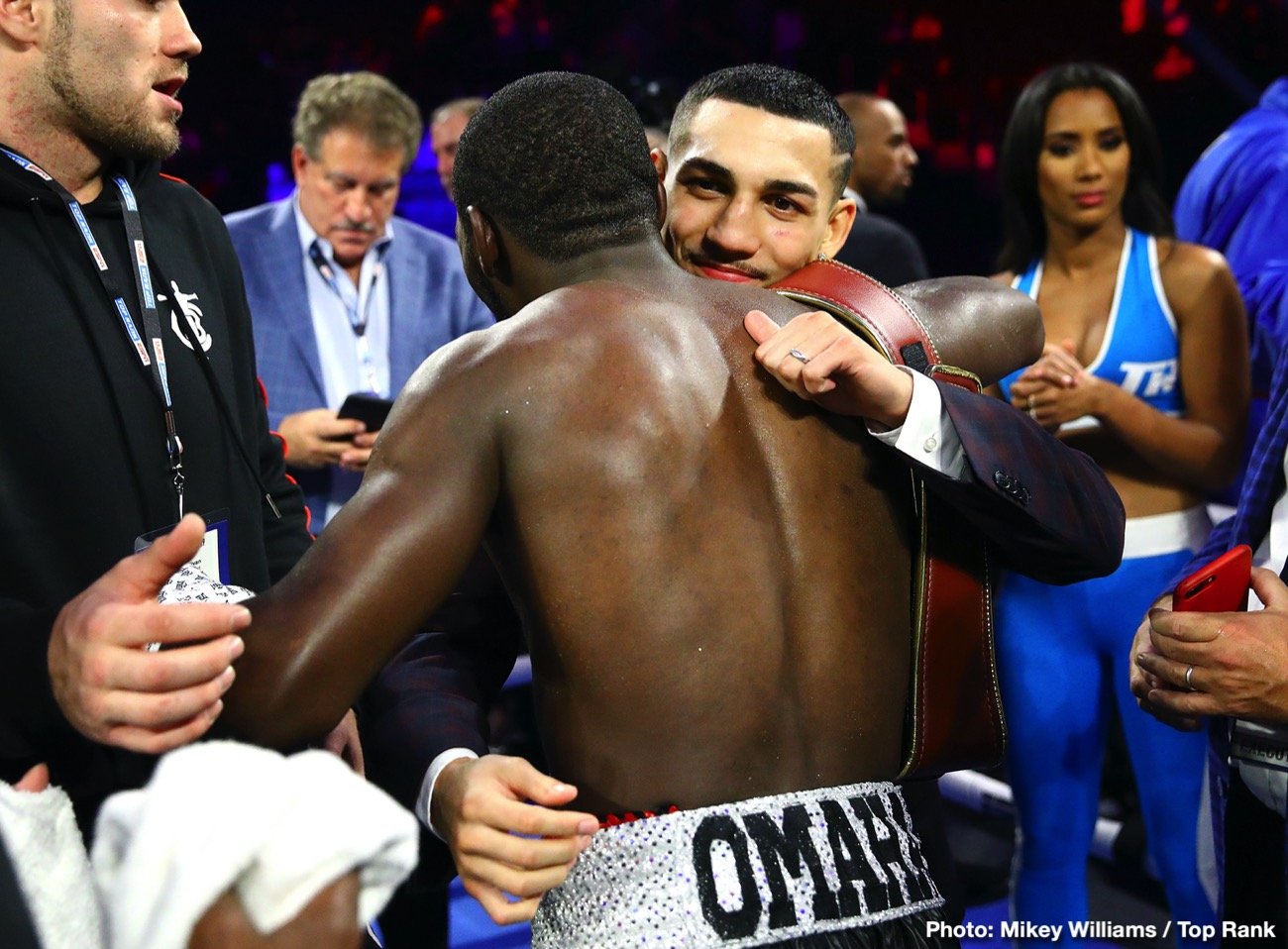 “I understand just one thing. Whatever you say, you must prove it in the ring. That’s it,” said Lomachenko to Sky Sports News about his theory on fighters that do a lot of bold talking.

“In my country, if you insult somebody, you’d better be prepared for them to hurt you. Whatever I say, I believe in it. So what he’s saying, for example, he actually believes. But if he doesn’t follow it up with actions and fulfill those words, then he chose those words poorly to begin with,” said Lomachenko.

Teofimo has the tools to win this fight and make Lomachenko look like an old man in the process. Lomachenko can’t take Lopez lightly, as he’s physically superior to anyone that he’s faced yet in the professional ranks. It would be a mistake on Lomachenko’s part to lump Teofimo in with the 15 other opponents he’s fought as a pro. Teofimo is different, and Lomachenko will find that or himself on the night.

We don’t know if Lopez, 23, believes what he says when he talks about his goal of defeating Lomachenko on October 17th. It’s possible that Teofimo is just talking to get boxing fans interested in the fight, but without the true belief that he can win the fight.

A victory for Lopez, especially an emphatic one involving a knockout, would be a triggering mechanism for Lomachenko. He will be intent on doing whatever possible to avenge that loss and recapture his IBF, WBC, and WBO lightweight belts. Lomachenko’s WBC Franchise title has been unanchored by the World Boxing Council for this fight, meaning that it can be won by Lopez.

So if Lomachenko loses, he’ll be back to ground zero with his career, with no titles, and just starting fresh as a contender.

“I’m definitely not going to feel sorry for him. If I get a chance to cause him pain, I’m going to do it,” said Lomachenko about Teofimo  “I’ve had a one-year break without a fight. Now I’m healthy and happy.

“I’m 32, I’ve been very long in this sport so of course, my body has tired a little bit. But I’ve had a break. I am close to my goal. This is one step closer to my dream. I want to unify. I want to put my name in boxing history,” said Lomachenko.