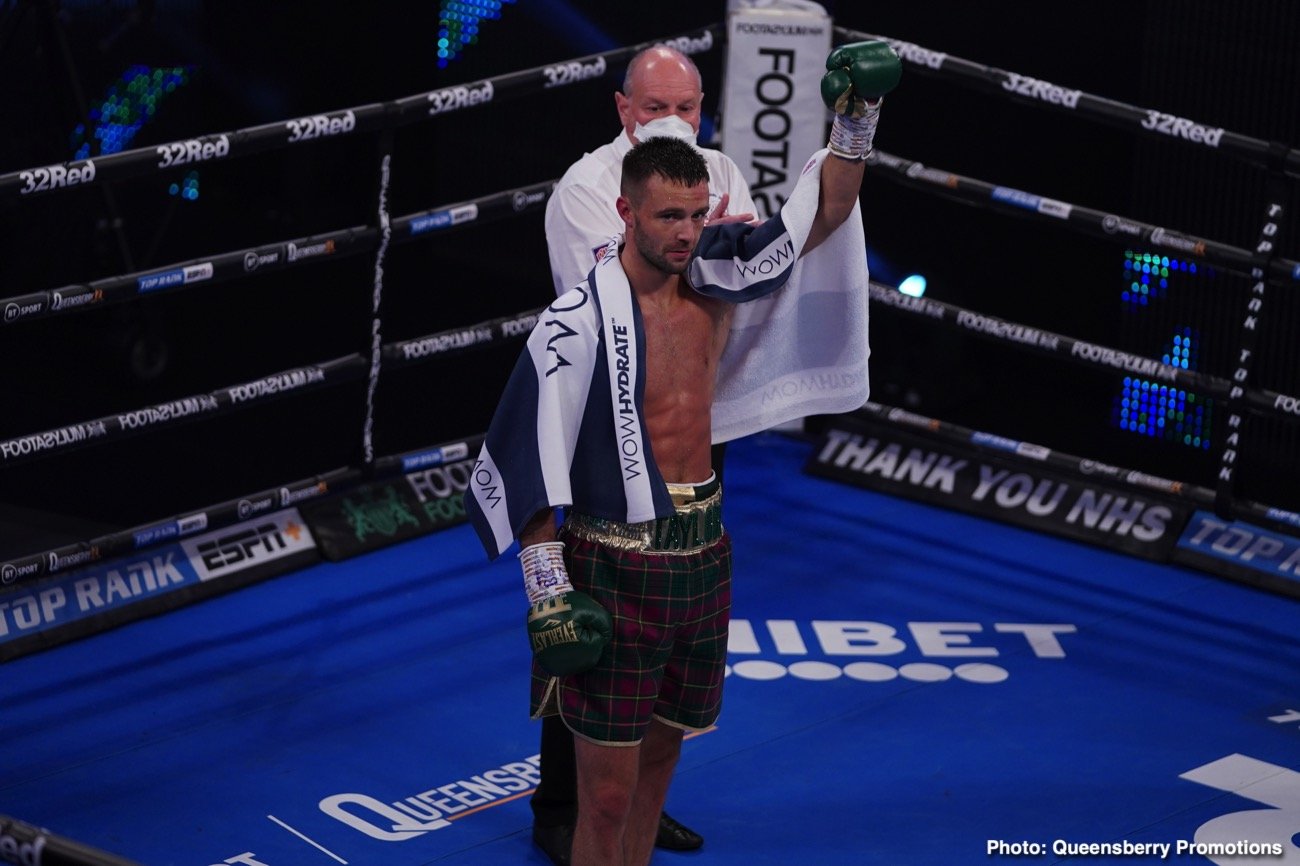 With his 1st round knockout win over Khongsong, Taylor (17-0, 13 KOs) got his last obstacle out of the way that was blocking a fight for the undisputed 140-pound championship match with Ramirez (26-0, 17 KOs).

Unfortunately, Ramirez may need to face his WBO mandatory challenger Jack Catterall (25-0, 13 KOs) before encountering the unbeaten 2012 Olympian Taylor in a match or the undisputed championship in 2021.

The World Boxing Organization doesn’t appear to be interested in giving Ramirez a chance to face Taylor firs, which means that we could be seeing Catterall next for the California native. If the promoters for Ramirez at Top Rank can squeeze in the Catterall fight in December, that would put Jose in a position to face Taylor in early 2021.

Taylor has already said that he doesn’t want to fight Ramirez without fans in 2020, as he prefers their match to take place in front of a live gate. He views the match as one of the biggest in boxing. I don’t know about that, but it’ll be a huge one for the UK boxing fans. 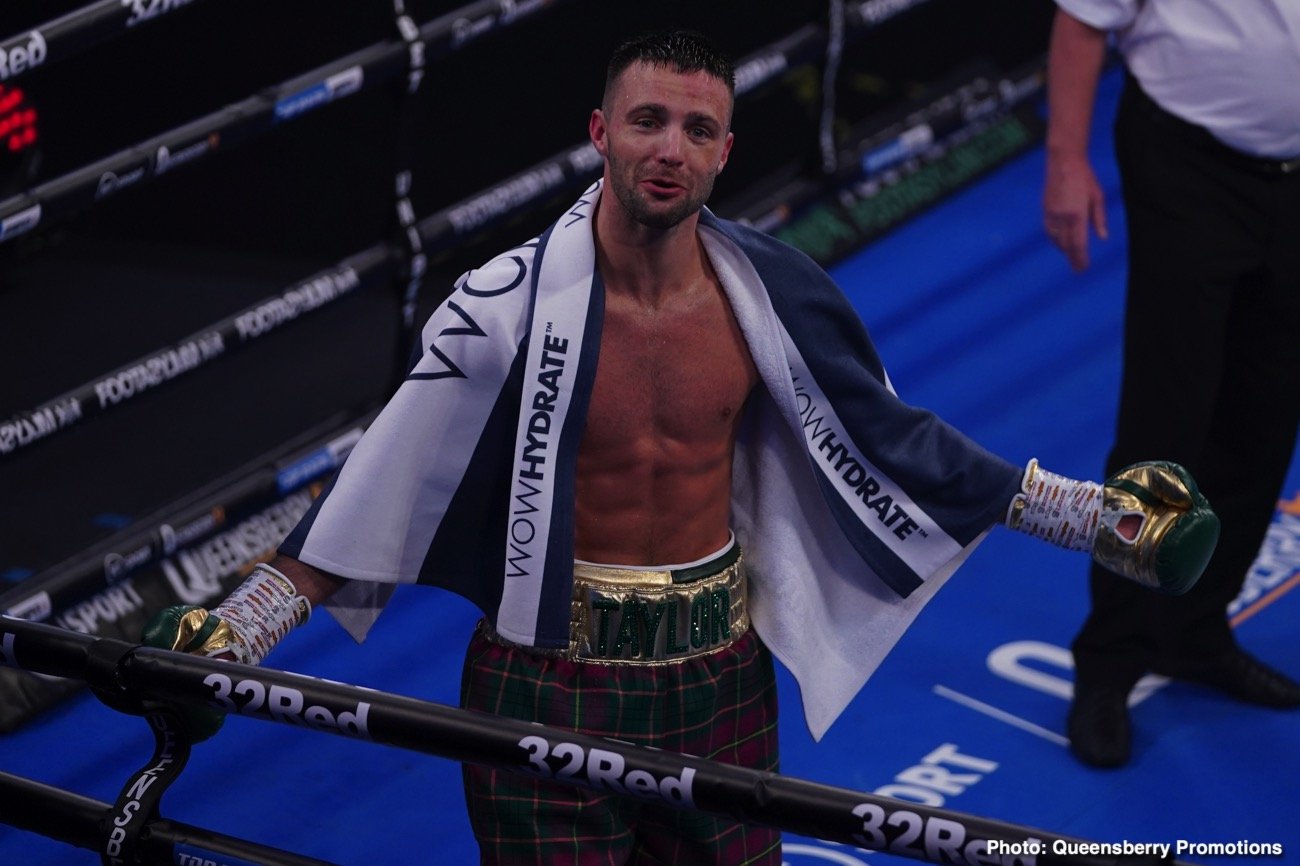 “No,” said Taylor to BT Sport Boxing when asked if he wants to wait nine months to face Jose Ramirez in a unification fight. “I want Ramirez 100% next. He’s a very good champion and unbeaten like myself. He’s hungry and at the top of his game.

“I thought the [Viktor] Postol fight wasn’t a very good performance at all. And I do feel he can perform better than that given the circumstances, but again, I wasn’t impressed with what I saw from him.

“I want that fight now. And I believe I whip his a** all day long. I just believe I have the beating of him. I have never seen anything from him that I haven’t seen before.

“Yeah, I want that fight as soon as possible. Obviously, I know the situation with the mandatory and stuff, but hopefully, we can get that worked out. I would like to for selfish and personal reasons to get that fight next.

“And I feel like I deserve it. I’ve been in big fight after big fight for my last four fights. And I’ve not ducked anyone. I’ve never ducked a tournament like someone else [Ramirez]. So I’m game. I’ll fight the best whenever I want,” said Taylor.

On the one hand, Taylor says he wants Ramirez next, but then in his next breath, he only wants to fight him with fans present. Ramirez and Taylor won’t be fighting in 2020 because there aren’t going to be fans allowed back into boxing fans this year.

The vaccine still hasn’t been released to the general public in the US and UK, and it probably won’t be available until the first quarter of 2021. Even when it is available, the government officials will likely make sure the number of cases of coronavirus begins dropping steeply before they allow fans back into sporting events.

Ramirez will also want to stage the Taylor fight in front of fans because it would be a big fight to produce it in the Fresno, California area.

Josh only wants Ramirez to fight in front of fans

To be honest, I’d rather wait until the fans are back for that one,” said Taylor, about wanting to stay to face Jose Ramirez in front of fans. “It’s a huge fight.

“I think it’s one of the biggest fights in boxing at the minute for all the belts [at 140]. So a fight of that magnitude, I think it would be better for all the fans there either on these shores [UK] or in America,” Taylor said.

“Josh is with the best in the business with MTK, said Davison.

“100 percent,” said Taylor about wanting the fight with Ramirez. “I’ll leave that to my management team. I believe we can get something sorted, but we never know.

“We got with my team and my management team to get that sorted, but personally, of course, I want that fight,” said Josh.

The Ramirez-Taylor fight could take place in 2020 if the following things happen:

“If Jack Catterall does get that shot, I think he deserves it. I can see it from his personal point of view as well,” Taylor said. “He’s been the [WBO] mandatory for a very long time.

‘If I were him, I wouldn’t want to be waiting either or stepping aside money or whatever like that. I would want my shot if I were Jack Catterall as well. So I can see where he’s coming from.

“But personally, I want the [Ramirez] fight next. I want to be the man to beat him,” said Josh Taylor.

It doesn’t look like Taylor and Ramirez will be fighting this year, and the contest could get delayed in 2021 as well, depending on the sanctioning bodies. The problem with two champions coming together for an undisputed championship fight is all the mandatories that could come due during that time.

In theory, a champion with four titles could take two years defending against nothing but mandatory challengers at two fights per year. It’s no wonder why the sanctions bodies are excited about unification fights.

“The plan was to take our time,” said Davison about Taylor’s fight with Khongsong. “We knew he was going to be very heavy-handed. The plan was to tighten the screws as the rounds and capitalize on the mistakes that Josh forced out of him, but obviously, I’m over the moon for it to be over and done with,” said Davison.

“I felt this thing coming straightaway. I knew from watching him on videos that he swings on the break. When you’re in close on the clinch, he swings straightaway always with a hook or uppercut,” said Taylor to BT Sport Boxing about Khongsong.

“I saw that coming, so I sort of pressed against him up, and then pushed him against the ropes. As he threw the right hand, I hit him with a left hook, which I felt sank right in. I knew it was a real good shot.

“And I felt it sinking in. I didn’t know to what extent until I turned around and saw him on the floor. When I watched him on the replay there, you could see it sink right in, and I felt that it went right through my arms. So I knew it was a good shot.

“100 percent, yeah,” said Taylor when asked if Khongsong was as heavy-handed as he looked. “I know people will go irritate, ‘You’re talking a bit of nonsense here,’ but I can go so far as to say that’s the heaviest puncher I’ve been in with as a professional. 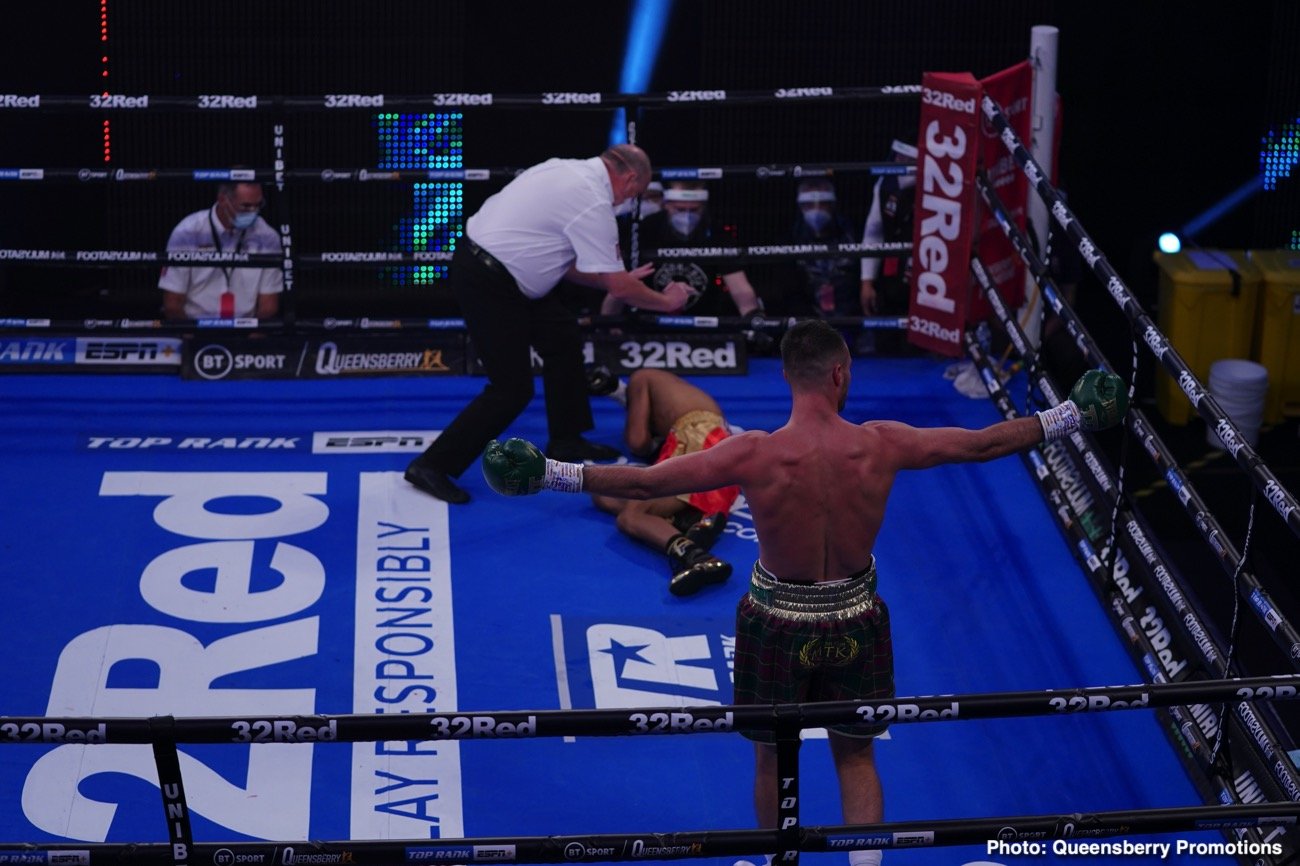 “So that switched me on to take my time and set things up and be patient rather than go and try and land a heavy shot straightaway. I was nice and patient setting that shot off, which came at the end of the break,” said Taylor.

Khongsong is another example of the International Boxing Federation ranking a mediocre fighter at the # spot with their organization. Over the years, we’ve seen many #1 ranked IBF contenders getting completely blown on by champions.

In each case, the fighters looked like they didn’t belong anywhere near the top spot, which was undoubtedly the case with Khongsong.

It’s unclear what went into the IBF’s thinking process to install the Thai fighter at #1, but they sure did end up with pie in their faces after Taylor made quick work of him last Saturday night.

Josh wanted to show more of his skills

“He was ginormous,” said trainer Ben Davison about Khongsong. He’s big; he’s tall, he’s long. We knew going into that; he was a tough fighter. I said, going all the way through, and I’m not just saying it for the sake of saying it, he was a dangerous opponent.

“And I didn’t know that was it,” said Davison about the knockdown. ‘I knew he was very big in the shoulders, and we spoke about him being very narrow at the waist. We spoke about him not being strong to the body, but it was a fantastic shot that Josh found.

“Josh is a phenomenal body puncher, one of the best in the world as he has shown again,” said Davison. 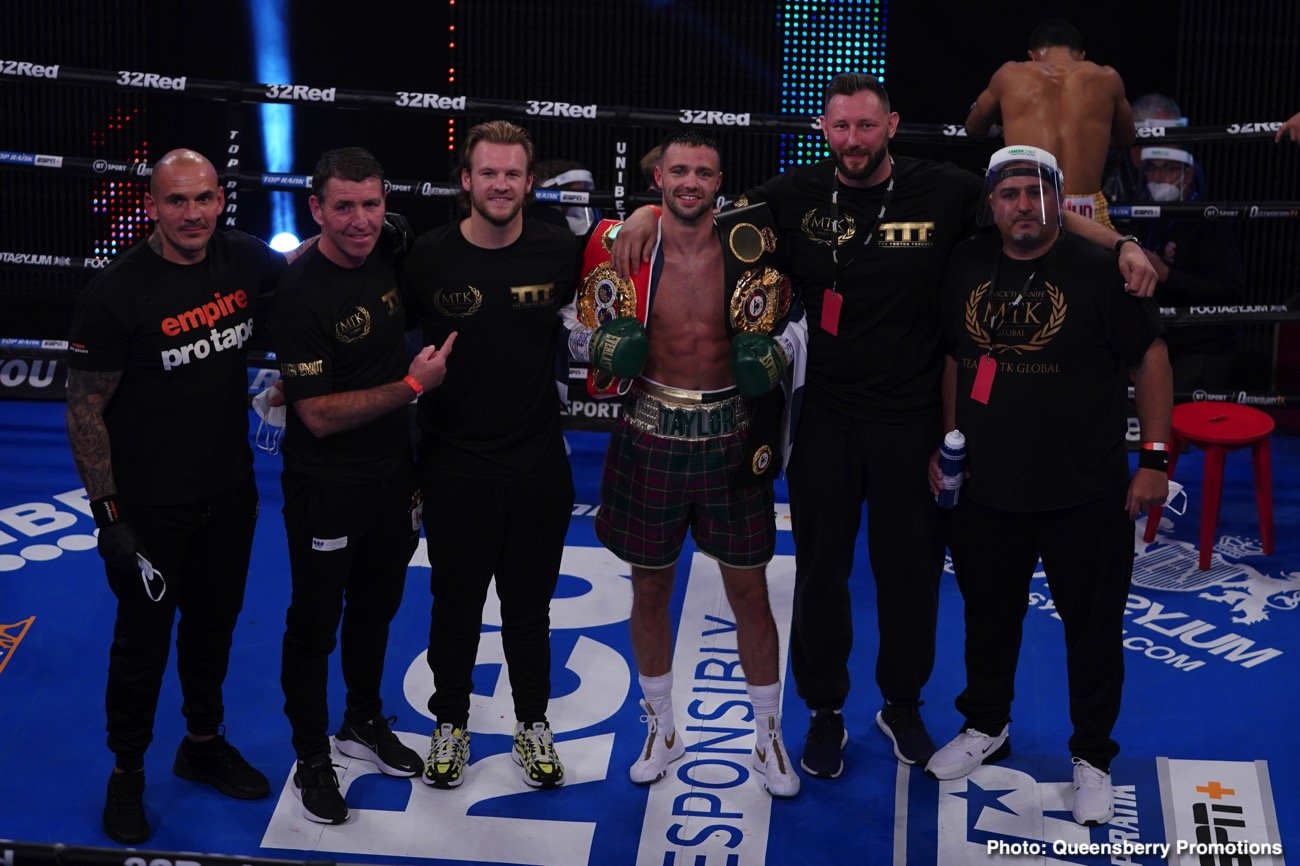 “I felt great—friendly and patient straightaway. I would have liked to have had a chance to show what I’ve been working on, and what Ben and I have been improving on. But you don’t get paid for overtime, and I got him out of there straight away.

“So I can go get my usual after the fight pint and pizza. So I’m looking forward to relaxing,” said Taylor.

Well, if Taylor wanted to show more skills, he should have taken it easy on his overmatched opponent because this guy looked like he didn’t belong in the same ring with him. Khongsong being the IBF mandatory, that should have tipped Taylor off ahead of time that he had a cushy job that he would slice through like a hot knife through butter.

Jermall Charlo: I’m the best middleweight in the world »