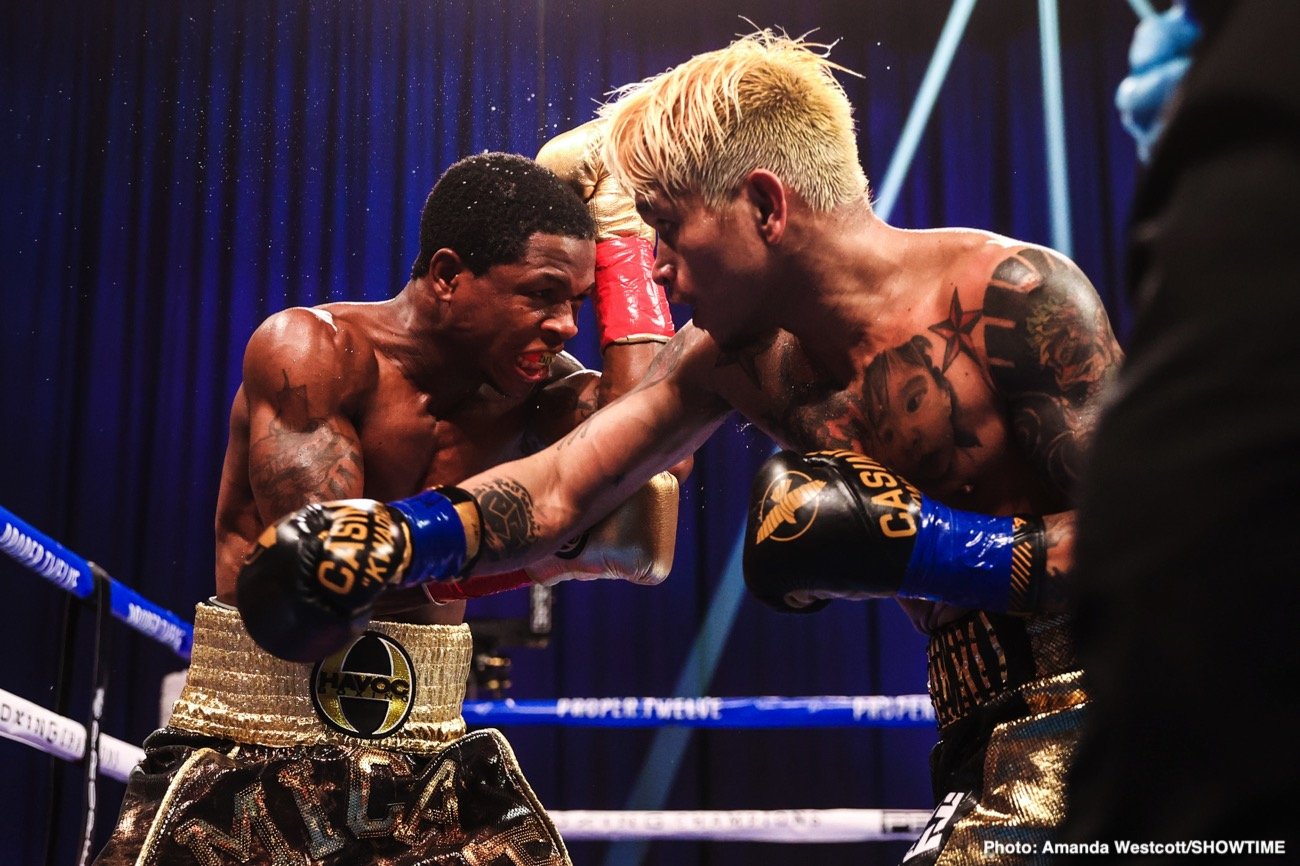 After the win, Casimero said that he wants the unbeaten champ Monster Inoue. If Casimero can’t get the Japanese star to face him, he says he wants WBA ‘regular’ bantamweight champion Guillermo Rigondeaux or WBC super bantamweight champ, Luis Nery. Casimero intends to take on the best at 118, and in the case of Nery, he’s looking to face the new 122-lb WBC champion.

It’s unclear whether Casimero would move up to super bantamweight to face Nery or look to face him at a catchweight of 120-pounds. Given Nery’s past struggles to make 118, it ould be a mistake to ask him to come down in weight to face Casimero at bantamweight.

Nery has been too inconsistent in making weight for the 118lb division for him to be relied on to get down to this weight class for a match against Casimero.

In what was easily the best performance on the Charlo twins doubleheader card on SHOWTIME pay-per-view, Casimero, 31, knocked Micah down in the 2nd round with a big left hand. When Micah got up from the knockdown, he looked like he was on rollerskates for the first time. 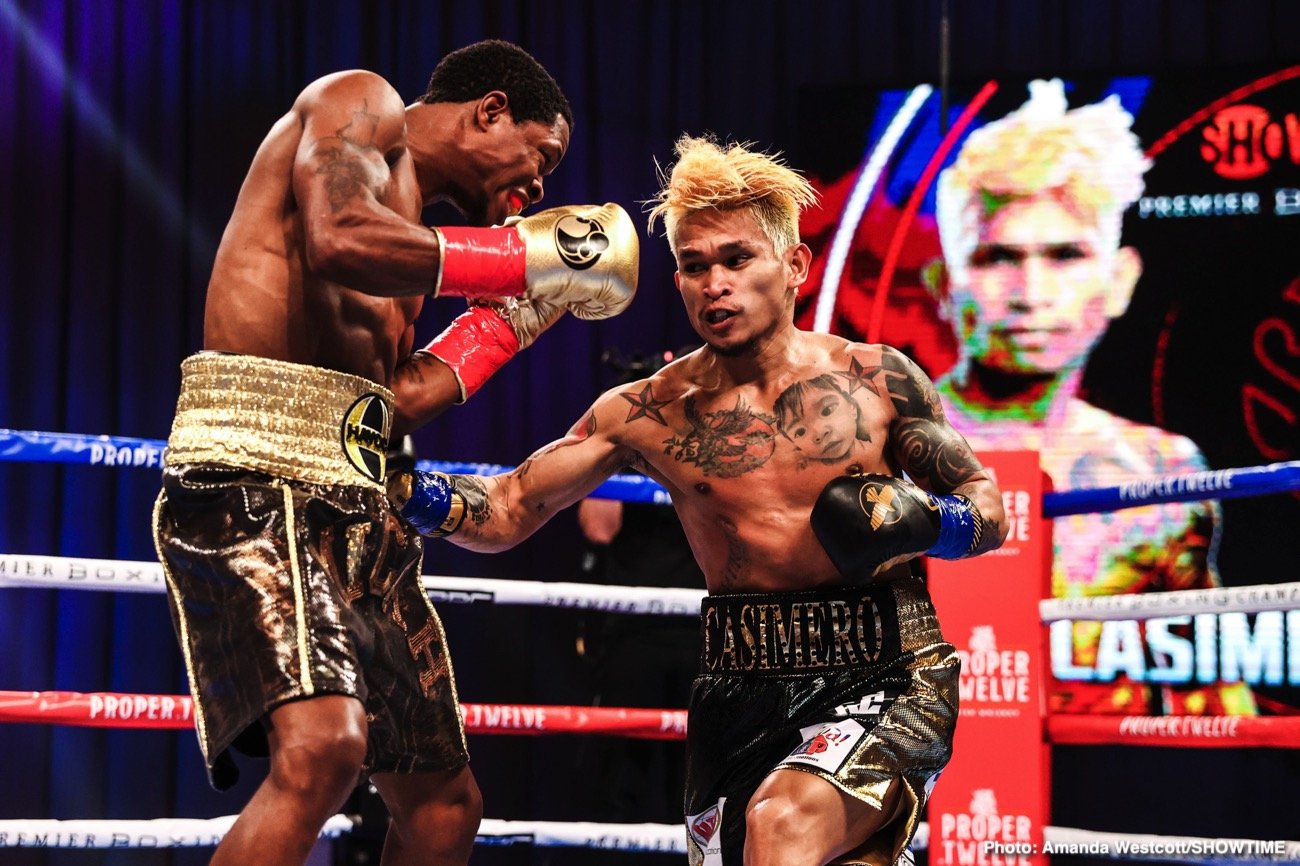 His legs were gone as he staggered to the corner. The referee Steve Willis let Micah continue despite him being badly hurt. Somehow, Micah was able to survive the round without being finished off.

In the third, Casimero went after the still hurt ‘Baby Faced Terminator’ Micah and unloaded on him until the referee stepped in and halted the fight. The time of the stoppage was at 0:54 of round three.

“I hurt him in the second round with an uppercut, but I knew I was facing a good fighter,” Casimero said about the 29-year-old Micah. “I didn’t expect to knock him out so fast. He’s strong, so I was prepared to go all 12 rounds.

“He ate my power uppercut. I said, ‘Oh, this is a good boxer. Duke Micah worked hard training. He hits strong. I’m surprised because my prediction is one hit. And I’m strong, man.

“I’m not expecting to knock him out,” Casimero said of Micah. “I knocked him out in three rounds. I think he’s a good fighter, and maybe he goes 12 rounds. I’m surprised,” said Casimero. 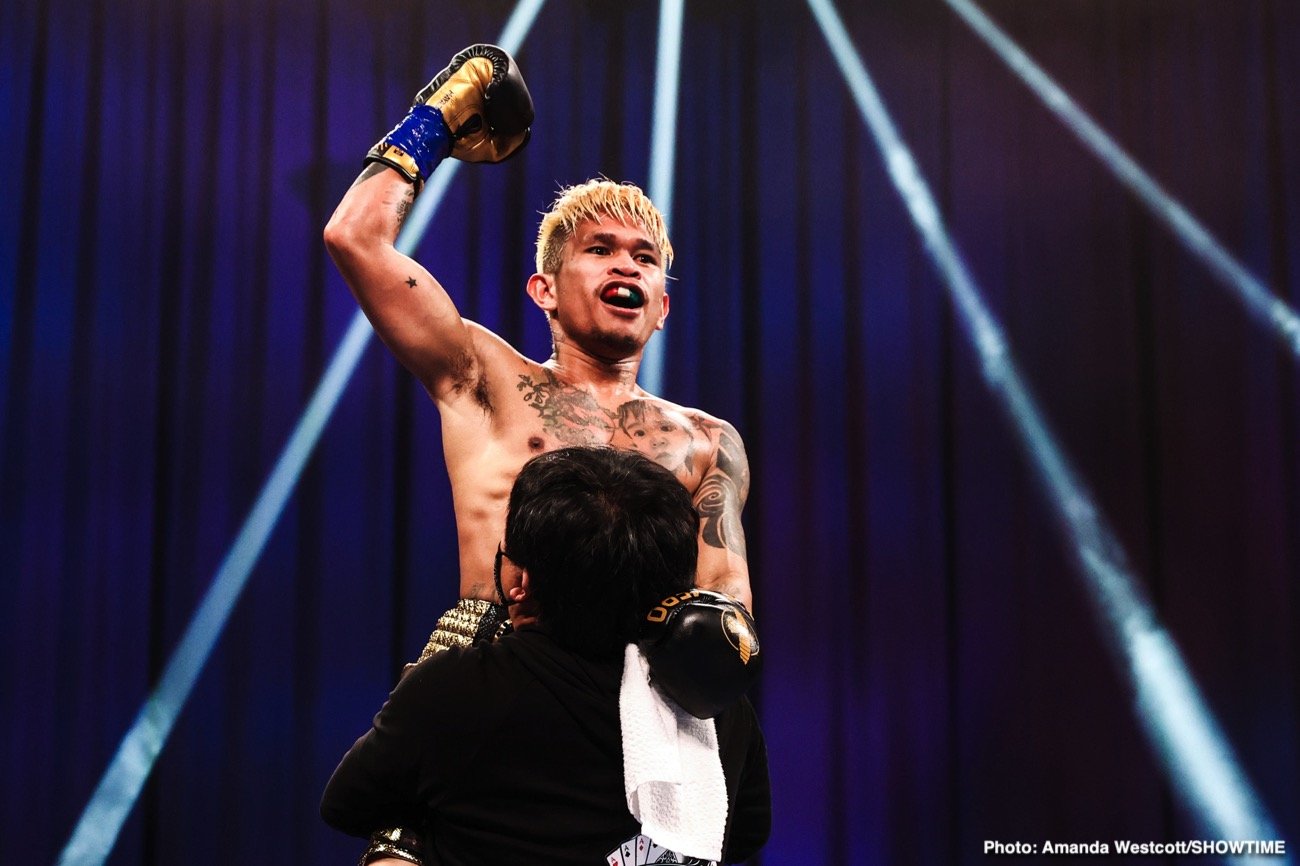 Micah was no pushover in this fight. He landed substantial right hands in the first round on the chin of Casimero, and it was a good start for the Ghanian fighter. You could tell that Micah came into the contest with Casimero with excellent pedigree.

Even without knowing that Micah fought in the 2012 Olympic, it was evident that this guy was cut from a different set of cloth from the average fighters. Micah is gifted, but that’s why it was all the more stunning to see the way that Casimero crushed him so quickly.

In the second round, Casimero got in close and shifted his offense into high gear, throwing a massive amount of power shots. Micah wasn’t ready for that sudden shift of energy by Casimero and was getting riddled with big punches. Casimero was going all out in close, taking shots, but delivering many hard punches that were doing damage.

Near the end of the round, Casimero landed a crunching left hook that dropped Micah hard on the canvas. It looked like Micah never saw the shot coming because it wiped him out. by that point, Casimero was throwing so many punches that Micah couldn’t see or block all of them.

He was trusting his chin to take the punches from Casimero, and that’s something that he couldn’t do. Casimero was throwing too many punches, and they were all thrown with a ton of power behind them. It’s a credit to Micah that he was able to make it to the end of round two, given all the punishment he took in the round. Casimero hit him with his best punches the entire round, and he only went down once.

The win for Casimero was the first defense of his World Boxing Organization 118-pound title that he’d won last November in stopping WBO bantamweight champion Zolani Tete in the third round in front of his boxing fans in Birmingham, England. 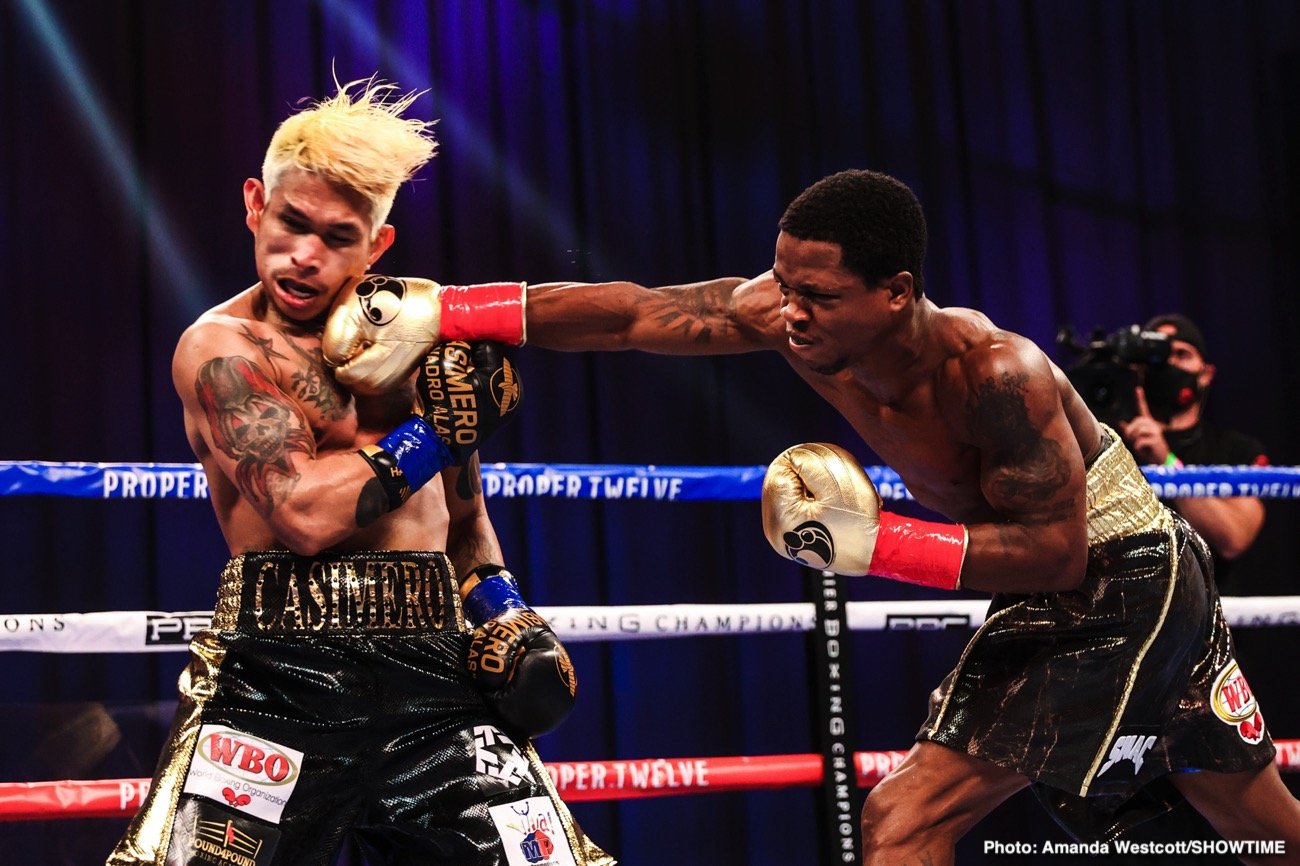 That victory made Casimero a three-division world champion, which is quite impressive when you realize that he started his career back in 2007 at light flyweight (108 pounds). Casimero has gone up ten pounds since turning professional 13 years ago, and he’s looking just as dominant at bantamweight as he did at light-flyweight.

Last Saturday night’s win for Casimero was his sixth consecutive since losing to Jonas Sultan by a 12 round unanimous decision in 2017. Casimero moved up in weight to 118 after that defeat, and he’s looking unbeatable in this division. It’s clear that Casimero knows that, and that’s why he’s so eager to face Naoya Inoue.

“I’m the real monster. Naoya Inoue is scared of me,” Casimero said at the post-fight news conference after the fight. “He’s next. I would have knocked out anyone today. If Inoue doesn’t fight me, then I’ll fight Guillermo Rigondeaux, Luis Nery, or any of the top fighters.”

“Naoya, come on. We’re ready. You’re a monster. No, you are not a Monster. You are a Japanese turtle. No Monster, man. Inoue is scared of me, the mother-f****. Come on. You’re next. I want Inoue,” said Casimero.

For Casimero to beat Inoue, he needs to get inside on him and stay there the entire time. If Casimero attempts to destroy the Japanese star from the outside, he will get taken out quickly.

Inoue is too fast, too sharp, and too powerful for Casimero to fight from a distance. The accuracy of Inoue would make him a constant problem for the Filipino knockout artist if he stays on the outside against him. 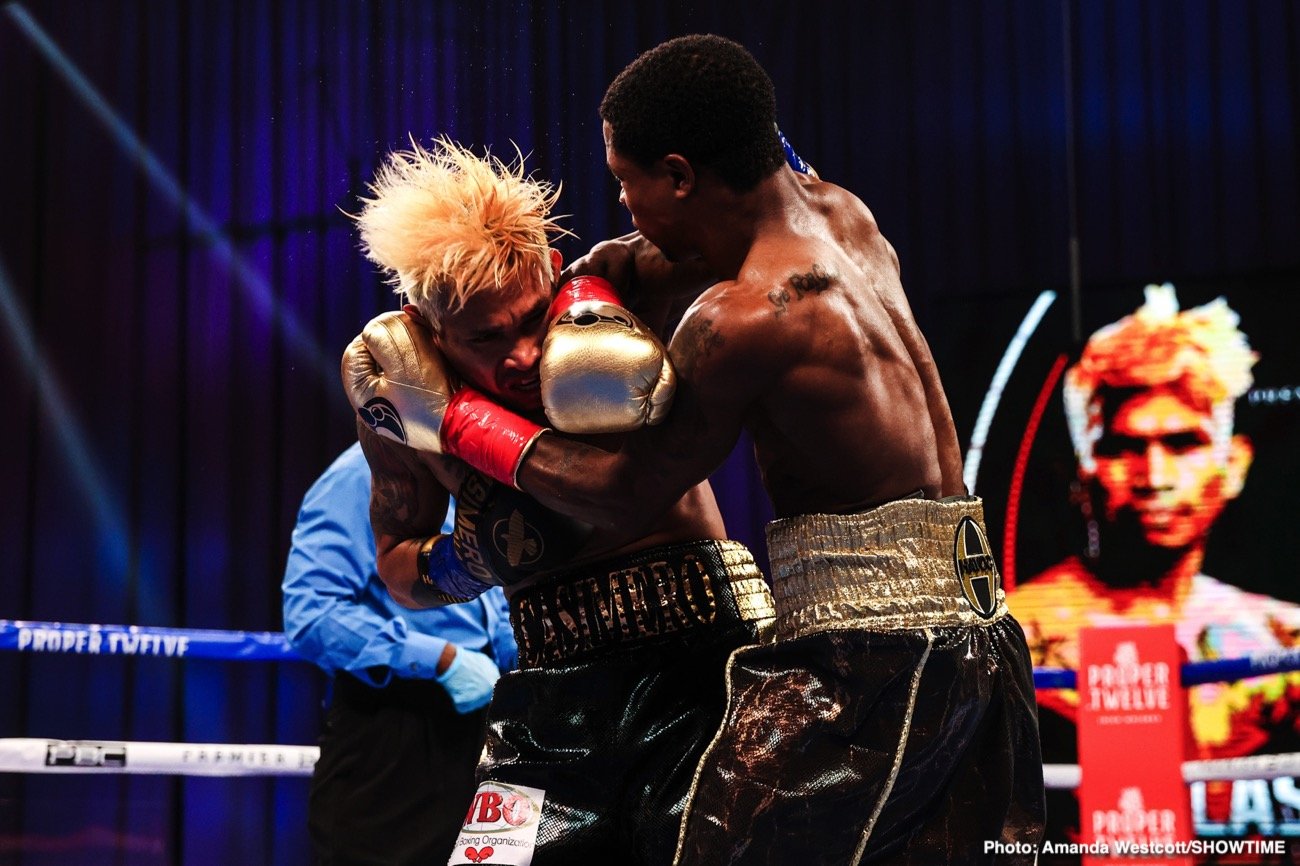 John Riel fight on the inside against Naoya

What we saw from Inoue in his contests against Nonito Donaire and David Carmona is that he’s not that great when he’s forced to fight at close range. Although Inoue is still incredibly dangerous due to his body punching ability in close, he’s nowhere near as useful as he is when he’s on the outside.

Casimero has an excellent chance of beating Inoue if he can keep the contest close and not give him space to use his power and hand speed. The best way to defeat guys with blazing hand speed and strength is to take the contest to the inside, which effectively neutralizes those assets.

The co-promoters for ‘Monster’ Inoue at Top Rank likely won’t make the unification match between him and Casimero until after the pandemic ends, as they’re going to want to take full advantage of their ability to bring in a vast live gate. They can’t do that right now during the pandemic because large groups of people aren’t allowed to attend boxing events in the States.