Hearn: Joshua will vacate WBO if he must; wants Fury before Usyk 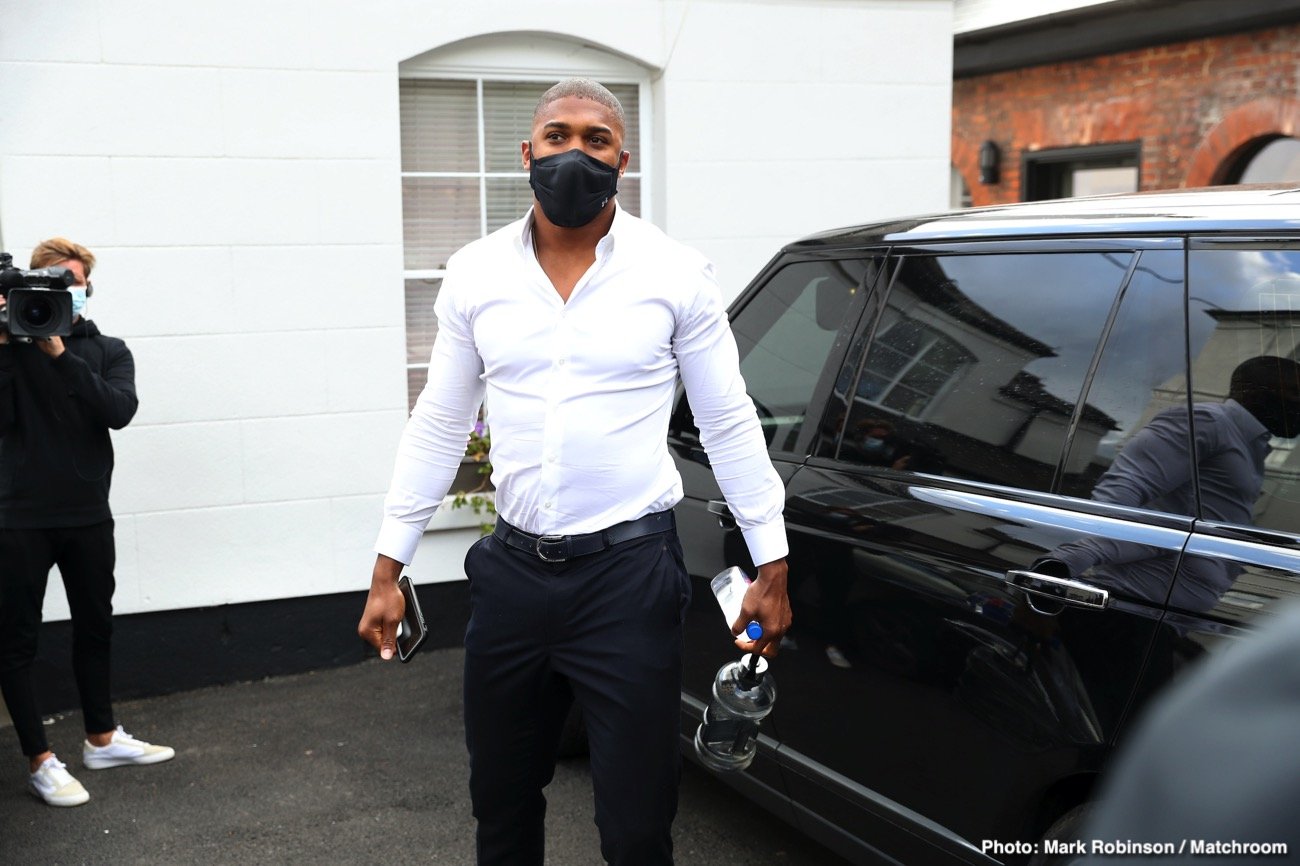 By Charles Brun: Eddie Hearn says Anthony Joshua will vacate his WBO heavyweight title if he’s put in the position where he’s being forced to face Oleksandr Usyk before he takes on Tyson Fury in 2021. Hearn states that IBF/WBA/WBO champion Joshua would prefer to keep all his titles if possible, but if it means he has to give up his WBO title to face Fury twice in 2021, then that’s what he’ll do.

Hearn is giving WBO mandatory challenger Usyk (17-0, 13 KOs) a heads up by putting it out there about Joshua intent on taking on Fury in the first half of next year. Usyk and his promoter Alexander Krassyuk insist that Joshua defend his WBO title against them after he faces Kubrat Pulev on December 12th.

It’s important that Usyk not push too hard for his title shot because he could wind up battling for the vacant title. Joshua would prefer to keep his World Boxing Organizaation title if possible, but he’s not going to keep it if it means he must fight Usyk first before he battles Fury.

Hearn is letting Usyk know that if he pushes Joshua to face him, he’ll wind up with the WBO title being vacated. At the same time, that might not be all bad for Usyk if AJ gives up his title, as he can fight #2 WBO Daniel Dubois for the belt. However, that’s a smaller money fight for Usyk than if he were to sit patiently waiting for Joshua to get done with his two matches against Fury. Besides, Usyk might be too small for Dubois, and he could lose to him.

You can understand Usyk’s frustration with the process. Like Dillian Whyte, Usyk has been waiting for a year for his mandated title shot against Joshua, and now he’s looking at having to wait for another year until 2022. Even if Usyk remains until 2022, there are no guarantees that the winner of the Fury vs. Joshua two-fight deal will face him. They might vacate the WBO title at that point, leaving Usyk to take on the gargantuan 6’5″ Dubois. 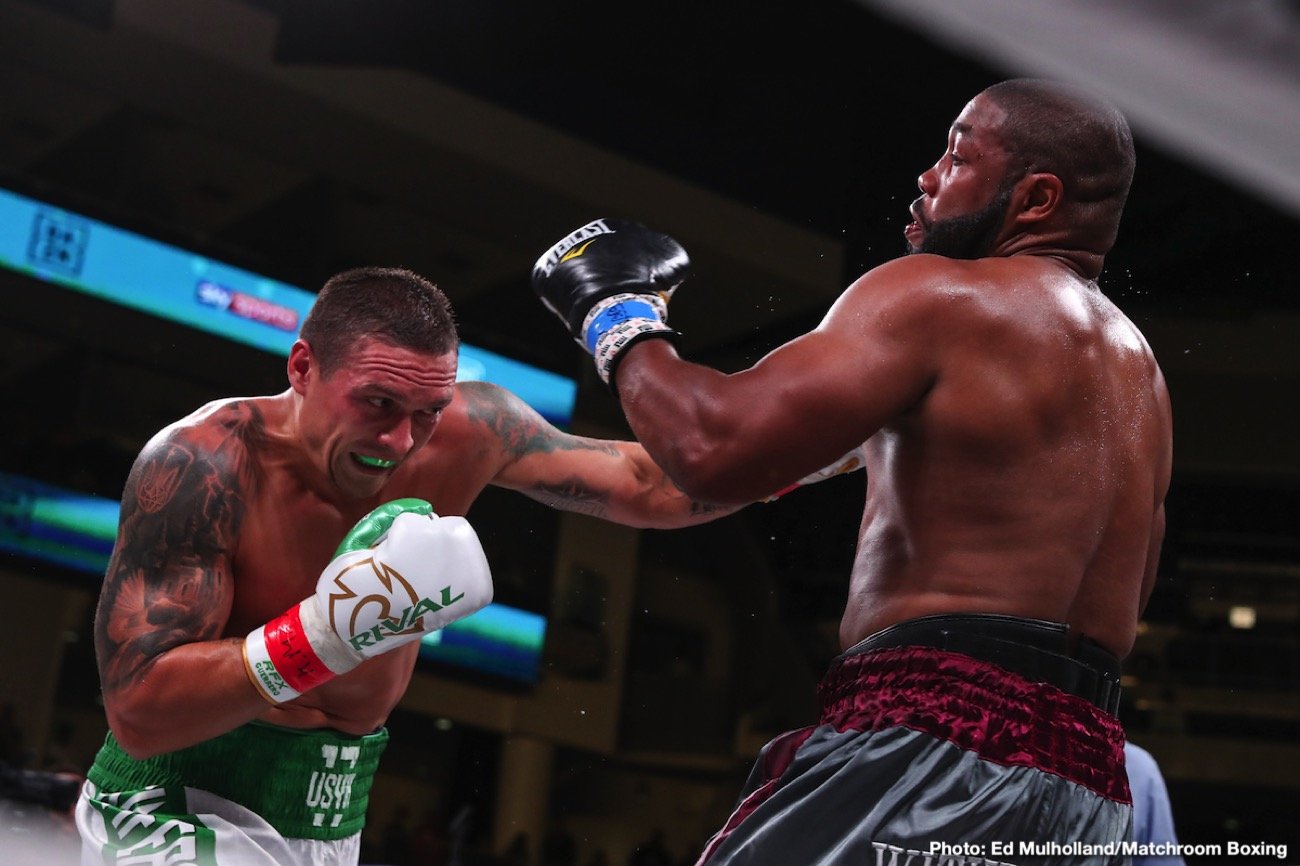 Joshua will vacate WBO to get Fury fight

“There’s been a lot of talk about ‘give up the belt,’ but the aim for Anthony Joshua is to be the undisputed heavyweight champion,’ said hearn to Boxing Social. “Will a belt gets in the way of him fighting Tyson Fury next? Probably not.

‘Will he vacate a belt and fight Tyson Fury next? Yes, I believe he would if he had to, but would he rather maintain all the belts? One million percent. I know Tyson Fury has said, ‘I already had all the belts.’ I know, but you’ve never been undisputed.

“I hope that means something to people because it means a lot to Anthony Joshua if we get to a position where AJ is fighting Fury regardless of whether the Wbo allows their title to be on the line.

“It’s almost like I want to go to Usyk and say, ‘Look, we’re going to vacate the title, but can we vacate it the day after the fight?’ I don’t care if the undisputed champ lasts for a day or ten years, but once you’ve won it, you’ve achieved that. In this day and age, it’s challenging to stay undisputed,” said Hearn.

What Hearn is saying is that he wants Usyk to sit and wait for his title shot against the last man standing, be it, Joshua or Fury. If Usyk, that’s not a good deal unless Hearn is willing to whet his beak with some step aside money.

If there were a guarantee that Usyk would get a fight against the eventual winner of the two Joshua vs. Fury fights, then it would be that bad. Usyk isn’t going to get a guarantee. Without that, he could wind up waiting for nothing. 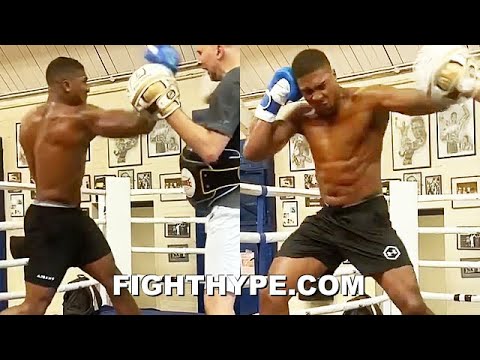 Joshua will fight Usyk if Fury gets injured

‘Terence Crawford had the best idea and the best example,” Hearn said. “He won the undisputed championship against [Julius] Indongo, and a day after, he had to give up two belts. I’m going to continue to work with those guys and be honest with them.

“If we’re going to vacate a belt, I’ll tell them, and we can try and find a solution. If that solution isn’t t the benefit of Oleksandr Usyk’s career, he won’t do it.

“At least we’ll be in a situation where he’ll know what’s happening every step of the way because we’ll tell him. But he’s got to beat Dereck Chisora first. He’s in a similar position as Dillian Whyte against Povetkin.

“Because AJ wants to fight Tyson Fury,” said Hearn when asked why doesn’t Joshua fight Usyk first, and then Fury. “There’s no fight that he wants more than fighting Tyson Fury. He wants to be the #1 heavyweight in the world.

“Right now, the only way we can determine who the best heavyweight in the world is by AJ fighting Tyson Fury. No one can dispute that. Whoever wins that fight will be number one. That’s the fight that AJ wants. Would AJ fight Usyk?  One million percent.

“If Fury got injured or if the talks broke down, or if for some reason that didn’t get over the line, he will fight Oleksandr Usyk if he beats Chisora. But I know he wants to fight Tyson Fury,” said Eddie.

I doubt that Usyk will feel satisfied at hearing that Joshua will face him if Fury suffers an injury and can’t fight him in early or late 2021. That’s not going to be music to Usyk’s ears.

“When I sit down with him [Joshua] after the Pulev fight and say, ‘Fury or Usyk?’ He’ll say, ‘Fury’ all day long,’ said Hearn, But if for any reason that doesn’t happen, he will fight Usyk in a heartbeat. When you say to Usyk, ‘AJ is going to do two fights with Fury.’

“If they fight, I can’t even lie to Usyk and say, ‘Okay, we’ll fight you next. Don’t worry.’ That’s what a lot of people do. ‘I promise you; you’ll get the winner.’ You’re not going to get the winner because they’re going to do two fights.

‘So that would be the reason for vacating straight after. He would love to keep the undisputed [status]. Listen, if Usyk waits for two fights, then he’ll fight Usyk after, but Usyk won’t want to, and he shouldn’t. He’s got the position.

“He’s not just going to roll over and say, ‘Go on, boys. Do what you want.’ He’s going to say, ‘Vacate or give me a couple of million, and I’ll wait.’ Fury has made it quite clear that he’s not bothered by all the belts. I don’t believe that, but AJ is.

“But that fight [Joshua vs. Fury] wouldn’t break down if one of the belts weren’t on the line. But I will do everything to try and find a solution to keep everyone happy. At least for the first [Joshua-Fury] fight, to get a chance to have all the belts on the line.

“I think the fights [Usyk and Fury] are as tough as each other,” said Hearn when told that Fury wants Joshua to leave Usyk alone. “Fury has huge size on Usyk, but AJ-Usyk and AJ-Fury, they’re both tough fights. Fury doesn’t want AJ to get beat,” said Hearn.