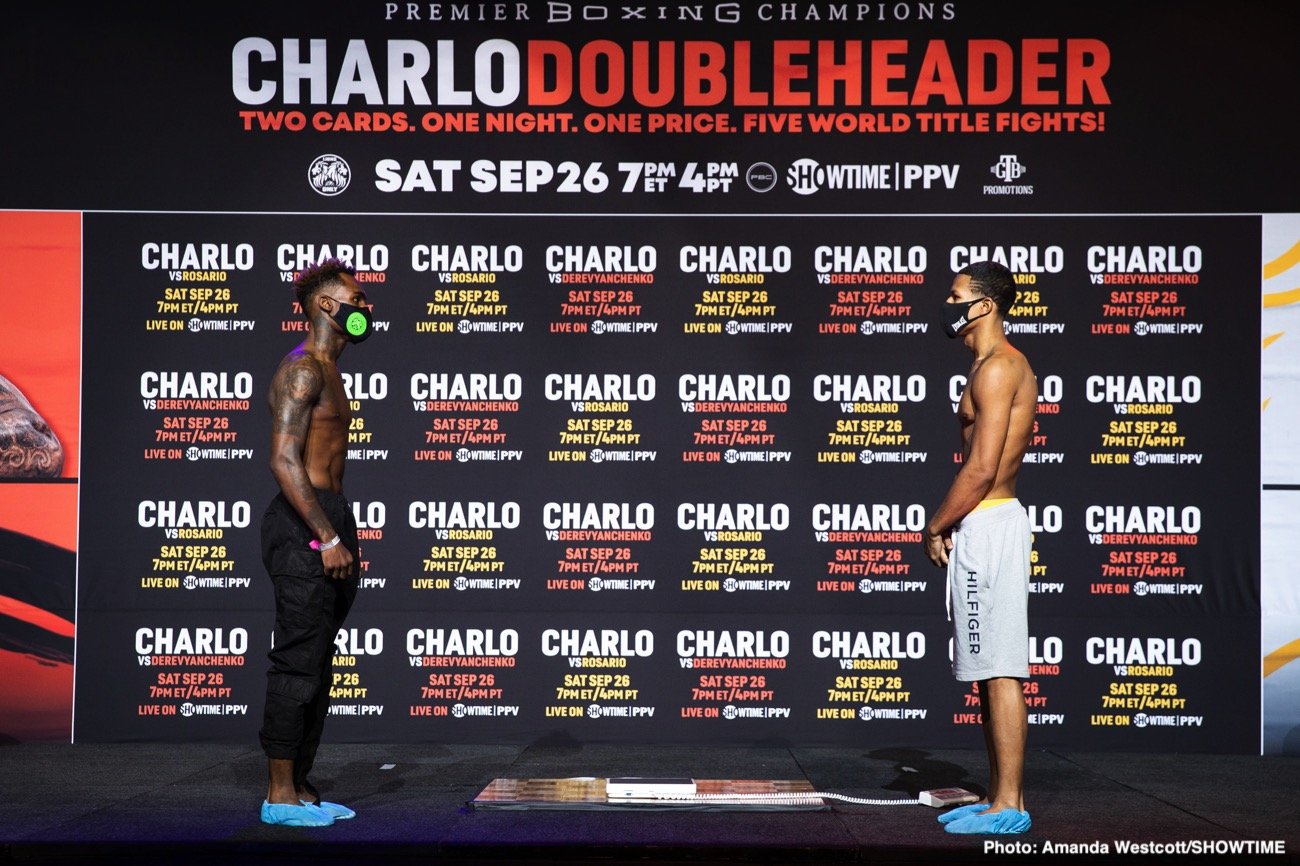 By Allan Fox: Promoter Leonard Ellerbe predicts knockouts for both Jermell and Jermall Charlo in their fights against Jeison Rosario and Sergiy Derevyanchenko (13-2, 10 KOs) this Saturday night at the Mohegan Bay Casino in Uncasville, Connecticut.

Despite what Ellerbe says, these are two fights that are close to being 50-50 fight affairs. The only reason you’ve got to give the Charlos the edge is that they’re the A-side in both fights. That means if the contests go to the scorecards, the Charlos will have an excellent chance of winning over their B-side opponents.

Ellerbe is high on both Charlo brothers, and he expects them to dispatch their opponents Rosario and Derevyanchenko early in the two contests.

As far as the $75 price tag for the Showtime doubleheader pay-per-view for the Charlo brothers, Ellerbe says it’s a “pay-per-view steal” because of the great fights on the card. Nevertheless, the boxing public would have preferred a less high price for the card.

The organizers could have cut the undercard off, and the fans wouldn’t have minded paying to see the Charlo brothers at a minimum. 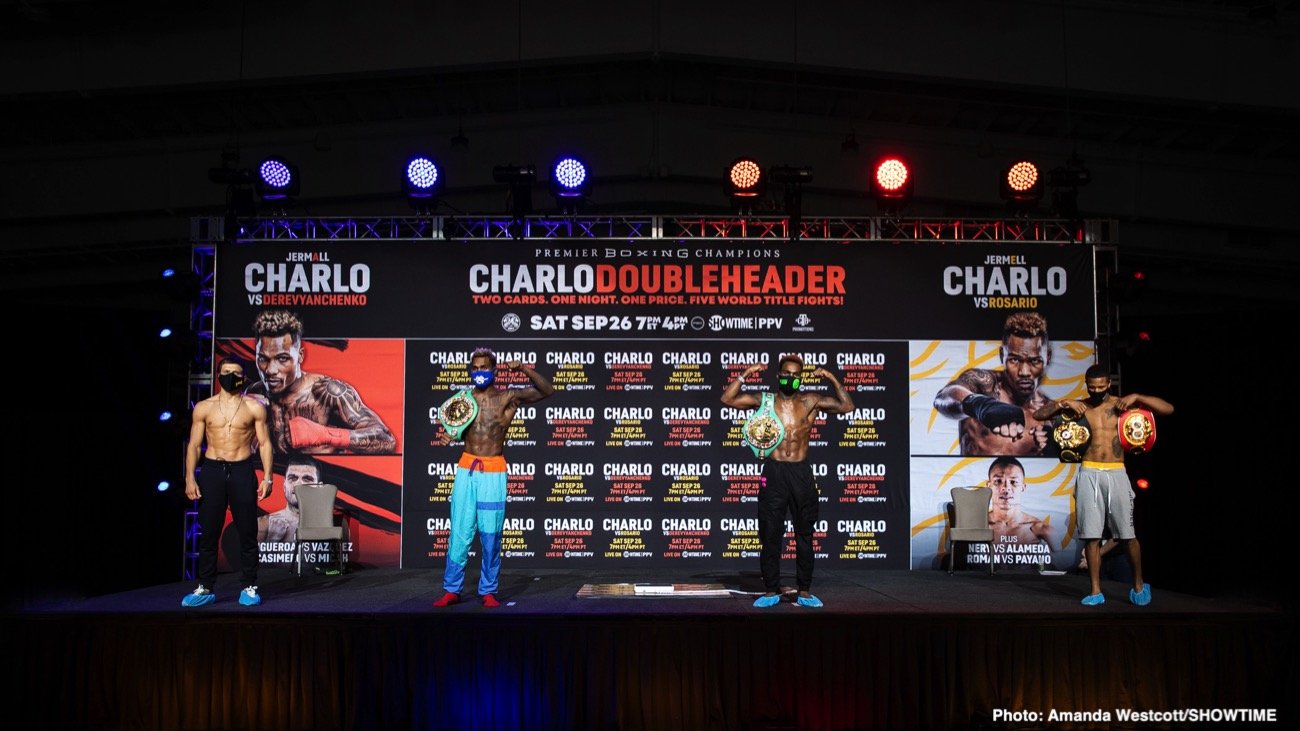 Charlo KOs Derevyanchenko by 6th round

“I’m really looking forward to the Jermall-Derevyanchenko fight. I think that fight ends in a knockout,” said Mayweather Promotions CEO Leonard Ellerbe to Fighthype. “He’s [Derevyanchenko] bringing a lot of experience to the table.

“In the Danny Jacobs’s fight, he fought a good fight. One thing I do know is he will be well prepared because Andre Rozier is a tremendous trainer, so he’ll have him ready to go.

“But overall, Jermall with his physical strength, his boxing IQ, and his ability to get it done. This is the moment that he’s been waiting for, both brothers, to be on the big stage to show out. I think that fight ends with a knockout by the middle of the fight.

“Yeah,” said Ellerbe when asked if he thought Derevyanchenko beat Gennadiy Golovkin. “You saw in those two fights [against Golovkin and Danny Jacobs] how he [Derevyanchenko] came out,” Leonard said.

Derevyanchenko hit the deck in the first round against both Gennady Golovkin and Daniel Jacobs. The knockdowns cost Derevyanchenko the fight, as he fought well enough to win in the remaining 11 rounds in both contests.

The problem that Jermall has is he’s a slow starter, and he doesn’t go after his opponents until the midpoint in his fights. If Jermall cannot take advantage of Derevyanchenko right from the start of the battle the way Jacobs and Golovkin did, he could be in for a tough night.

Ellerbe conveniently didn’t mention Jermall’s controversial 12 round decision win over Matt Korobov from 2018. What Charlo can’t afford is another questionable win like we saw in that fight. That might not bother Ellerbe if Jermall continues to win in that fashion, but the boxing fans will view him as a fake if he keeps getting gift decisions.

“He [Sergiy] was dropped in both of those fights in the first round. I just think that with the way that Jermall has been preparing, he’s just an animal. I expect him to get him out of there in the middle of the fight.

“With his skill-set and with Derevyanchenko being aggressive, that plays right into Jermall’s strengths. Yeah, that was a tremendous punch,” Leonard said in commenting on Jermall’s knockout uppercut that he landed on Julian ‘J’Rock’ Williams in their fight in December 2016. ”

Both Charlo brothers have a great IQ, and they always come in tremendous physical condition. Again, with all the attributes that Jermall has, it’ll be too much [for Derevyanchenko]. He’ll overwhelm Derevyanchenko in the middle of the fight.

Jermall with a lot of opportunities

“There are some very exciting match-ups in the future for him,” Ellerbe said of Jermall. “That’s why he’s licking his chops on Saturday night to send a big statement to the guys at 60 and 68.

“He’s [Charlo] huge [for a middleweight]. Again, whatever he’s comfortable with. Those guys know their bodies more than anything, and I think he fits well in either weight class. He’s so big and strong, athletic with all the skills in the world, and he’s a force to be reckoned with.

“I’m very familiar with him [Chris Eubank Jr]. Well, that’s a tough match-up for him,” Ellerbe said when asked how would Eubank Jr match-up with Jermall.

“Chris is a good fighter, but that’s a tough match-up for Eubank. Most definitely [Eubank Jr would be the underdog against Jermall Charlo],” Leonard said.

Well, if Jermall beats Derevyanchenko, he’ll have opportunities with the PBC fighters, and some of the Top Rank guys. There’s no chance that Jermall will get a fight against Canelo Alvarez or Gennady Golovkin. 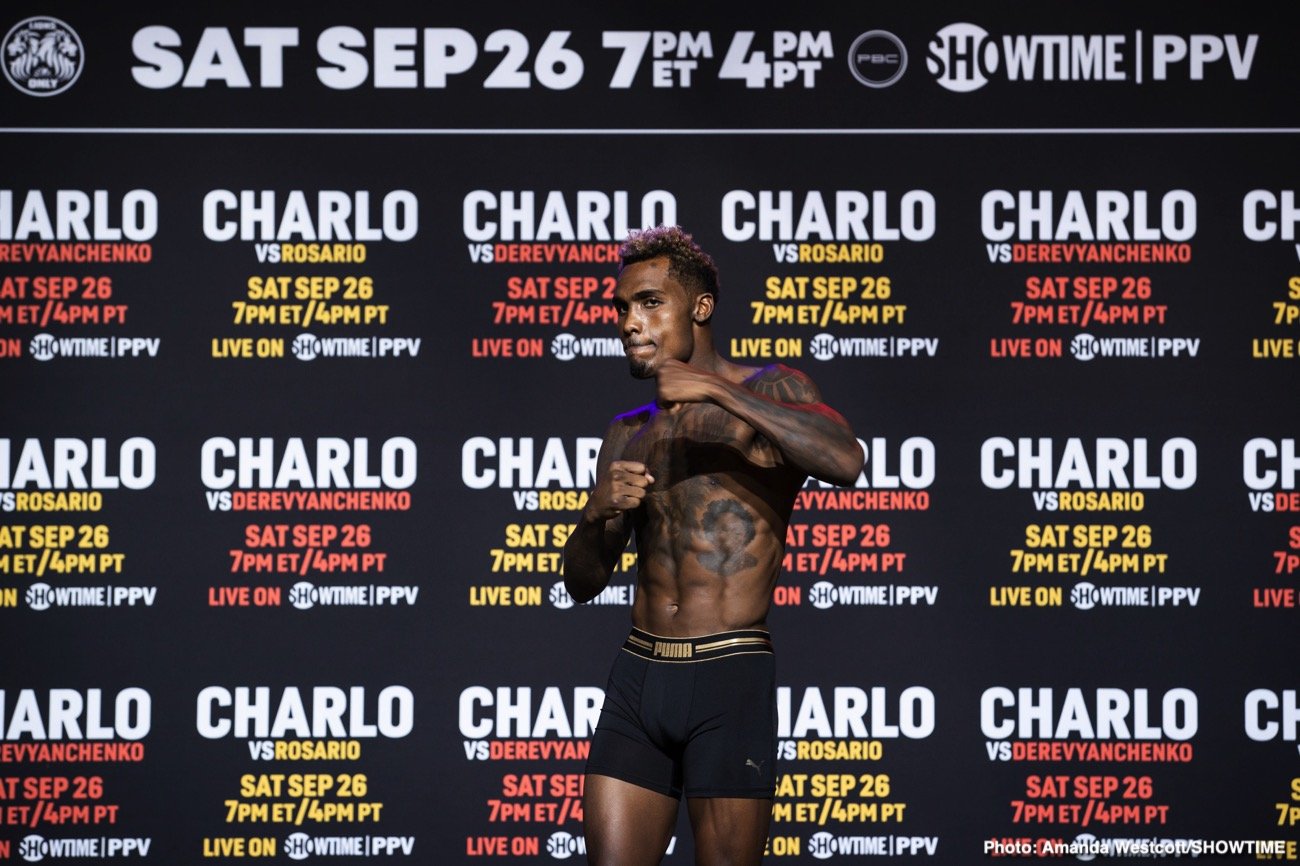 If Jermall wants to take risks by fighting guys his size like Callum Smith, David Benavidez, Artur Beterbiev, and Dmitry Bivol, he’s got many opportunities for big fights. But it’s unlikely that Jermall wants any of that smoke. He knows his limitations as a fighter.

Jermell wants to make a statement

“He’ll have him prepared for Saturday night for anything Rosario brings. I expect that fight also to end by a knockout too. I expect Jermell to stop him.

“All of these are entertaining match-ups. This is a pay-per-view steal,” Ellerbe said of the Charlo doubleheader. “I wouldn’t say that,” Leonard said when asked if Rosario is ‘chinny.’

“There will be some things that they’ll be able to exploit in the fight. I expect that to go to the later rounds, and with Jermell’s ability to make adjustments, I think that coming down the stretch, he’ll stop him.

“He’s [Jermell] gained valuable experience in these tough fights that he’s had. In the Harrison fight, Tony was winning, but he took his eyes off the prize, and that’s what kind of happens sometimes.

“He came up a little short. At 154, everybody can fight, and that’s why Jermell wants to send a clear message to the other guys that he’s that guy. He wants to wipe out the division.

“He wants to make that big statement on Saturday night, and what better way to do it than to have three belts?’ said Ellerbe about Jermell.

If Jermell can knockout Rosario the way he did Erickson Lubin in 2017, he would be making a big statement on Saturday night.

Ellerbe predicting a win for Charlo over Rosario

“He’s extremely explosive, and again, he’s been getting a lot of experience in these fights with these very good fighters,” Ellerbe said of Jermell. “That’s the advantage. That he’ll have coming into this fight [with Jeison Rosario].

“He’s been in there with the top guys at 154, and then there are other top guys that are gunning for him that he hasn’t fought. But that’s what happens when your the guy in the division, and you’re talking the talk and walking the walk.

“I expect him to get it done in impressive fashion on Saturday night,” Ellerbe said in predicting a win for Jermell.

“I’m excited about any of the match-ups [in the junior middleweight division]. I know that ‘J-Rock’ is itching to get in there and mix it up with those guys. He’s a tremendous fighter himself.

“They [Charlo brothers] have a chip on their shoulders, and I actually like that,” Ellerbe said. “They don’t play, and they’re always looking to prove a point. 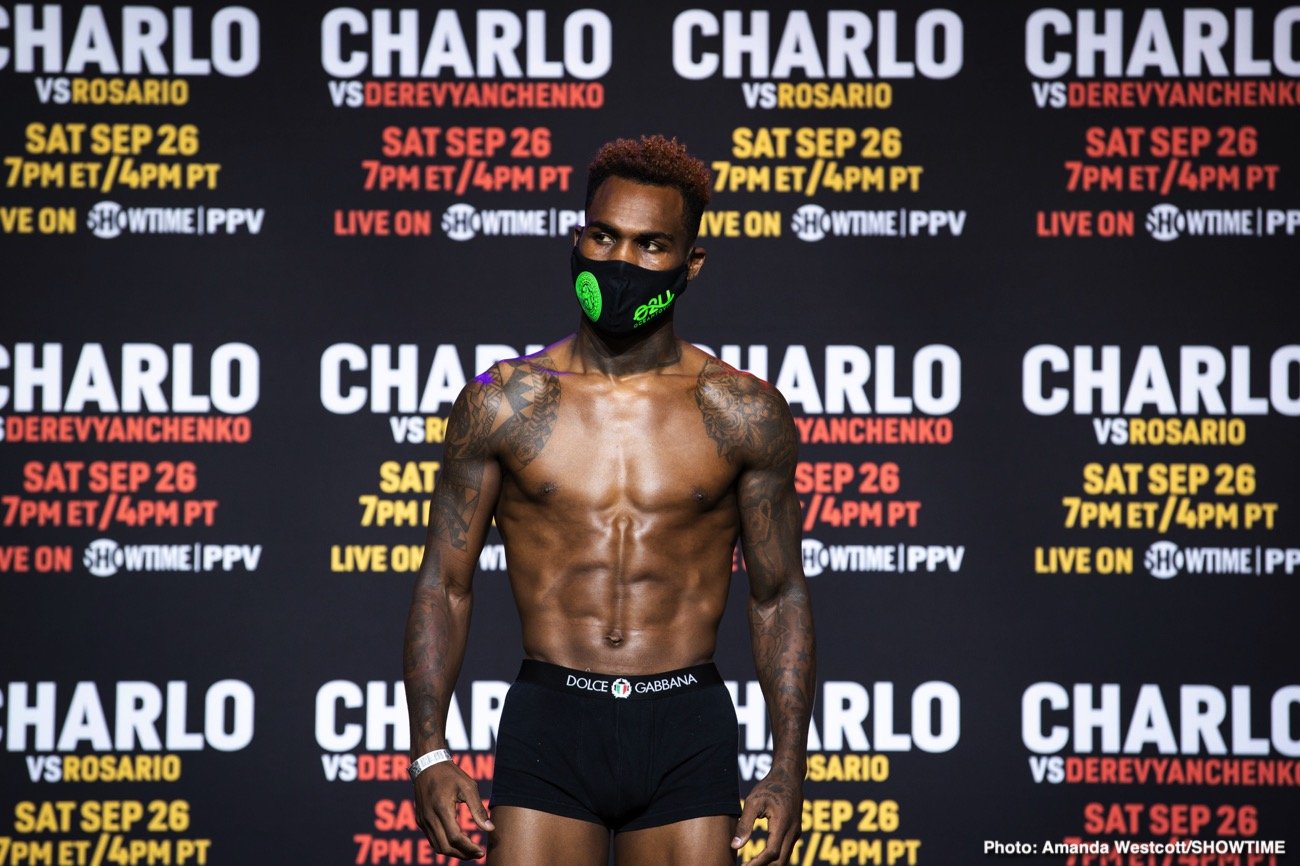 “In boxing, some fighters are more mild-mannered, but I like guys that talk s***, especially when they back it up. So I like that about both of those guys.

“Jermell really pops a lot of s***, and I love that about him. He believes in his skill-set, and he lets you know that he doesn’t play,” Ellerbe said.

As long as Jermell doesn’t lose again, he can keep trash-talking, but it’ll look bad if he gets beaten again and then says he disagrees with the scoring of the fight. When Jermell lost to Tony Harrison, he didn’t take the high road and admit that the better man beat him.

If Jermell loses on Saturday, we might see him act in the same way as the last time he got beaten. I guess Ellerbe likes that kind of stuff.