Oscar De La Hoya coming back: Is this a good idea?

By Max Seitelman: Boxing legend Oscar De La Hoya has made up his mind about his desire to retire to the ring at age 47, and he says he’s going to begin sparring soon.

Fans are having mixed reactions about the ‘Golden Boy’ returning after being retired for 12 years since 2008. While some people applaud De La Hoya’s bravery in wanting to come back, others think he’s bonkers and they worry about him. Is Oscar going through a mid-life crisis?

One reason why fans don’t see it as a bad idea for the former six-division world champion De La Hoya to come out of retirement is his age.

He’s not nearly as old as 54-year-old Mike Tyson, 58-year-old Evander Holyfield, or 51-year-old Roy Jones Jr. Those legends of the sport are all making a comeback for exhibition matches, and the fans have been raving each of them.

Oscar wants to fight the best

The only reason why some boxing fans aren’t excited about De La Hoya (38-6, 30 KOs) is he hasn’t started working out, and showing video clips the way Jones, Holyfield, and Tyson all have.

One thing that is different about De la Hoya in comparison to those fighters is the fact that he’s interested in taking on the top tier fighters at 154 and 160. De La Hoya isn’t interested in facing retired former greats in exhibition matches the way Jones, Tyson, and Holyfield are doing.

De La Hoya says he wants to fight the best, which means he could wind up facing someone like Canelo Alvarez, Gennady Golovkin or Jermell Charlo.

“It looks like De La Hoya is edging closer to a comeback,” said Chris Mannix to DAZN. “De La Hoya told ESPN, ‘The rumors are true, and I’m going to begin sparring in the next few weeks.’ Oscar turned 47 last December, and last fought in 2008. ”

It’s possible that De La Hoya may give up on his comeback as soon as he starts sparring, and he discovers how far behind he is from the guys he’s working out with. De La Hoya probably won’t spar a world champion, which might make it more dispiriting for him if he royally gets worked over.

Taking a pounding in sparring from a fringe contender or a second-tier level fighter will be a bitter pill for De La Hoya t swallow, and he could quickly give up.

“I remember having a conversation with Sugar Ray Leonard. I said, ‘Ray, why did you keep coming back after all the great things you’ve done, and all your accomplishments?’ He said, ‘I miss the action, I miss the lights and the roar of the crowd.’

“That’s what fighters miss and they can’t duplicate it, and it’s only inside the ring that you get the thrill of being alive. But at 47, it’s way too dangerous.”

“I’m not buying it because he still has to go through the process of sparring for the first time seriously in 12 years, and I don’t think that’ going to go all that well,” said Mannix of De La Hoya. 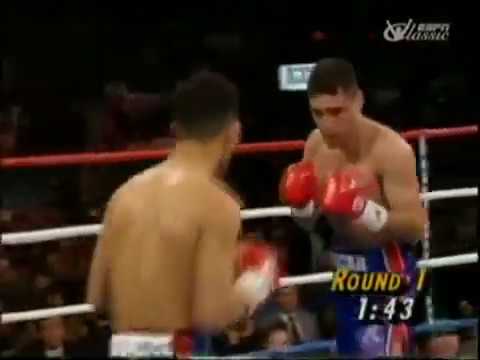 “He’s going to realize that his reflexes are a lot slower, and his ability to take a punch isn’t as well as it used to be. He’s going to back away from it. I don’t think he’s going to follow through with it.

“Besides, not only that. The idea of him not only coming back but fighting a top tier guy is insane. Do we really need to see Jermell Charlo picking him apart, and do we need to see one of the top guys like Golovkin or Canelo to knock him senseless?

We don’t know how Oscar will react against a top-flight 154-pounder until he gets in there with him. What De La Hoya has going for him is his boxing skills and the experience in fighting the best.

You can argue that none of the top junior middleweights have ever had a real test during their careers.

No one will talk Oscar out of coming back

“We just don’t need to see this. When you’re a fighter, you’re always going to feel that tug to get back into the ring, but Oscar needs to have some people in his camp talk to him. They need to tell him, ‘this is not only a bad idea, but it can also be dangerous.’

“He could wind up getting beaten up pretty good if you take on a top guy at junior middleweight or middleweight division. I hope he listens to them because I think Oscar De La Hoya has a bright future as a promoter.

“He’s still one of the most visible people and former fighter in all of boxing. It’s just that his boxing days are so far behind him that he needs to call it quits.”

If you’re with Golden Boy Promotions, it probably wouldn’t be a good idea to approach Oscar to try and talk him out of returning to the ring. You want to be supportive of him, as you would for anyone attempting to tackle a difficult task.

No one wants to be around people that are negative, and that’s one reason why it’s doubtful that De La Hoya’s co-workers will attempt to reason with him about the wisdom of returning to the ring.

Things could go wrong for the ‘Golden Boy’

“That’s what made them accomplish the things. They always think they have one last fight, and that one last fight is usually the bad one. De La Hoya, we already know what happened in his last fight.

“He got retired. He didn’t come off of the stool [against Manny Pacquiao in 2008]. this time around at 47, no matter who he fights, it’s only going to be worse. I don’t like the idea, and I don’t like any of these legends, these greats coming back and getting into the ring.”

Given the period of time De La Hoya has been out of the ring, if things go wrong for him in his first comeback fight, it could be over quickly. If De La Hoya isn’t up to the task, he’ll likely get knocked fast.

That’s usually what happens when an older fighter returns to the ring after a long layoff.

“Oscar most if he’s thinking about fighting a real fighter,” said Max Kellerman to ESPN when asked who he’s worried about most between Mike Tyson, De La Hoya and Roy Jones Jr in making a comeback.

“Oscar in the last time he was in the ring, it wasn’t that he couldn’t handle himself, but that was years and years ago. If you’re in with a real fighter and not an exhibition but in a real prize fight with millions of dollars on the line, the expectation is you try to go out like a champion.

“At Oscar’s age, that would be dangerous. So I would be much more worried about Oscar.”

We’ll be able to learn more about the risk that De La Hoya is dealing with when we find out who he’s planning on facing in his first fight of his comeback.

Unfortunately, there’s still a long ways to go before De La Hoya reveals who he plans on facing. Oscar could change his mind about coming out of retirement, which would make this discussion meaningless. The way De La Hoya is talking, he’s probably not going to back down.

“I’m sorry but I would be much more worried about my boy Roy Jones Jr,” said Stephen A Smith. “He has no business being inside the ring with Mike Tyson, even with 12-ounce gloves.

“I know its’s just a video on social media of Mike Tyson losing weight, but we’ve seen Roy Jones get knocked out on a couple of occasions. Tarver took him out, and Glen Johnson, that knockout in the 9th round was ugly, when he hit his head on the canvas and he was on the ground shaking.

“We saw him get knocked out by a guy [Enzo] Maccarinelli or something like that in Moscow. Some no-name guy. Oscar De La Hoya could go into the ring. He hasn’t fought in 12 years since Manny Pacquiao, but he was always a damn good boxer.

“Even when he lost to Pacquiao, he just refused to get up off the stool after he was getting beaten up by Manny Pacquiao. We’ve seen Roy knocked out. We’ve seen him seriously hurt where medics ran into the ring.”

There’s an argument that can be made that Roy Jones Jr is taking a bigger risk facing Mike Tyson than De La Hoya is in making his comeback, but we don’t know who Oscar is facing yet.

Certainly, if De La Hoya fights Canelo or Gennady Golovkin, then he would be taking a bigger risk than Jones is against a physically old and shot Mike Tyson.

GGG is more or less still close to his prime, whereas Canelo in the zenith of his career