By Kenneth Friedman: Carl Froch suspects that Mike Tyson could tire out quickly and lose patience and start fouling Roy Jones Jr in their eight-round exhibition match next month on September 12.

The 43-year-old former IBF/WBA/WBC super-middleweight champion Froch notes that it’s hard enough for the average professional fighter to fight four rounds without gassing out. Still, for a 54-year-old like Tyson (50-6, 44 KOs), it’s going to be a lot tougher.

Moreover, Tyson will be wearing 16-ounce gloves, which are a lot bigger than the 10-ounce gloves typically used for heavyweight matches. Froch says it’s going to be a lot harder for Tyson to knockout Jones with gloves that large, and he might not be able to do it.

Jones, 51, fought just two years ago, showing no signs of having cardio problems in easily beating Scott Sigmon by a 10 round unanimous decision in February 2018. In contrast, ‘Iron’ Mike hadn’t fought since June 2005 when he lost to Kevin McBride by a six-round stoppage.

“Would he lose the plot like he did against Holyfield and take a chunk of the old ear off?’ Carl said, on his Froch on Fighting podcast.”There could be a danger where he gets really frustrated.

“Those 16-ounce gloves are going to be more difficult to knock his opponent out. And then they’re going to be blowing out of their a*** after three or four rounds, surely?’

The video clips of Tyson has been posting on social media show him making brief bursts of punches, but they don’t show continuous punching by him.  Boxing fans don’t see whether Tyson is gassing out after throwing the shots, and in need of a rest break. So the clips could be misleading, giving fans a warped view of Tyson’s actual state of health. 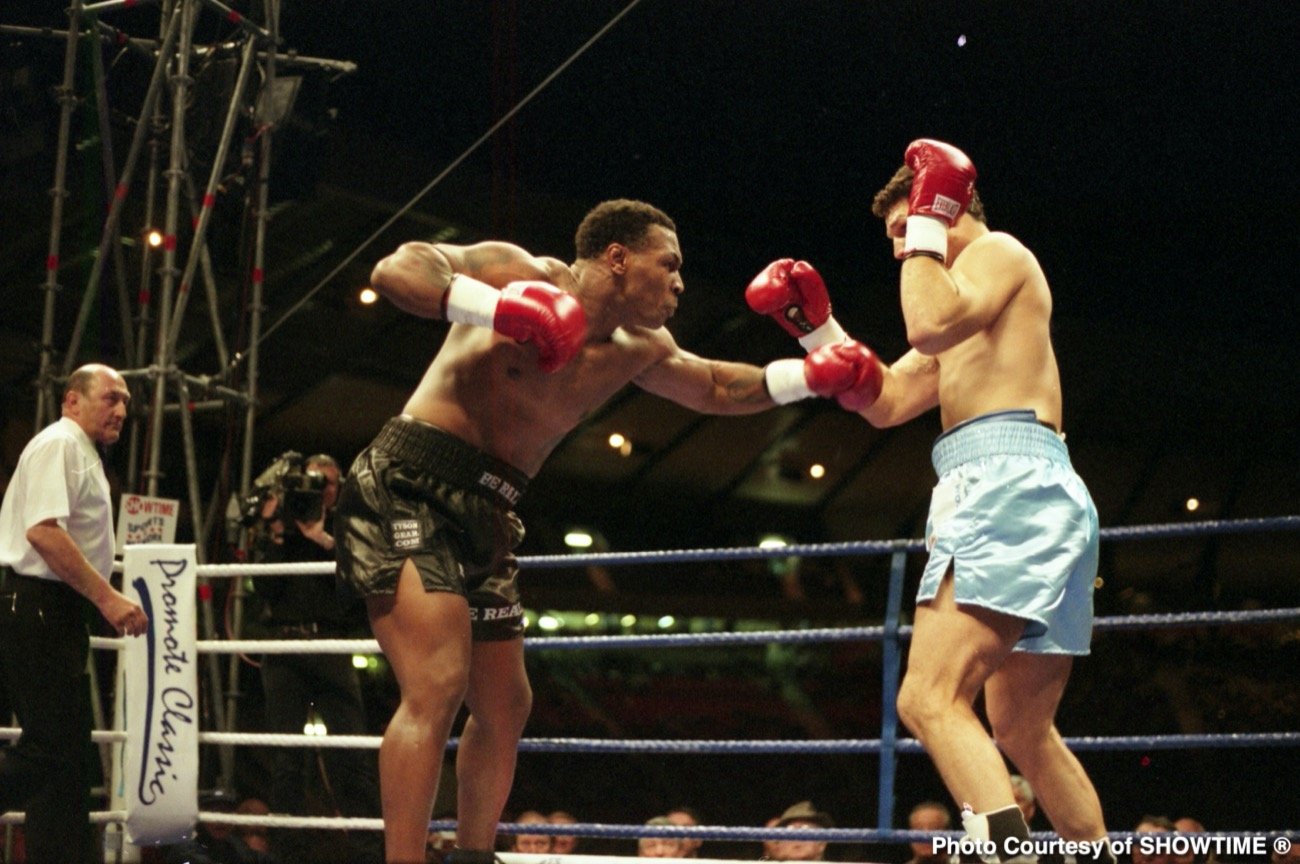 Tyson smokes, and that’s a bad habit for a boxer who needs to have the full lung power to be able to fight hard for an extended period. What happens if Tyson is unable to knock Jones (66-9, 47 KOs) out quickly on September 12. Does Tyson then all apart like he did in his losses to McBride, Danny Williams, and Lennox Lewis? It’s highly possible.

Froch suspects that Tyson might resort to biting if things get bad for him against Jones, but that’s a little hard to believe. When Tyson was disqualified in the third round against Evander Holyfield in June 1997, it was out of retaliation for being headbutted.

Holyfield likely had clashed heads with Tyson before in the first fight, so he reacted with anger when it happened in the rematch.

Tyson will find it difficult to recover

‘We’re blowing out of our a*** after four rounds as young professional fighters, we just manage the recovery and breathe differently and go a bit flat-footed through the fight,’ Froch said.

Jones has already made his game plan public by saying that he’s going to stay away from Tyson early on and then try to take him into the deeper rounds to wear him down.

It’s the perfect plan for Jones, but he’s still going to have a lot of danger in the first four or five rounds when Tyson is at full strength. What we saw in Tyson’s losses to Kevin ‘ The Clones Colossus’ McBride and Danny Williams is a fighter that still retained his punching power when fatigued, but he wasn’t able to throw as many punches.

He also stopped moving his head and feet and was sitting duck for those two giant heavyweights when they started to unload on him with punches. Williams unloaded on Tyson with a flurry of shots in the fourth round.

In Tyson’s sixth-round stoppage loss to Kevin McBride, he quit on his stool after the sixth. Tyson got the better of McBride in round six with huge power shots, but he was penalized two points for a headbutt. Additionally, Tyson was also warned for putting an armbar on McBride that hurt him.

Mike was resorting to roughhouse tactics to keep the 270+ pound McBride off of him, but none of it worked. In the last 15 seconds of the round, McBride pushed Tyson down on the canvas.

Jones lacks the size to wear Tyson down

Incredibly, Tyson was so tired that he wanted referee Joe Cortez to help him to his feet, but he wouldn’t do it. Tyson was forced to get up on his own, and he looked utterly gone as he climbed off the ground.

When the fight was stopped, it was more of a situation of Tyson being too tired to continue fighting than anything that McBride was doing. The Irish fighter was mostly leaning on Tyson, throwing short punches that didn’t have a lot on them.

He was using the same tactics of leaning that Tyson Fury used against Deontay Wilder in their rematch, and Tyson didn’t have the legs to or the weight to deal with the size advantage that the 6’6″ McBride had on him in that fight.

The 233 pound Tyson was outweighed by almost 40 pounds by McBride, and it proved to be too much.

Jones won’t have the weight advantage over Tyson on September 12. Indeed, it’ll be Tyson that will likely have a 20+ pound advantage in size over Jones, so we won’t see Roy pushing him into the ropes and leaning on him the way McBride did 15 years ago in 2005.

‘So there is a danger of this becoming a no-contest after four rounds, there really is,” said Froch on the potential of Tyson getting worn down by Jones.

It’s going to be a lot harder for Jones to be able to wear Tyson down as McBride and Williams did because he doesn’t have the size both of those fighters had in their favor. Danny Williams weighed 265 pounds and had an 18-pound weight advantage over Tyson.

Jones doesn’t have the same chin that Williams and McBride had going for them when they fought Tyson. Those were big guys that could absorb a lot of punishment by Tyson. Jones isn’t big, and he doesn’t have a great chin to take shots rounds from Tyson through four rounds.

Erislandy Lara vs. Greg Vendetti on August 29 on Fox »