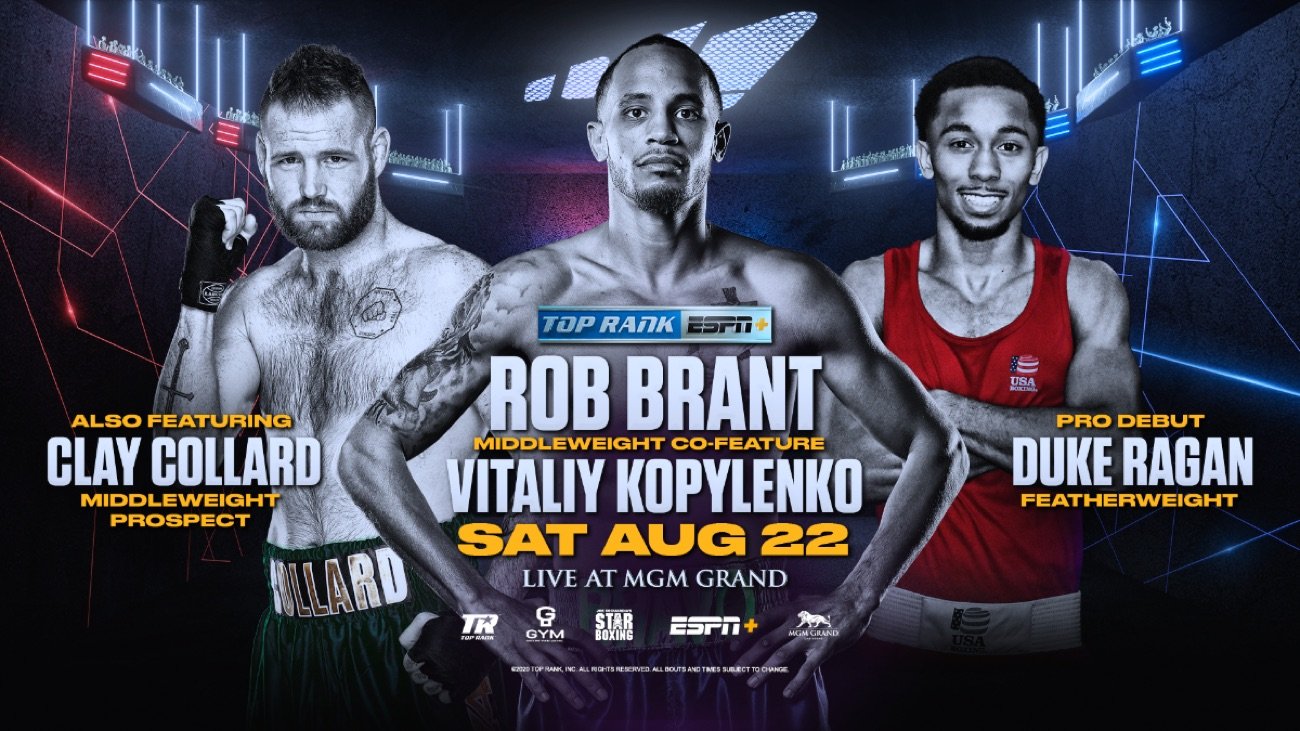 LAS VEGAS (August 12, 2020) — Former middleweight world champion Rob “Bravo” Brant’s comeback begins in a Las Vegas “Bubble.” Brant, who lost his belt to Ryota Murata last July and had a January return scrapped due to a torn biceps, will fight Vitaliy Kopylenko in a 10-round middleweight tilt Saturday, August 22 from the MGM Grand Conference Center.

Brant-Kopylenko will serve as the co-feature to the Eleider-Alvarez-Joe Smith Jr. light heavyweight world title eliminator live and exclusively on ESPN+ (10 p.m. ET).

The undercard stream (ESPN+, 7:30 p.m. ET) features the return of boxing’s newest cult hero, “Cassius” Clay Collard, the former UFC fighter who is the leading contender for 2020 Prospect of the Year.

“We have a can’t-miss main event and the highly anticipated returns of Rob Brant and Clay Collard. What a night at the fights inside the ‘Bubble,’” said Top Rank chairman Bob Arum. “Rob is rejuvenated and ready to begin his ascent towards another world title. As for Clay, whenever he fights, he delivers.”

Brant (25-2, 17 KOs) upset the odds in October 2018, defeating Murata by unanimous decision to win the WBA world title nearly one year removed from his loss to Jürgen Brähmer. He defended his world title once, then traveled to Murata’s home country of Japan intent on repeating the deed. Instead, Murata turned the tables, knocking out Brant in the second round of a slugfest that saw 354 punches thrown in 334 seconds of action. Following the Murata defeat, Brant hired a new trainer in Brian McIntyre, who is best known for his work with pound-for-pound king Terence “Bud” Crawford and WBO junior lightweight world champion Jamel “Semper Fi” Herring.

Kopylenko (28-2, 16 KOs), from Vasylkiv, Ukraine hopes to rebound from a May 2019 split decision loss to Steven Butler. Prior to the Butler loss, he’d won six consecutive bouts. A 12-year pro, Kopylenko advanced to the semifinals of the 2014 “Boxcino” middleweight tournament, which aired as part of the ESPN “Friday Night Fights” series.

“I have worked extremely hard, even though the current climate through the pandemic has been a bit hectic,” Brant said. “After physical therapy, I stayed focused on my nutrition, thanks to my wonderful wife, Tiffany, and began doing a lot of distance running until I was cleared to start punching again. I have been in camp for close to three months now and feel very strong and confident. Kopylenko is talented with a great body attack. I am very confident, but I respect his skill set and will prepare like this is a world title bout. I’m back!”

Collard (8-2-3, 3 KOs) will face Maurice Williams in a middleweight bout scheduled for eight or six rounds, his third “Bubble” appearance since June 18. Collard is 4-0 in 2020, including three victories over previously undefeated prospects. Williams (7-1, 3 KOs) has won five in a row since a fifth-round TKO loss to Dennis Knifechief in November 2016. He has since avenged his loss to Knifechief twice, including a third-round TKO victory.

“I just look at this as another fight. Nothing’s really changed other than the attention I’m getting,” Collard said. “I’m loving all of this. I’m just training and getting ready to do what I love.

“I didn’t know how I’d like fighting without fans and being quarantined, but I enjoy fighting for Top Rank in the ‘Bubble.’ I’m just blessed to be part of this experience.”

In other undercard action:

Star Boxing-promoted prospect Wendy Toussaint (11-0, 5 KOs) will take on “Bubble” veteran Isiah Jones (9-2, 3 KOs) in a middleweight fight scheduled for eight or six rounds. Jones, who went 1-1 inside the “Bubble” in June, is coming off a majority decision victory June 30 over the previously unbeaten Donte Stubbs.

Former U.S. amateur star Duke Ragan, from Cincinnati, will make his long-awaited professional debut against Luis Alvarado (1-1) in a four-rounder at featherweight.