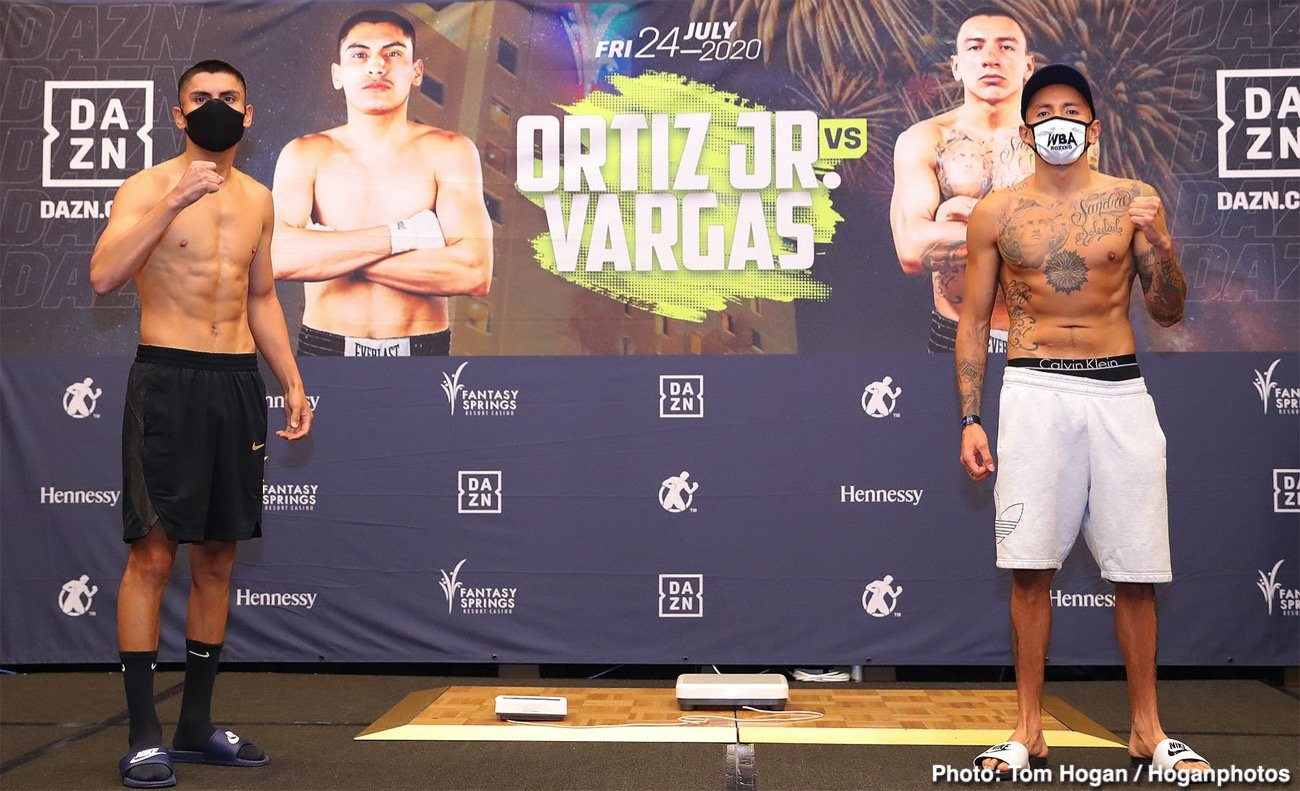 By Chris Williams: Vergil Ortiz Jr is fighting tonight in a showcase match-up against the capable Samuel Varga at 8:00 pm ET on DAZN from the Fantasy Springs in Indio, California.

Ortiz-Vargas is DAZN’s first show back since the pandemic started, and they’ve got an entertaining 10-round affair involving Golden Boy welterweight contender Ortiz Jr (15-0, 15 KOs) and 31-year-old journeyman Vargas (31-5-2, 14 KOs).

Vargas is usually good for six or seven rounds before he falls apart. Tonight, it might be a little tougher for the Colombian because Ortiz wants to make a statement by knocking him out faster than Errol Spence Jr did.

Spence stopped Vargas in the fourth round in 2015, while Danny Garcia knocked him out in seven rounds 2016. What makes it hard for Ortiz to get credit for doing a better job against Vargas is his age. He’s now 31, and he’s not the same fighter that Spence fought in 2015 and Danny in 2016.

Ortiz can’t outdo what Spence and Danny did because he’s not facing the same fighter that they did.

The four-year professional Ortiz Jr will be looking for his 16th straight knockout since he started his career, but he’s been matched carefully by Golden Boy.

Ortiz’s opposition has been fighters that Danny Garcia, Shawn Porter, Spence, and Terence Crawford all would have knocked out as well. 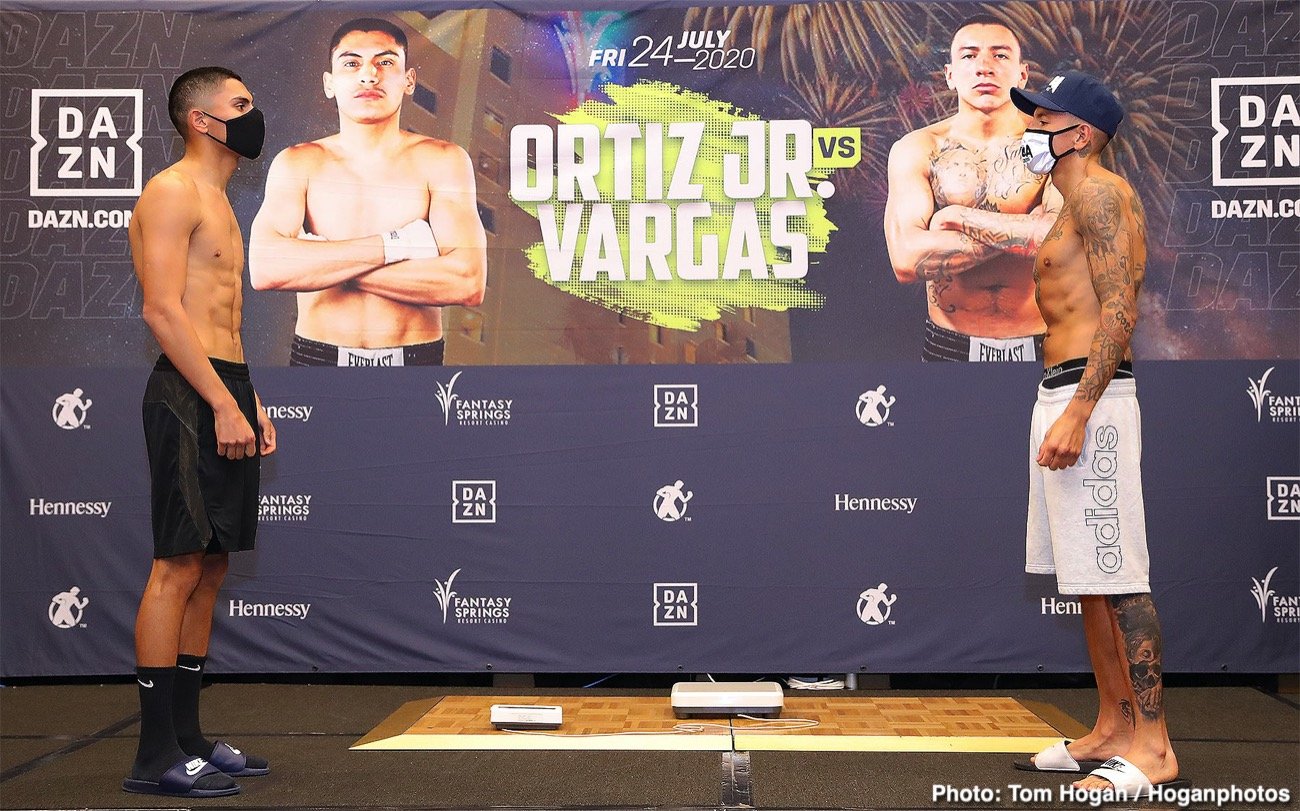 So when you look Ortiz’s record, you kind of have to take it with a grain of salt. When you’re continually fighting fodder, yes, you’re going to score a lot of knockouts, which is why Golden Boy needs to start putting Ortiz in with live bodies.

#2 WBO Vergil Jr wants a title shot against WBO welterweight champion Terence ‘Bud’ Crawford if he defeats Vargas tonight. That has only a slim chance of happening though, as Top Rank promoter Bob Arum is still matching Crawford carefully even though he’s a 12-year pro and 32.

Crawford SHOULD want to fight Ortiz, but his promoter Arum does the match-making for him. As such, don’t hold your breath waiting for Ortiz to get a crack at Crawford.

The only way this fight happens is if Ortiz becomes Crawford’s mandatory challenger with the World Boxing Organization, which won’t happen anytime soon. Some fans believe the WBO belts only belong to Top Rank fighters. If that theory is correct, Ortiz could be waiting a long, long time before he gets a chance to fight Crawford.

The Ortiz Jr vs. Vargas undercard took a big hit this week when Hector Tanajara Jr vs. Mercito Gesta fight was erased from the card. Instead, Shane Mosley Jr has been moved up to the co-feature spot in an eight-round battle against Jeremy Ramos.

Other fights on tonight’s DAZN card:

Ortiz Jr needs an early knockout to make a statement

“Vergil Ortiz Jr goes up against Samuel Vargas in Golden Boy’s return to boxing on Friday night,” said Chris Mannix to DAZN. “Ortiz is a heavy favorite as he looks for the 16th win of his young professional career. What do you want to see from Ortiz against Vargas?” 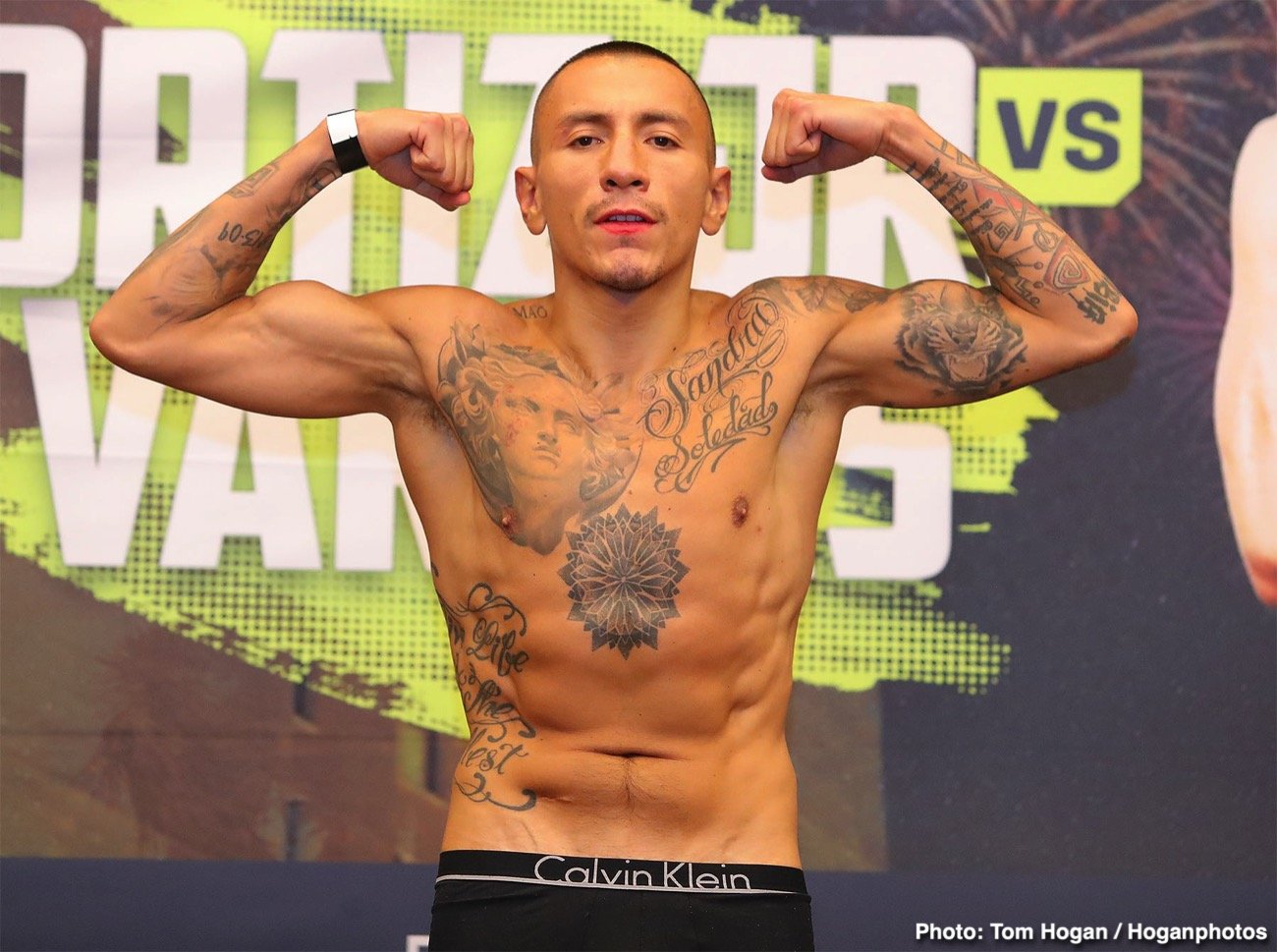 “I don’t want to see Vergil Ortiz screw around in this fight. I think he’s in an entirely different class than Samuel Vargas. Samuel Vargas has been in with some good fighters, as you mention, like Amir Khan, Luis Collazo, and on with that list, but every time he steps up the competition, and half the time, he gets knocked out.

“I don’t want to see Vergil Ortiz dance around him at all. I want to see him go to him and try to finish him early. Even though you’re fighting a guy that’s below, you can send a message if you beat him different or in a quicker way than some other top fighters have done.

Vargas has a good enough chin to last at least to the fourth round, but he might cave in earlier if Ortiz Jr goes all out for the knockout. Errol Spence Jr and Danny Garcia didn’t attempt to blast Vargas out right away, as they weren’t trying to prove a point.

Is Ortiz Jr at the same level as Shakur Stevenson?

“Ortiz needs to go out and have that attitude,” Mannix said. “Don’t be reckless, but go out there and look for a knockout. If it’s there, pick it up early. Ortiz has recently talked about wanting a world title shot.

“In a recent Instagram live, his trainer Robert Garcia said Ortiz will be ready for anybody in a year or two. I think Vergil Ortiz has as much talent and as much potential as any fighter in boxing.

“If you were making a list of the top prospects in boxing, and if you were having a fantasy draft of that list, I would probably take Ryan Garcia first. Garcia, in addition to his talent, has the charisma and has the following as far as social media to elevate him to a different level.

“But in terms of pure talent, you’re looking at Vergil Ortiz on the same level as a Shakur Stevenson and some of these other guys that are on top of this prospect division. Ortiz has a little bit of everything.

“And he also has an entirely underrated technique. If you watch Vergil Ortiz, I see a fighter that doesn’t fight with his hands low. I see a fighter with a high guard, who doesn’t get hit a heck of a lot.

I think I speak for a lot of boxing fans when I say that Shakur Stevenson is on another level than Ortiz.

Vergil Jr will need to wait to get the big fights

“He goes to the body as often as he goes to the head, and he has a skill set that belies his age and his career point right now,” said Chris. “So I think Vergil Ortiz, for pure talent perspective, has as much talent as anyone, and he can beat a multi-division champion. 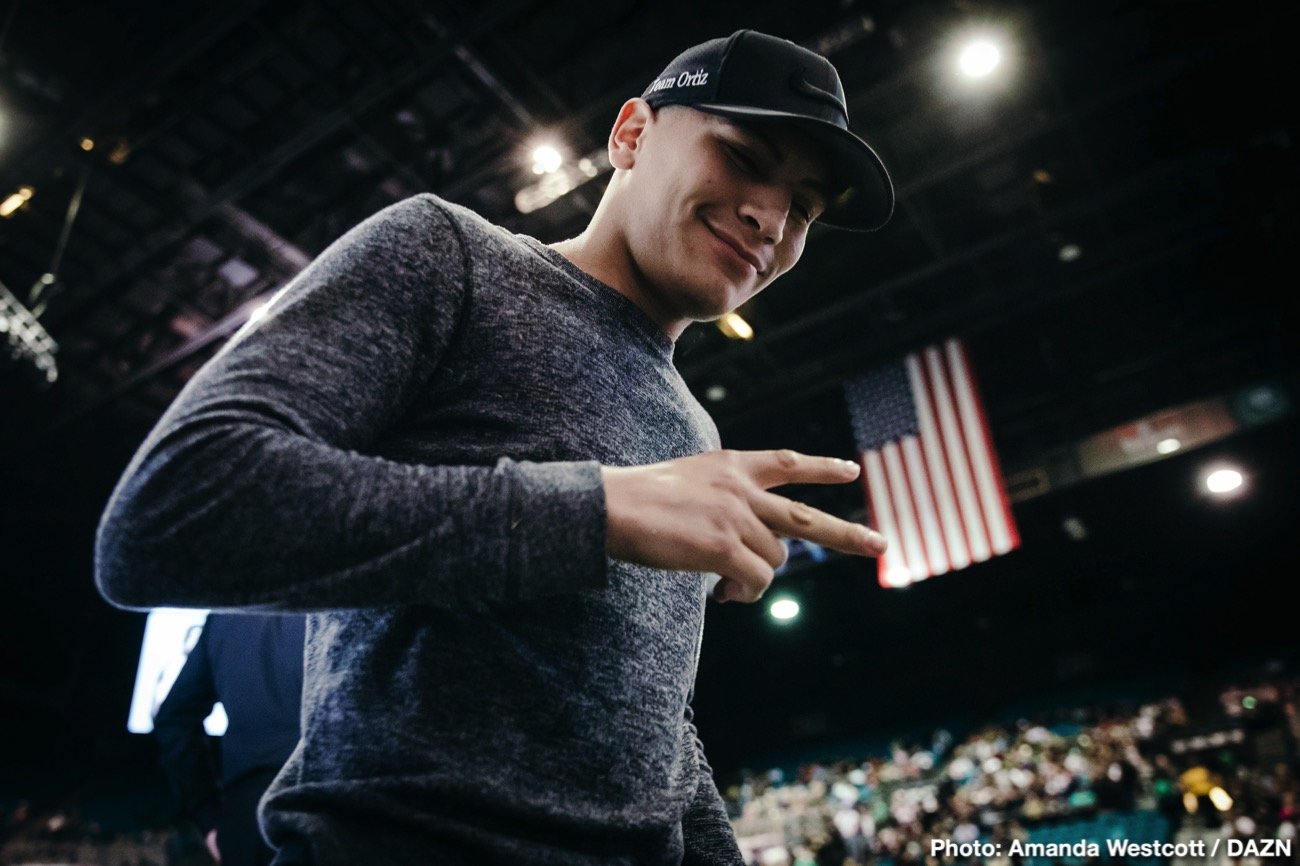 “He’s not going to get yet the Errol Spence’s of the world or the Garcia’s [Mikey and Danny] or any of the top guys, the Pacquiao’s. But there are so many fighters that Ortiz can have big fights with down the line.

“Whether it’s Devin Haney at some point at 147, and you’ve got Jose Ramirez eventually jumping up there. There will be some good fights for Vergil Ortiz, and once some of these guys clear out of the welterweight division in the next couple of years, there are going to be titles for him to win,” said Mannix.

When Jose Ramirez and Josh Taylor move up to 147, Top Rank will make sure they both face Crawford, and then after that, they’ll face their other stable fighters.

Spence has got other fish to fry right now with his career, and Ortiz isn’t on his list right now. Errol wants Danny Garcia, Manny Pacquiao, Terence Crawford, Shawn Porter, and Keith Thurman. Ortiz is way down on the bottom of Spence’s list, and it’s likely they won’t fight before Errol makes his move up to 154.

No promoter in their right mind is going to match their quality fighters against Ortiz Jr in 2020 in the beginning stages of the pandemic. They’re not going to put their fighters in with Ortiz until they can stage the fight in front of fans.

Ortiz needs an opponent that will hit him back

“The question I have about Vergil Ortiz and I don’t think we’re going to learn in a fight like this the answer to is how does he respond to getting hit,” said Mannix. “As [Mike] Tyson once said, ‘Everyone has got a plan until you get hit.’ Up until this point, Ortiz hasn’t been facing those types of punchers.

“I want to see Vergil Ortiz in with someone that can punch and can put him in a little danger. If he gets through that, then that’s where I’m going to learn a lot more about Vergil Ortiz.

“If Samuel Vargas has any chance of winning the fight, he’s going to have to put Vergil Ortiz in trouble, and I’m just not sure that he’s got the kind of power to do that.

“I want to see Ortiz continue his destructive ways,” said Sergio Mora. “He’s got a 100% knockout ratio. I want #16 on there. I want him to send a message to the 147-pound weight division. Send a message and be the third fight along with Errol Spence and Danny Garcia to stop Vargas.

“That’ll send a message to the fans that he’s willing to fight when fans are around. That’s a big message, and that in boxing, he belongs on the main stage, and his time has arrived. It’s the Vergil Ortiz show now.”

Golden Boy could have taken the training wheels off of Ortiz a long time ago, but they keep matching him against similar opposition. Oscar De La Hoya says Vargas is a step up for him, but the truth is, he’s at the same level as his last three opponents.

“Discipline and destruction, that’s what we want to see from Vergil Ortiz,” said Mora. “He’s scorching hot; he’s blue. Whatever is hotter. He’s seriously hot. I’m talking about the brightest star in the universe.

“That’s how hot he is. He’s scorching, but he has to take care of business by continuing his scorching ways, but the sky’s the limit; the universe is the limit. This kid is no joke and destined or greatness.

“Vergil Ortiz has the power, the temperament, the mind frame, and he has the TV behind him. So he has everything going for him. But the #1 thing I want to touch is Vergil Ortiz lives, breathes and lives boxing.

“Ryan Garcia mentioned that he only has five more years in the sport. He wants to be a model, an actor. He has other ambitions in his future. Vergil Ortiz has one in mind, and that’s destruction and destroy in the words of Marvin Hagler. 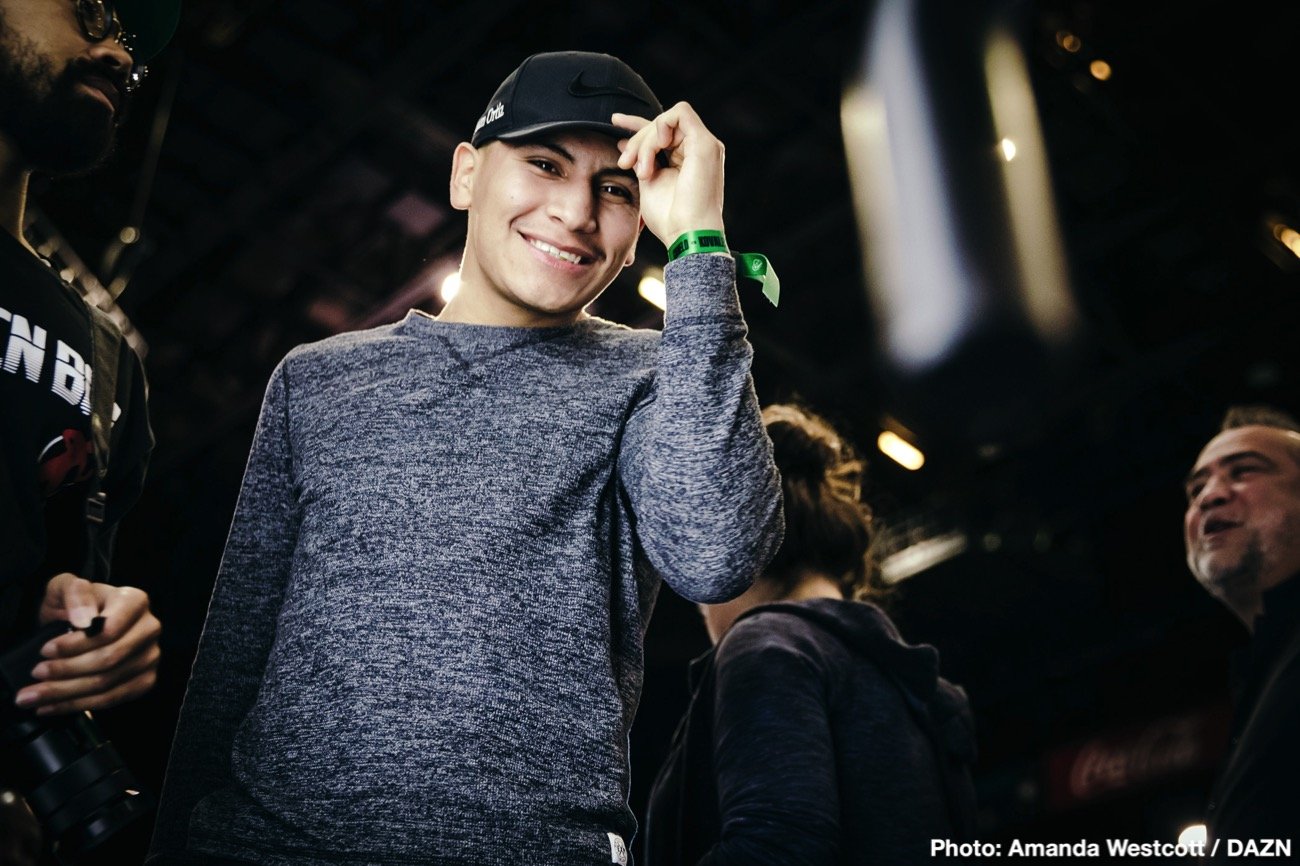 “I think it was the great Pernell Whitaker who said that he was asked if he had a great chin and can take  good shot and said, ‘I don’t want to find out.’ That’s exactly where we’re at right now.

“Vergil Ortiz doesn’t have Pernell Whitaker defense, and that’s the same question we can ask Ryan Garcia as well. We don’t know if he can take a good shot.

I’m not totally sure what Ortiz stands to gain in knocking Vargas out early. This is supposed to be a fight that helps Ortiz get the ring rust off, and he would be defeating that purpose of he blasts out the hapless Vargas.

Ortiz will knockout Vargas by the third round tonight if only because he’s going to go all out to try and impress. But I wouldn’t jump to any conclusions after Ortiz stops Vargas, and start thinking he can do the same to Spence or Crawford.