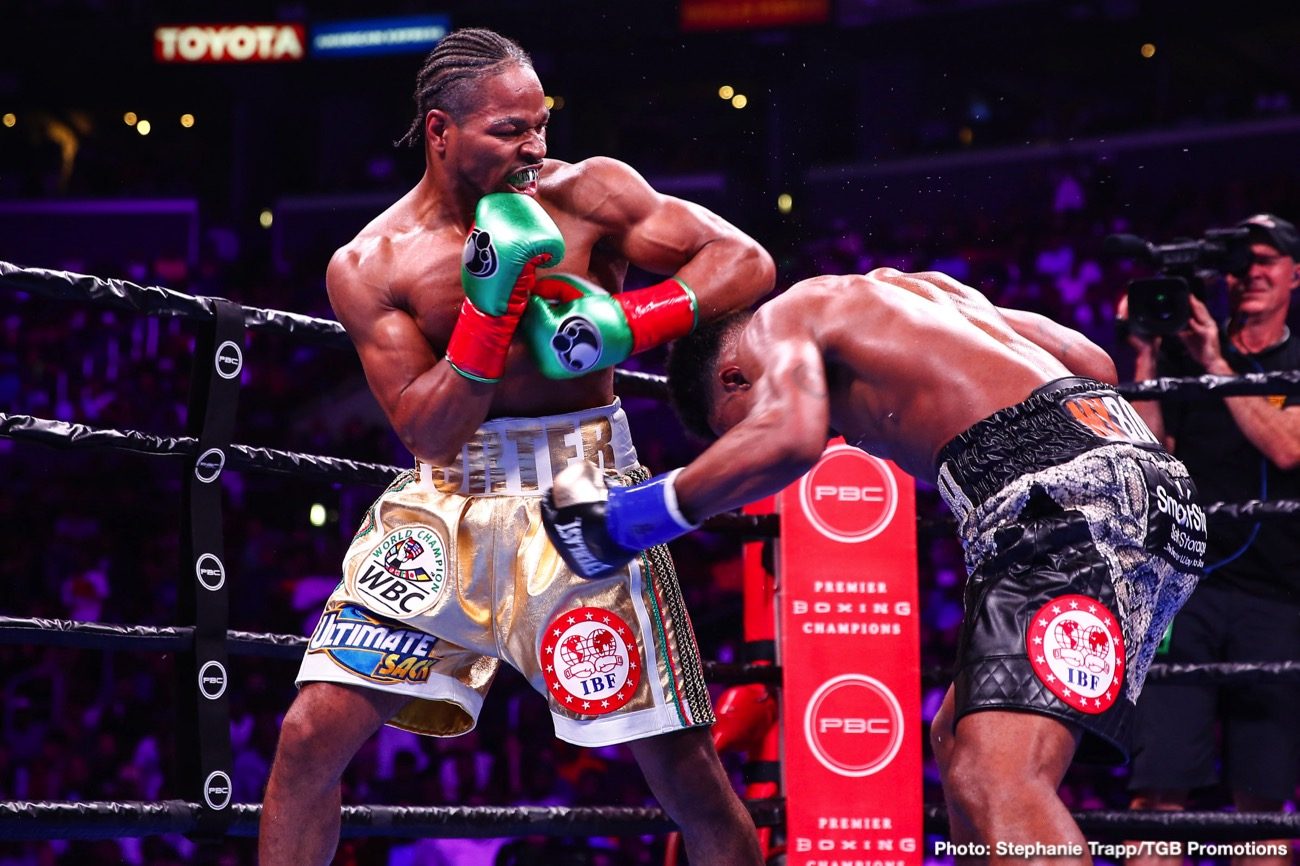 Fans are always wondering who would win between Spence and Crawford, and the fact is, no one knows. Porter is guessing that Crawford would win, but he’s never fought anyone talented during his long 12-year career.

And what we saw with Crawford getting hurt multiple times in his last fight by Egidijus Kavaliauskas, you have to conclude that Spence would beat him.

Porter admits that he’s friends with Crawford, but he states that he’s not biased because of that he does not hate on Spence due to his defeat.

Fighting his fight, Spence got in the trenches and defeated Porter by a 12 round split decision win last September in Los Angeles, California. Porter had his trunks pulled up high to limit the target area for Spence’s body shots, but it didn’t work.

Spence hammered Porter with punches to the body all night and wore him down. In the championship rounds, Spence took over and dropped Porter in the 11th round with a left hook to the head.

“I’m just different. Anyone that doesn’t recognize that or admit that is hating or just does not have the correct education, not just or boxing but for athletes in general,” said Shawn Porter to Fighthype. “Any boxer can see there’s something different about me.

“I had a conversation with him,” said Porter on Crawford. “The fight, to the best of my knowledge, is off the table right now. He’s got some things going. I don’t need to take a tune-up fight.

“It’s not going to be that right now. He said it. ‘Down the line, everybody has got to fight everybody.’ He looked at me and said, ‘I don’t care about fighting anybody. I don’t care who it is,’ and I laughed. But he said, ‘Right now, I don’t think it’s going to be you and me.’ I said, ‘Cool.’

“It’s not that he said, ‘I want to leave that.’ We have the understanding that he’s going that way right now, and I’m going this way. Everyone is going to have to be patient,” said Porter.

Top Rank wants Crawford to fight later this year, but it’s a difficult situation because he doesn’t want to take a cut in pay.

“That guy was very good,” said Porter when asked if Spence can beat Crawford. “In the last round, we touched gloves and normally we just fight, but I said, ‘Good s***,’ because it was that good.

“I wanted it, and I could tell he wanted it too. Does that fighter beat Terence Crawford? That fighter [Spence] was strong and was very good. I saw some holes, and I saw I was a step ahead of him the majority of that fight.

The way that Crawford’s head was getting snapped back repeatedly by Kavaliauskas and Jose Benavidez Jr, Spence might be a little too powerful for him. Crawford can dish it out well, but his ability to take shots is very questionable.

Top Rank should have tested Crawford by now against a quality fighter, but he’s slipped through 12 years without ever fighting anyone of note. The only thing we can say about Crawford is he’s capable of beating B-level opposition, but that’s about it.

Top Rank has done a great job with Crawford with their match-making. They’ve built him up to where a lot of boxing fans believe he’s the best even though he’s never fought anyone that you can call an A-level guy.

The problem with that level of match-making is it’s a double-edged sword. Yeah, Crawford is an unbeaten, and casual boxing fans go crazy over him, but it might be a mirage.

Porter claims he’s not biased for picking Crawford over Errol

“It can go both ways. You’ve got guys that are going to hate,” continued Porter. “I’m not going to hate. Putting my friendship with Terence to the side, and I’m going to stop saying that because we’re friends.

“I don’t need to say that anymore. Putting my biased opinion that people would think that I would have about Terence, given our history, I still think that’s a fight that Terence Crawford would win.

“It wasn’t me hating on Keith or the fact that me and Keith have a history or anything like that. I saw what I thought that I saw. For me, it really did show up in the ring, and it played ut the way it played out,” said Porter.

Boxing fans don’t think Porter is biased in favor of Crawford because of their friendship. They see it as Porter being bitter, in denial about his loss to Spence, and not willing to admit that he wasn’t good enough.

So when you factor that into the equation, it makes sense for Porter to be saying that Spence can’t beat Porter, because he’s still upset about losing.

If Crawford does fight in 2020, it’ll be against someone that doesn’t ask for a lot of money. That effectively rules out Kell Brook.