Devin Haney vs. Yuriorkis Gamboa in the works 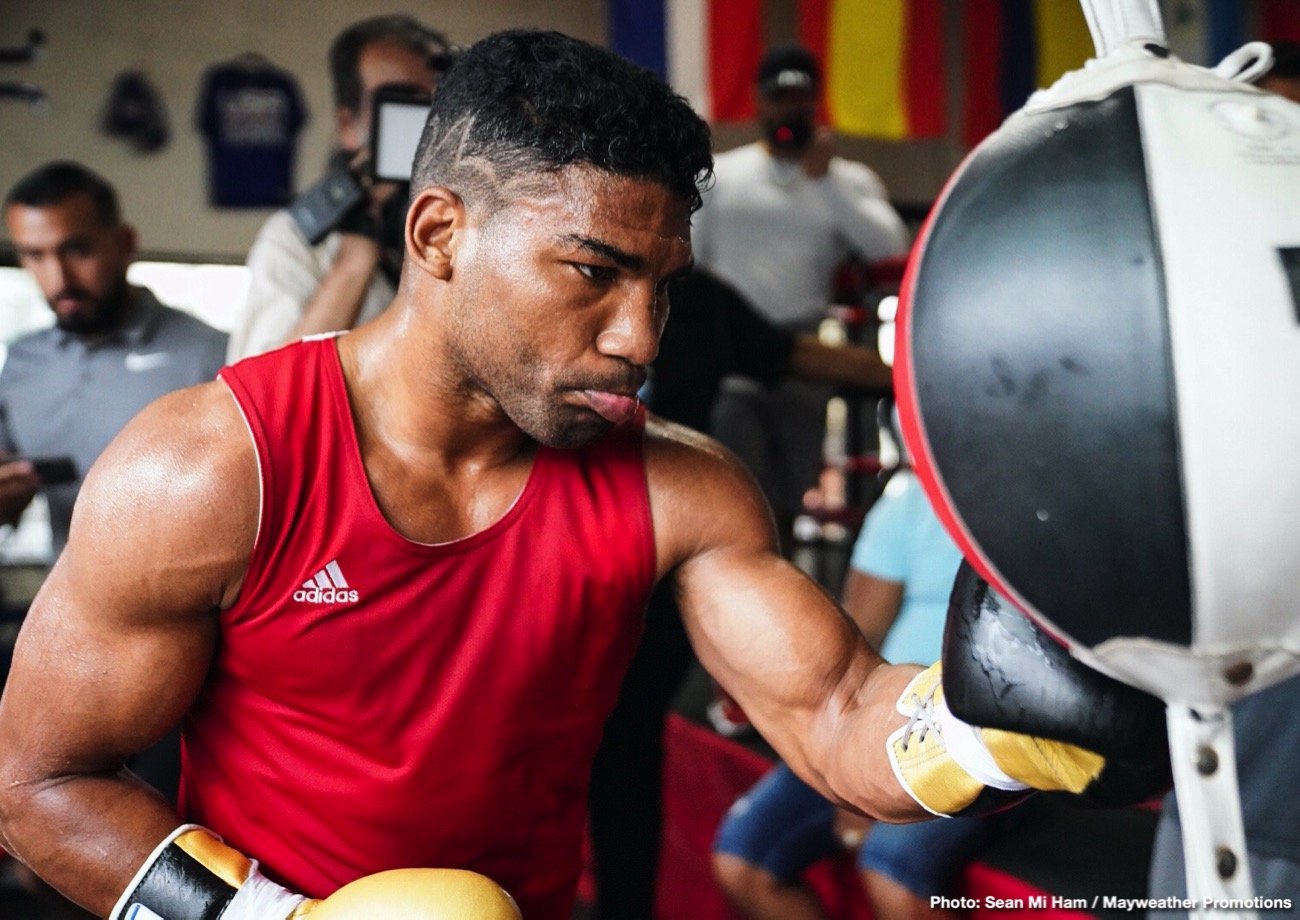 By Sean Jones: Devin Haney revealed on social media earlier today that he’s started negotiations to fight Yuriorkis Gamboa in his next fight. Not surprisingly, Haney’s announcement has been met with a mixed reaction from boxing fans. If Devin, 21, wanted to impress people, he’s picked the wrong guy for the job.

The 2004 Cuban Olympic gold medalist Gamboa was on another level a decade ago to where Haney is now. There are no comparisons. Gamboa was a far better fighter in his prime than what we’re seeing from the Mayweather-esque copycat Haney is now.

Not only was Gamboa a bigger puncher at 126 than Haney is at 135, but he was much faster in terms of hand speed. Gamboa was a fantastic fighter when he was at his best. 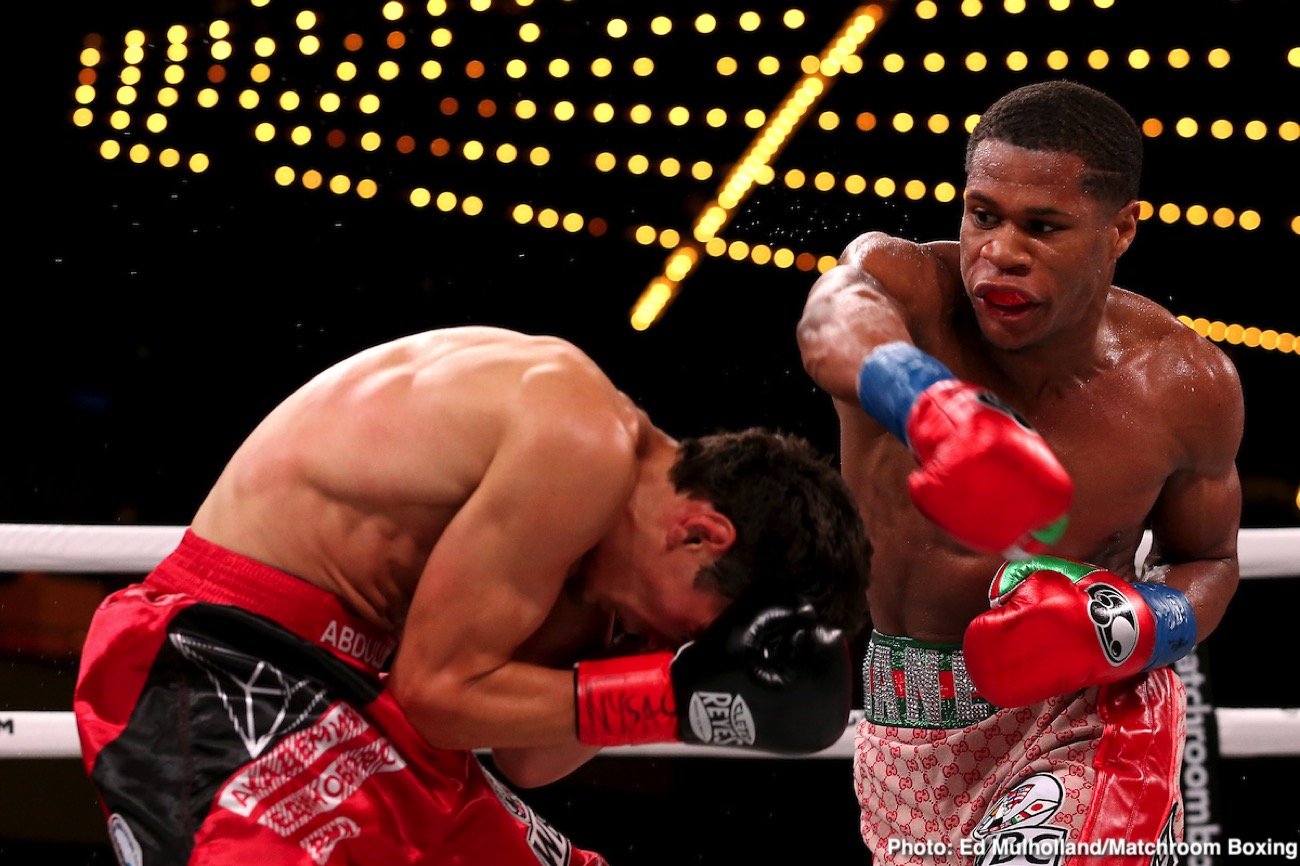 The 38-year-old former IBF/WBA featherweight champion Gamboa is coming off of a bad Achilles tendon injury in his 12th round knockout loss to Gervonta ‘Tank’ Davis last December in Atlanta, Georgia. Yuriorkis showed a lot of courage in fighting with a torn Achilles from round two until the 12th. A lot of fighters would have given up immediately if they were in a similar circumstance as Gamboa.

Gamboa did an excellent job of reinventing his career after loss to Robinson Castellanos in 2017. After that defeat, many boxing fans felt that Gamboa was finished as a fighter. But to his credit, he came back from that loss to win four straight fights before his recent defeat to Tank Davis.

So it’s possible that Gamboa can reinvent himself, but that might not happen right away if he takes on Haney in his first fight back from his Achilles injury.

It’s unclear whether Gamboa’s Achilles has been fully rehabbed. For a professional athlete to come back from that type of injury, it can take as long as eight months before they can perform.

Even then, it’s hit or miss in terms of whether their surgically repaired Achilles allows them to perform as they did before. Gamboa had surgery last January, which means he’s only had seven months to rehab.

In beginning negotiations for a fight with Gamboa! What do you guys think? 👀😤 pic.twitter.com/TrwDgwn4Id

Has Yuriorkis’ injury been rehabbed correctly?

Only Gamboa knows if that’s enough time. With the money that Matchroom Boxing promoter Eddie Hearn will offer Gamboa, he probably won’t turn it down even if his Achilles is still acting up.

It’s hard to say what Haney expects to prove by fighting Gamboa now with him older and coming off the injury and a KO loss to Grevonta. Haney and his promoter Eddie Hearn likely view the fight as meaningful for the reason that it can give boxing fans a chance to compare him with Tank Davis.

Also, Gamboa is a recognizable name with the casual boxing fans, so many of them will take far more interest in that fight compared to the guys he’s been facing his entire career.

See for yourself. These are Haney’s last six fights:

Hardcore fans know who these guys are, but the casuals and these aren’t great fighters. So by picking out Gamboa, Haney will be taking on a guy that people know about and remember when he was a terror in his younger days in the 126-lb division.

Gamboa gave Terence Crawford easily the toughest fight of his career in 2014 before losing by a ninth-round knockout. Crawford was hurt at one point in the battle, and he was losing through the first five rounds. Gamboa was the much smaller guy, but he had better power and hand speed than Crawford.

The reach and the counter-punching ability of Crawford is what ultimately led him to victory over Gamboa. What was impressive through is Gamboa was fighting two divisions above his best weight class at 126 in taking on the younger and taller Crawford.

Gamboa was one of the best

If you’d asked Crawford to move up two divisions to 160, would he do well against Gennady Golovkin or Jermall Charlo? Probably not. Crawford would likely have his moments until GGG and Charlo started putting hands on him.

At that point, things would go downhill fast for the Nebraska native Crawford, and he’d up the same way Kell Brook did against Golovkin by getting stopped.

Gamboa (30-3, 18 KOs) would have been a good opponent for Haney if the two go could back into a time machine back 10 to 12 years, when Yuriorkis was younger, winning world titles at 126, and being compared to Mike Tyson.

The compact power and hand speed that Gamboa had in the first four years of his career from 2008 to 2012 was impressive.

The 5’5″ Gamboa was at his best at 126 when he was beating the like of Orlando Salido, Jonathan Victor Barros, Daniel Ponce De Leon, and Jorge Solis. When Gamboa left the featherweight division to move up to lightweight, that’s when he started to have problems due to his lack of size.

WBC lightweight champion Haney isn’t saying how far advanced his management is in with the negotiations for the Gamboa fight, but he sounds serious about wanting this match.

In picking out Gamboa, Haney is taking the risk of potentially being exposed as a product of hype. Losing to Lomachenko wouldn’t be a massive blow to Haney’s career as he would have an excuse for a loss of that nature. But you can’t say the same thing if Haney gets beaten by Gamboa. That would be a devastating defeat for Haney to try and come back from, and I’m not sure that he could.

Haney was made WBC lightweight champion via email last October. In his first defense, Haney beat Alfredo Santiago by a tougher than expected 12 round decision last November.

Santiago gave Haney all kinds of problems with his size and boxing ability. Although Haney ultimately won the fight, he suffered a shoulder injury that required surgery.

In hindsight, the WBC’s move to make Lomachenko the Franchise champion might have saved Haney from an embarrassing loss. Devin wasn’t going to beat Lomachenko, and it could have hurt his career had he been given a shot against him.