By Sean Jones: Jermall Charlo vs. Sergiy Derevyanchenko is now reportedly a done deal for September on Premier Boxing Champions on pay-per-view. We can reasonably assume the fight will bring in a trickle of buys from consumers, who still have the money to purchase pay-per-view events.

But it’s asking for trouble for Charlo and Derevyanchenko to be fighting on pay-per-view.  This fight might be lucky if it brings in 50,000 buys. Whether that amount is enough to pay for the expected large purses for Jermall and Sergiy is another thing.

@MikeCoppinger is reporting the Charlo-Derevyanchenko fight done, according to o his sources.

Is Derevyanchenko ready for another war?

We don’t know what we’re going to get from the 34-year-old Derevyanchenko in this match-up against Jermall, considering that he’s coming off of a brutal 12 round war against Gennady Golovkin. 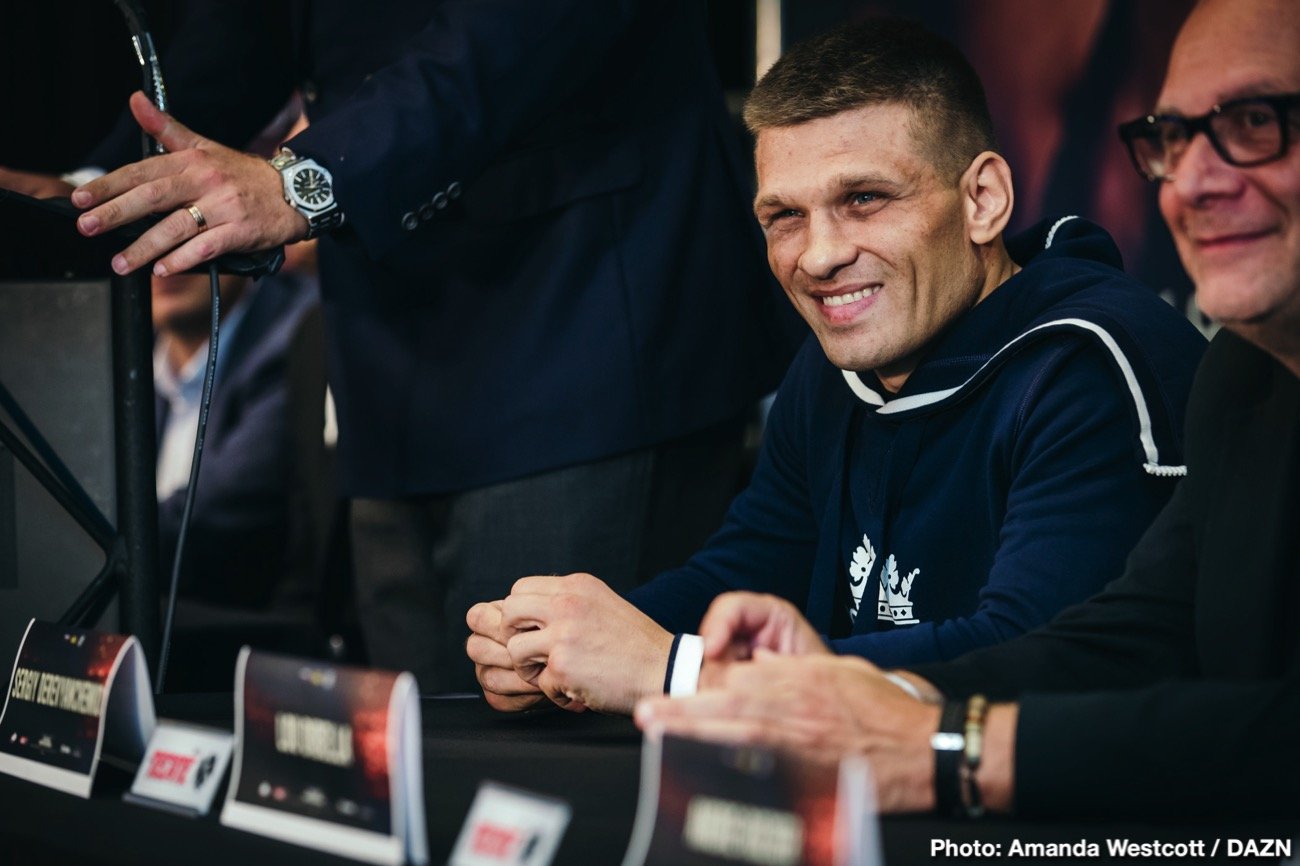 That fight could have taken something out of Derevyanchenko, and he might be up to the tasks of fighting another war right away. Going from the GGG match to what could be an equally fierce battle against Jermall, it might be asking a little too much from Derevyanchenko.

Charlo (30-0, 22 KOs) will be defending his WBC middleweight title against the former two-time world title challenger Derevyanchenko (13-2,10 KOs). It’s a tough fight for the 30-year-old Charlo, who arguably should have lost to Matt Korobov in their match in December 2018.

The most pressing issue with Derevyanchenko and Jermall fighting on PPV is the timing.  It’s an excellent match-up, but whether it’s worthy of being shown on pay-per-view is highly debatable.

NEWS:   Sergiy Derevyanchenko - should he move down to 154 to go after titles?

What this does is it means that boxing fans WON’T purchase it, and will turn to watch streams or waiting until the match is put up on Youtube within minutes after the fight. If you’re a fan and you have a choice between using little money you have to pay bills or purchase the Charlo-Derevyanchenko bout on PPV for $70, it’s reasonable to assume they’ll pay their bills.

PBC obviously wouldn’t put the Derevyanchenko vs. Charlo fight on pay-per-view if they didn’t need to. The big money that Charlo and Derevyanchenko are getting for the contest has probably forced the need to place it on PPV on either Fox or Showtime.

Korobov and Julian ‘J-Rock’ Williams stand out as the top two fighters on Charlo’s 12-year pro resume. The next best guy that Charlo has fought is Austin Trout, an opponent that gave him all he could handle in 2016 in losing a narrow 12 round unanimous decision.

Charlo doesn’t have a lot of experience fighting quality opposition, and there’s a good chance he comes unraveled against the battle-tested Derevyancehnko. The Ukrainian fighter is coming off of a controversial 12 round defeat against Gennady ‘GGG’ Golovkin last October in New York. It’s safe to say that the entire world saw Derevyanchenko as the winner.

In addition to the GGG bout, Derevyanchenko has also fought Daniel Jacobs. He lost to him too by a 12 round decision in 2018. Like the Golovkin match, Derevyanchenko’s defeat against the A-side fighter Jacobs was controversial as well.

Charlo has faced lesser opposition throughout his career

It wasn’t as questionable as the GGG-Derevyanchenko bout, but it was nonetheless highly contentious. Derevyanchenko appeared to beat Jacobs by a narrow margin, but the judges gave it to the better-known guy. Welcome to boxing in the 21st century.

Charlo has power, but he struggles just like his twin brother Jermell when his opponents don’t cringe and retreat. PBC’s match-making that they’ve been doing for Charlo has been embarrassingly bad with them spoon-feeding him soft opposition repeatedly. As a consequence, Charlo’s popularity hadn’t gone through the roof the way that Golovkin did when he emerged as a famous fighter in 2015.

Judge for yourself. These are Charlo’s last five opponents:

Fighting mediocre opposition like that wouldn’t be a bad thing if it were done in one year only, but these fights have CHEWED up three years of Charlo’s career. That’s significant.

When a fighter invests three years of their careers fighting lesser opposition repeatedly, it sends a message. It means that they’re milking their titles or they’re satisfied with padding their records. In Charlo’s case, I think it’s a combination of the two. He’s been milking his titles and padding his resume at the same time.

Derevyanchenko has a great chance of winning

J-Rock is a good – but flawed – fighter, so you can give Charlo some credit for beating him, but it’s still not a big deal beating him.

In 2017, Charlo defeated Jorge Sebastian Heiland by a 4th round knockout in a WBC 160lb title eliminator. Heiland had a knee injury, and he was limping from the very start of the fight.

The WBC might as well have given Charlo the mandatory status without him facing the injured Heiland because it amounted to the same. It wasn’t even a fight. Heiland came out limping, and Charlo stopped him quickly.

If Derevyanchenk is the same fighter he was in his last bout against Golovkin, he’ll beat Charlo without question. But whether Derevyanchenko is given the decision, that’s another matter. Charlo is relatively well known, and he is the WBC champion.

You can argue that counts for at least four rounds in the bank from the start. Derevyanchenko needs to come into this fight with the mindset that he’ll need a knockout to win.

If not that, then Derevyanchenko will have to dominate Charlo so thoroughly to where the judges can’t mess things up as they did in his contests against Golovkin and Jacobs.