Jamal James vs. Thomas Dulorme fight on Aug.8 on FOX 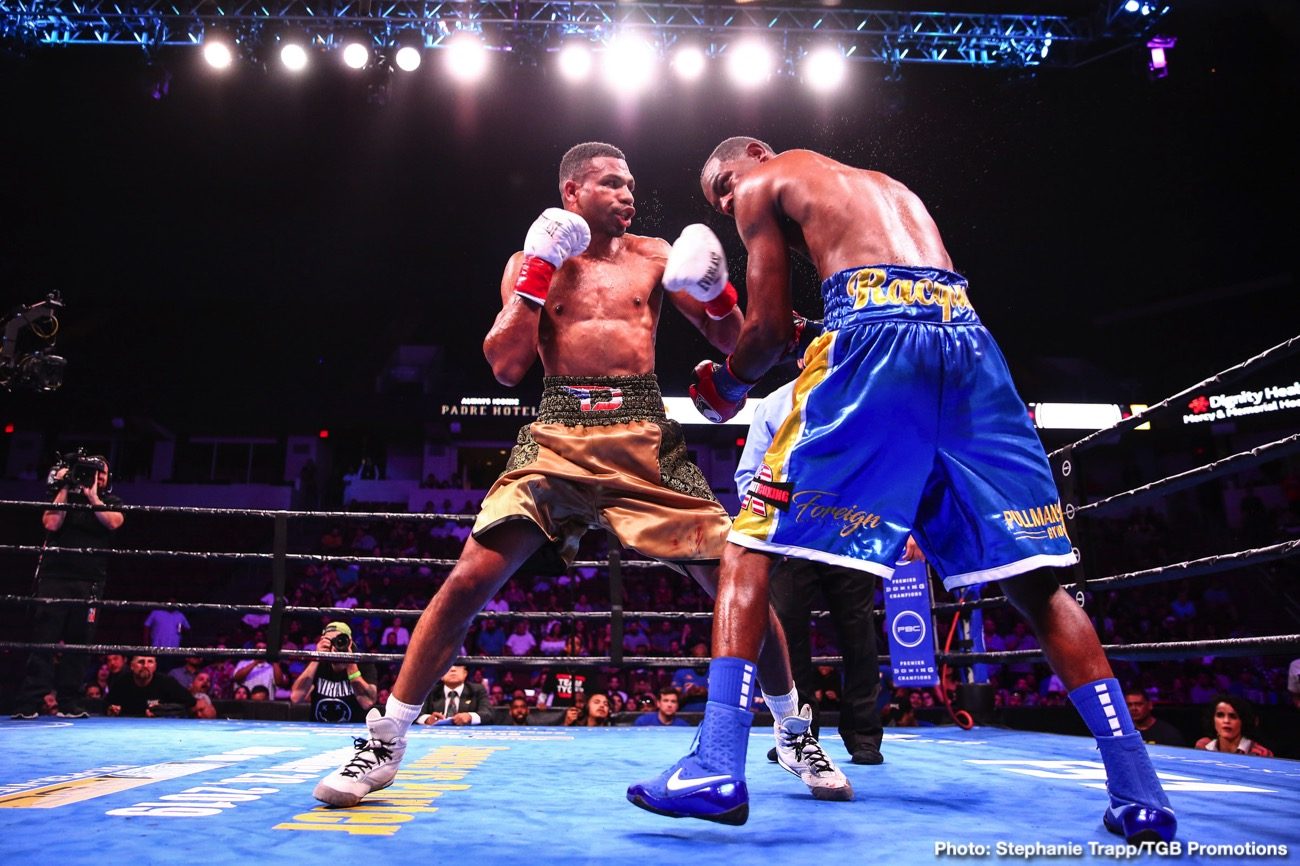 Top welterweight Jamal “Shango” James will square off against former title challenger Thomas Dulorme in a 12-round battle for the Interim WBA Welterweight Title. They’ll be headlining the return of FOX PBC Fight Night on FOX, FS1, and FOX Deportes, Saturday, August 8, from the Microsoft Theater in Los Angeles.

Exciting, undefeated super lightweight prospect Omar Juárez will battle Willie Shaw in a unique attraction on the broadcast. All programming can be live-streamed in English and Spanish on the new FOX Sports app. FOX Deportes offers delayed coverage of all FOX and FS1 programming beginning at 10:00 p.m. E.T.

Plus! Key FOX PBC Fight Night and FS1, FOX Deportes, and PPV event dates for the remainder of the year will be unveiled live during the primetime broadcast, which will feature interviews with some of the PBC stars who will appear on those shows.

“FOX Sports is thrilled to welcome PBC back into the ring August 8 with a fantastic matchup,” said Bill Wanger, Executive Vice President, Head of Programming and Scheduling, FOX Sports. “This outing is the first in a long line of great fight nights coming for the remainder of the year on FOX, FS1, FOX Deportes, and PPV.” 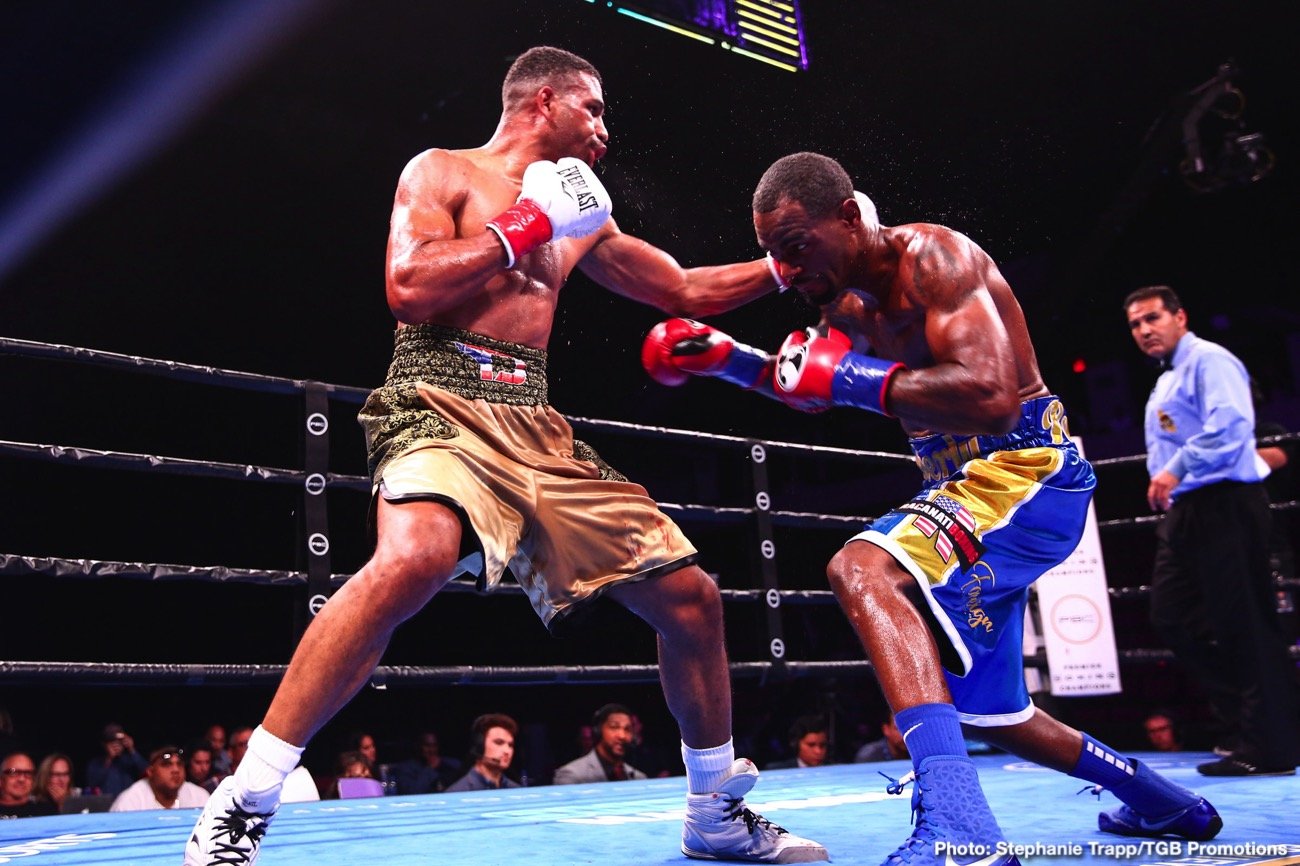 NEWS:   "I wasn't getting in the ring for less than $25 million!" - Evander Holyfield

The James vs. Dulorme event will be promoted by TGB Promotions and will take place without fans in attendance at the Microsoft Theater, an AEG venue, which will be the home of some of the earlier upcoming FOX PBC Fight Night events.

“We’re thrilled to have PBC back on FOX, FS1, and FOX Deportes headlined by this great main event between Jamal James and Thomas Dulorme,” said Tom Brown, President of TGB Promotions. “James has proven that he is amongst the top welterweights in the world, and he will again have a chance to show his credentials against a tough opponent in Dulorme. Combined with a stacked undercard of fights featuring rising stars and more, this lineup should deliver great action for fans all night long on August 8.”

“Boxing has a rich history in downtown Los Angeles, and we are incredibly excited to host FOX PBC Fight Night on Saturday, August 8,” Lee Zeidman, President, STAPLES Center, Microsoft Theater and L.A. LIVE. “This will mark our first televised fanless event since the COVID-19 Pandemic forced us to close our venues in March. We look forward to providing FOX, the fighters, their camps, and the California State Athletic Commission with a safe environment to host their Fight Night at Microsoft Theater.”

James (26-1, 12 K.O.s) had built a passionate fan base in his hometown of Minneapolis and was scheduled to thrill his local fans again on April 11 before the COVID-19 Pandemic forced it to be rescheduled. His last fight was an exciting decision victory over former champion Antonio DeMarco in an FS1 main event last July.

The 32-year-old James has reeled off six consecutive victories since suffering his only defeat in a unanimous decision loss to Yordenis Ugas in 2016. James has compiled three knockouts during his current win streak, defeating the likes of Diego Chaves, Abel Ramos, and Jo Jo Dan. 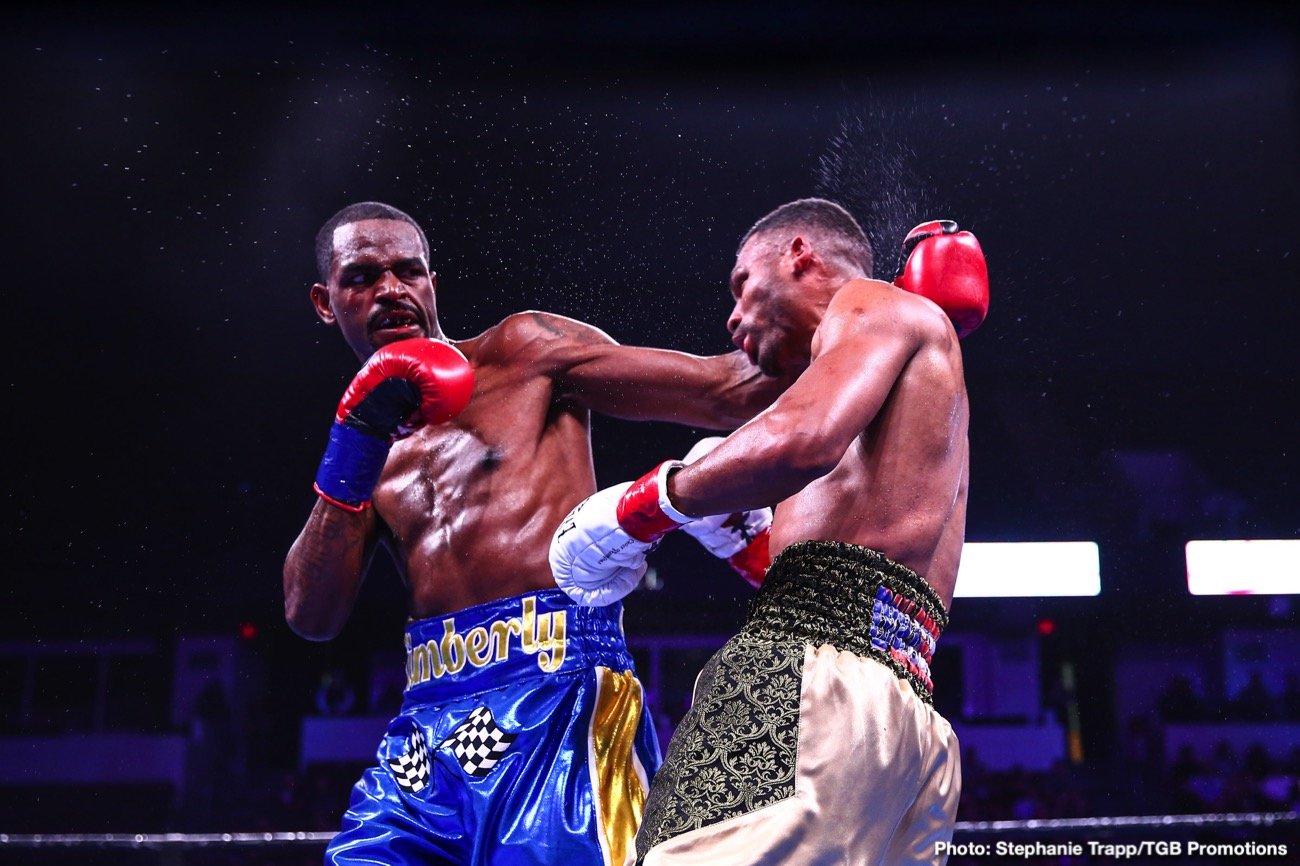 “I’m excited and ready to be getting back in the ring after everything happening these last months,” said James. “Thomas Dulorme is a strong opponent, and I feel that we will be giving boxing fans a great night of action. Training has gone extremely well, and I am more than prepared to secure this victory.”

The 30-year-old Dulorme (25-3-1, 16 K.O.s) most recently defeated then unbeaten Terrel Williams in September, winning a unanimous decision after his previous contest had seen him fight to a majority draw against two-division champion Jessie Vargas in 2018. Born in Marigot, Guadeloupe, but fighting out of and representing Carolina, Puerto Rico, Dulorme rebounded from a loss to Terence Crawford for a 140-pound title by scoring back-to-back knockouts, leading to a narrow decision loss to top welterweight Yordenis Ugas in 2017 on FOX PBC Fight Night.

“I have been in training camp now for over four months for this fight, and I can’t wait to get in the ring and put on a spectacular performance,” said Dulorme. “The delay only makes me more motivated. James is a good fighter, but I am on a different level, and it will show on August 8. I will put on the best performance of my career and win the WBA title.”

Morrell (2-0, 2 K.O.s) arrived in the U.S. last year and immediately began to show the same prodigious talents that made him a standout in Cuba’s iconic amateur scene. Now fighting out of Minneapolis, Morrell made his pro debut there last August, stopping Yendris Rodríguez in the first round. 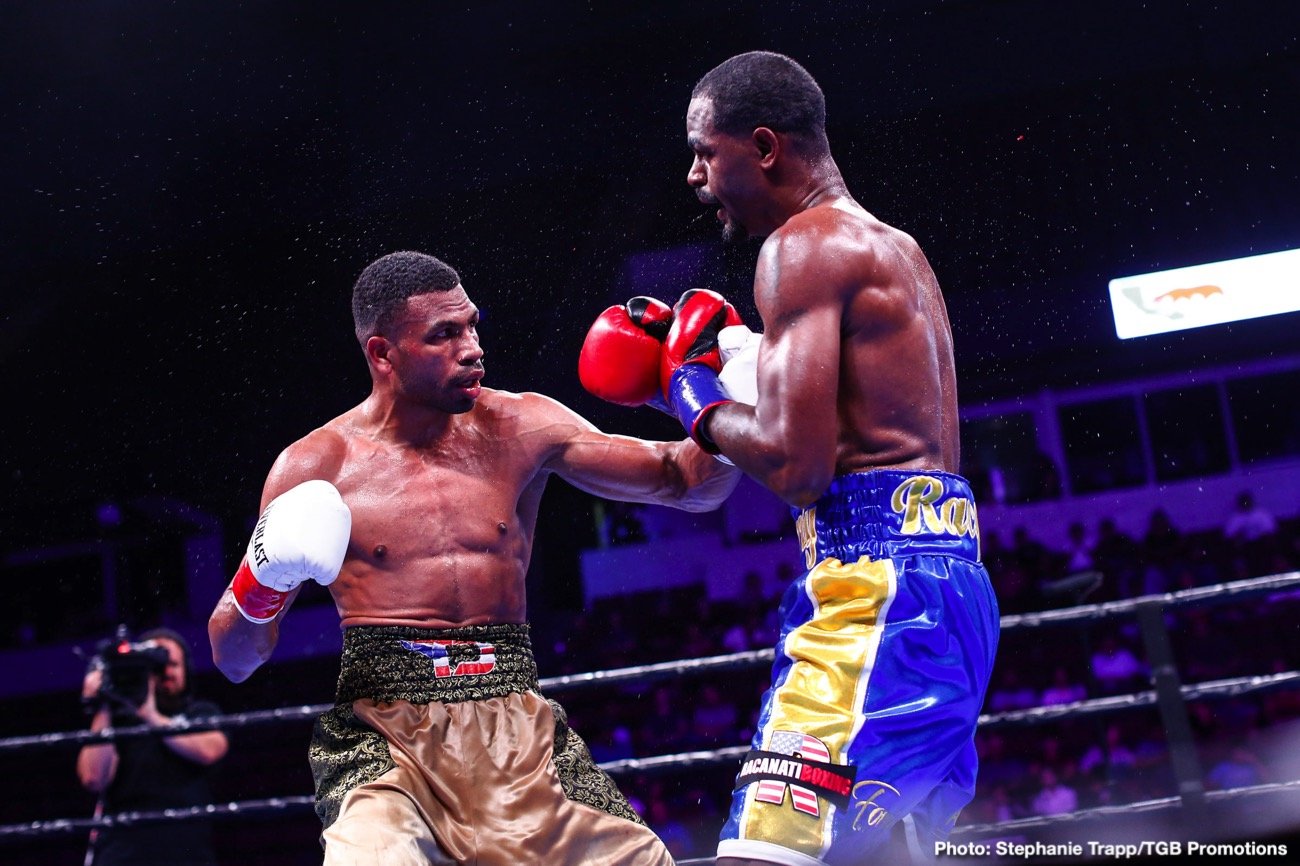 The 22-year-old followed that up in November, knocking out Quinton Rankin, who entered the fight with a 15-6-2 record and had most recently gone the distance with former champion Chad Dawson five months before facing Morrell. This will be a significant step up for Morrell in just the third fight of his pro career.

“I’m focused and ready to get in the ring to win this title on August 8,” said Morrell. “Training is going well, and I’ve been working hard with my team day after day. I know that I have to prepare for everything and that I can’t underestimate Allen. I want that belt, but I know he does too. I respect him as a person, but when I step into the ring, I don’t have friends, family, or anything. It’s just two fighters going after the same prize, and I’m prepared to do what I have to do.”

“It’s been a while that we’ve been waiting for this fight, but training camp has been going great, and we’re on schedule for fight night,” said Allen. “I’m ready to go in there, showcase my skills, and let everyone see that I’m a well-rounded fighter. I think this fight is going to go into the later rounds, and then my experience is going to kick in, and I’ll leave the ring with my hand raised.”

Juárez (7-0, 4 K.O.s) carries the nickname “Relámpago”, or “Lightning” in English, and it could apply to how quickly he strikes in the ring and to how rapidly he plans to overtake the super lightweight division. The 21-year-old from Brownsville, Texas, had an outstanding amateur career with over 120 fights, establishing himself as a “can’t miss” pro. He had a busy 2019, chalking up five straight wins, and is coming off a unanimous decision victory over Angel Martinez Hernandez in February.

“The motivation to take my career to the next level has only intensified since the shutdown, and I can’t wait to get back in the ring,” said Juarez. “Fighting on FOX for the first time is a dream come true. A win against a fighter like Willie Shaw. He has been in the ring with some quality fighters, is going to elevate my status in the super lightweight division. I’ve had a great training camp, and I’m ready to let my hands fly with bad intentions.”

Shaw (12-1, 8 K.O.s) most recently scored a knockout victory over Antonio Flores in February. The 28-year-old has always been an exceptional athlete and even received a basketball scholarship to Stanford University. He took up boxing late, turning pro in 2017 with nine straight wins. Shaw has put together three consecutive wins since suffering his only loss, a majority decision to Jose Marrufo in March 2019.

“Training camp for this fight has been perfect, and I’m anxious and ready to take advantage of this chance and opportunity,” said Shaw. “Once I beat Juarez, I can show that I have class. People are going to have to respect me. He’s going to bring a lot of attention to me. I think it’s going to be a good chess match. He’s got the amateur experience, and I have the pro experience. I’ve been waiting for my moment. He’s just someone in the way.” 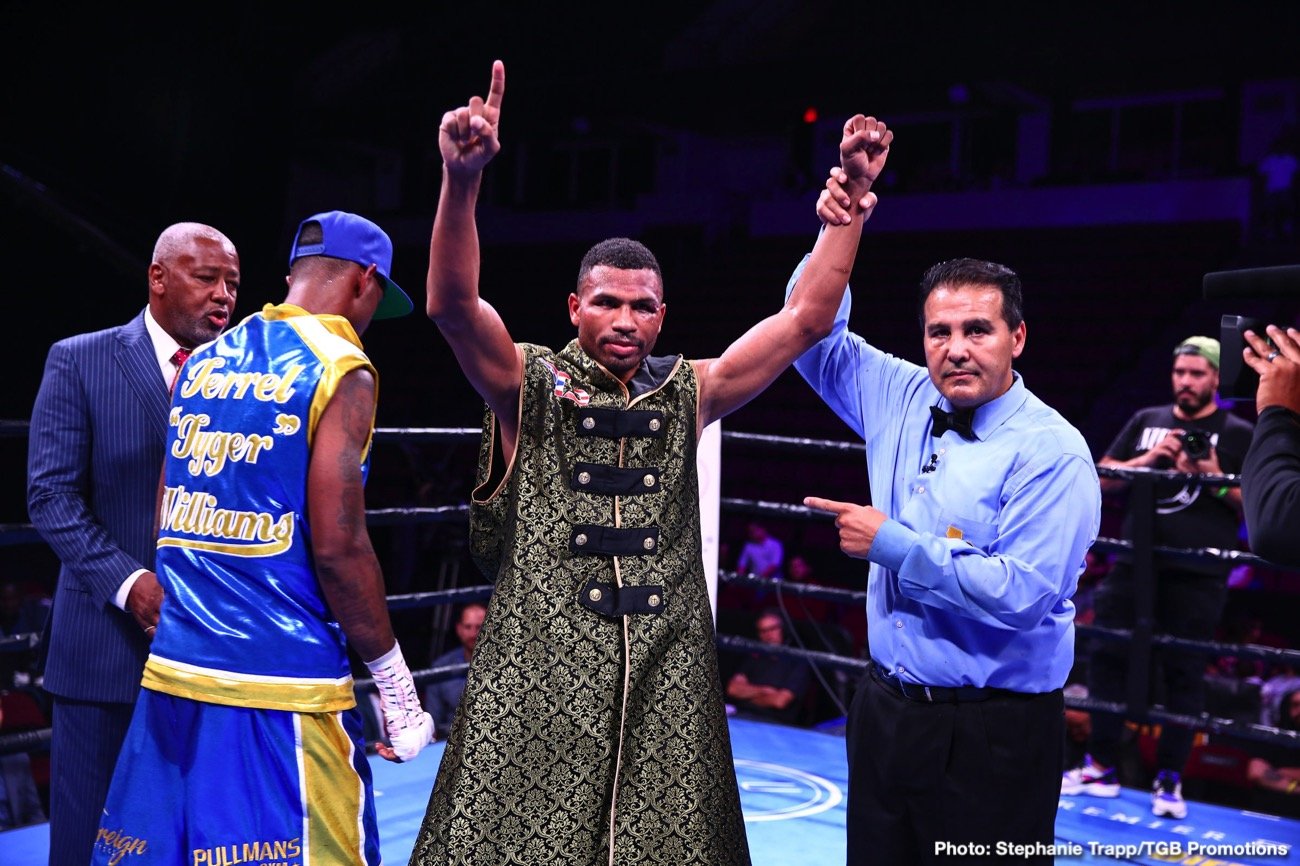