By Mark Eisner: Deontay Wilder will be taking his contractually bound trilogy fight with WBC heavyweight champion Tyson Fury (30-0-1, 21 KOs) later this year in 2021, according to his co-manager Shelly Finkel.

Wilder (42-1-1, 41 KOs) wants to regain his championship form by beating the 6’9″ Tyson this December to snatch back his coveted WBC strap. The 2008 U.S Olympian Deontay will be getting a 60/40 split with him taking the smaller 40% cut of the purse for his third fight against Fury.

Wilder needs to make it count this time, seeing that it could be the last time he faces Fury. A second defeat at the hands of

The principal reason this is up for discussion is that Matchroom promoter Eddie Hearn has continually floated the idea of Fury’s WBC mandatory Dillian Whyte moving ahead of Wilder to take the fight with Fury this year.

Additionally, Wilder’s disengagement from the media since his loss to ‘The Gypsy King’ last February has many boxing fans believing that he won’t take the fight. They feel that Wilder is mentally devastated by his seventh-round knockout loss to Fury, and he’s still trying to make sense of what happened to him.

Hearn is looking out for himself and the company by pushing for Fury to face Whyte (27-1, 18 KOs) next ahead of Wilder. Hearn maintains that Whyte has been the mandatory challenger with the World Boxing Council for 1,000+ days.

The truth is far different, however, as Whyte earned the WBC mandatory spot last July when he beat Oscar Rivas in a WBC title eliminator. Before that, Whyte had been ranked #1 with the WBC since 2017, but he decided against fighting Luis Ortiz in a title eliminator in 2018.

Whyte is an excellent fighter, but he’s been his own worst enemy when it comes to making the right moves to get a title shot.

“Deontay will fight Fury this year,” Finkel said to skysports.com.

There it is straight from Finkel’s mouth that Wilder, 34, will be taking the fight with Fury in 2020. It would be a good idea for fans and Eddie Hearn to embrace what Finkel is saying, and stop wasting time discussing a scenario where Whyte will step in to face Fury this year if Wilder doesn’t take the fight.

Wilder might well indeed have lost his self-confidence from his defeat to Fury, but he’s not lost his common sense. He knows how much money he’ll make in fighting Fury this year, and he’s not going to make similar money facing anyone else in the division.

Deontay has no choice but to face Fury

The only other big name in the weight class is Anthony Joshua, and he won’t touch Wilder with a ten-foot pole right now, given his well-publicized loss to Fury.

If Wilder doesn’t face Fury again, he’ll have a long road back to try and get back to the status he once held as the unbeaten WBC champion. He won’t be desirable as an opponent or Joshua if he doesn’t at least attempt to gain recapture his belt from Fury.

Wilder can still make decent money as a condenser due to his name, but it won’t be the same type of paydays that he once received as the WBC champion. At this point, it’s all or none for Wilder. He either faces Fury or his career sinks into oblivion with him being ignored by Joshua for the rest of his career.

To have a shot at avenging his loss to Fury, Wilder needs to trim down, and focus on starting a lot faster. He can’t come out of the blocks slow, sluggish, and looking confident.

Fury will smash Wilder if he fights the same way he did in the last fight, and he knows this. Staying off the ropes would be a good idea for Wilder, as would him backing up the way he did in their rematch. Wilder looked gunshy against Fury, and he let him walk him down the entire fight.

There’s not much Wilder can do to change his lack of an inside game. As such, that’s going to be a painful area for him to improve on.

Deontay has a puncher’s chance against Fury

There’s nothing for Joshua to gain in fighting Wilder, and everything to lose at this point. Joshua wanted to fight Wilder for the last three years, and the two heavyweights were never able to agree on a fight.

For Wilder to get a match against Joshua, he’ll need to avenge his loss to Fury in December and then defeated Whyte. Everything is in Wilder’s hands.

Against Fury, Wilder will have a puncher’s chance, and not a good one. He’ll need to bomb Fury out early before he starts using his 40 to 50+ pound weight advantage over Wilder to club him into submission like the last time. 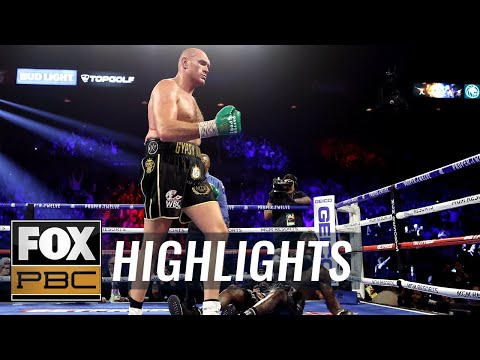 WBC president Mauricio Sulaiman is open to the idea of Whyte facing Fury this year if the two sides can reach an agreement, and if Wilder doesn’t take the fight.

Wilder had bicep surgery this year, and there were concerns about whether his arm has been rehabbed for him to come back in 2020. Fighting Fury is hard enough even when a fighter is 100% healthy. But if Wilder is only at 50% for the match, he’s not going to last long against ‘The Gypsy King’ in that situation.

“We want Dillian Whyte to fight Tyson Fury as soon as possible, and if Wilder is not available for any reason then Dillian should step in and take that,” Hearn said to Sky Sports Boxing.

Hearn is being a good promoter in speaking up for Whyte, but he’s going to have to wait for the dust to clear from the Fury vs. Wilder III fight before Dillian gets his chance. Whyte should keep his attention on his next opponent Alexander Povetkin on August 22.