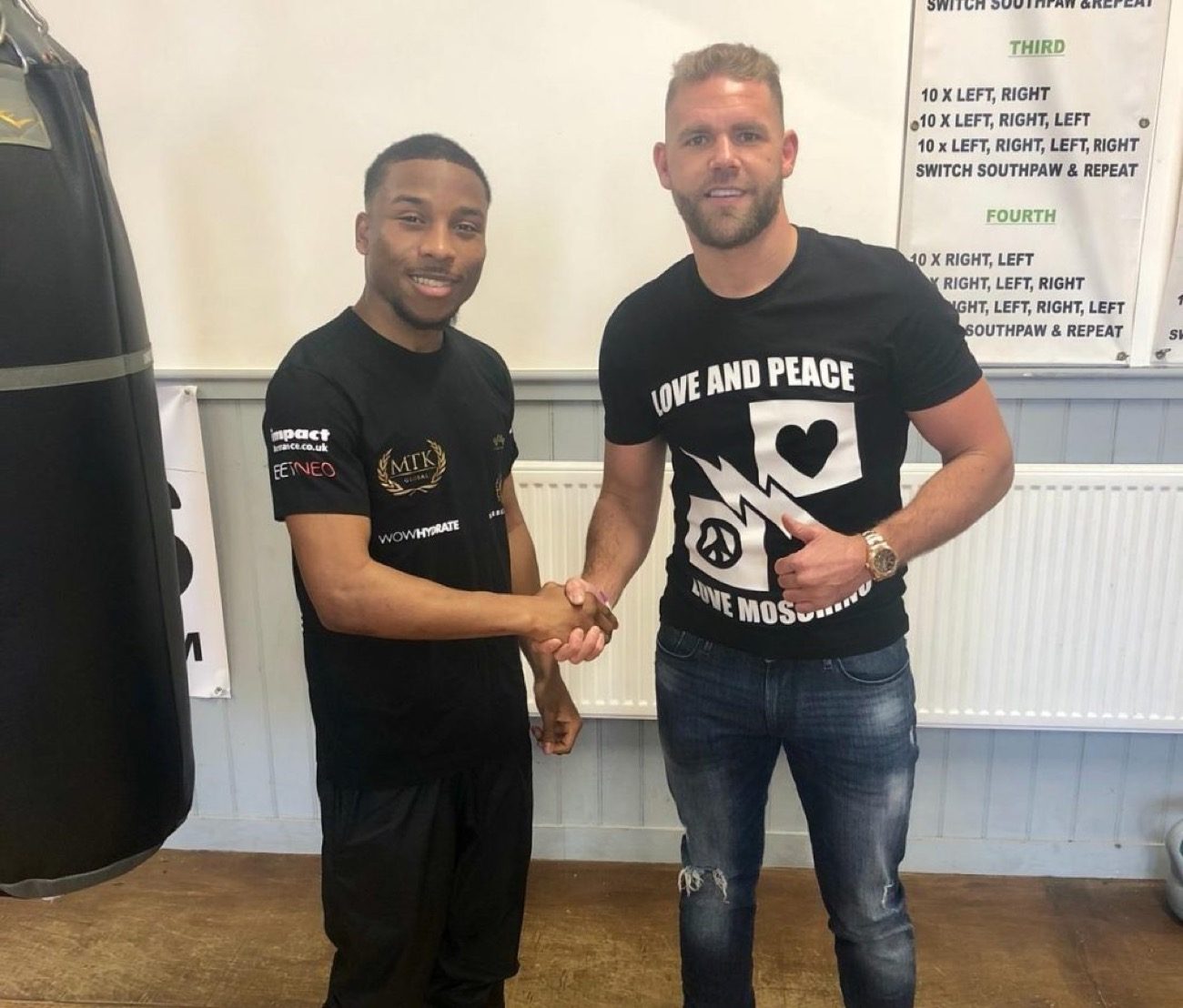 By Charles Brun: The British Boxing Board of Control has leveled a stiff $19,000 [£15,000 ] fine to Billy Joe Saunders for a social media video he posted that gave instructions on the subject of domestic violence.

Although Saunders (29-0, 14 KOs) appeared to be joking in the video, many fans were angered by his comments, which led to a firestorm of criticism.

In the video, WBO 168-lb champion Saunders gave how-to instructions to men, telling them how they can quiet down their female partners during the pandemic. Saunders had a heavy bag that he used as a prop in the video in where to place punches.

Saunder’s boxing license with the BBBofC is no longer suspended, and he can now resume his 11-year pro career. He recently pulled his name out of the running for a fight against Canelo Alvarez for September 12.

At the time Billy Joe made this decision, he was the leading candidate to get the fight. Saunders hasn’t fought since defeating Marcelo Esteban Coceres last November. He’d like to get back in the ring by October at the earliest and December at the latest this year.

“I don’t care if it happens,” said Saunders to IFL TV on a fight against Canelo. “I’m a two-weight world champion. It’s not a bad career, is it? So if that fight doesn’t happen, the only thing I can control is winning.

“So if I keep winning, the public will demand it, and maybe it’ll happen. Perhaps it won’t. There’s Callum Smith; there’s Andrade. I don’t think Callum Smith is going to get the fight [against Alvarez] because the money is not there. 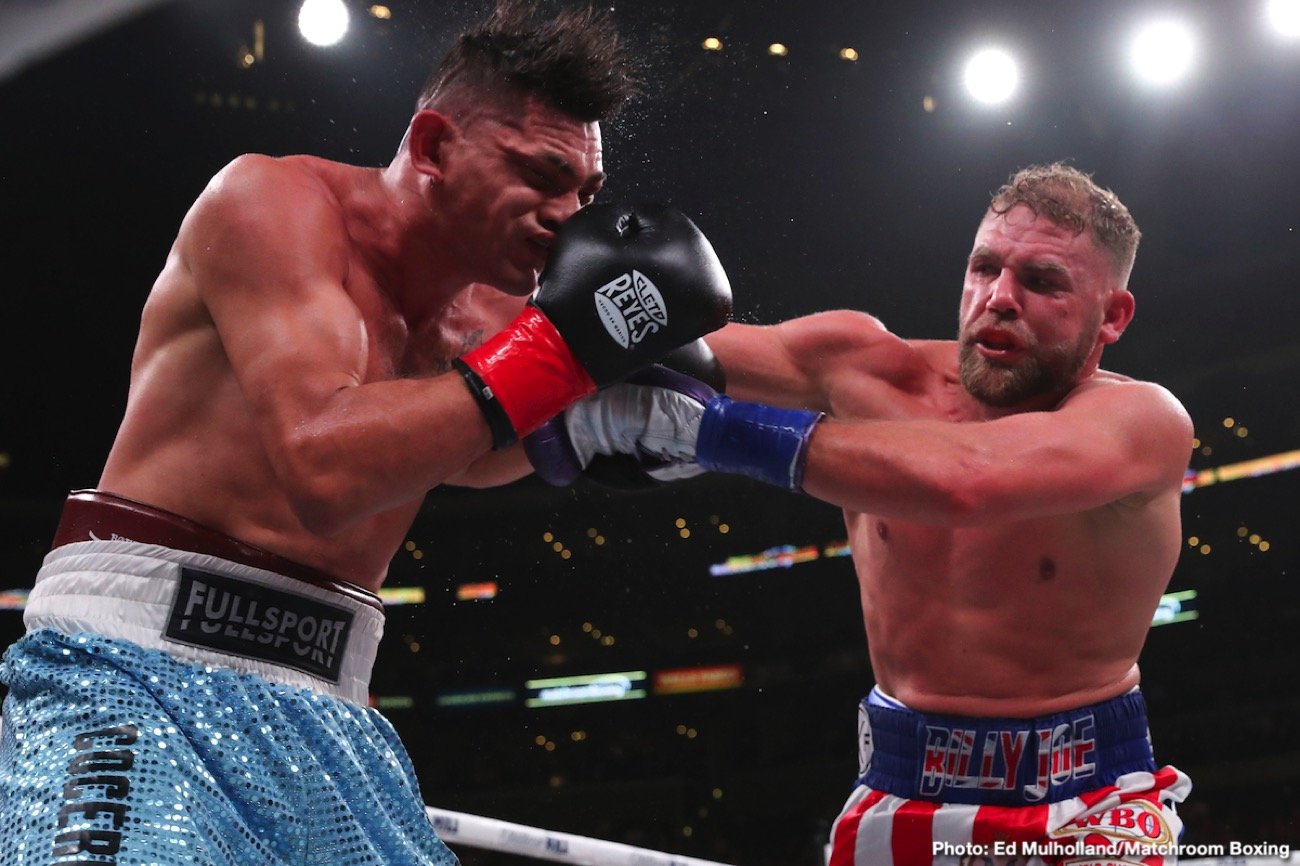 “The way they will offer Callum Smith, they’ll say, ‘Okay, Callum, we’ll give you your money. You’ve got an eight-pound weight restriction clause,’ which Callum is not going to take.

They’ll [Golden Boy] offer him the money, and then say, ‘We offered Callum Smith, but he didn’t want it. So I think someone like Tureano Johnson [might get the Canelo fight].

“I don’t think DAZN would be comfortable with that sort of opponent [Jason Quigley] at the minute, you know? He’s not going to fight a Golden Boy fighter because he doesn’t want Oscar De La Hoya to have a few quid,” said Saunders.

Saunders hopes to fight this year

Saunders said last week that his promoter Eddie Hearn will be giving him a new date for his next fight, and he’s hoping to get out later this year. He wants to make sure he gets at least one title defense before the end of 2020, but we’ll have to see.

The options available for Billy Joe’s next contender are slim, unfortunately. While he’s talked about wanting to take on WBA Super World 168lb champion Callum Smith, that fight isn’t possible this year. Saunders-Smith needs a crowd for it to have a realistic shot at occurring. That means next year or later.

WBO middleweight champion Demetrius Andrade has thrown his name into the hat as a potential opponent for Saunders, but that’s the same situation as Callum. Saunders vs. Andrade would need a crowd for it to take place this year.

Even then, Saunders, 30, has never shown an eagerness to want to battle Demetrius, which is understandable. The 2008 U.S Olympian Andrade isn’t a famous fighter in the U.S, and there wouldn’t be much for Saunders to gain in defending against him.

Hardcore boxing fans would give Saunders massive respect if he elected to face Andrade, as it’s a match that would interest a lot of them. Many of the fans would watch it hoping to see Billy Joe lose for the first time.

There’s a growing perception some fans have that Saunders has dodged Andrade for years. The only way Saunders can prove that he’s not afraid of the American is to schedule a fight with him, and that’s up to Eddie Hearn to make it happen.

Callum and Demetrius would likely agree to a fight with Saunders in a second if it were offered to them, but Saunders has to want to face them.

“The only two fights I want to happen this year is Callum Smith or Andrade,” said Saunders. “I’ve got history with Andrade, and Callum is a unification fight. So those two fights make real sense, and I can see one of them definitely happening.

“I don’t even want to talk about him,” said Saunders when asked if he’d like to fight Chris Eubank Jr. “He’s a waste of time and a waste of space. He’s got nothing. No one is interested. Let him go win something. Let him get on the map somewhere, and then maybe we’ll consider it.

“I’m looking at the big fights, the world elite fighters, that’s what I’m looking at,” said Billy Joe on his next fight. “And also on a fair and evening playing field. I talked to MTK a couple of days ago, and they’re touching base with Eddie.

“This year, the pandemic has put a spanner in the works for everybody. I’m with Eddie Hearn, one of the best promoters in the world. All I can do is put my trust in him to make a big fight, and let’s see where we go,” said Saunders.

It’s one thing for Saunders to talk about wanting to face Andrade and Callum, and another thing for him to make those fights happen. 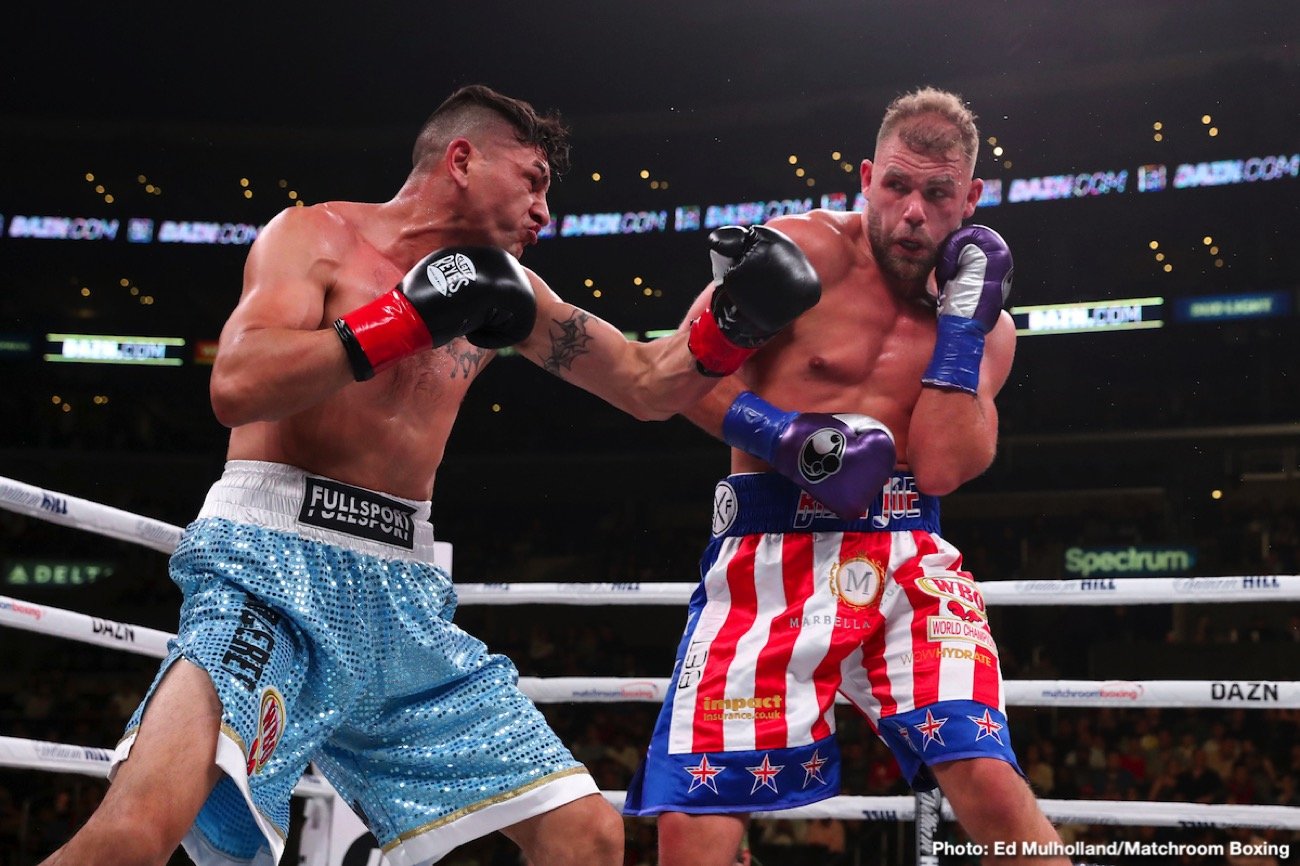 “If that fight [Fury-Wilder 3] happens now, Wilder’s heart is broken now. He’s a broken man. He’s never going to be the same. You’re never going to glue him back together. When it comes to Tyson Fury, he’s shattered him. He’s done.

“There was so much that went into the first fight, and then the game plan changed completely. Tyson went in there and beat him at his own game, and I think it shattered him and finished him off.

“No, I don’t believe that,” said Saunders when asked if he thinks Wilder will ever be the same fighter again. “Not when Tyson Fury is involved. Let’s say he [Deontay] wants to stand back and box; that’s going to be an easy night for Tyson. Tyson went out there and backed him up, broke him down, and punched the s*** out of him.

“So he’s never going to be the same man. He’s a good fighter, and he’s a good puncher. He’s always got a puncher’s chance. But he hit Tyson with his best, and Tyson got back up in the first fight that he should have won. He stopped him in the second fight. Tyson fury is the main man,” said Saunders.

Deontay Wilder still has a chance to redeem himself in his trilogy fight this year against Tyson Fury. Fans are eager to see which of the two giant heavyweights will emerge as the winner of that match.