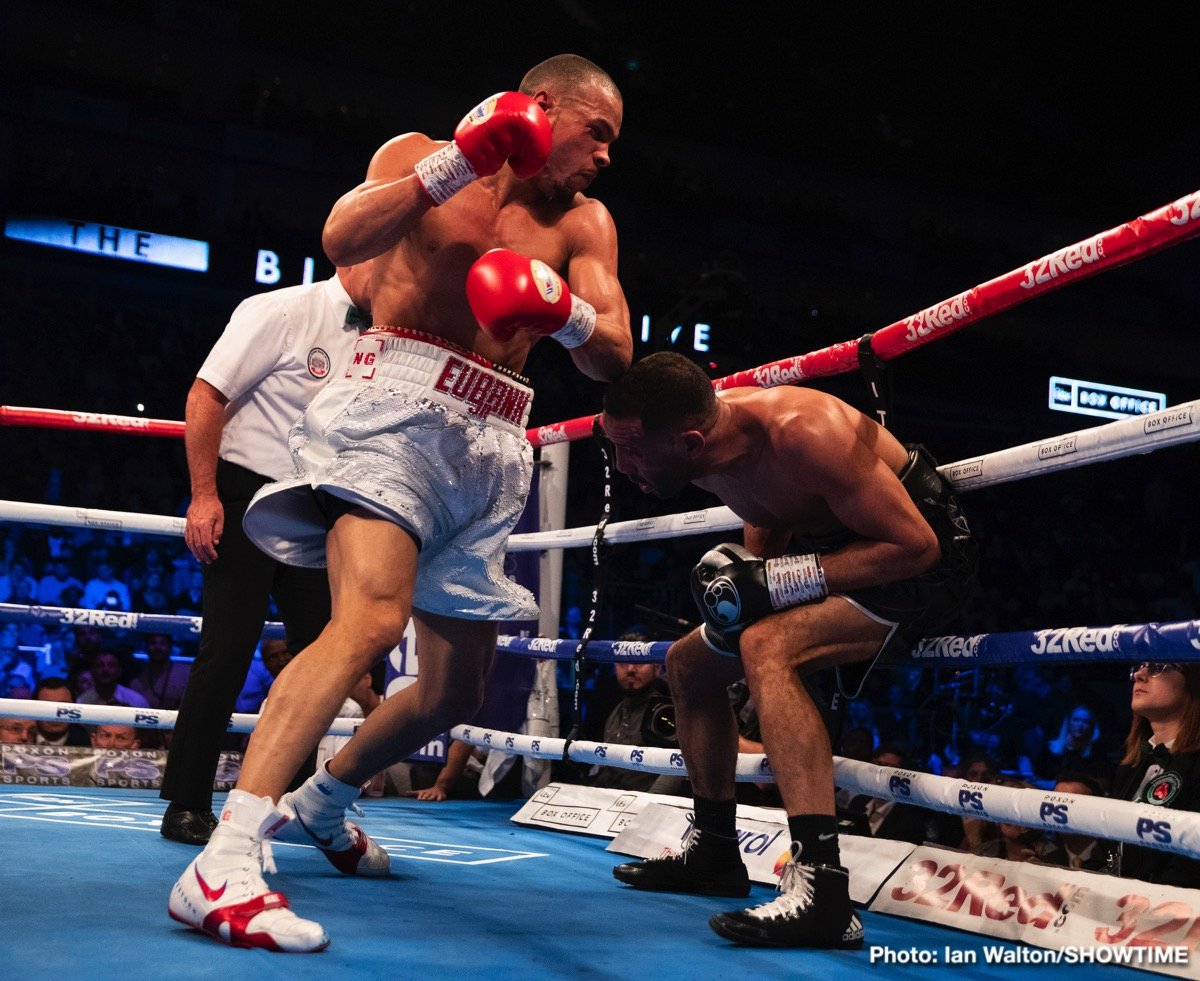 By Sean Jones: Chris Eubank Jr has thrown his name into the ring as a potential opponent for Canelo Alvarez to fight on September 12. The former IBO super-middleweight champion Eubank Jr (29-2, 22 KOs) joins the growing list of top fighters from the 168-pound division that are volunteering to face the Mexican star Canelo for his next fight.

For the fans that might not be excited about seeing Canelo face Eubank Jr, they’ve got to realize the alternatives are much worse. If Canelo doesn’t fight Eubank Jr, then he’ll likely end up with John Ryder or David Lemieux. Those would be one-sided fights for Canelo against those two guys.

The lead guy for the Canelo fight, Billy Joe Saunders, has pulled his name off the list after complaining about not wanting to take a reduced offer. Saunders also said that there wasn’t enough time for him to train for the Canelo fight with two months to go.

Saunders’ comment has led to a tremendous backlash from boxing fans, who have ridiculed Saunders for not taking the fight. He has ten weeks to train, which should be enough time.

Eubank Jr will make it an entertaining fight between him and Canelo because he’s a volume puncher, and he’s the type of guy that can beat him. Canelo can’t handle prolonged attacks because he needs his rest breaks, and Eubank Jr won’t allow him to take it easy. He’s going to press Canelo the entire fight, and force him to work harder than his body will let him.

Saunders likely would have made it boring against Canelo by spoiling the entire time and putting the boxing fans asleep. With Eubank, you know you’re going to watch an action-packed fight between him and Canelo for as long as it lasts.

If Eubank Jr can get inside on Canelo, he could make him miserable with his nonstop uppercuts and hooks. Gennadiy Golovkin had his most success against Canelo in hitting him with uppercuts.

Eubank’s favorite punch is his uppercut, and he can’t throw it repeatedly. He might take Canelo’s head off with those shots if he can land it all night.

Three of Billy Joe’s former opponents have all expressed interest in facing Canelo on September 12, and they have no problem with getting ready.

These are the former Saunders’ opponents that have volunteered to face Canelo:

Of those three, Eubank Jr is the best by far in terms of his ability to give Canelo a tough fight. Ryder and Lemieux would be food for Canelo, and wouldn’t have a chance of winning.

If Golden Boy really wants the cheapest opponent for Canelo, then it’s hard to predict who will end up getting it. Eubank Jr might not be interested in getting little money while Canelo enjoys his $33 million paycheck that he gets from DAZN for the September 12 fight. With Canelo getting that kind of money for the match, Eubank Jr might feel weird if he’s offered a small fraction of that amount. 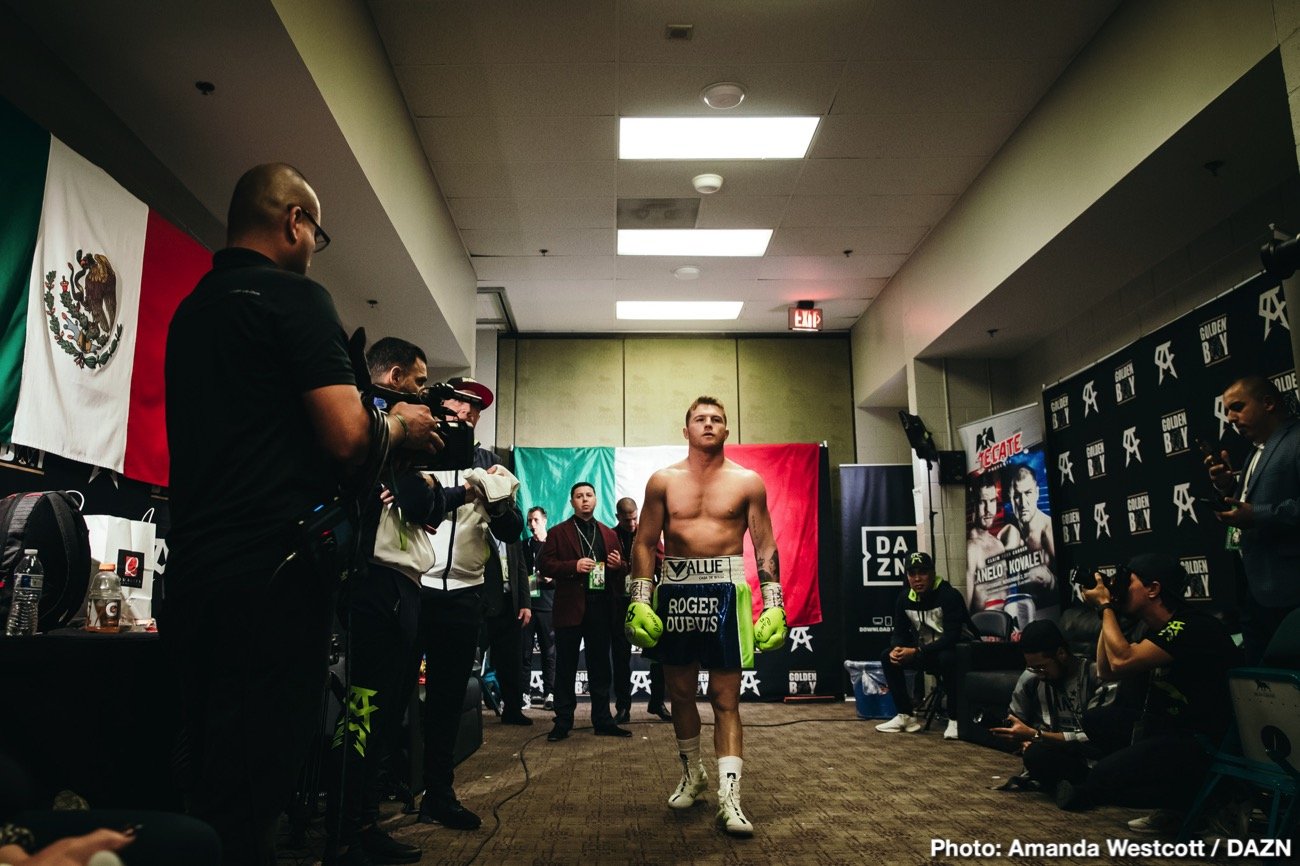 In a Tweet on social media on Friday, the 30-year-old Eubank Jr volunteered for the job to face Alvarez and said he would take the fight on two day’s notice.

Billy Bottle Job Saunders wont fight Canelo in two months??… I’m ready to go in 2 days!!! So a fight in September!? NO PROBLEM

Chris Jr would make Billy Joe look bad if he takes the fight with Canelo, and winds up beating him. Saunders will see red if that happens. Even if Eubank Jr gets the fight, Saunders probably won’t be pleased because it could have been him that had faced Canelo.

Alvarez will be giving fans a good fight

Eubank Jr would be an excellent choice for Canelo (53-1-2, 36 KOs) to fight on September 12. It would be an upgrade from the Golden Boy’s star’s last fight against Sergey Kovalev last November.

Kovalev looked elderly, and couldn’t do anything against Canelo. Eubank Jr is a far better fighter, and he’ll be giving Canelo the fight of his life potentially.

What’s unclear is whether Eubank Jr will be willing to agree to the less than colossal money that he’s offered from Golden Boy. Canelo’s promoter Oscar De La Hoya was complaining in an interview this week that all the guys that they’ve been trying to get as an opponent for him have priced themselves out.

Saunders is likely assuming that he’ll be given another offer from Golden Boy after the pandemic ends in 2021, and he’ll make the big money that he was initially going to get.

In the meantime, Saunders will need to keep winning long enough to get a sweetened offer from Golden Boy in 2021 or 2022. It makes sense for Saunders to do this because he can potentially make millions more by waiting until the pandemic ends to face Canelo.

If Golden Boy never makes another offer to Saunders again, then his gambit will have failed. What Saunders has working in his favor is the fact that Canelo isn’t showing an eagerness to face the talented fighters at 168 or 175.

Canelo has been going for the weaker opponents and ignoring the dangerous fighters. That’s why it’s likely Canelo, and Golden Bou will return to the negotiations with Saunders sooner or later. He’s a winnable fight for Canelo.

On the other hand, David Benavidez, Caleb Plant, Dmitry Bivol, Demetrius Andrade, Artur Beterbiev and Jermall Charlo are all risky matches for Canelo.

Eubank Jr has won his last three fights since losing to George Groves by a 12 round decision in 2017. In Eubank’s previous contest, he beat Matt Korobov by a second-round stoppage last December. Korobov suffered a shoulder injury and was unable to continue fighting. In Eubank’s two fights before that, he beat James DeGale and JJ McDonagh.

Eubank Jr will need to beat the stuffing out of Canelo to earn a win because he’s likely going to stage this fight in Las Vegas.