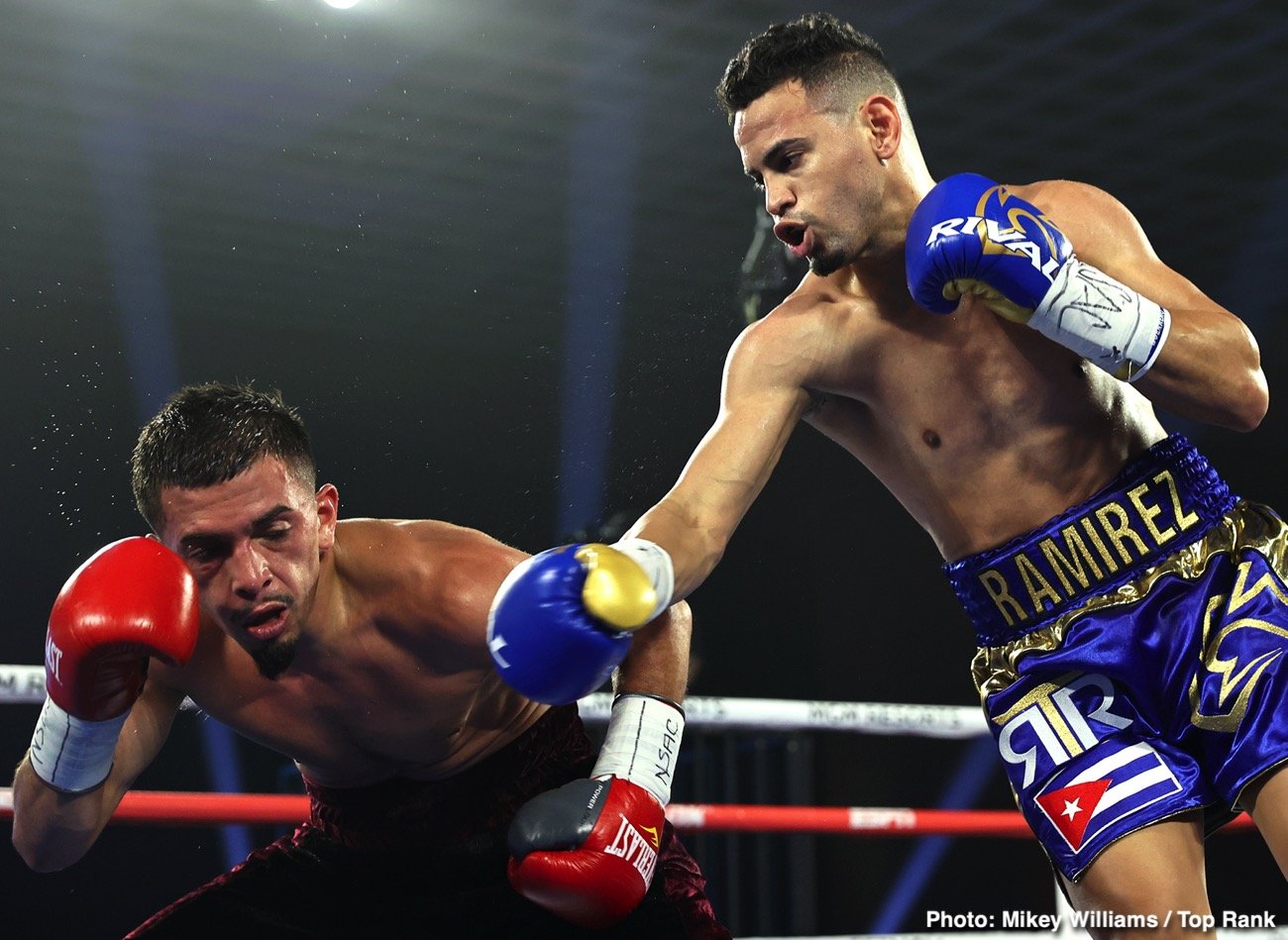 By Jim Maltzman: Robeisy Ramirez (4-1, 3 KOs) avenged his defeat from last year by beating Adan Gonzales 5-3-2, 2 KOs) by a lopsided six-round unanimous decision on Thursday night at The Bubble at the MGM Grand in Las Vegas, Nevada.

The two-time Olympic gold medalist Ramirez (4-1, 3 KOs) showed off his amazing boxing talent in completely schooling the 23-year-old Gonzales, who pulled off a major upset last year in August in beating the talented Cuban by a four-round split decision in Philadelphia.

“I wanted to put our first fight behind me, and I did that,” Robeisy stated after the contest. “Ever since our first fight, I wanted the rematch. I am glad this chapter of my career is behind me now. A couple more rounds and I could’ve scored the knockout, said Ramirez.

The nightmare is over for Ramirez with his victory over Gonzales, and he can now move on. Gonzales asked Ramirez to give up a trilogy match after the fight but that’s not likely to happen. Ramirez needs to move on to bigger and better things.

Ramirez, 26, wasn’t going to let Gonzalez pull off another upset, as he went after him from the opening bell, landing hard shots and nice jabs. Robeisy wasn’t going to allow Gonzales to steal rounds by outworking him like he did last time, and he made sure he matched his work rate.

In the second round, Robeisy bumped Gonzales hard with a shoulder check and hit him after the bell. Robeisy showed that he was serious this time, and he wasn’t going to be lackadaisical like the last time they fought.

In rounds five and six, Ramirez started to sit down on his shots, and he punished Gonzales. Gonzales looked beleaguered in the sixth round with all the hard uppercuts and hooks that Robeisy was hitting him with from the motivated Cuban. He was getting dominated by Ramirez, and there wasn’t anything he could do other than take the punches.

All in all, it was an excellent performance by Robeisy Ramirez in getting revenge for his loss to Adan Gonzales last year. The only criticism that I have of Ramirez’s effort tonight was his inability to knockout Gonzales. Ramirez has got to be able to KO guys at the level he’s fighting at this early point in his career.

The fact that Ramirez wasn’t able to stop Gonzales suggests to me that he’s fighting in the wrong weight class. Ramirez should be at 122 right now, and not 126.

He looks soft in the body at featherweight, and he doesn’t have the same kind of punching power as some of the other fighters in the weight class. You can tell from looking at Robeisy’s physique that he’s carrying an extra five pounds of fat that he should trim off. 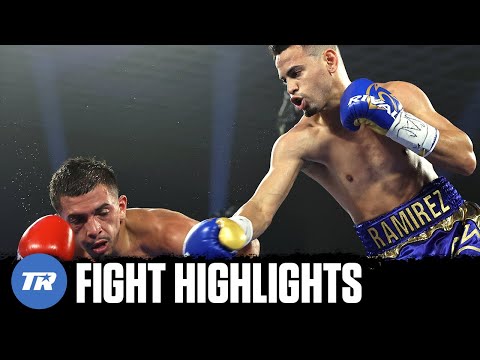 More opportunities for Ramirez at 126

It’s understandable why Ramirez is choosing to fight at 126, though. There are no big names at 122, and Ramirez won’t make money if he competes in that weight class. To get the nice paydays, Ramirez needs to be at 126 at the very least so he can fight the likes of Shakur Stevenson, Leo Santa Cruz, Josh Warrington, and Gary Russell Jr.

In the main event, former two-division world champion Jose Pedraza will be facing former world title champion Mikkel LesPierre in a fight at 140. It should be interesting to watch how Pedraza does in his second fight at light-welterweight. Pedraza doesn’t look at this weight, and unless he shows improvement, his career could go down the drain.

Showing that he still has a lot left in the tank, Jose ‘The Sniper’ Pedraza boxed his way to a wide 10-round unanimous decision over Mikkel LesPierre in the main event in a fight at light-welterweight. Pedraza knocked LesPierre down in rounds five and

LesPierre, 35, knocked Pedraza down in the fifth, which was a rough and tumble round. Pedraza returned the favor in knocking LesPierre down in the same minute. It was later learned that LesPierre’s knockdown was from a trip. 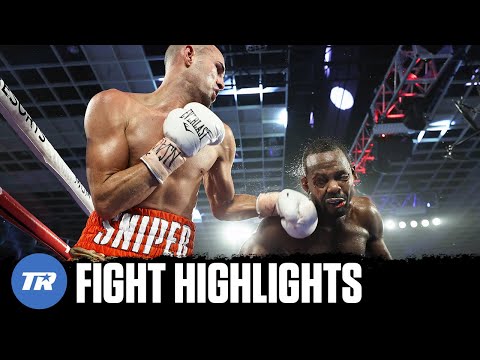 Ibeh (5-1, 4 KOs) took the fight to Mailata (4-1, 2 KOs), nailing him with shots. Both guys were looking to end the contest with one punch, which resulted in them looking sloppy. Ibeh was able to do better work early on in rounds one and two.

Mailata started coming on in the third and landing shots against the tiring Ibeh. The body shots from Mailata were effective. In round four, five and six, both guys were dragged with their shots, and they had nothing left in the tank.

Light welterweight Elvis Rodriguez made Quik work of Daniel Murray in knocking him out in the first round. Rodriguez landed a hard jab that dropped Murray hard. The shot from Rodriguez (7-1, 7 KOs) caused Murray (5-4) to hang through the ropes, which forced referee Robert Hoyle to stop it.

It was a god knockout by the Freddie Roach trained Rodriguez but his opponent was so bad that you can’t get too excited about it. Rodriguez does have a lot of power, but whether he can score knockouts over the top guys at 140 is another matter.

Murray would have been knocked out by almost anyone in the top 15 at light-welterweight if they’d been in there with him tonight. 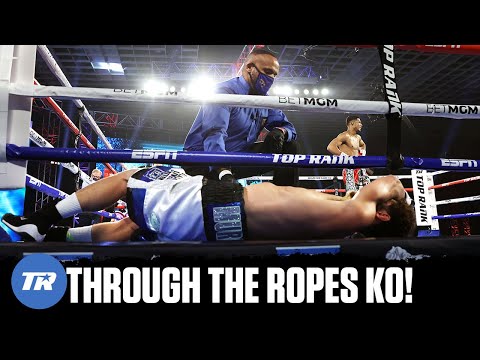 Bell’s huge reach made it impossible for Bernaldez to get to him with any degree of success in the fight. You’ve got to give Bell credit for being smart and using his reach. However, may have a difficult time when he eventually faces the elite in the super featherweight division.

Down the stretch, Bell did a good job of keeping Bernaldez from getting in punching range to land. 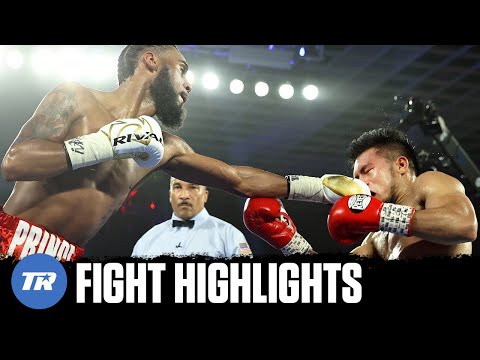