Anthony Joshua: What do people see in Tyson Fury? He hasn’t been in the deep end 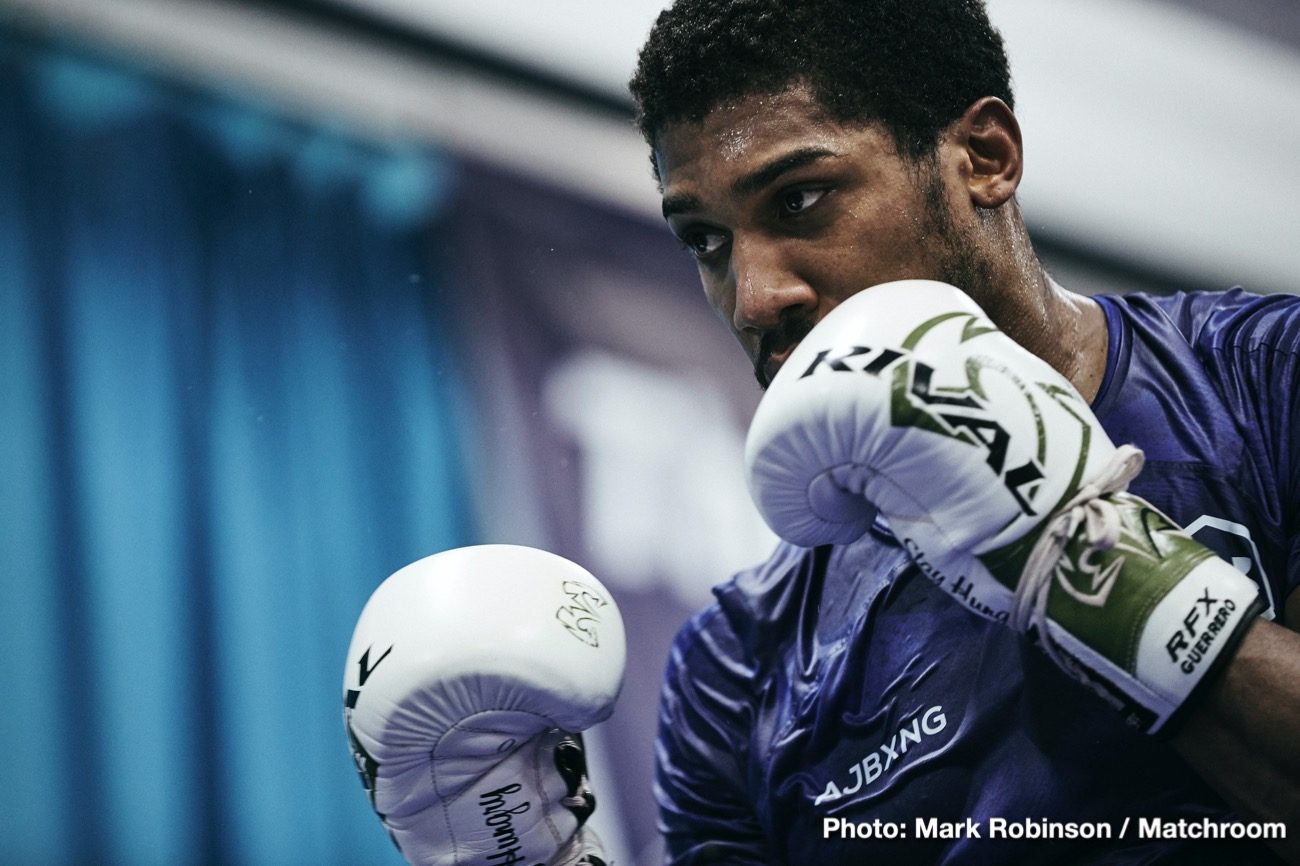 By Charles Brun: Anthony Joshua isn’t impressed with what he sees from Tyson Fury as far his experience goes in tough fights, and he wonders what fans see in him. Joshua (23-1, 21 KOs) views Fury as being untested still at this point in his 12-year professional career.

Fury will be turning 32 next month on August 12, and this is all he has to show for himself in terms of being in the deep end in grueling fights:

The rest of the fighters Fury has fought during his career has been easy wins over guys that either didn’t have the right game plan or were too scared to use it. Wladimir Klitschko would fall into the latter category.

Klitschko knew what he had to do to win, but he was too afraid to follow the game plan against Fury.

Joshua, 30, isn’t afraid to follow his trainer’s game plan, and he’s going to put it on Fury when they fight next year.

“I wonder what people see in Tyson Fury that’s so intimidating he can’t be touched?” said Joshua to Sky.

“I think he hasn’t been in the deep end enough. You don’t just go there once or twice. Continuously prove it vs championship fighters, that’s how you gain my respect.”

Wallin and Deontay Wilder both proved that Fury could be hit, but you’ve got to be willing to take a shot if you miss his head. That’s the problem that most of Fury’s opposition have had. They headhunted too much and ended up getting countered to pieces.

Interestingly, none of Fury’s opponents have been wise enough to target his midsection, which is an inviting target.

Fury has been lucky up to now

Most heavyweights nowadays weren’t trained to throw body shots. So when their trainers tell them to target Fury’s soft midsection, they can’t follow the instructions because they’ve never thrown body shots with any consistency.

How to beat Fury: A fighter needs to target his body 80% of the time, and only go upstairs when they’re sure they can land. The 1980s heavyweight Gerry Cooney said that if he fought Fury, he would have targeted his flabby midsection right away with his left hooks, and he would have worked him over.

While Fury is excellent at avoiding shots to the head, he’s relatively pedestrian when it comes to getting out of the way of body shots. That shouldn’t be surprising, though, because Fury is 6’9″ and built like a stork. He can’t get out of the way of punches to the breadbasket, no matter how hard he tries.

So what Fury does is he pulls his boxing trunks up high to limit the target area for his opponents. It’s an old trick that fighters use when they know they’re facing a body puncher, and want to avoid getting hit.

The referees are supposed to instruct the fighters that they can’t have their trunks pulled up so high, but a lot of the times, nothing is done.

Joshua suspects Fury has been following him

“I miss boxing, but I’ve just been focusing on being the best person I can be in living good, eating healthy, and punching up Kubrat Pulev in a few months,” said Joshua. “I don’t have a solid date, and that’s difficult for me. I’m used to having guaranteed dates. I don’t have a guaranteed date at the minute.

“He’s probably following me around, and he blew his cover,” said Joshua about him bumping into Tyson Fury in Marbella, Spain. 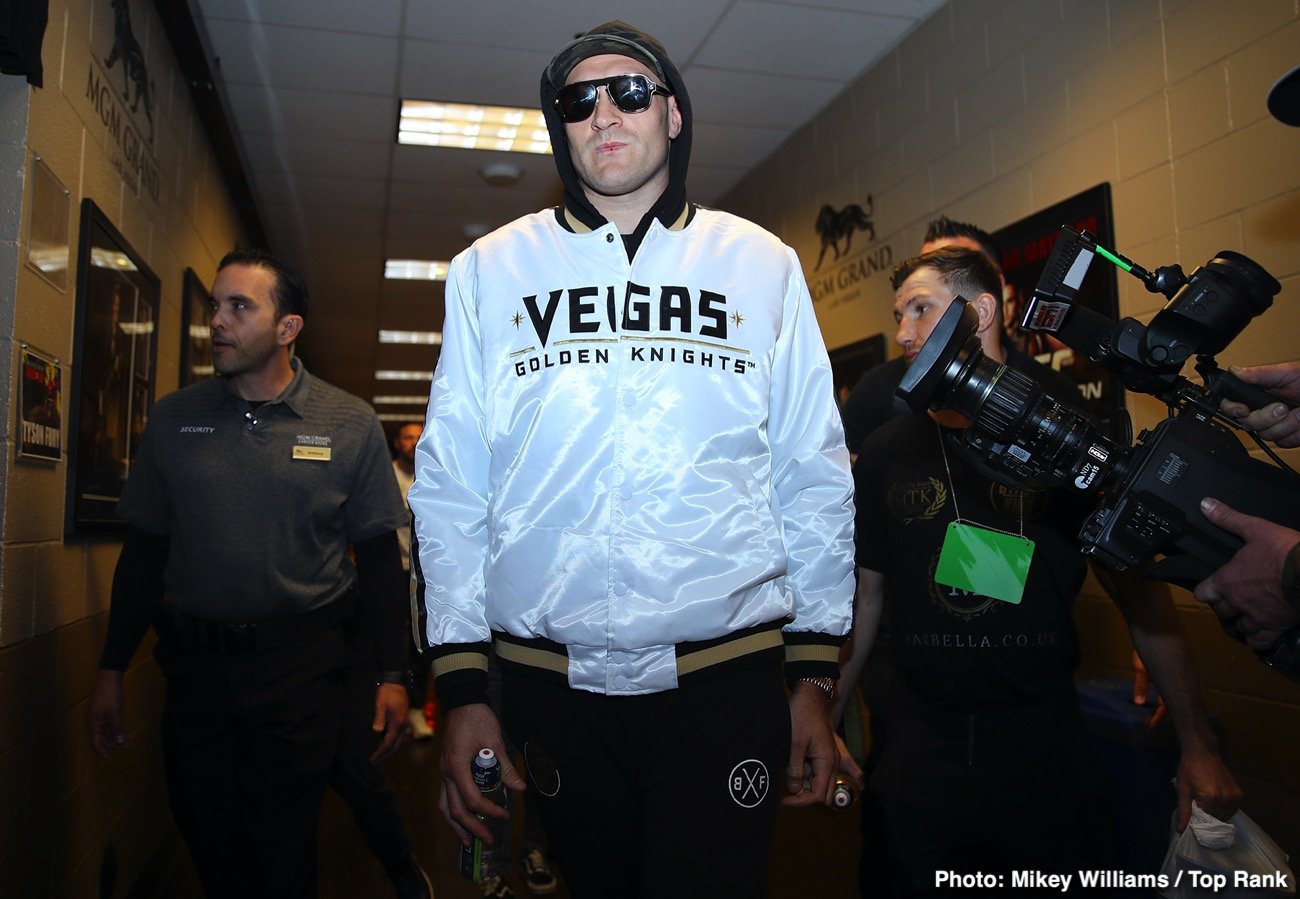 It looks like Matchroom Boxing promoter Eddie Hearn is still hoping that he can stage Joshua vs. Pulev in front of a live audience. What other explanation is there for why he still hasn’t scheduled the Joshua-Pulev fight? You’ve got to feel sorry for Joshua, considering he doesn’t have any idea when or where he’ll be fighting Pulev.

When you consider that Fury just happened to be on the same street at the same time a Joshua in Mabella, it’s easy to realize that this was a planned meeting on one or both of their parts. Joshua thinks Fury has been following him around, and he could be right.

It wouldn’t be a great shock to learn that Fury has a mole somewhere that is feeding him information daily about Joshua’s whereabouts and what he’s doing during training camp.

Ultimately, none of that may help Fury if Joshua takes it to him and targets his soft midsection. Like Canelo Alvarez, Fury knows how to get out of the way of punches to the head, but he’s helpless when his opponents hit him to the body.

That’s why ‘Big’ John McDermott arguably beat him in their first fight in September 2009. McDermott ignored Fury’s head, and went after his midsection and pounded the daylights out of him.

Later, when referee Terry O’Connor gave Fury the controversial 10 round points decision win by a 98-92 score, the boxing fans at ringside screamed bloody murder and booed like mad.

Weak Fury sounded like he was ready to start weeping as he was being interviewed in the ring while being showered with boos from angry boxing fans. It’s incredibly odd that Fury’s opponents failed to study the McDermott fight and learn from it.

You’ve got to blame the trainers for these fighters for failing to do the job because they should have been thinking body all the way when they fought Fury.

Who Will Canelo Alvarez Fight Next? »