Whyte: Fury has two choices – vacate or fight me

By Max Seitelman: Dillian Whyte is still on his campaign trail in talking exclusively about wanting his title shot in early next year against WBC heavyweight champion Tyson Fury. Whyte (27-1, 18 KOs) is overlooking his next opponent Alexander Povetkin, who he’s scheduled to face on August 22 at the Matchroom Boxing HQ in Brentwood, Essex.

Povetkin (35-2-1, 24 KOs) is too good of a fighter for Whyte or anyone to be overlooked, and yet that’s what he’s doing. Whyte is assuming that he’ll beat Povetkin and Fury will defeat Deontay Wilder in their third fight this year.

Also, Dillian says he’s been informed that the WBC is going to enforce his mandatory, and they WON’T give Fury the Franchise champion status. They want Fury to fight Whyte, and if he doesn’t, then he’ll be stripped.

Whyte doesn’t want to be elevated to WBC champ

“I wouldn’t be fighting for the vacant WBC belt because I’m the interim champion. I become an automatic world champion anyway,” said Dillian Whyte to IFL TV given a scenario where Fury is made Franchise champion.

The WBC finally put their foot down and said, ‘No, we’re not making him the Franchise champion. Dillian Whyte is mandatory, and you have to fight him.’

So it’s about time they recognize and realize what I’ve done and what I’ve earned. I’m glad they put an egg in Bob Arum’s face and told him to shut up.

“No, I want to fight Tyson Fury,” said Whyte when asked if he wants the WBC to hand him the title. “I want Luke Fury to stop messing about and fight. Man up and fight.

“Prove to the world that you’re Tyson Fury and not Luke Fury. If he runs away and doesn’t fight me, then he’s Luke forever.

“His real name is Luke. He’s a fake Tyson. Luke has always been the victim. He’s always playing the victim and getting away with it,” said Whyte.

The money that Whyte, 32, from fighting Fury will be well worth it to him to take the risk. Even if Whyte is humiliated by Fury the way he did to Dereck Chisora and Wilder in one-sided fights, the money will make it worthwhile.

It would be funny if the WBC turns around and still makes Fury their Franchise champion because, at that point, Whyte will be elevated to champ without getting the payday.

“‘Oh yeah, I got this. I got mental issues. I got stripped. After I fight Wilder, I’ll fight Dillian Whyte. No, I’m not fighting Dillian Whyte,'” said Whyte in talking about Fury’s victim playing. “He plays the victim the whole time. I’ve had enough of him playing the victim and getting away with it.

“He stole my mandatory positon. I’m hoping he doesn’t try to be a coward and vacate the belt. He’s talking crazy now. ‘No belt is going to tell me what to do.’ I’m sick and tired of heavyweight champions talking s*** and getting away, and they allow him to do it.

“Let him, man, up. He’s a grown-up man. He’s 31-years-old. Fight your mandatory. I’m your mandatory. He said before he was going to fight me before for the WBC Diamond belt, and then he turned down the fight when they make the fight.

“Now he says he’ll fight me when he defeats Wilder, and now he turns down the fight again. He keeps running away. He’s a marathon runner,” said Whyte.

Dillian might have things the opposite way around. It’s him that the boxing public is falling the victim. All the complaining Fury is doing. It makes him look.

“I’ve done everything to earn my shot, and they’re running away. Now they busted up from one forward to another coward. I’ve been mandatory for Deontay Wilder for three years or two years, but not world title shot.

“Tyson Fury is doing the same thing. That’s why I’m not a world champion because forwards like him. It’s a major fight. I don’t know why,” said Whyte about a match between him and Fury.

“Fury must be bi-polar because he says one thing in the morning, and then something else in the evening. He beat Deontay Wilder, and, of course, he’s going to boost him up because it makes his win look better to make him look better,” Whyte said.

When Whyte talks about having done everything to earn a title shot, he’s talking about his win over Oscar Rivas. Those to fought in the WBC title eliminator in 2019. Whyte’s other wins over the likes of Joseph Parker and Chisora don’t factor. 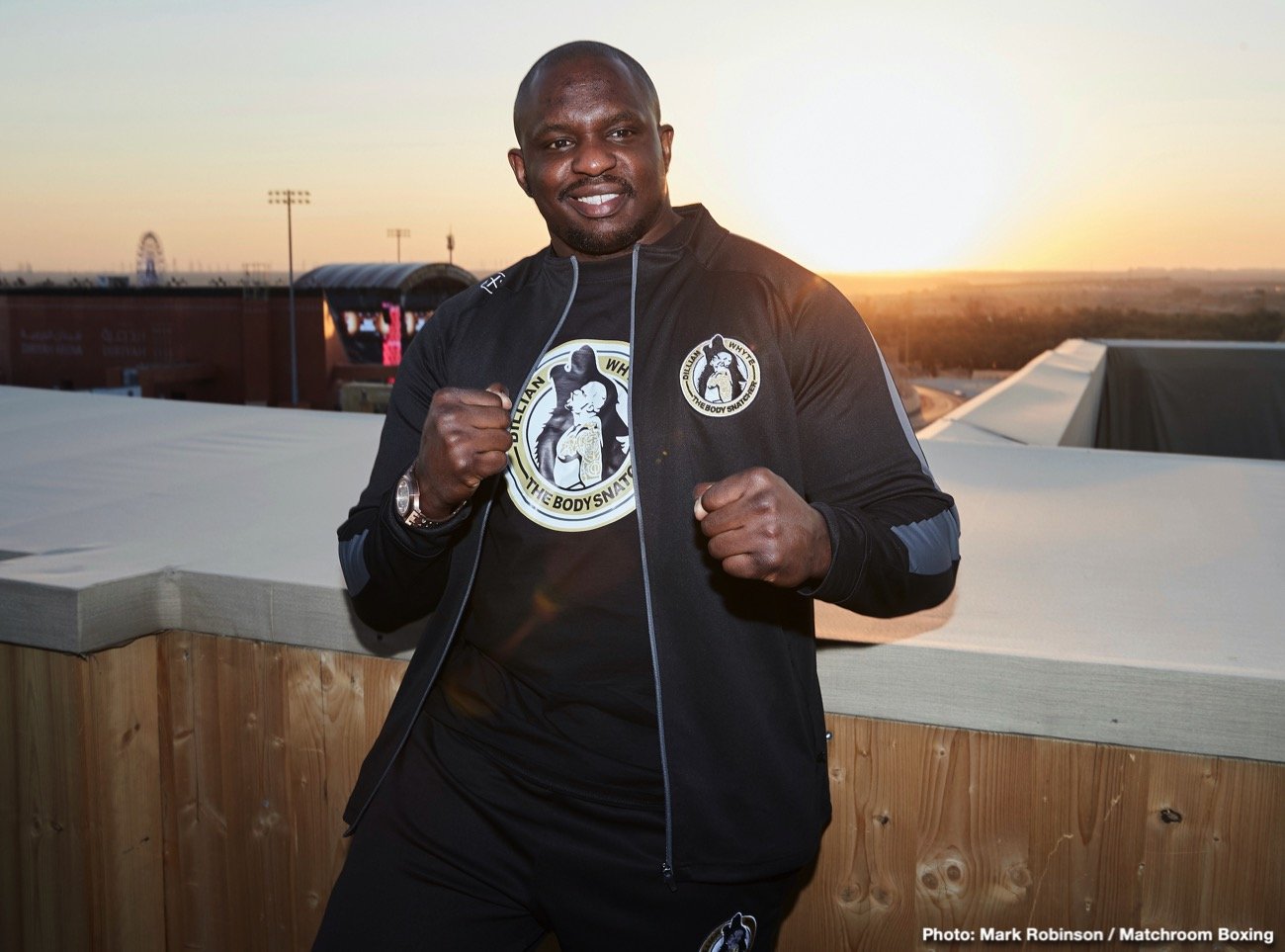 Whyte being prevented from achieving

“I’ve always said the way to beat Deontay Wilder is to push him back,” said Whyte in taking credit for Fury’s strategy he used to beat Wilder. “Go back and look at what I said.

“You push him back and knock him out. Deontay Wilder is athletic and can punch, but that’s it. The guy can’t box, he’s got no balance and no nothing.

“He’s athletic, and he’s got a big punch, which goes a lot way in the heavyweight division. The cowards like Luke, they come in ad try and take your position.

“The WBC is going to enforce the mandatory, so he’s got two choices,” said Whyte about Fury. “Be a coward and vacate the belt or fight me and the fight Joshua or be a coward.

“I don’t fear these guys, and they know it. He’s either going to vacate, or he’s going to fight me. And then the winner of that fight can fight Joshua for all the marbles.

Wilder wanted $7 million from Matchroom to fight Whyte, and that might be the main fight that didn’t happen. Deontay told Whyte that if he beat Luis Ortiz in a WBC ordered title eliminator; then he would have him. That didn’t happen though, as Whyte chose not to fight Ortiz.

Fury has only been the WBC champion since February, and he’s giving Wilder his trilogy that is contractually obligated. There’s no time for Fury to fight Whyte.

« Miguel Berchelt defeats Eleazar Valenzuela by a 6th round TKO