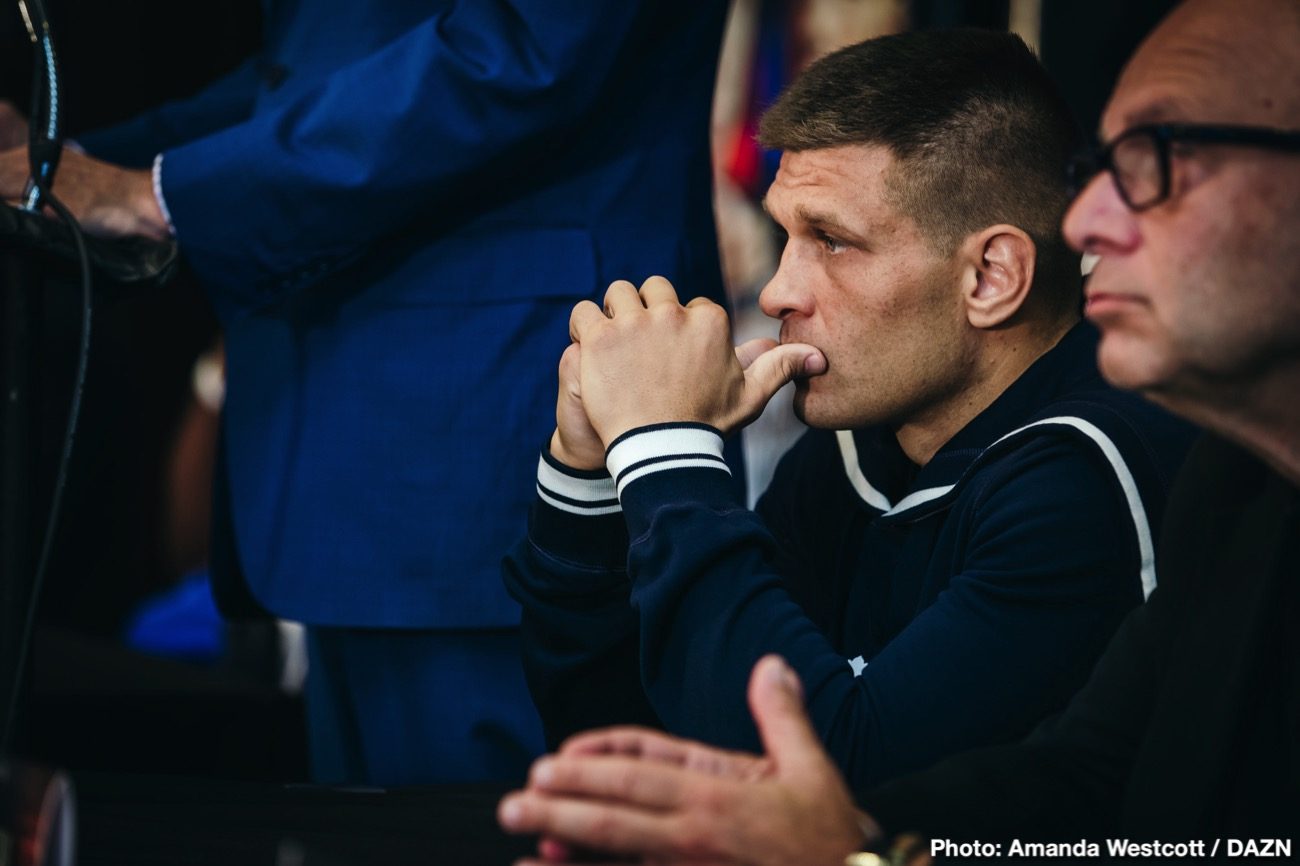 By Matt Lieberman: Sergiy ‘The Technician’ Derevyanchenko is hoping to get a title shot against WBC middleweight champion Jermall Charlo soon. Derevyanchenko will be fighting in September against a still to be determined opponent. He needs a quality guy to keep his name up there.

Ranked #1 with the World Boxing Council, Derevyachenko (13-2, 10 KOs) recently lost a controversial 12 round unanimous decision to Gennadiy ‘GGG’ Golovkin on October 5 last year. Derevyachenko proved to be an even better body puncher than Canelo Alvarez with the way that he was able to attack Golovkin to the body the entire. It was impressive.

Derevyanchenko changed angles and hit Golovkin to the body with both hands. Sergiy looked like a bigger version of Roman ‘Chocolatito’ Gonzalez with the way he landed to the midsection of GGG.

The two fighters were battling for the vacant IBF 160-pound title at Madison Square Garden in New York, and the judges felt that Gennadiy did enough to deserve the victory.

The fans overwhelmingly felt otherwise. Many of them booed the decision and continued to boo while Golovkin was being interviewed inside the ring.

After watching a replay of the fight, Derevyanhenko says he felt that he deserved the win. But he’s taken the defeat in stride and using it as motivation to work harder for another title shot.

The WBC must have felt the same way the fans did, as they’ve given Derevyanchenko a #1 ranking with their organization at 160 despite his loss to Golovkin. The WBC could have dropped Derevyanchenko down in their rankings after his defeat, but they obliviously were impressed with his performance and have him at #1.

With that ranking, Derevyanchenko will soon get a title shot against WBC middleweight champion Charlo. They’re both with Premier Boxing Champions, so it’s not a hard fight to make.

Charlo can make things earlier if he volunteers to give Derevanchenko a title shot without the WBC needing to order it, but we’ll have to see if he’s willing to make that move. Charlo hasn’t exactly been a massive risk-taker since being installed as the WBC  160-pound champion in 2019 by the sanctioning bodies.

In Charlo’s two voluntary defenses of his title, he’s beaten, Brandon Adams and Dennis Hogan. Those were soft defenses for Charlo. 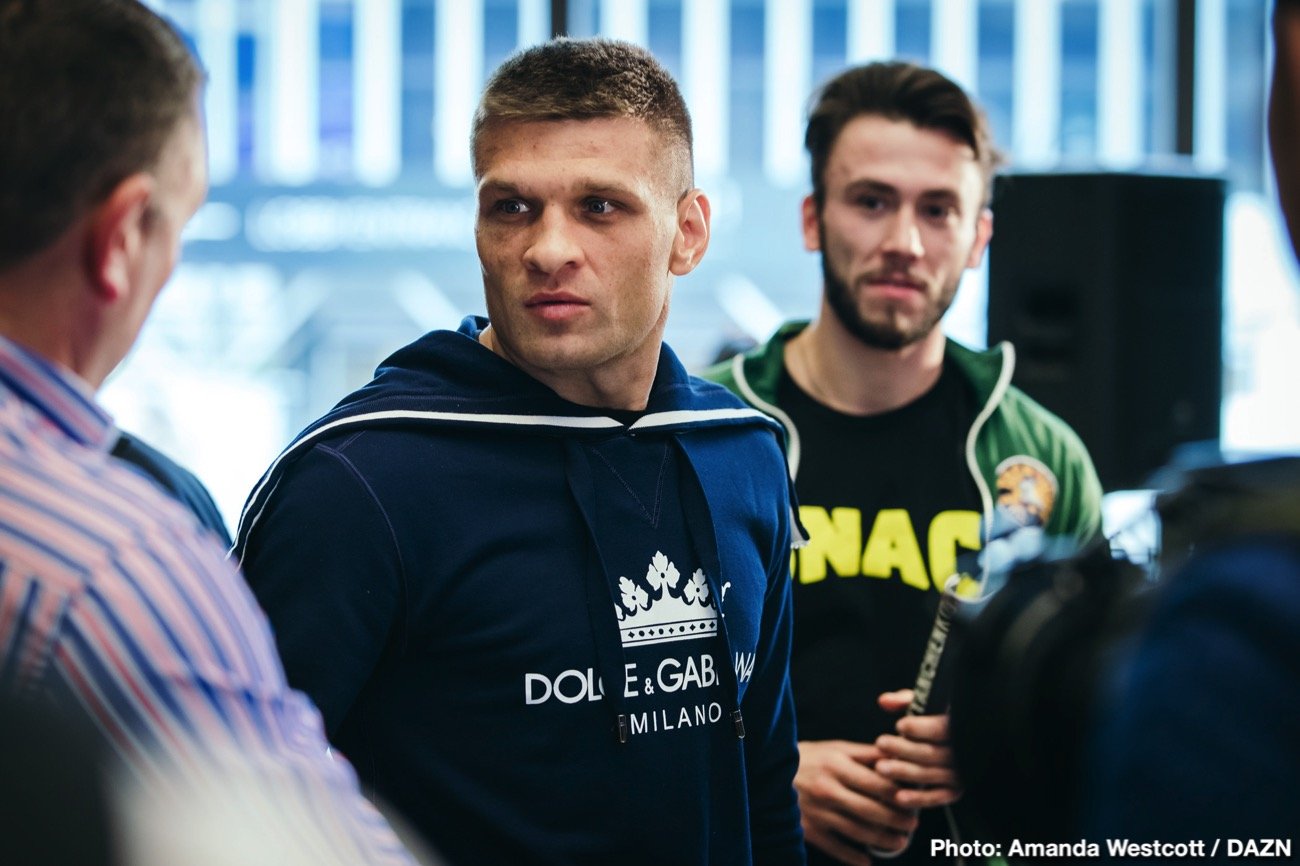 “I feel really good about my performance. That fight was in October, and while it’s behind me now, it’s so much motivation to work harder to prove to everyone that I belong with that competition. I am a world champion,” said Derevyanchenko.

After a good start in round one, Golovkin was out-worked by Derevyanchenko the rest of the way, and he was made to look old. The referee Harvey Dock got in the way of the action in round five and saved Golovkin from being knocked down.

Body shots from Derevyanchenko had hurt Golovkin, and he was backing away, ready to go down.

A lot of boxing fans are under the belief that Golovkin wanted another easy fight because he’s been struggling. He lost to Canelo and beat Daniel Jacobs and Derevyanchenko by controversial decisions. In GGG’s first fight on his DAZN contract, he had an easy battle against 35-year-old super-middleweight Steve Rolls.

Boxing fans had never heard of Rolls, and it was a strange fight for Golovkin to be taking. Again, it’s unclear why Team Golovkin wanted him to fight another unknown fighter that the U.S fans weren’t familiar with and didn’t care to see. 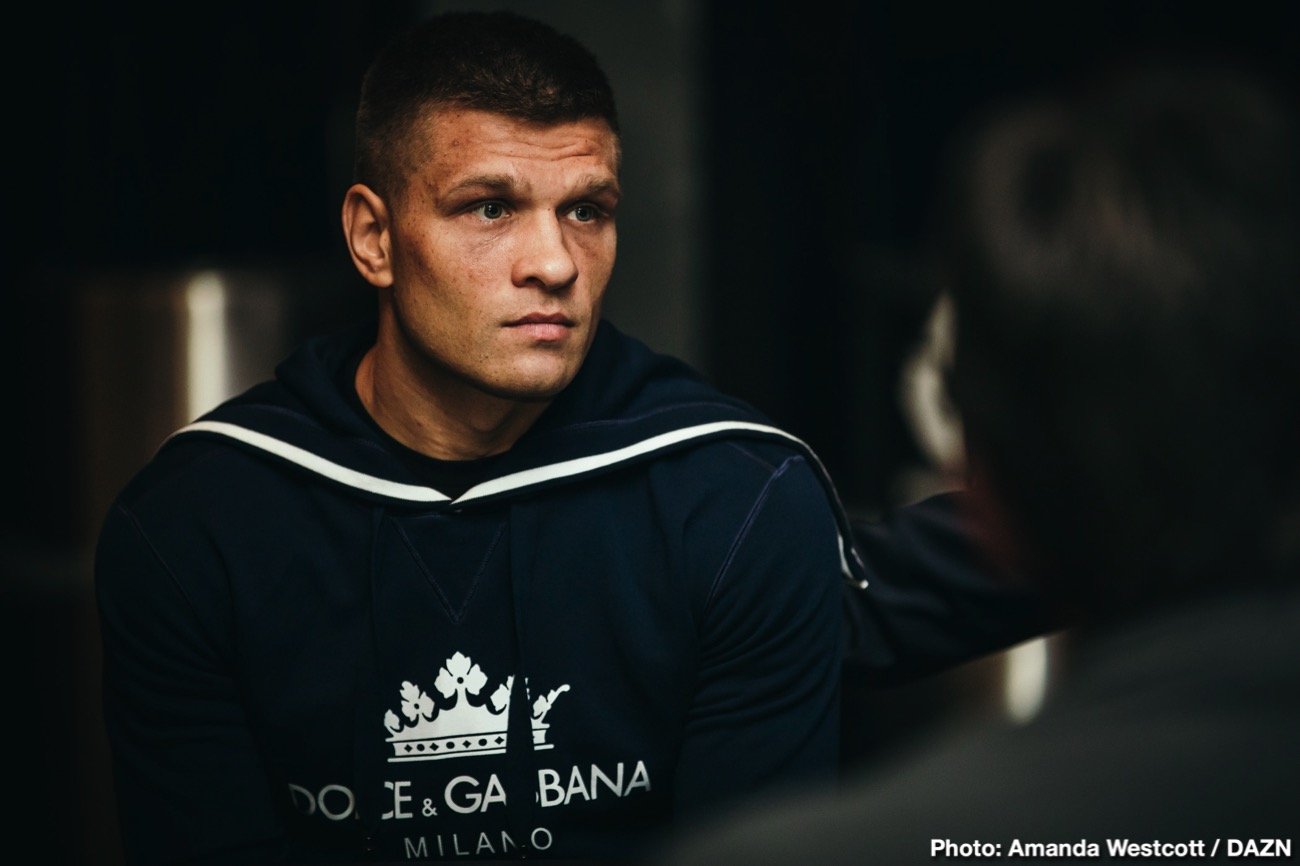 “I think so, and in time that fight will happen,” said Derevyanchenko on a fight between him and Jermall Charlo. “We’re both under Al Haymon, and that makes things a lot easier to make a deal to negotiate when we’re with the same person versus going out with somebody else.

“So in due time, I think that fight will happen. I view him [Charlo] as a good fighter, he’s very strong, young, and I think our fight will make for a great battle. He may not have the deep-seated amateur experience as a [Daniel] Jacobs or a Golovkin has. Still, he has enough professional experience at this point to where he’s on their level.

I don’t really know,” said Derevyanchenko when asked his prediction on a fight between him and Jermall Charlo. “It’s hard to predict, but I can say is it will be as entertaining as the Golovkin fight,” Derevyanchenko said.

It’s safe to say that Derevyanchenko will probably need to wait until the WBC orders Jermall Charlo to fight him before he gets a title shot.

Even when Charlo held the IBF junior middleweight title, he wasn’t the most significant risk-taker when making title defenses. As the WBC middleweight champion, Charlo hasn’t shown much of an inclination to take on the elite level fighters.

Derevyanchenko needs to face the best available opponent he can after the lockdown ends. Someone like Jaime Munguia, Liam Williams, Maciej Sulecki, or Esquivia Falcao would be good options for Derevyanchenko.

“I don’t know if my number one achievement is the money, but it’s up there.,” said Derevyanchenko on his goal for the sport. “What I also want to do like a lot of fighters is to become a world champion.

Sergiy will eventually get fights against Eubank Jr., Charlo, Canelo, and possibly Golovkin if he keeps winning long enough. Of those fighters, Golovkin is the least likely to face Derevyanchenko again because he already found out the hard way that he’s a wrong style match-up for him.