By Jim Maltzman: Ryan Garcia says he’s probably not going to be fighting on July 4 as he originally planned. He doesn’t elaborate on what the problem is that’s keeping him from fighting, but he’s saying its bulls*** that he doesn’t want to discuss.

The way Ryan is talking, it’s unclear whether he’s upset with his promoters at Golden Boy Promotions or the situation with the pandemic. There’s not much ‘Kingry’ Ryan, or his promoters can do about trying to find a suitable opponent for him to fight on short notice.

Getting an opponent for Ryan would have been difficult

With the July 4 fight expected to have taken place behind closed doors, it would have been a lot of heavy lifting by Golden Boy to make that a reality. In the absence of news about the July 4 fight from Golden Boy in the last month, it seemed apparent that Ryan wouldn’t be fighting.

There was a lot of fan interest in seeing the 21-year-old Ryan fight on that date, even after it was revealed that Jorge Linares wouldn’t be able to take the fight.

Hector Tanajara and Mercito Gesta were the two names that had been in the running for the unbeaten lightweight contender Ryan Garcia (20-0, 17 KOs), to fight on July 4.

“Now that you can’t get the easy opponents you usually get you make some bulls**** excuses? I’ve been ready. Sign the contract and let’s go July 4th #TeamTanajara @GoldenBoyBoxing twitter.com/kingryang/stat,” said Hector Tanajara on Twitter.

“Anxiety been intense lately. They only could hold you back so long until they can’t Folded hands👊🏼 I don’t know about my fight July 4th guys, won’t happen most likely and it’s sad bc I want to fight so bad but it just a lot of bulls*** I’m not going to get into right now,” said Ryan Garcia on his Twitter.

“I’ll just be ready when it does happen. I’ll be back when you get your s*** together,” said Ryan.

Golden Boy Promotions were likely unable to make a deal to get Gesta or Tanajara to agree to take the Garcia fight with the money that was offered. With the news that Golden Boy is looking for a cheap option for Canelo Alvarez’s next fight in September, it would come as a shock if they failed to find an opponent willing to agree to the money offered for a battle with Ryan Garcia.

The popularity of Ryan has reached the stage where fighters want to get paid well to fight him. For that reason, you’re not going to get someone agreeing to fight him on short notice or chicken feed.

If there were a gate for Ryan’s next fight, there would be extra money for opponents to be found for him. Right now, it’s got to be tough for Golden Boy because they’ve got to pay Ryan his money and then put together the undercard. After all that, there’s probably not much left over to sign a good fighter for Ryan Garcia to fight.

Garcia putting himself in the same class as Tank Davis

Garcia is a good puncher, but he’s not considered to be on the same level as Tank Davis. Ryan has excellent hand speed, but Tank even matches him in that area as well. That’s why Ryan must learn as much as he can from his new trainer Eddy Reynoso. He’s not going to be able to count on his power or his speed winning fights when he gets in there with guys like Tank Davis, Vasily Lomachenko, Devin Haney, and Teofimo Lopez.

There’s a lot of things that Reynoso can fix with Ryan’s game that will help him one day be able to compete against guys like Tank, but he’s fooling himself if he views himself as being on the same level as him in the power department. 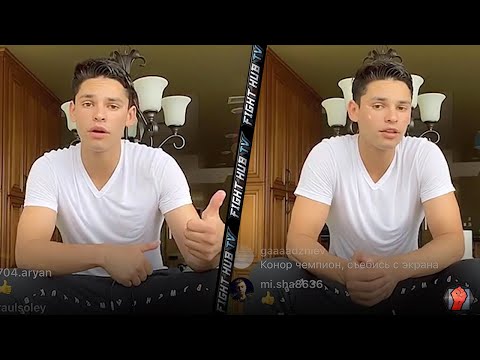 Hughie Fury: “Dave Allen Keeps Mentioning My Name, Let’s Get It On!” »