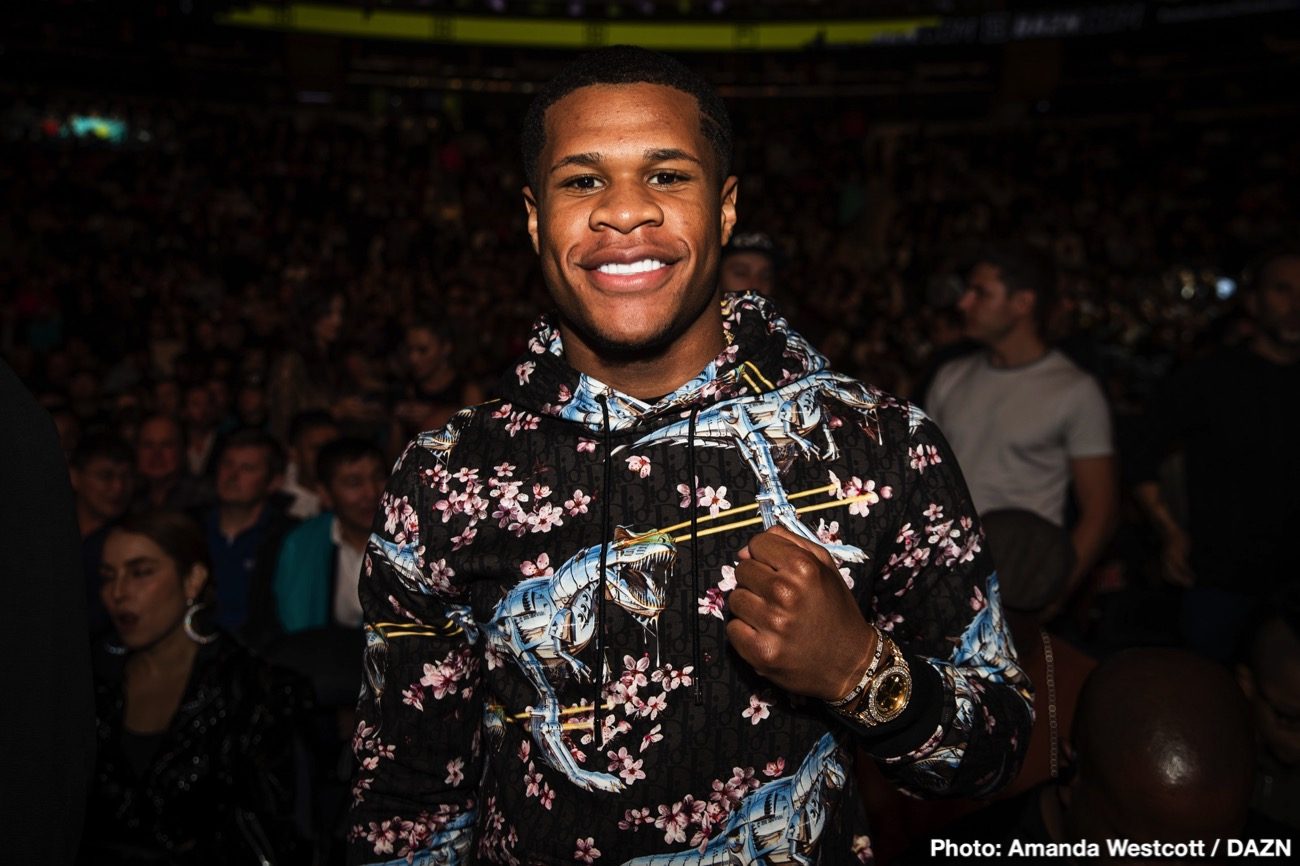 By Dan Ambrose: The high demand from fans for the Ryan Garcia vs. Devin Haney fight has the Floyd Mayweather Jr protegee ‘The Dream’ Haney ready to make that fight happen right now rather than waiting for two or three years to let it marinate.

Haney (24-0, 15 KOs) sees no point in waiting any further for the clash against King Ryan (20-0, 17 KOs). Devin’s promoter Eddie Hearn of Matchroom Boxing, says he wants to make the fight with the young 21-year-old Garcia, but it’s one that may not be possible.

With the absence of crowds for live events in the United States, the Haney and Garcia should wait until the fans are allowed back in to watch sporting events.

Garcia-Haney wouldn’t sell outside of the United States because neither fighter has a large enough following outside of the States yet. That’ll change in the future if the two guys can keep winning, but for now, they’re going to have to wait until crowds can return.

It’s better for Haney, 22, to wait longer before he faces Garcia because he’s not able to punch with enough power at the pro level. Although Haney beat once in the amateur ranks, it’s a different game in the professional classes. Haney is working with superstar Floyd Mayweather Jr, but that might not help him increase his power.

“It’s just showing the world how big a fight with me and Ryan [Garcia] would be if it happened,” said Haney on social media to WBC University for “WBC Talks. “It could still happen now, and I won’t have to wait much longer.

“That would be a dream. I’ve talked to my promoter Eddie Hearn about fighting all over. He’s done fights in Saudi Arabia. I told him that I would be 100% on board to travel and fight all over the world,” said Haney.

Ryan Garcia wants to fight WBA lightweight champion Gervonta ‘Tank’ Davis (23-0, 22 KOs) more than he does Haney. The reason for that is simple. Davis has a lot of talent, and it would raise Ryan’s status if he beats him.

Haney didn’t look so great in his last fight against Alfredo Santiago last November in winning a 12 round decision. While Ryan is knocking everyone out in the first round, Haney is struggling to beat no-name guys like Santiago. That should tell you that Haney needs a lot of work in his power game before he takes on a talented fighter like Ryan.

“I think Floyd has got so much knowledge and so much to give, and he’s not letting what he knows and what he’s been taught die,” said Andre Ward to Fighthype on Floyd Mayweather Jr training Devin Haney.

“He’s passing it on, and that’s priceless. You know what I would give to have Floyd Mayweather in the gym with me holding the mitts when I was coming up. That’s a major blessing, man.

“I don’t know if he’s going to stick with it. Losing Rog, and his dad is getting older. He probably wants to keep the legacy alive, and I respect that,” said Ward.

Unless Haney is going to do more than working out on mitts with Mayweather, it’s not likely he’s going to get a lot out of it. Like most fighters, Haney learns from observation, and the way to do that is to study film of great warriors.

If Haney wants to learn from Mayweather, he’s better off studying his old fights. But any fighters can do that, including Ryan Garcia. 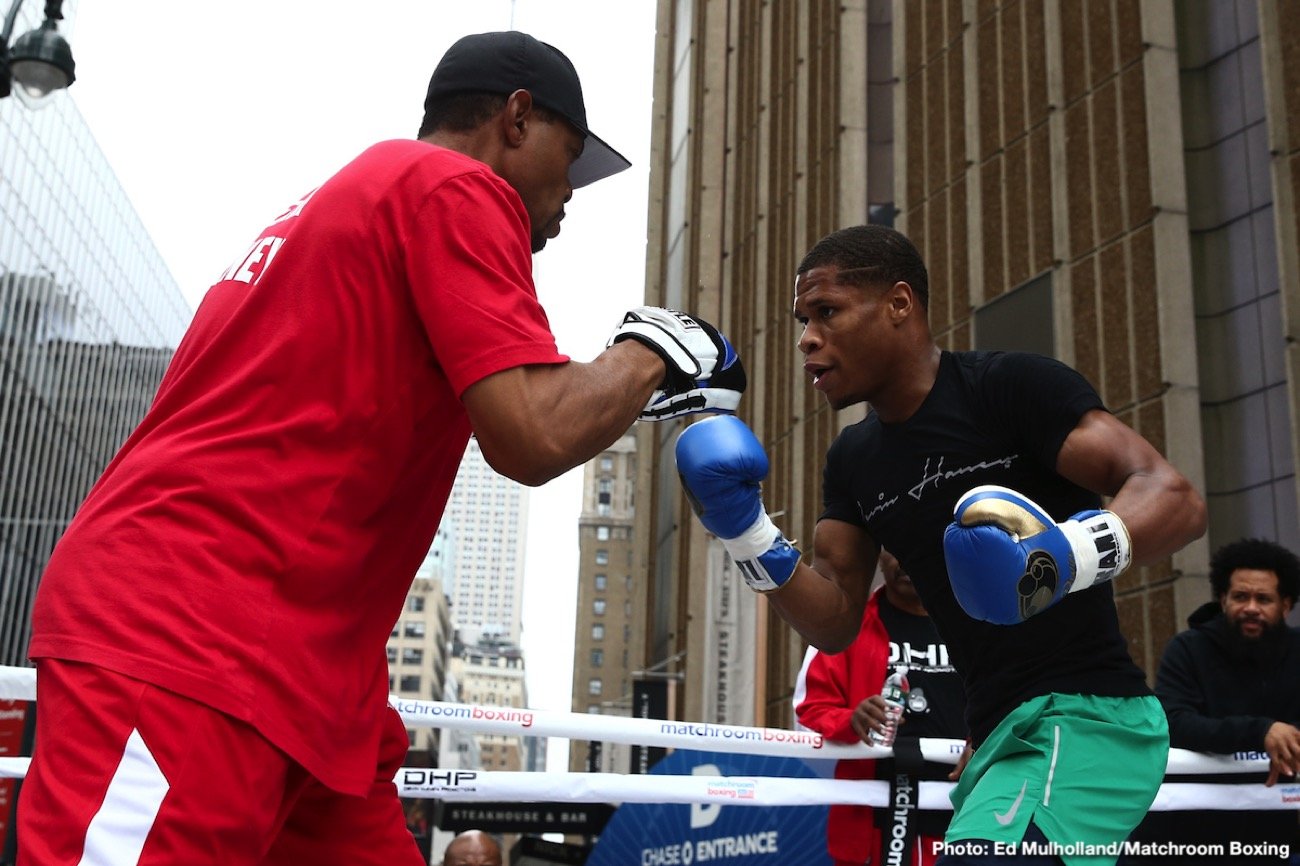 “Teofimo Lopez and Vasiliy Lomachenko,” said Ward when asked which fights he wants to see the most. “I want to see that one real bad. Is it a changing of the guard, or do the veteran and the old lion hold off the young charge?

“Is it too early, or is it time? I can’t wait for that one. Teofimo knows what this fight means and what it will mean if he wins, and he knows the type of guy he’s facing.

“Lomachenko is a two-time Olympic gold medalist and multi-division world champion by not taking guys seriously. So I think both guys are doing what they got to do, and I think it’s going to show when they actually fight,” said Andre Ward.

Top Rank still hasn’t put together the Lomachenko vs. Teofimo fight, but it’s expected to take place in November or December. When it does take place, it’s going to be interesting to see how the unbeaten IBF lightweight champion Teofimo Lopez (15-0, 12 KOs) deals with WBA/WBC/WBO champion Lomachenko (14-1, 10 KOs).

We could see the passing of the torch from the old lion Lomachenko, who at 32, is starting to show signs of age.

Fighters have to have to make choices

“You’ve got guys that are making multi-million dollars,” said Ward. “They don’t have pressure to fight anybody,” said Ward on the pressures that fighters will have during the pandemic.

“In this day and age, legacy and I’m not saying that this is the case with them, but generally speaking, legacy is not always the first thing on guy’s mind. So the urgency to prove that they’re the best may not be there.

“The money is good. So it’s tough to say with the champions. I’m a pro fighter, and I believe that a fighter should get what they deserve. It’s going to be interesting to see the chess game and the chess match on how certain champions play the game.

“Some are not going to budge, or they’re not going to move unless they get their minimum or whatever they feel like they’re worth. And some are going to say, ‘I’m not going to get this but let me get what I can get and stay busy. So when the economics of boxing returns, I didn’t miss a beat.

“In fact, I’m sharper than most. That’s what I’m looking to see, but I’m not in the position to tell guys what they should or shouldn’t do. I’d probably opt for option number two, which is let’s get as much as I can get.

We’re already starting to see signs of the popular fighters resisting talking the reduced money being offered to them during the pandemic. 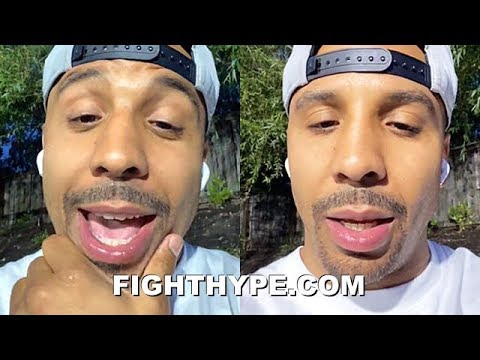 
« Golovkin the better option for Pacquiao than Crawford

Teofimo Lopez looking like a 154-pounder training for Lomachenko »