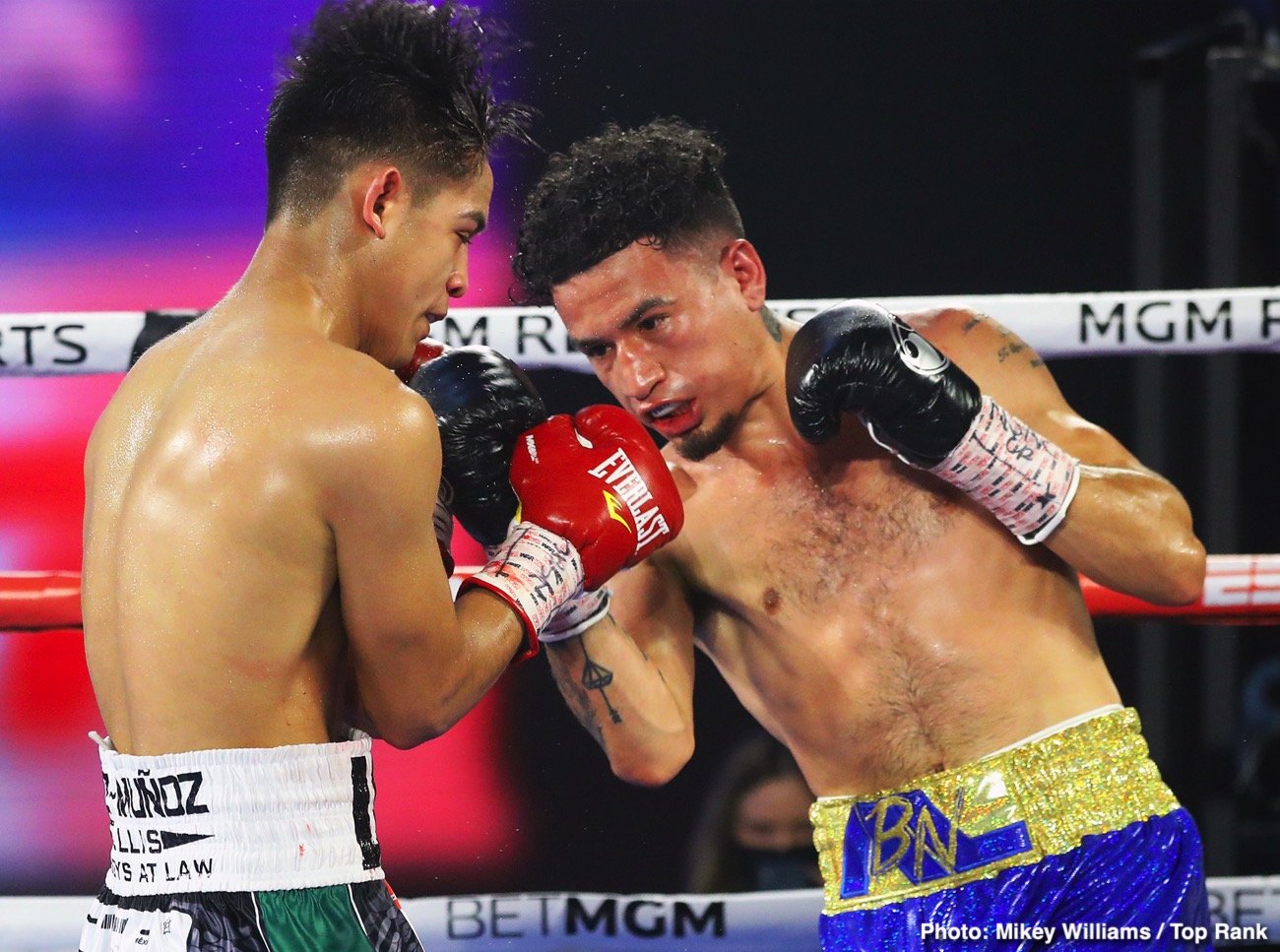 By George Goddiess: ESPN delivered big time in its second boxing card following the COVID-19 outbreak that put our sport on hold for two months. Adam Lopez and Luis Coria put on a tremendous fight to open the night at MGM Grand in Las Vegas.

In a fight that could have gone either way, both men poured everything they had into the fight and went the full ten rounds. Lopez was awarded the majority decision after Dave Moretti scored the fight 95-95 and was overruled by Tim Cheatham and Steve Weisfeld, who had Lopez ahead 96-94.

The fight was very evenly matched and had some nice ebb and flow moments where the momentum seemed to exchange back and forth.

The opening round saw both men come out jabbing, but Coria took the lead early with a very busy first round. He trapped Lopez on the ropes and began to go to work with his power punches. Lopez outmaneuvered Coria and briefly backed him up to the ropes and got off with combinations.

Coria was very effective with a tight left hook that was present in the opening two rounds. Coria mixed up combinations throwing double left hooks and when inside going left hook right uppercut.

The second round opened up with a very aggressive Coria throwing with Lopez’s jab. Lopez, in this round, focused on using different pivots to the right and to the left to create angles while the two fought shoulder to shoulder. Lopez was doing whatever he could to slow down the aggressive pressure of Coria, who kept coming in with hooks and uppercuts.

Lopez tried to answer twice with left hooks to the body, but they sailed low, the second got a warning from referee Kenny Bayless. With about twenty seconds left to go, Coria scored with two solid right crosses that snapped back the head of Lopez.

The third round saw a significant change in pace and distance as Lopez was able to fight more on his terms. Lopez was able to score with his jab and begin to limit the effectiveness of Coria’s aggression. Lopez started to have success setting up his right uppercut as Coria continued to fall in straight ahead.

Coria began to look sluggish as his hands lowered just a little and allowed Lopez to land more effectively. Lopez also started to time Coria’s left hook and began to duck underneath the shot. Round four was a jabbing exhibition from Adam Lopez as he doubled his jab and went double jab right hand.

Coria continued to keep his hands at home as Lopez began to predict his shots and make him miss more. Lopez would slip underneath the jab and circle out to his right and circle out the left and escape the left hook. Momentum had started to swing heavily in Lopez’s favor as his adjustments seemed to take away Coria’s strengths and eat into the lead he had built up in the first two rounds.

The fifth round was another good round for Lopez, who spent some time as a southpaw. His first time switching stances saw him land three one-two combinations in succession that saw Coria backed up and had his head snap back.

The second stance switch saw more of a feint than an attack. There was a small clash of heads near the end of the round, but no cut resulted from it. After losing three straight rounds, Coria began to score a little more in round six in what was a comeback round for him as he won it on Moretti and Cheatham’s scorecards, respectively.

Round seven was another very competitive round. Lopez continued to jab away at Coria, who was starting to step up his pace again. Coria landed a solid right hand near the end of the round and clapped his gloves together as his confidence began to grow a little more.

Lopez’s trainer Buddy McGirt could be heard screaming from the corner in frustration at Lopez letting his opponent outwork him and get back into the fight. He was constantly ordering Adam to jab and to turn his opponent. Round eight was a very strong round for Coria, who began to double his left hook again.

NEWS:   Babic begging Molina to beat him on Saturday

Lopez appeared to be wearing down as the pace was set very high early on, and he coped with Coria with a lot of movement that was certainly taxing to maintain. Lopez also began to develop visible swelling around both of his eyes though it was nothing threatening to stop the fight.

The final two rounds were toe to toe and very grueling as both men fought to the finish trying to secure the decision they both had fought so hard to earn. Coria landed a very hard uppercut in the round that snapped Lopez’s head back.

Near the end of the round, Lopez landed a solid right cross that knocked Coria off-balance and more than likely swayed the judges in what had been a tightly contested round. The final round was a very exciting finish as both men threw combinations and met each other in close despite the fatigue that had set in and the damage accumulated in the previous nine rounds.

At the end of the fight, Lopez was awarded the majority decision in a fight that entertained anyone who tuned in. Lopez fought bravely against Oscar Valdez last November and put on a very exciting performance tonight. In his post-fight interview, he said that tonight was possibly his most difficult fight of his career and that Coria found some holes in his game.

He hopes to follow up with a ranked opponent in his return the ring. For Luis Coria, he is twenty-one-years-old and has nothing to be ashamed of. Hopefully, Robert Garcia and his camp can learn from this fight and make adjustments defensively as he was too easy of a target for the Lopez jab. No one can question his heart and conditioning, but it will take more than that to move up to the next level. 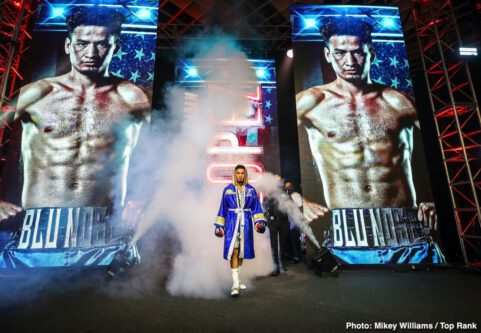 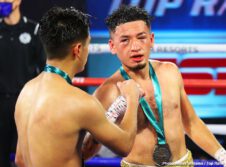 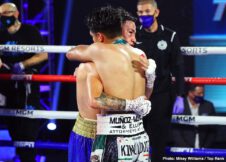 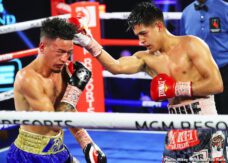 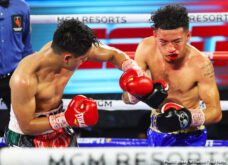 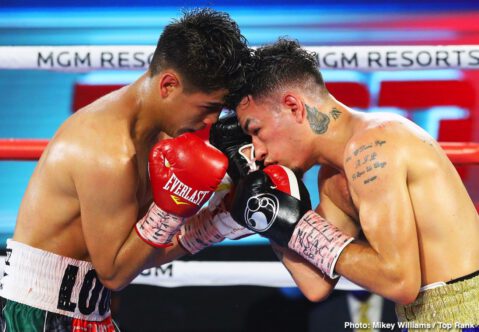 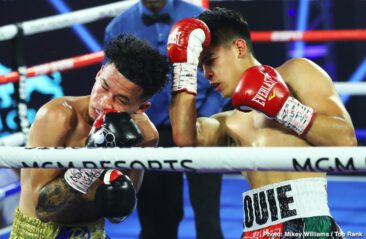 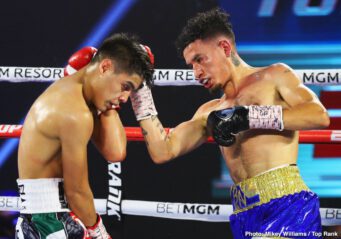 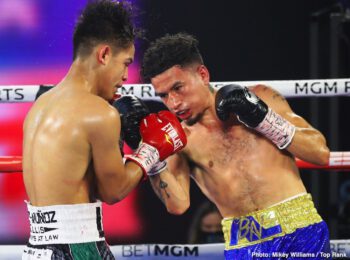 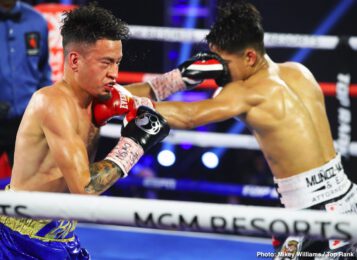 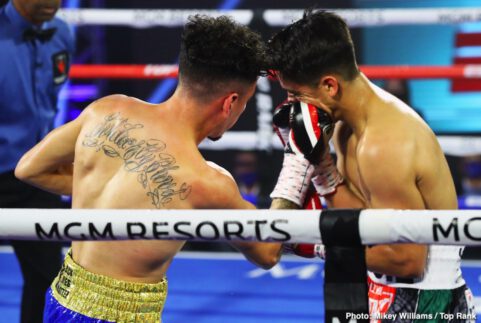 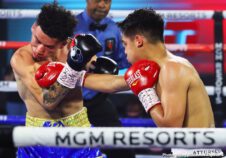 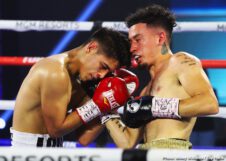 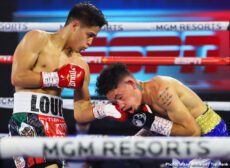 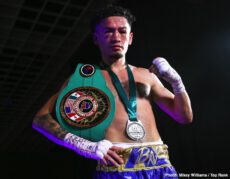 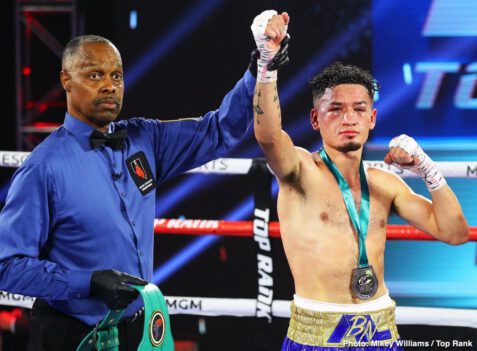 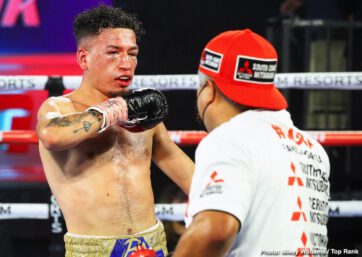 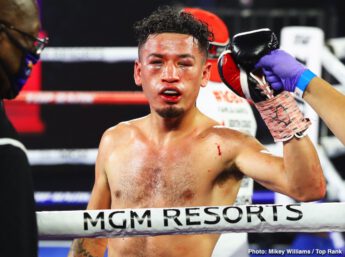 
« Hearn: Dillian Whyte MUST get title shot by February 2021