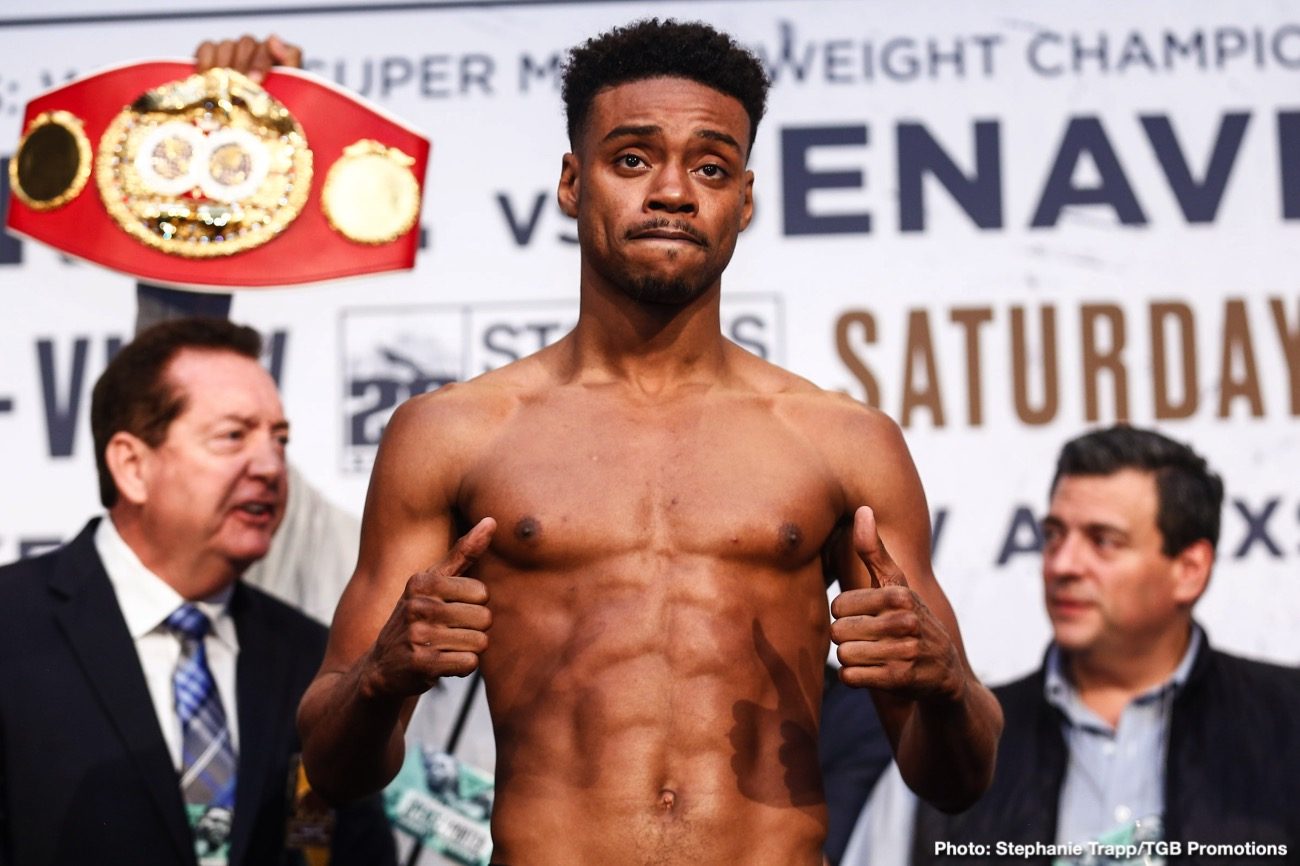 By Max Seitelman: Bob Arum is amused that Errol Spence Jr. says he wants to fight Danny Garcia, Manny Pacquiao, and Terence Crawford. What Arum wants to know is who is going to pay for the huge guarantees that Spence and those fighters will want for those fights to happen?

Arum says that if Spence and Garcia want $8-9 million for their fight, who will pay for that? Neither fighter has proven themselves to be a pay-per-view draw as of yet. Further, the money won’t be there for that fight to cover the costs.

Is Spence a PPV fighter?

IBF/WBC welterweight champion Spence (26-0, 21 KOs) said on Monday in an interview with Brian Custer on his ‘Last Stand Podcast’ that his next fight will be on pay-per-view.

“I think my next fight will be on pay-per-view again,” said Spence. “The more realistic [next opponent] is probably Danny Garcia or Pacquiao.”

Pacquiao vs. Spence would bring in a decent amount of pay-per-view buys, but will it turn a profit? With this economy, it might not. Pacquiao needs someone like Floyd Mayweather Jr. or Canelo Alvarez to attract a lot of buys right now, and Spence isn’t a big enough name yet.

Spence vs. Garcia isn’t a fight that would likely sell a lot of pay-per-view buys right now, and it might not have done well in the past as well. If the promoters for that event pay Spence and Danny a ton of money in guaranteed purses, it could be a disaster.

“Errol Spence is a very good fighter, and he’s talking without regard about who’s going to pay for it,” said Arum to IFL TV in reacting to Spence being interested in fighting Crawford, Danny Garcia, and Pacquiao. “In other words, if he fights Danny Garcia, he’s going to want a real truckload of money, and Garcia wants to get paid a lot of money.

“Now, who’s going to put up the money? You say, ‘Al Haymon.’ Well, if Haymon wants to be a masochist, he’ll do that fight because he’ll end up losing a ton of money, and that’s got to stop. I’m happy to do a Spence-Crawford, but I know what each guy is demanding.

“I would say if you think you’re worth that, take a modest guarantee, each of you, and fight for the upside. That’s what Muhammad Ali used to do. I mean, give me a break,” said Arum.

Bob brings up a good point. Who is going to pay these fighters the money they’re looking for to fight? It’s nice that Spence wants to fight Danny Garcia, Crawford, and Pacquiao, but if the payment isn’t there to cover the considerable asking price if these fighters, then it’s not going to work.

Spence’s comment about wanting to fight Danny Garcia on pay-per-view sounds like he’s in dreamland. Maybe in the old economy before the pandemic, an idea like that would have had legs, but certainly not now.

If there’s a brave enough promoter that is willing to pay Garcia and Spence the colossal money they’d be looking to go to fight each other, then more power to them. It doesn’t seem likely.

Spence-Garcia isn’t a pay-per-view worthy fight, and the bus that it’ll bring in right now will likely be small. Garcia, 31, is a good fighter, but he’s not a pay-per-view guy, and neither is Spence. In Spence’s PPV fight with Mikey Garcia in 2019, he got away with that due to Mikey’s popularity rather than his own.

40 million people are out of work

“Why should the promoter take this crazy risk of paying each guy $8 million or $9 million?” said Arum on fighters like Spence fighting. “Where is it coming from? I mean, these fighters haven’t shown themselves to be huge pay-per-view draws. They just haven’t.

“If you’re dealing with a Canelo, said Arum. “He has a track record because of the Mexican-American fan base of doing big pay-per-view numbers, but these other guys don’t have a track record for that. And also, you have to take into consideration what the situation is.

“I mean, we have 40 million people in the United States out of work. Well, are people out of work going to buy the pay-per-view? Of course, not. People that bought pay-per-view in the past made parties in their homes, and they had ten people watching it.

“Well, not many people are going to want that many people into their homes now with the…still lurking around. So, everybody has got to come to their senses, and I think they will. But again, one thing at a time. You can’t make fights without figuring out how you’re going to pay for them,” said Arum.

It’s not the right time for Spence to be talking about wanting to fight the top names on pay-per-view. What Spence needs to do is get busy with his career, and try and increase his popularity slowly. The U.S economy needs to rebound, as right now it’s at the level of the 1930 ‘Great depression.’ You’re not going to sell pay-per-view events during this time. It’s just not going to happen unless it’s something significant like Canelo vs. Spence or Canelo-Crawford.