By Chris Williams: Jorge Linares is giving Teofimo Lopez a chance at beating Vasiliy Lomachenko for when the two meet up later this year in 2020 in their lightweight unification match.

Linares feels that the hard-hitting 22-year-old Teofimo only has power on his size as his only advantage. In contrast, Lomachenko has speed, technical skills, ring IQ, and his southpaw stance to win.

The former three-division world champion Linares knows first hand the kind of ability that IBF/WBA/WBO lightweight champion Lomachenko possesses, as he was knocked out by him precisely two years ago in a 10th round stoppage on May 12, 2018.

Linares states that he came up with a great fight strategy, which is why Lomachenko had so many problems against him. It looked more like the case of Linares being too highly skilled for Lomachenko to use his normal high-volume punch attack.

Lomachenko couldn’t use his normal fight strategy against Linares

Although Lomachenko attempted to machine-gun Linares with rapid-fire shots to get him to quit, it failed to work. Linares was able to land his shots when Lomachenko would stand in front of him. Lomachenko is an excellent fighter, but he’s not someone that will take two shots to land one of his own.

He’s not that kind of a guy. Lomachenko dislikes getting hit, and that’s why he couldn’t use the same fight strategy against Linares that he did in his wins over his previous eight opponents.

Lomachenko isn’t the same fighter he once was

“I think it’s a good fight,” said Jorge Linares to Fino Boxing on Teofimo Lopez vs. Vasiliy Lomachenko. “Lopez is a very tough opponent, and he has a punch, and Lomachenko is the best boxer in the world pound-for-pound, and he’s very fast.

“He’s quick, and he has amazing combinations and power, but Lomachenko isn’t the same Lomachenko from two years ago when I was fighting with him. So you could see that in his last fight with him.

“So we’ll see. But I’m still thinking that fight is a little bit of worry for Lomachenko. I think so, but still, he has a lot of opportunities,” said Linares in analyzing the Lomachenko vs. Teofimo fight.

Linares’ comment about the 32-year-old Lomachenko not being the same fighter he once was is what a lot of boxing fans have echoed. Be it age or the accumulation of wear and tear from a long amateur career, but whatever it is, Lomachenko has lost something from his game.

In Lomachenko’s fights against Linares, Jose Pedraza, and Luke Campbell, he was hit a lot more than normal. Lomachenko didn’t look like the same guy that had forced Guillermo Rigondeaux, Nicholas Walters, Jason Sosa, and Miguel Marriaga to quit.

Where Teofimo has a chance of winning this fight is if he can stay in there until the later rounds, he might wear Lomachenko down. If Teofimo is able to land the same amount of shots that Lomachenko’s last opponent Luke Campbell, then he’s got a shot at winning.

Lomachenko will use a lot of in and out movement. So, Teofimo will need to time him to have a chance of knocking him out or down. If you Lomachenko’s fights, he uses a lot of energy moving around needlessly to avoid exchanging, and style is hard.

“For me, if that fight happens, I think Lomachenko will win the fight,” said Linares in picking Loma over Teofimo. “I think so for the decision. Lomachenko is a southpaw, he’s fast, and he moves very quickly, and I think Lopez is not ready for that.

“I remember Lopez in the fight against the Japanse guy [Masayoshi Nakatani]. I think not the last fight, but another fight. Two fights before. So I think the fight is going to decision. He was so complicated with that Japanse guy [Nakatani].

“So, Lomachenko is more complicated than that guy, but we’ll see. He’ll [Teofimo] need to make a good plan. Like me, when I was fighting with Lomachenko. If Lopez makes a good strategy against Lomachenko, then maybe he can get the chance, but we’ll see,” said Linares.

It makes sense for Linares to pick Lomachenko because he’s been so invincible during his pro career. Further, it was only two fights ago that Teofimo struggled to beat the crafty Masayoshi Nakatani in 2018.

Lomachenko is going to be a lot harder Teofimo to deal with than Nakatani, and that’s why it’s going to take a lot of patience and a great game plan for Lopez to win. Teofimo can’t afford to get down on himself if he’s getting out-boxed by Lomachenko, because that’s a given.

What Lomachenko will be attempting to do is clown Teofimo by doing a lot of showboating to get him mentally upset to the point where he’s making mistake,s and he may end up quitting.

It would be easier for Teofimo if he were a pressure fighter and a body puncher like Orlando Salido. In Salido’s 12 round split decision win over Lomachenko in March 2013, he pressured him and attacked the body.

Lopez has to fight smart to win

“Maybe [Teofimo can drop Lomachenko], but boxing is not only the power,” said Linares. “It’s here [in the head] and the speed too, you know? So, Lomachenko has that. Lopez only has power, and that’s it.

“I don’t have that power like Lopez, but I’m quick, I’m fast, and I’m very [smart], and I make a good plan, and I make a good strategy. That’s why Lomachenko never did the same boxing as he did with everyone with me in that fight and in that moment.

Teofimo will have a good strategy, but it might not work if he’s focusing all his energy at knocking out Lomachenko with a headshot.

In Teofimo’s last fight, he hurt IBF champion Richard Commey with a big punch to the head last December. If Teofimo tries that same strategy to headhunt the entire fight, it’s hard for him to land. Teofimo needs to mix his punches up from the body to the head to have a shot at winning. 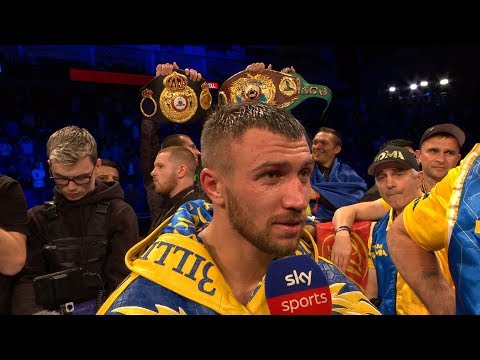 
« Pacquiao or Mayweather – Who had the better career?