Mikey Garcia: The door is open for Manny Pacquiao fight 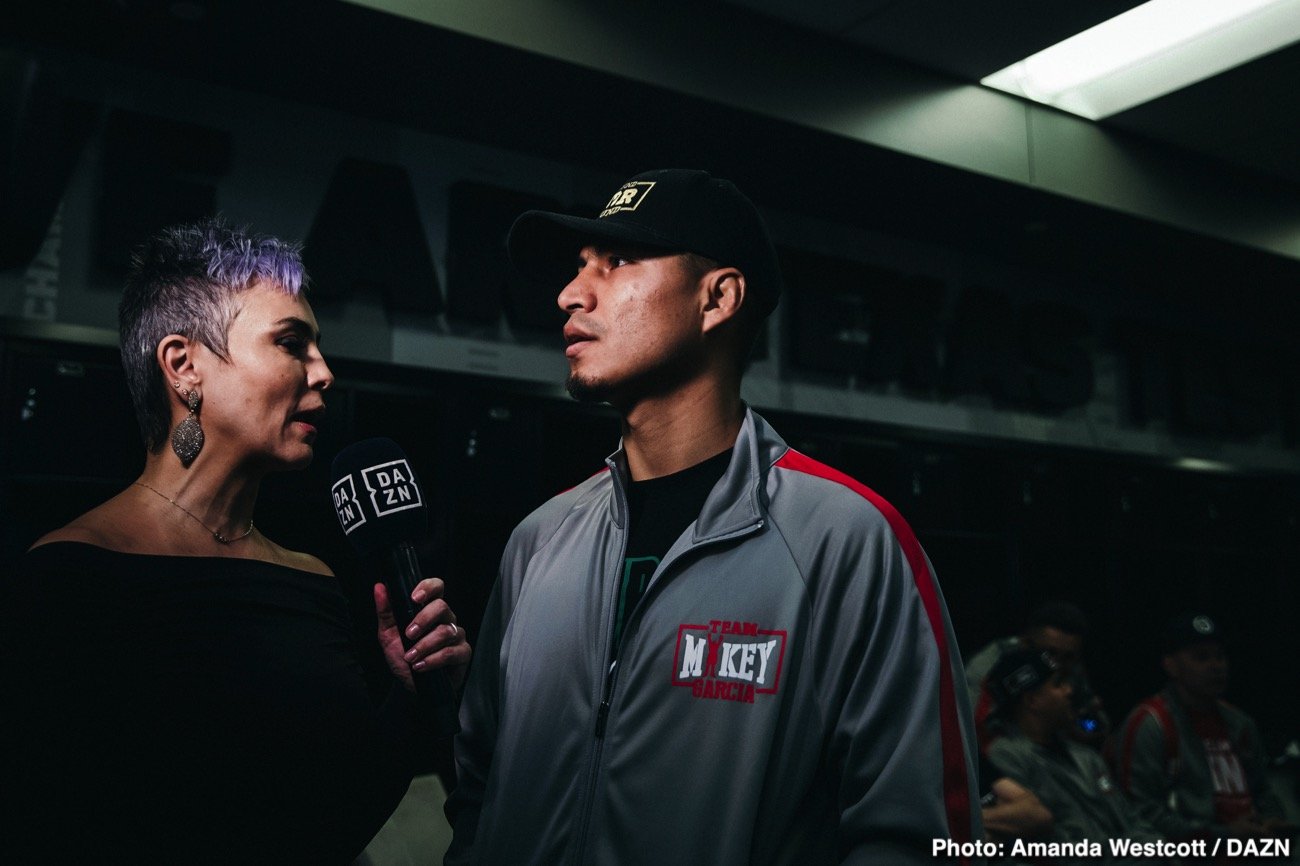 By Dan Ambrose: Mikey Garcia (40-1, 30 KOs) says he’s going to continue to pursue a fight between him and superstar Manny Pacquiao after the lockdown. Mikey feels that he’s got an excellent chance of getting the match against WBA welterweight champion Pacquiao (62-7-2, 39 KOs), as he’s talked to them and there’s interest.

Mikey admits that Pacquiao, 41, has other options besides him, but he still feels confident that he’ll be the one that gets the fight. In Mikey’s last bout, he defeated former two-division world champion Jessie Vargas by a 12 round unanimous decision last February.

It was only the second fight for the 32-year-old former four-division world champion, Mikey, at 147 since he moved up in weight in 2019. The performance from Mikey was considerably improved from what we saw in his first bout at welterweight against IBF/WBC 147-pound champion Errol Spence Jr.  That was a mismatch with Spence beating Mikey easily.

Rather than facing Vargas, Mikey should have fought a contender like Yordenis Ugas or Vergil Ortiz Jr. to earn a title shot.

‘That’s the fight that I would pursue the most,” said Mikey Garcia to Matchroom Boxing on a fight with Manny Pacquiao. “That would be a terrific fight, first of all, and exciting fight. Pacquiao is a living legend, he comes to fight, and he’s the greatest.

“I would definitely pursue a fight. That would just add to my legacy to be able to get in the ring and compete with a man himself. Before my fight with Jessie [Vargas], we were already having discussions and conversations with Team Pacquiao about a fight. They were on board, and they liked the idea,” said Mikey.

Fans have heard Mikey loud and clear that he wants the Pacquiao fight, considering that he’s been talking about it since 2019. When Mikey moved up to 147, he was already talking about wanting to fight Manny.

Even after Spence beat Mikey, he was still talking about wanting a title shot against Pacquiao. What made Mikey look bad though, is that he hadn’t come back from the loss to Spence to redeem himself, but he still wanted a crack at Pacquiao.

People would like it better if Mikey beat a top contender to earn a fight with Pacquiao instead of having the opportunity given to him without him earning it. Vargas was a good fighter years ago, but he’s done nothing since his loss to Pacquiao in 2016. After Vargas’ one-sided loss to Pacquiao, he had two draws against Thomas Dulorme and Adrien Broner and beat 40-year-old former super featherweight Humberto Soto and journeyman Aaron Herrera.

Soto was good higher in his prime at 130, but he was old and undersized in facing Vargas in their catchweight fight at 151 pounds in April 2019.

“Obviously, they have other options as well, but they did like the idea enough at least to entertain the possibility of a fight between us,” said Garcia on a fight between him and Pacquiao. “Unfortunately, with all this stuff going around, we had to slow down. But if things clear up, I think that would be a great fight, you know?

“Plus, it had already been brought up years ago as a maybe, possible future fight between Manny and myself,” Garcia said.”I think the door is probably better now and open more than ever before. At least now that I’m fighting at welterweight, I feel better,” said Mikey.

Most boxing fans believed that Mikey is the frontrunner for Pacquiao’s next fight. The other guy rumored to be under consideration for Manny’s next fight is Danny Garcia. However, Danny has a shot at getting a title shot against Spence. It’ll be up to Pacquiao. If he wants Danny, then he’ll get him, but it’s also possible he’ll pick Mikey.

Some boxing fans take issue with Mikey getting another title shot after his loss to Spence. Mikey has only fought once since his loss to IBF/WBC welterweight champion Spence, and that was against Vargas. The issue that people have with Mikey’s fight with Vargas is he was facing a guy that wasn’t ranked in the top 15 by any of the sanctioning bodies at 147.

It’s hard to justify that Mikey rates another world title shot at welterweight, given that his win over Vargas was against a second-tier fighter. Typically, a fighter needs to beat a contender at least after they suffer a loss and is given another title shot. Mikey hasn’t done that. 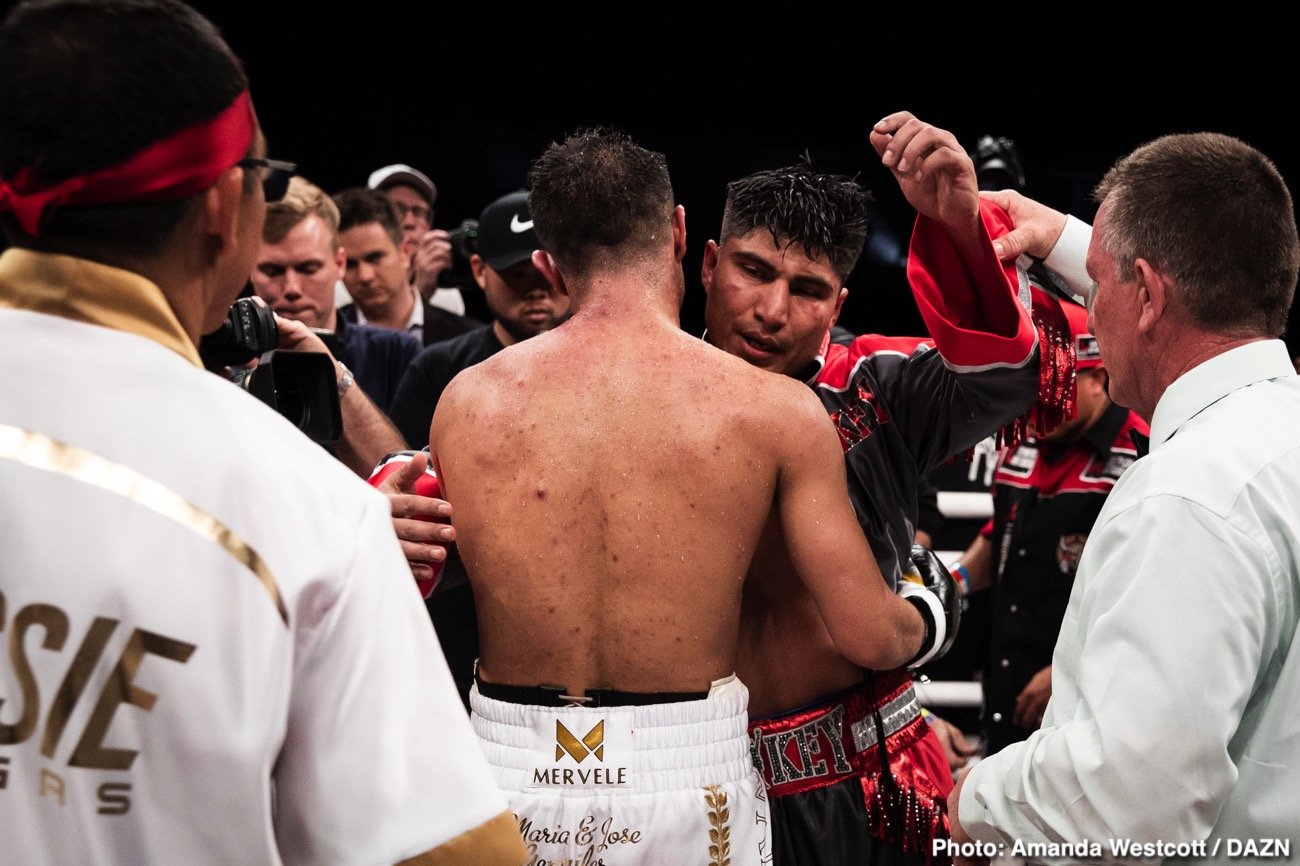 “I think that at least lets me get in the door and get a fight with Manny,” said Mikey. “So, my brother and my dad, they like that idea [of Mikey fighting Pacquiao].

“Manny isn’t a big natural welterweight like some of the other guys. So that at least gives me a size-wise, more competitive closeness compared to the other guys. But I think that’s a great matchup,” said Mikey.

Pacquiao, 5’6″, is roughly the same height as Mikey, but he’s faster, throws more punches, and is an explosive puncher. For Mikey to have a shot at beating Manny, he would need to catch him with a big shot that hurt his.

The chances are slim that Mikey will be able to outwork a fighter like Pacquiao, who is capable of throwing 1,000 punches in a 12 round fight. Mikey has always been economical with his output. That hasn’t changed as he’s moved up in weight to 147.

To Mikey’s credit, he knocked Vargas down in the fifth and got the better of him in the sixth and seventh. However, from round eight through twelve, Vargas dominated the action. Additionally, Vargas was a lot busier than Mikey in rounds one through four.

When you add all the rounds up in which Vargas outworked Mikey, he appeared to do enough just to edge it. But the judges didn’t give Vargas credit for landing more shots in most of the rounds. Mikey cannot afford to fight like that against Pacquiao because he’ll lose for sure if he doesn’t let his hands go.