Holyfield back in training at 57, looks SLOW compared to Tyson 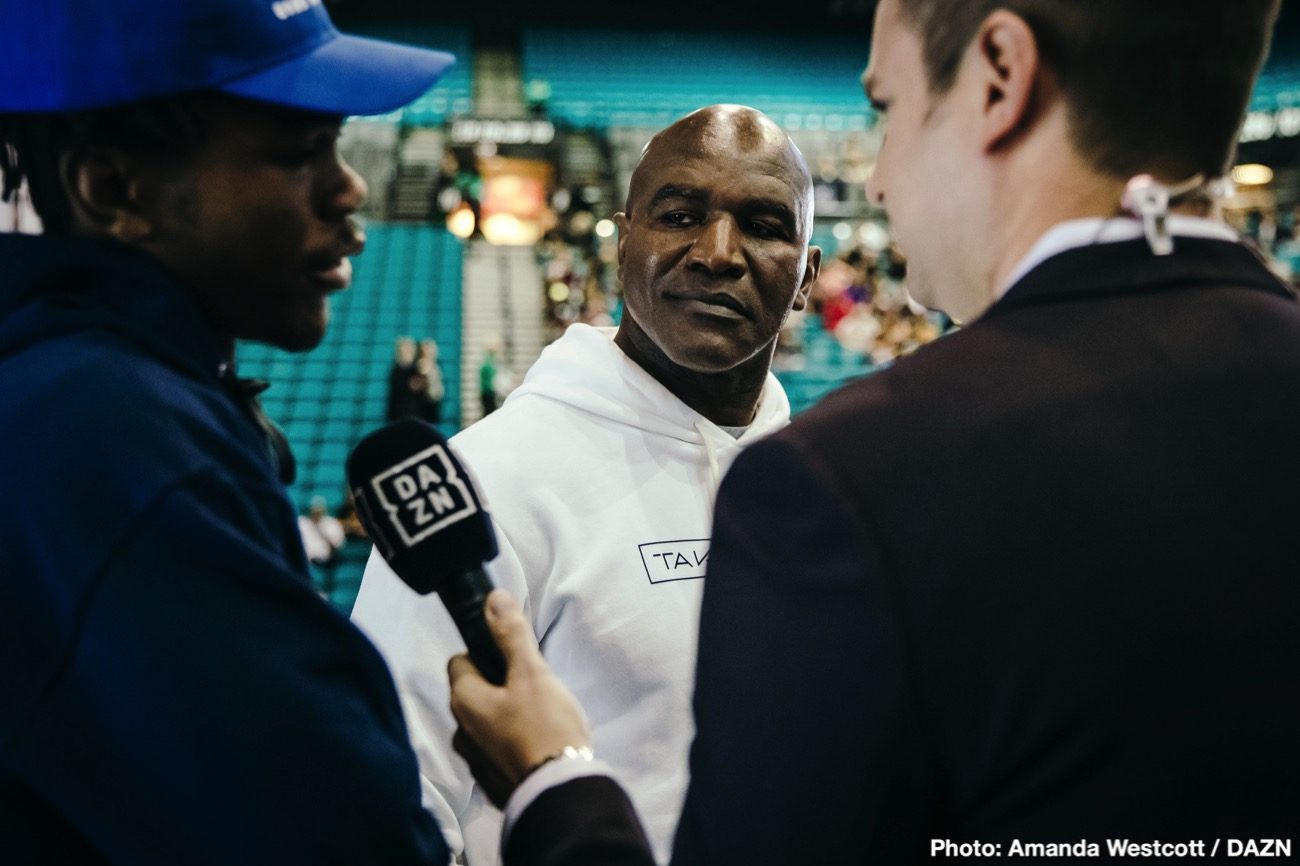 By Matt Lieberman: Evander Holyfield has started training to prepare for his exhibition matches, and he’s looking glacially SLOW in comparison to 53-year-old Mike Tyson. Holyfield estimates that he’s 60% of what he once was, but even that might be a stretch.

He looks more like he’s functioning at roughly 25%, and that’s not going to be good enough for Holyfield if he shares the ring with Tyson.

It’s quite understandable why the 57-year-old Holyfield (44-10-2, 29 KOs) has his speed and muscle. He hasn’t fought since 2011, and he looked horrible back then in laboring to beat Brian Nielsen by a 10th round knockout.

If Holyfield and Tyson fight right now, you’d have to give ‘Iron Mike’ a MONSTROUS edge in winning by knockout.

Although Holyfield twice beat Tyson in the mid-1990s, that was 25-years-ago, and a lot has changed with ‘The Real Deal.’ He’s not kept it together physically nearly as well as Tyson, who still has impressive hand speed and power at 53. In their rematch in 1997, Tyson was disqualified for biting off a portion of Holyfield’s right ear.

Holyfield back in training

“60% Right here. Who wants to see 70? I’ve been doing this my whole life🥊💪🏿#justwarmingup,” said Holyfield on his Twitter.

“If we can work something out that works for everybody, then it’s a win-win-win,” said Holyfield to Sky Sports News on a fight between him and Tyson.

If Holyfield is going to come back against Tyson, he’s going to need to improve on his hand speed. He’s too slow right now to hang with Tyson with the way he’s looking.

With boxing being at a stop because of the pandemic, it’s resulted in several retired former world champions talking about coming back. Besides Holyfield and Tyson, you’ve got these fighters potentially returning to the ring for exhibition matches:

Former heavyweight champion Lennox Lewis revealed on social media that he’s back in training too, although he’s not saying he’s coming back. That would be exciting if the 54-year-old Lewis returned to the ring for an exhibition match.

I’ve been training lately too. 😉

For Holyfield’s sake, he should lower his sights towards someone with less ability and punching power than Tyson because he could get embarrassed and potentially hurt against him. There’s no word yet whether headgear and l20-oz sparring gloves will be used for the exhibition matches. If they use the standard 10-oz gloves, it could end badly for Holyfield with Tyson hitting him with those on.