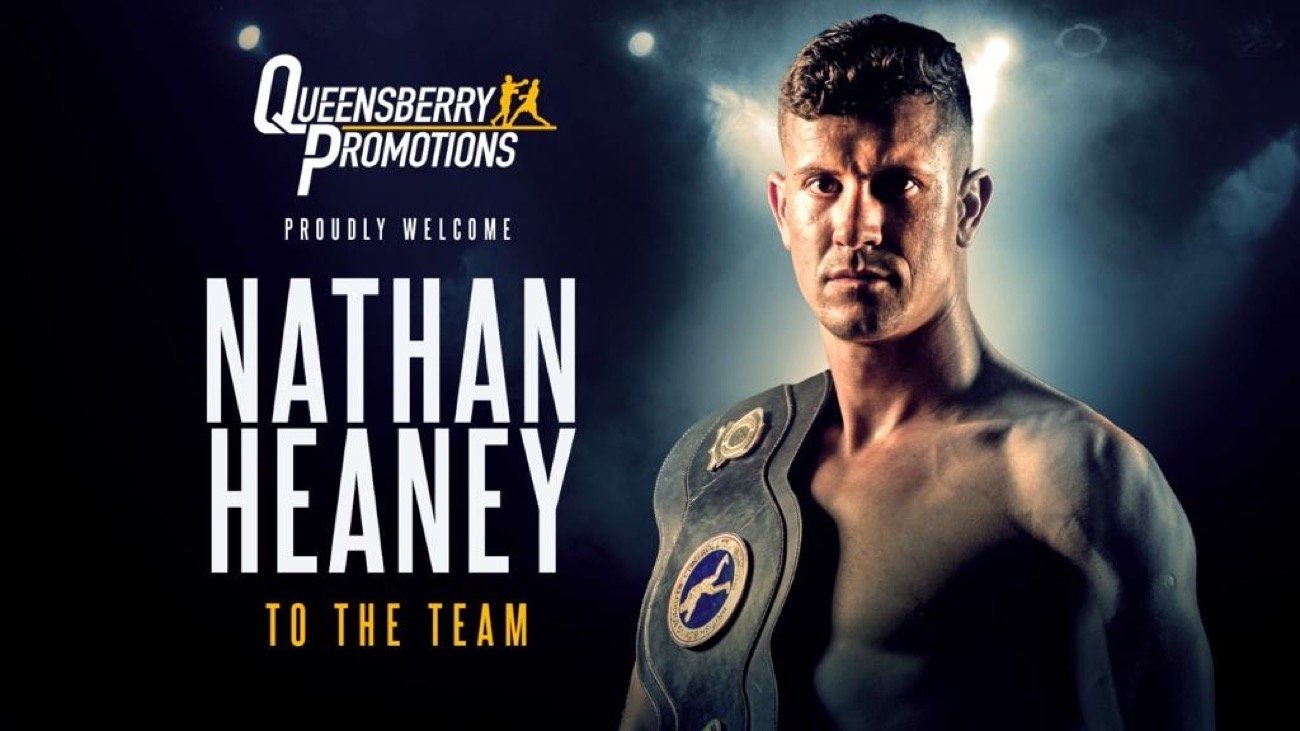 Known as ‘Hitman’, the 10-0 Heaney fought on a Queensberry show – and delivered an impressive performance – back in November at Arena, Birmingham where he overcame Nelson Altamirano via a fifth round stoppage.

His most recent encounter, shortly before lockdown in mid-March, saw him defeat Christian Schembri to claim the vacant IBO Continental super middleweight title on his home patch of the Kings Hall in Stoke.

In June 2019, the now 31-year-old won the vacant Midlands Area belt on points after edging Tom Stokes over 10 rounds.

Heaney’s public profile has been notably increased in recent months by the social media release of his ring entrances in front of his passionate Stoke fans bellowing out the Tom Jones 1968 hit ‘Delilah’.

The ring walk and raucous atmosphere has captured the imagination and Heaney hopes his exploits result in major TV shows finding their way to his home town now he is under the promotional navigation of Frank Warren.

“It is like a childhood or young adult’s dream for me,” said the lifelong Stoke City supporter. “When I was a young amateur years ago and you had the dream of winning an ABA title and that sort of stuff, the whole idea behind it was so you could get signed by Frank Warren in the end.

“That was my goal all the way through. So it is like a dream come true for me to be signed by Frank Warren. He has always been the top dog and there is no-one else like him, so this is a dream for me.

“It is a strange one because I know Frank normally signs young fighters but, while I am 31, I am a young 31 and was a late developer as well growing up. I think that is why the seniors were always tough for me in the early part of my amateur days, just because I didn’t have that man-strength.

“I genuinely now feel like I am a 24-year-old and have, one hundred per cent, got some good years left in me,” he added, before suggesting his social media stardom can only help in propelling him to the next level.

“The video that went viral of me recently means people across the country recognise my name a little bit more, but I have also been performing well and I won the Midlands Area title against a good kid, while being matched really well.

“So while I’ve got the entrance and all my supporters, luckily I can fight as well. It would be horrible to have all this support and not be able to back it up in the ring.

“I think they can really do something with my crowd because I believe the occasions to be amongst the most exciting in the UK. They don’t stop singing all the way through, they are loyal as anything and I really believe Frank Warren and Queensberry can build something around my support – I really do.

“I will wait to see what the plans for me are in terms of what titles to go for and who they want me fighting. Be it Manchester, Birmingham, Liverpool – I know I will take a lot of people with me.”

While plans are, indeed, being drawn up down promotional corridors, Heaney himself has recently become something of a target for fellow 160-pounders with several call-outs coming via social media channels.

“It’s funny because at first I thought they were just calling for me because they thought they could beat me, but then I realised. There is a lad down south – I don’t want to mention his name – who keeps mentioning me and I know why he’s doing it.

“When you mention the Stoke lad they know they will sell loads more tickets. It is like using my name and my supporters to basically jump start their careers, whereas I had to put the graft in and build up my following.

“They are just trying to jump on the train. If they had half a football backing and their supporters knew they were fighting a lad from Stoke, they would sell hundreds more tickets.

“I replied saying ‘pay your dues to the professional game, win some ranking points and then I will happily sort you out. Until then stop talking about me because my missus is getting jealous!'”

“I’ve got a few fighters wanting to fight me now so I won’t be short of opponents when we get going again.”

THE UNBEATEN MIDLANDS puncher Danny Ball has joined the welterweight ranks at Queensberry Promotions and will now fight under the Frank Warren banner.

The 23-year-old, who holds a record of 9-0-1 (4 KOs), enjoyed a major career breakthrough in October of last year when he upset the odds from the away corner in Ellesmere Port and stopped the home fighter and highly regarded Mason Cartwright inside three rounds to claim the vacant WBC International Silver title.

It was a statement performance that signalled a new force arriving on the welterweight scene that includes now fellow Queensberry fighters in Chris Jenkins, Johnny Garton and new boy Ekow Essuman.

NEWS:   Makabu vs Mchunu & Trevor Bryan vs Guidry On January 29th in Ohio

The clinical finish clearly caught the eye of those charged with recruitment at Queensberry, who quickly registered an interest.

“I can hardly believe it because it is such a massive thing and a massive opportunity for me,” reacted the Kingswinford-based Ball to his career development.

“Just after I won my WBC belt back in October my manager Errol (Johnson) said there had been contact and there was some interest in me. Then it went quiet for a bit and I didn’t think anything was going to come of it, but then the contract came through so I signed it on the same day and sent it straight back!

“It was an unbelievable feeling,” added Ball, who knew full well that he wasn’t drafted in for a shot at his belt with any expectation of him pulling off a victory.

“I don’t think anybody expected it apart from me and my team really. Everything was geared up for him to win it. He sold about 500 tickets, while I took about 100 up to Ellesmere Port with me and took it away from him as soon as I had the opportunity. I took it with both hands and I was always confident of winning the fight anyway.

“One hundred per cent it was my breakthrough and when we took it I said straight away that I was confident of beating him. It took me a couple of rounds to warm into the fight, but he didn’t faze me and when the opportunity came I got him out of there.”

Boxing runs through the Ball family with his uncle, Shaun Cooper, being a veteran of over 90 fights and captained the England amateur team, while his brother Jamie is the Midlands Area champion at super welterweight.

Danny himself departed the amateur scene at the age of 15 after 12 fights, of which he won nine. A rise in weight due to the inactivity led him to the white collar circuit to get fit, where he took part in 15 fights and won them all.

He made his professional debut with a first round stoppage in July 2017.

While he reckons it won’t be himself that starts any flirting with the more established 147-pounders, he insists he will not shy away if any of them are ready to sign up for battle.

“I don’t think I am in a position to call anyone out, but if they come to me I wouldn’t turn it down. I am 110 per cent confident of getting in there with anyone in the top five or ten in the rankings. No problem.

“I don’t think I have hit my prime in my body yet so just keep putting them in front of me and I will keep taking them out, then hopefully I will get the opportunity of another belt on the way up.

“It is a boring time at the moment but I am glad of the time with my little girl. I have been ticking over doing my road runs and exercises in the garden. I am just getting itchy to start punching again now.”


« Canelo and Golovkin could fight twice in 2020