Canelo and Golovkin could fight twice in 2020 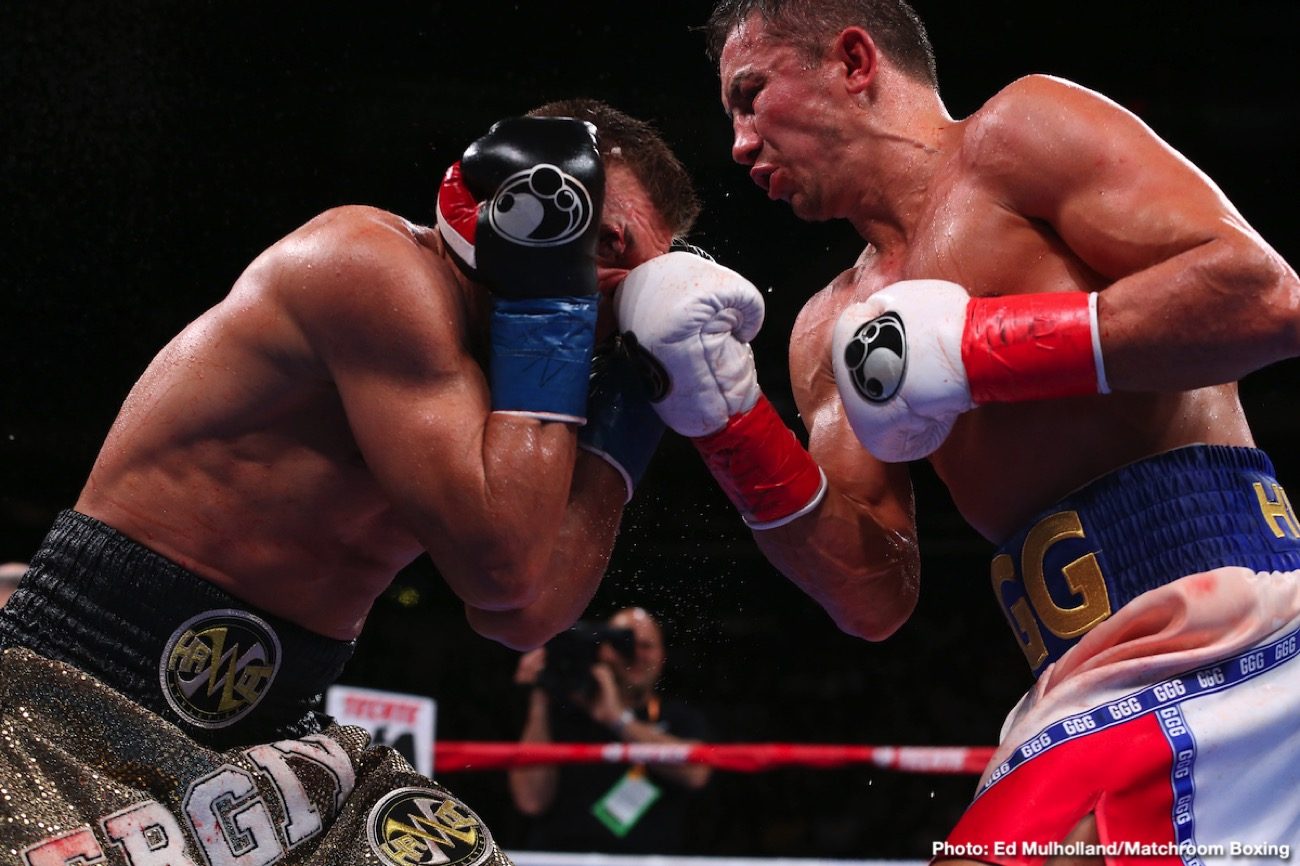 By Sean Jones: Eddie Hearn wants to have Gennadiy Golovkin and Canelo Alvarez fight other opponents in August and September before meeting in a trilogy match in December, according to Chris Mannix of DAZN.

For IBF middleweight champion Golovkin’s part, he would be defending against mandatory Kamil Szeremeta (21-0, 5 KOs). It’s unclear whether Golovkin’s fight with Szeremeta would take place in August or September.

With Golovkin being the older guy than Canelo at 38, it would make sense for him to fight Szeremeta in August rather than September. It would Golovkin a little more time to recover and rest before facing Canelo in December.

It’s a win-win situation for Hearn if Golovkin and Canelo face other guys first before meeting in December. Hearn promotes Saunders, so it helps him that Canelo fights him.

“Sticking with Canelo, GGG’s promoter Eddie Hearn mentioned a potential plan to get Canelo and GGG back in the ring before the end of the year,” said Chris Mannix of DAZN. “Hearn told ESPN ‘It kind of feels in an ideal world; we’d have Golovkin fight [Kamil] Szeremeta, Canelo to fight Billy Joe Saunders.

“Those fights would be August and September, and the winner’s fight in December. Who does fighting twice in 2020 impact more, Canelo or GGG?”

“The older fighter, of course, it’s going to impact GGG a little bit more,” said Sergio Mora. “But if you look at Szeremeta, he’s the softer touch. He’s got a low knockout ratio of five knockouts in 21 fights.

“With Billy Joe Saunders, he’s a two-division world champion. The heavier burden of an opponent is going to be with Canelo. But I think Golovkin, being the older fighter, is getting the softer touch in a way. We know that Canelo has already been there before in 2018.”

Golovkin seems to really want the Szeremeta fight, and this isn’t new. He was talking about wanting to fight Szeremeta after his fight with Steve Rolls last year. For the average boxing fan, they’ve never heard of Szeremeta, so they’re not interested in seeing Golovkin defend his IBF strap against him.

But perhaps Golovkin rates Szeremeta as a talented fighter. If that was the case, why isn’t Golovkin facing Jermall Charlo? He’s talented and a threat to Golovkin. 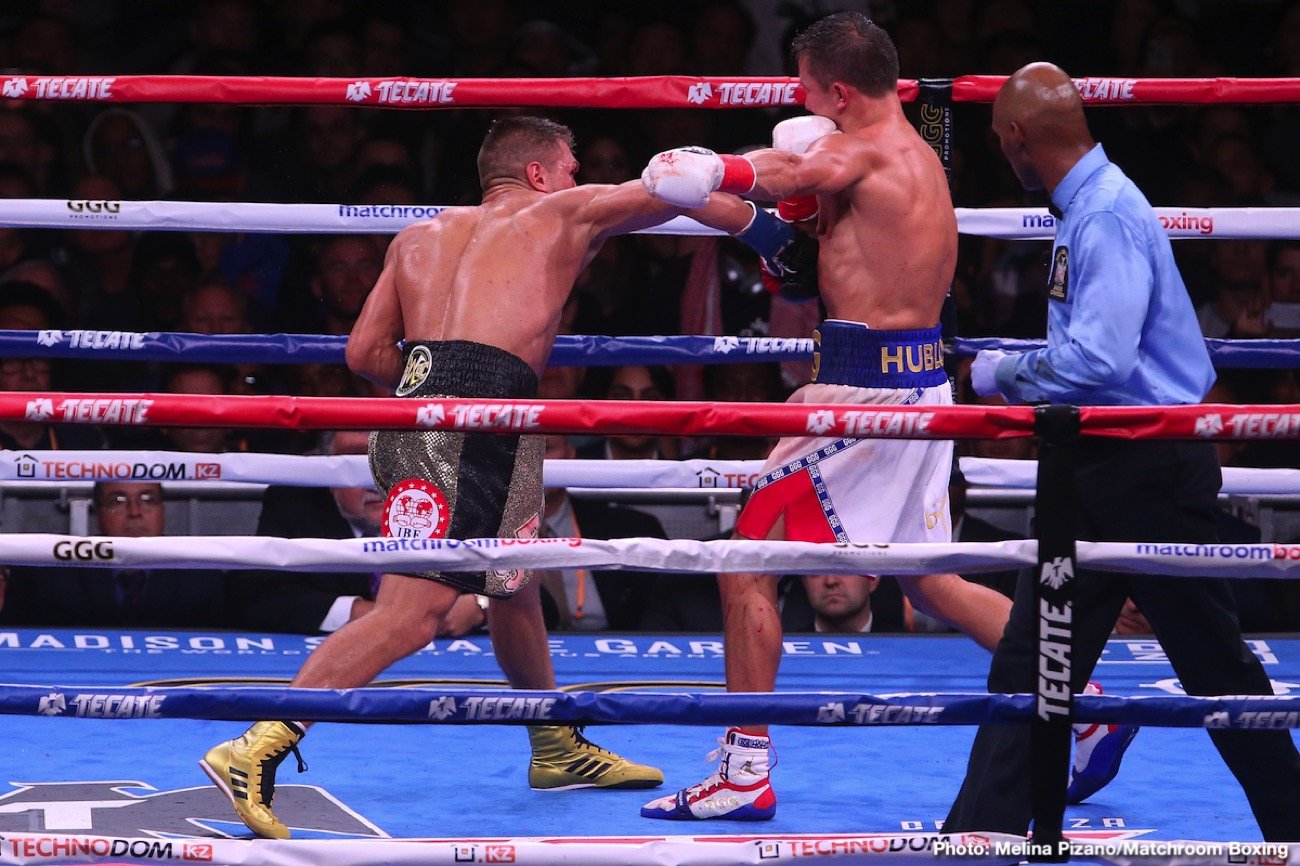 “He fought Golovkin in September, and then he went and fought Rocky Fielding in December,” said Mannix on Canelo. “He can do it, it is possible, and it is physically feasible. So I can see both of these guys coming back at the end of the year, and getting these two fights out of the way.”

“Let’s not pretend that Eddie Hearn doesn’t have a financial stake in extending this out a little bit further,” said Mannix of the Canelo vs. Golovkin III. “Eddie Hearn also promotes Billy Joe Saunders. He’d like to get Billy Joe Saunders that payday and get himself a payday as well before going off to the Golovkin showdown.

“So there’s certainly some self-interest there on Eddie Hearn’s part. But I do think that plan makes some sense. Golovkin, to me, is the one that needs the fight more than Canelo does. Golovkin is coming off something of a lackluster 2019.”

The only Canelo will get in facing Saunders is it’ll help him broaden his market in the UK. Saunders is from the UK so that Canelo will pick up new British fans. DAZN stands to gain by Golovkin fighting Saunders because they can bring in new subscribers to that country.

Whether DAZN told Canelo to fight a British fighter specifically is unknown. It would make more sense for Golovkin to fight Callum Smith, though, because he’ll receive more credit for beating him than Saunders.

“He got two wins, he got a middleweight title back, but the Steve Rolls fight wasn’t perfect, and it was an extremely difficult fight against Sergiy Derevyanchenko,” said Mannix. “So I think for Golovkin, a fight against Szeremeta, a fight where I believe he wins by spectacular stoppage.

“I think Canelo, he’s ready right now. Billy Joe Saunders, he might be able to pose some problems [for Canelo] because he’s slick, and he’s a talented boxer, but Canelo beats him. I don’t think Canelo gains much from that. I think Golovkin has a lot more to gain from taking a fight in between.”

“Anytime you fight an undefeated fighter like Szeremeta, whether he has a high knockout percentage or not, to be the first one to take that zero means a lot,” said Mora. “Even if it’s a fighter like Golovkin, who has been to the mountain top against the very best.

“Taking that first zero is a notch on your belt. That’s going to get him up for that fight. He knows he’s going to need to look good. He can’t look bad if he wants that trilogy and that big money from Canelo, and that big excitement and big drama show will come back as well.

“I agree, in the Steve Rolls fight, Golovkin had some difficulties. But he still ended in a dramatic and big show fashion. So it doesn’t matter. He still got the knockout. If he can do that against Szeremeta, we’re back. We’re back on the gravy train.”

Glolovkin can’t get too much of a confidence booster fighting Szeremeta because he’s not a good enough opponent to help him that department. There are other fighters with unbeaten records that Golovkin could face, and they’re better known with U.S fans.

“You can keep beating nobodies and keep that zero on your record, but it doesn’t matter unless you’re beating somebody,” said Mannix. “I don’t care that Szeremeta is undefeated. He is not a credible opponent that threatens Gennadiy Golovkin.”

“Now you can’t even pick Szeremeta in a lineup of boxing aficionados and people that know the sport. But he has that zero. I’m not fascinated by it. He hasn’t been beaten as a professional.

It probably won’t help Golovkin at all in beating Szeremeta because he won’t get credit. To obtain praise from fans, Golovkin needs to face these fighters:

Golovkin probably won’t be fighting too much longer. If he loses to Canelo again, he’ll likely hang up his gloves when his contract with DAZN expires. There would be no point in DAZN extending Golovkin’s contract.