By Matt Lieberman: Vergil Ortiz Jr. says he thinks he’ll be ready to beat welterweight champion Errol Spence Jr. by next year. Unlike some of the other young fighters, the 22-year-old Ortiz Jr. (15-0, 15 KOs) isn’t in a rush to take on the big names.

Ortiz’s career has been interrupted with the pandemic causing his March 28 fight against Samuel Vargas to be postponed. Right now, Ortiz Jr. doesn’t know when he’ll be fighting, but he still thinks it’ll be against Vargas.

Ortiz wants to prepare himself well before he takes on IBF/WBC 147-lb champion Spence in 2021. He’s well familiar with Spence from their amateur days when they shared the same gym in Texas.

Ortiz Jr. was kind of confused recently after hearing Spence remembering him as a “crybaby little kid” when they trained in the amateurs. 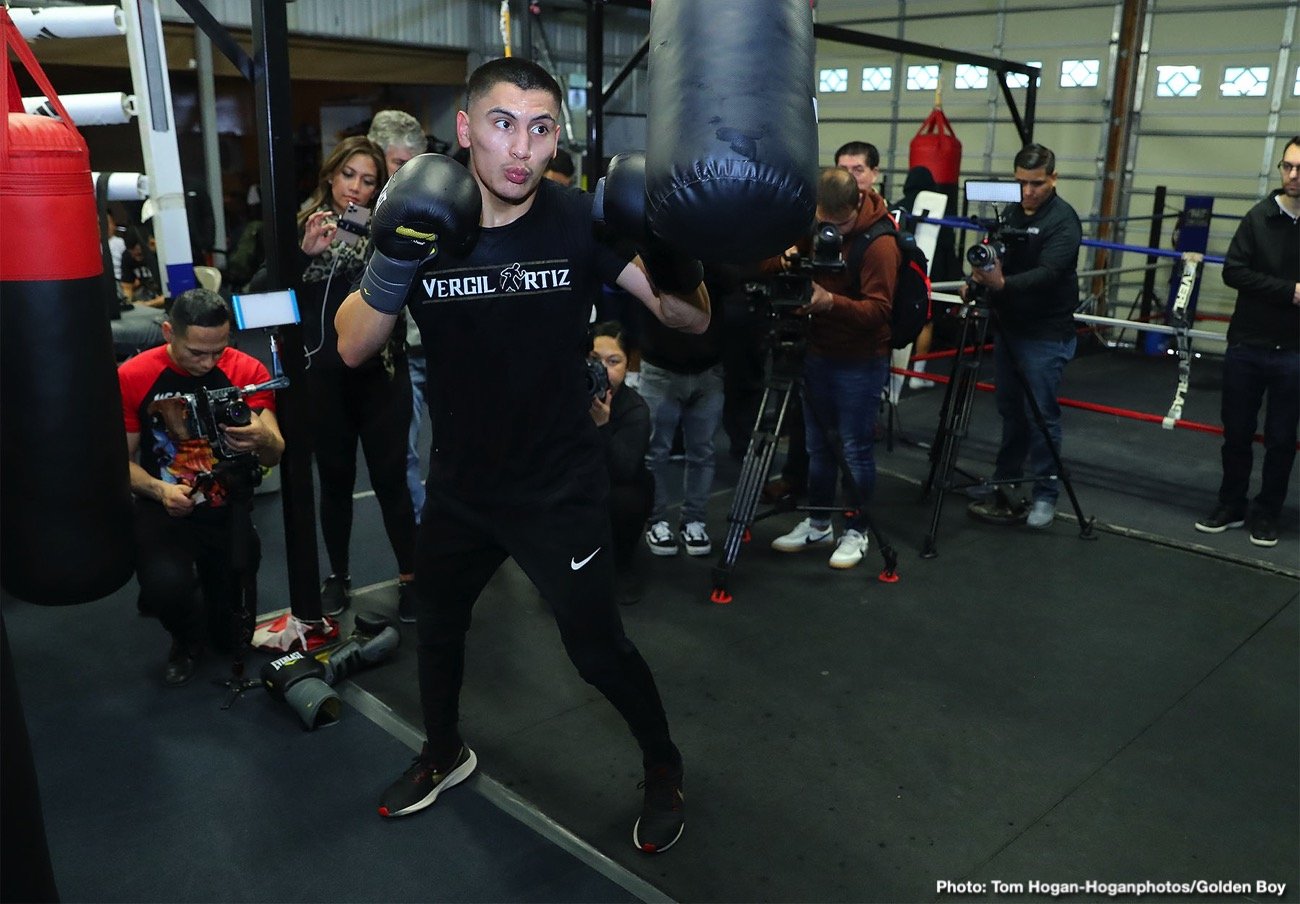 “I don’t think that’ll be the reason. If the fights going to get made, it’s because it was meant to be made,” said Vergil Ortiz Jr. to The Ak & Barak Show about a fight with Errol Spence Jr. “We used to train at the same gym, and I used to watch him train. I seen him get ready to go to the Olympics and fight in these tournaments and qualify. I hope that he thinks that I’m good enough.

“I’m not sure what he meant,” said Ortiz Jr. in responding to the comments about Spence calling him a “crybaby kid” from when they used to train at the same gym. “I was never hurt as a kid. I was pretty much the best one in the gym.

“The only thing I could come up with is he was basically trying to explain how little I was when he met me. Other than that, I really don’t understand,” said Ortiz Jr.

It’s more likely that Spence was talking about Ortiz’s size as a kid when he called him a “crybaby” this week. Spence was interviewed by Premier Boxing Champions, and he reacted in a negative manner when told that Ortiz Jr. had called him out.

Spence started off saying that Ortiz is a “little crybaby kid,” and then he finished by saying that he won’t be ready to fight him for another 2 to 3 years. When they do fight, Spence says he’ll beat Ortiz Jr. Spence seems confident of victory, and it appears he’s studied Ortiz Jr. enough to know that he’ll defeat him when they eventually fight.

“It’s definitely between him and Crawford,” said Ortiz Jr. when asked if Spence is the best fighter at 147. “Crawford is definitely more technically sound, but I wouldn’t think he’s as strong as Spence or anything like that or have the same size. I would say they’re both the toughest but in their own element.

“As of right now, I would give anyone in the 147-pound division a hard fight. I don’t care who it is,” said Ortiz Jr. when asked if he thinks he’s ready for Spence now. “As far as me thinking I can beat him right now, I don’t think so, but maybe in a year.

“But there are a lot of other fighters like that who just call out names and tag people and talk crap on Twitter. I mean, you can’t let things go unsaid sometimes. It’s the slippery slope. You let them say something one time, they’re going to keep saying it,” Ortiz Jr. said.

It’s going to be difficult for Ortiz Jr. to beat Spence without him getting more fights under his belt before next year. The difference between the two fighters is Spence is more versatile due to his boxing pedigree. He fought in the 2012 Olympics, and he’s looked like a monster since turning pro.

What separates the two right now is Spence is capable of boxing when he wants to. We saw that in Spence’s fight with Mikey Garcia when he chose to box him for 12 rounds. 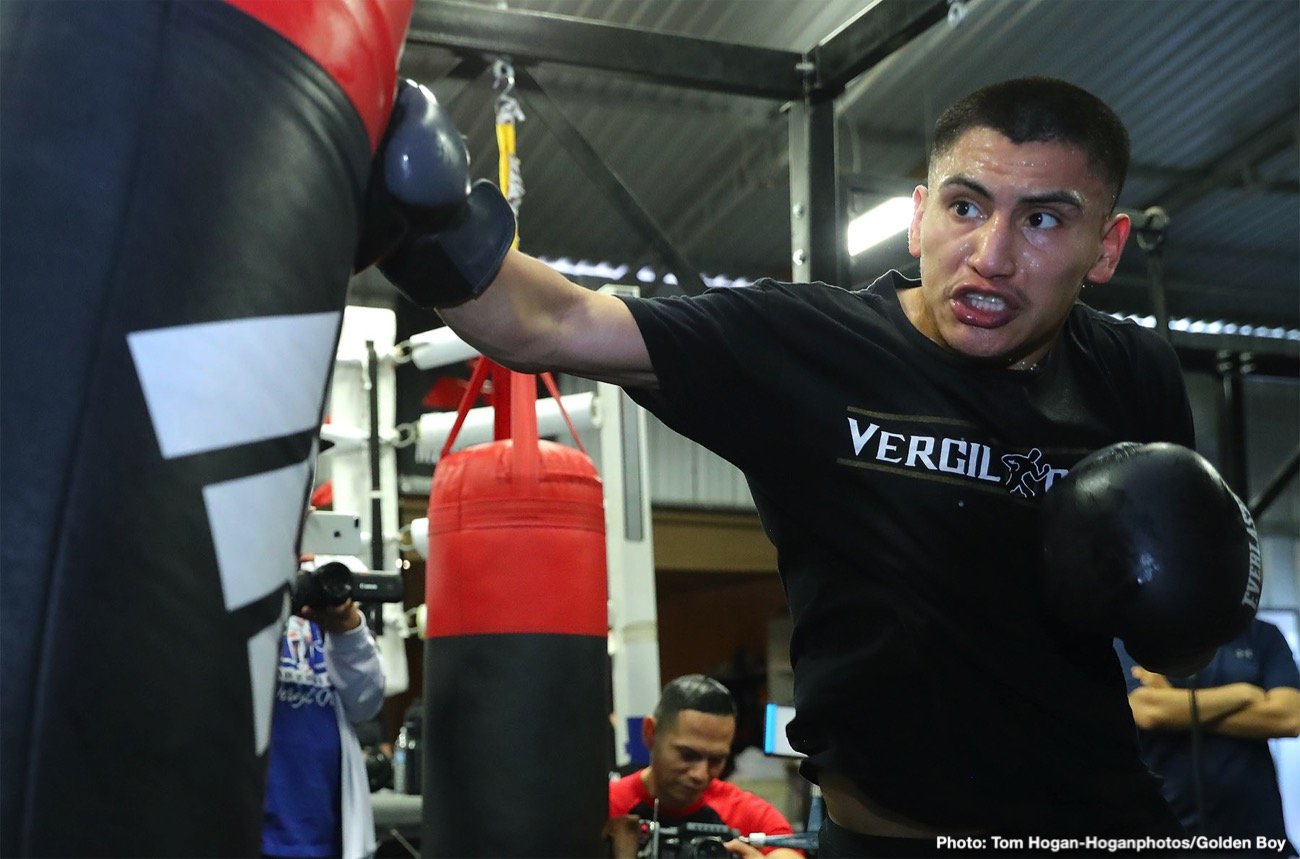 “The thing I remember about the fight itself was how much energy the arena had,” said Ortiz Jr. remembering his fight against Mauricio Herrera last May at the T-Mobile Arena in Las Vegas, Nevada.

“I had never fought in front of that many people before being the co-main event for Canelo. It was honestly a privilege to be there. They didn’t have to put me on there. That wasn’t the plan, but the fact is the co-main event got canceled, and they asked me to step up. I was happy.

“I don’t have any particular opponent for this year,” said Ortiz when asked who he’ll be fighting next in 2020. “This year has definitely been slowed down a little bit. As far as my next fight, we did sign a contract for an opponent [Samuel Vargas] that I was supposed to fight [on March 28].

“So I’m pretty sure that fight was just postponed, and I’m pretty sure I’ll still end up fighting Vargas. But for when it is, we really don’t know how long this thing is going to last. Hopefully, it’ll end soon, but as far as now, we just don’t know.

Vargas is a tough fringe level fighter that has been in with a lot of good fighters. However, Ortiz Jr. should have an easy time beating him like he did with his last opponent Brad Solomon.

Hopefully, Ortiz Jr. doesn’t need to wait until 2021 to get the fight over with against Vargas because he wants to move on

« Is Pacquiao still one of the elite fighters at 147?