By Jim Maltzman: Shakur Stevenson believes that Teofimo Lopez will need to go after Vasiliy Lomachenko early to try and knock him out if he wants to win their fight.

Stevenson notes that Teofimo (15-0, 12 KOs) has never fought anyone like Lomachenko (14-1, 10 KOs) before, and he could find it difficult to land his power shots against him. But if Teofimo goes after Lomachenko hard at the beginning of the match, he could land a big game-changer shot that will get him the KO win.

IBF lightweight champion Lopez and WBA/WBC/WBO champ Lomachenko will be fighting for the undisputed 135-lb championship when boxing resumes after they’re given the green-light to fight.

They had their fight scheduled for May 30, but the match is postponed due to the pandemic. Top Rank Boxing promotion hasn’t given a new date for the fight yet, but the hope is that it can happen this year.

Teofimo’s experience is thin going into the Lomachenko fight. His best wins have come against Masayoshi Nakatani, Richard Commey, and Diego Magdaleno. Although Teofimo’s win over Commey made him the new IBF 135-lb champion, he still hasn’t fought a talented fighter in the division. To get ready for a guy like Lomachenko, Teofimo needed to fight someone like Devon Haney, Gervonta Davis or Ryan Garcia.

“I think I’m with Teo, and I want him to win, and when the fight happens, and I’m there, I’m going to be cheering for him,” said Stevenson to Fighthype about Teofimo Lopez when he fights Lomachenko. “But I think it’s a tough fight for him [Teofimo].

“Teo has never been in the ring with anyone on that level. Don’t get me wrong; Richard Commey was a good fighter, but I kind of knew that was going to happen with the style that Richard Commey came with. I watched him against Ray Beltran, and Ray Beltran had him out on his feet a couple of times.

It’s going to be difficult for Teofimo to beat Lomachenko because he hasn’t fought a highly-skilled fighter like him before, and he’ll have to learn as he goes during the fight.

Teofimo has beaten some excellent top 10-level fighters at 135, but the kind of talented guys that will get him ready for what he’ll be dealing with in Lomachenko. In the past, Commey (29-3, 26 KOs) lost to Denis Shafikov and Robert Easter Jr. before meeting up with Teofimo last December.

You can say that Commey, 32, was a paper champion because he won the vacant IBF belt in beating little known Isa Chaniev, who isn’t a world-beater. In Commey’s one successful title defense, he defeated 38-year-old Raymundo Beltran last June by an 8th round knockout Beltran had Commey hurt on a couple of occasions in that fight, though.

Teo must go for the knockout early

“I don’t want to make no predictions because it’s a hard fight,” said Stevenson on the Lomachenko vs. Lopez fight. “But if Teofimo is going to win, he’s going to have to try and get him out of there early.

“As the fight goes, Teofimo is going to get better and better and pick up the pace more. So I think that should be his game plan looking for the right shot to get him out of there with,” said Stevenson on what Teofimo should do against Lomachenko.

It won’t be easy for Teofimo to hit a moving target that Lomachenko will be presenting to him all fight.  If Teofimo swings for the fences each time Lomachenko is in punching range, he could hurt him with something.

To fight like that, Teofimo, 22, will need to handle all the counter shots that Lomachenko hits him with during their bout. The last thing Teofimo can afford is to get demoralized from the peppering punches that Lomachenko will be landing during the contest.

Lomachenko likes to showboat when he’s on top, and he does that to mentally break his opponents into giving up or fighting with less ambition. It’s crucial that Teofimo stay calm and composed, and realize that it’s a numbers game against Lomachenko. Teofimo will likely miss on 80 to 90 percent of his power shots, but eventually, he could land a big enough punch to hurt Loma.

“That’s the ultimate fight for me,” said Shakur Stevenson to Fighthype on a bout against Lomachenko. “I said this in an interview when I was 2-0 that might dream fight. I said this after I sparred Lomachenko.

“If after his next fight [against Teofimo Lopez], and does what he says he was going to do in going back down to 130, I think I’m going to be the first one to beat him Lomachenko.

“I’ll be the one to put his first ‘O’ on his record. I’ll be the second one [to beat Lomachenko]. I think I’ll be the first one to beat him. And I already know from the last time we sparred that I got way better in development in the pro ranks.

“I still got time to develop and get better and better. No disrespect, but I think Lomachenko is getting older, and I think if they [Top Rank] put us in the ring, I’ll be the first one to beat him.

“There’s nothing I can’t do. Stylistically, as you say, I think I’m the perfect person to beat Lomachenko.,” said Stevenson.

If the sparring between Lomachenko and Stevenson when as good as Shakur is saying it did, then he might have the talent to beat the 32-year-old Lomachenko.

At 22, Stevenson has the youth to defeat Lomachenko, but it’s still going to be difficult for him to handle the movement, angles, and the rapid-fire combinations from Loma. In that respect, Stevenson will be dealing with the same issues that Teofimo will in terms of his lack of experience. 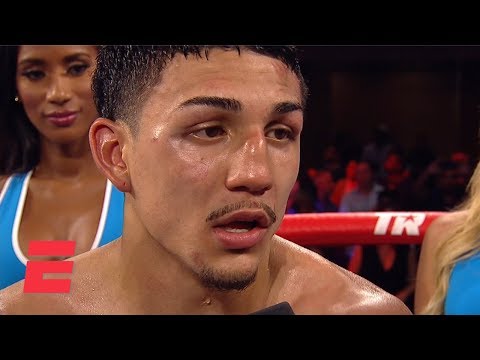 
« Jose Ramirez to stick it out with Viktor Postol fight

Mairis Briedis vs. Yunier Dorticos at risk of being postponed »