By Kenneth Friedman: Ryan’ Kingry’ Garcia is ready to take a mammoth step up in class against Jorge Linares in his next fight. The former three-division world champion Linares is a severe threat to beating the 21-year-old Ryan.

For those who doubt that Linares (47-5, 29 KOs) is a significant risk for Ryan, his 4th round knockout victory over Carlos Morales was proof. In contrast, Ryan had a hard time beating Morales by a controversial 10 round majority decision in 2018. Morales is the only common opponent that Linares and Ryan share.

Before the boxing world came to a standstill by the pandemic, Ryan and Linares were expected to fight in July in Los Angeles. Ryan is still interested in facing the 34-year-old Linares, which should make for an intriguing battle from start to finish.

Perhaps stung by the criticism from people, who say Linares will beat him, Ryan wants to prove himself against the veteran. They don’t get much better than Linares when it comes to former world champions. Ryan’s best hope is that Linares has lost enough from his game to where he can win.

Kingry Ryan must defeat Linares, as his resume is empty thus far in terms of competent opposition. Ryan’s last two opponents Francisco Fonseca and Rumoero Duno were fighters with minimal talent and who weren’t good enough to be useful in preparing him for more stringent tests.

Linares is a marked improvement over those fighters, and in some believe he might be too good for inexperienced Ryan.

Though some boxing fans are under the impression that Linares on the slide, his last performance against Morales on Valentine’s day showed that he has a lot left in the tank. Linares’ hand speed, power, and technical skills are still near the top of the division.

While Linares isn’t as quick as Ryan, he has a better punch assortment and more ways of countering his opponents when they throw punches. Ryan throws exclusively left hooks and little else. With Linares, it’s a constant guessing game which punch he’ll be throwing back at his opponent and from what angle. His variety is incredible. Linares is well-schooled in a way that Ryan is lacking.

The trainers for Ryan, Eddy Reynoso, says he wants him to get more experience under his belt before he challenges for a world title. Reynoso wants Ryan to fight two more times because he’s been knocking out his opposition too quickly, and he’s not had the learning situations that he needs.

Ryan is always looking to KO his over-matched opposition as fast possible, and it’s not helping him by doing this.

Bring Linares on! After that fight I don’t want to hear from anyone anything about who I call out! I just want to fight who I want to fight and who everyone says I fear…

It won’t be the end of the world if Ryan loses to Linares. As long as Ryan learns from the experience, he can use the improvements to tackle the top names at 135. He wants to take on Gervonta Davis, Devin Haney, Vasily Lomachenko, and Teofimo Lopez.

Can Linares give Ryan Garcia a tough battle?

“My coach is my coach, and I listen, but he has been shocked twice starting with DUNO, He didn’t expect that. He’s always searching for someone to give me a true battle, and with each fight, he’s waiting to see. Maybe we will see with Linares? But that’s the big, right?. SHOCK THE WORLD,” said Ryan on Twitter.

It appears that Ryan doesn’t like the idea of his opposition being picked for him by his handlers. Ryan’s Golden Boy Promotions know how to match young fighters, and it would be wise for him to continue to face the guys they want him to without resisting their choices. Golden Boy did a great job with Canelo Alvarez in bringing him along earlier in his career.

The only tough opponent Golden Boy matched Canelo up with earlier in his career was Floyd Mayweather Jr., and fought well in a losing effort. Canelo learned a lot from the Mayweather fight, and the loss made him a better fighter.

Whatever Ryan learns from the Linares bout will serve him well for when he eventually faces those type of fighters. Right now, it would be a mistake for Ryan to fight any of those guys with the limited experience he has in the pro game.

“I would like Ryan Garcia to have a couple of more fights before challenging for a world title because, in the last three fights, we’ve only fought in a combined four rounds,” said Ryan Garcia’s trainer Eddy Reynoso to ESPN Deportes. “He still needs to learn more, fight with boxers who can give him a battle.”

It wouldn’t be surprising to learn that Reynoso wants Ryan to have a lot more than two more learning fights. The coach knows hows that Ryan wants to come off the leash and go after the top guys, and it’s impossible to hold him back.

Trying to hold Ryan back is near impossible now, and it’s going to get worse. Once Ryan beats Linares, his ambition will take over, and he may start calling the shots. Hopefully, Ryan doesn’t bite off more than he can chew early on in his career because he could mess things up for himself.

If Ryan gets beaten especially severely by a young fighter like Tank Davis or Devin Haney, it might ruin his confidence. 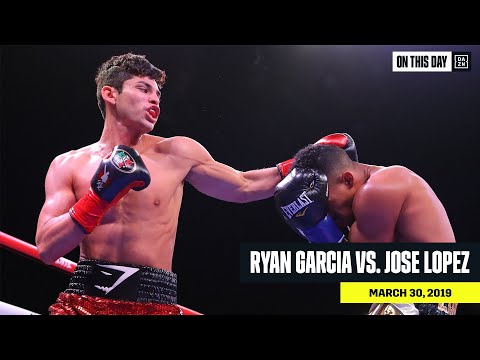