Lomachenko: Teofimo making a mistake if he tries to Bully him 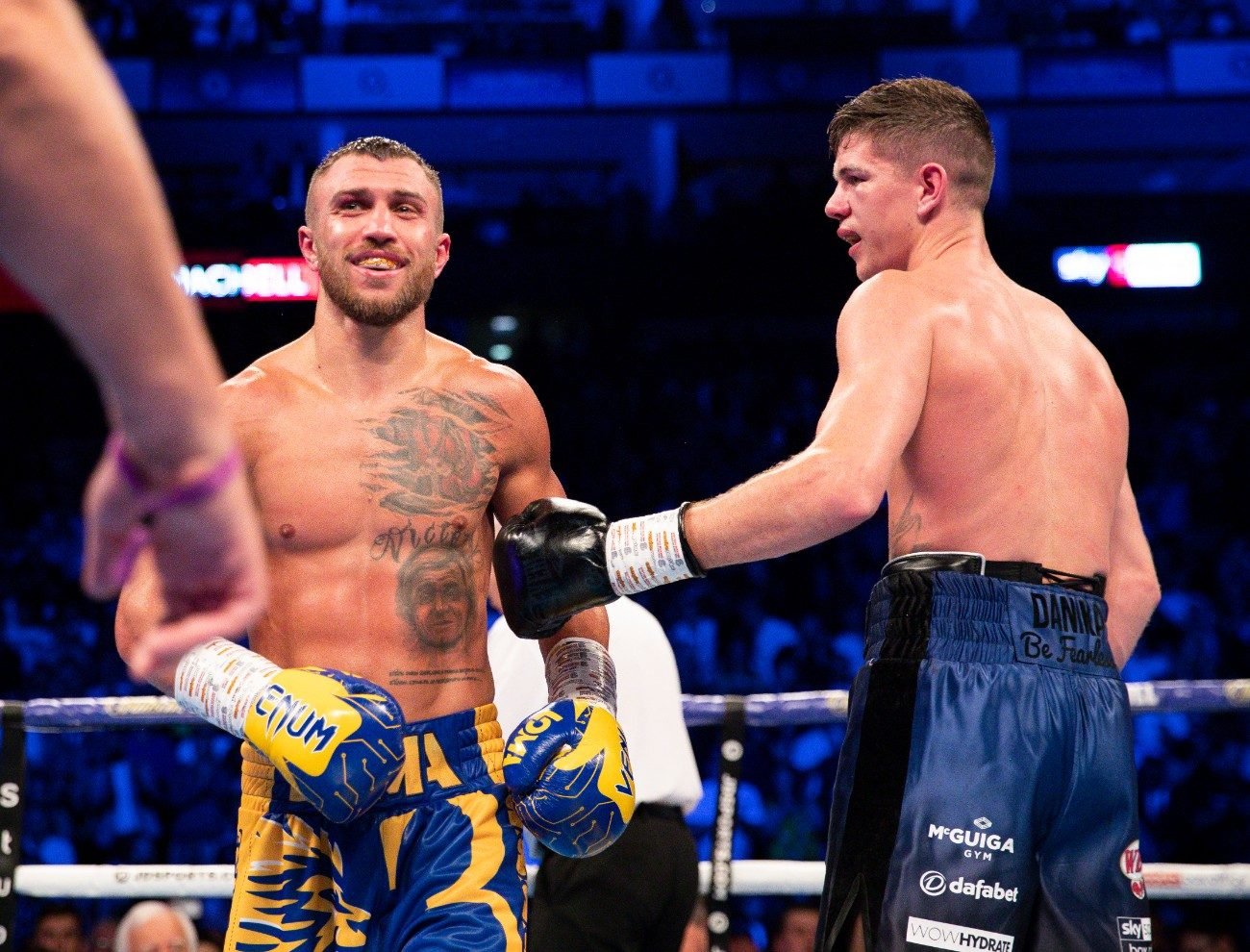 By Chris Williams: WBA/WBC/WBO lightweight champion Vasiliy Lomachenko says he knows how to defeat Teofimo Lopez’s fighting style, and he thinks he’ll be making a big mistake if he tries to bully him the way he’s done in his past fights.

Lomachenko (14-1, 10 KOs) wants to beat the undefeated Teofimo (15-0, 12 KOs), take his IBF lightweight belt, and then look him and his father/trainer in their eyes afterward. This gesture would be made presumably for Lomachenko to savor his win by reading the look of defeat in the eyes of Teofimo and his dad.

Lomachenko vs. Lopez possible for 2021

Right now, the Lomachenko vs. Teofimo unification contest is still a long way off. Lopez and Lomachenko could battle it out in 2020, and it’s equally likely that the two won’t go to war until 2021 at the earliest. That will depend on the development of a vaccine to rid the world of the plague, which is said to be 12 to 18 months away.

Lomachenko, 32, is counting on being able to use his boxing skills to out-smart and outclass Teofimo the way that he has in his past 15 fights as a pro, but that may not happen. Teofimo has the body of a welterweight, who somehow can drop down to 135 to compete. However, Teofimo plans on moving up to 140 after he faces Lomachenko, so this is likely the last time he’ll fight at 135.

“Of course I’m training because it’s my job. Nobody knows when we can start,” said Lomachenko to Top Rank Boxing. “Of course, I was disappointed [at Teofimo fight being postponed]. The thing is for everyone on this planet to get healthy.

“We will see each other in the ring. I think he’s a good boxer, a good fighter, he’s young, and he’s hungry, and he has big power. I want this fight because he’s a world champion, and he holds my belt, the IBF title.

“Nobody can predict what’s going to happen,” said Lomachenko on the Teofimo clash. “People are talking about which round they’re going to knock somebody out. I am getting very interested. I want to see that,” said Lomachenko.

Interestingly, Lomachenko says Teofimo is holding “my belt.” That suggests that Lomachenko is already assuming that he’s going to beat the 22-year-old before they’ve even fought.

Lomachenko’s past success has gone to his head. But at the same time, it’s a mistake on his part to be looking past a dangerous young puncher like Teofimo, given that all he needs to do is land one punch and the fight is over.

Teofimo’s raw power goes beyond technical ability and brings things back to the primary level, where the fighter with superior power wins. The power and youth of Teofimo could be too much for the aging technical fighter Lomachenko.

Lopez making a mistake if he attempts to bully

Lomachenko may be able to glare into the eyes of Lopez after beating him, but on the flip side, there’s also a chance we could see the reverse of that. Will Lomachenko dare to meet Teofimo’s gaze if he loses to the young upstart, or will he avert his eyes and stare at the ground or off into the crowd?

Although Lomachneko has racked up three good wins over Campbell, Pedraza, and Linares at 135, he hasn’t fought the dangerous guys. I’m talking about Gervonta Davis, Ryan Garcia, Devin Haney, and Teofimo. Lomachenko has been beating the fringe level guys, who were getting up there in age, and no longer had the talent to compete with the best.

“It is not an easy style,” said Lomachenko about the way Teofimo fights. “It’s easy to fight attacking fighters who are coming forward. It’s much easier. This style of counter puncher is more difficult to fight. The winner will be the one with the better boxer IQ. But with his shoulder roll, I think I know what I have to do to win,” said Lomachenko.

It’s not going to be easy for Lomachenko to beat a fighter like Teofimo, seeing that he has size, power, and youth going for him. As I mentioned earlier, Teofimo is essentially a 147-pounder, who is able to melt down to 135 to compete at lightweight.

Teofimo can get away with this due to him being young. As we’ve seen in the past, younger fighters can dehydrate down in weight to fight in divisions that are well below their body size. Once a boxer starts to get older, though, they find it increasingly more difficult to make weight, and they need to move up one or two divisions.

Due to Teofimo’s massive size, this is going to tough match-up for Lomachenko and even more of an obstacle than his fight with Orlando Salido in 2014. Lomachenko gave away a lot of size in that fight, and he ended up losing.

“Right now, I don’t think he is going to fight me,” said Lomachenko on Gervonta ‘Tank’ Davis. “He might want to fight me, but his promoters aren’t going to let him.

“Aside from him, that weight class is getting very interesting,” said Lomachenko about the 135-lb division. “We have a lot of good names in that weight class. Not the champions, but they are in the rankings. So I think it’s a hard weight division.

“It’s unpredictable again,” said Lomachenko when asked if he’ll stay at lightweight. “If we’re going to be sitting here for one year longer [being inactive], who is going to be coming out, and in what weight class will they be?”

Lomachenko will be viewed as a ducker if he moves back down to super featherweight after his fight with Teofimo. The more prominent names are now at lightweight in the form of Devin Haney, Gervonta Davis, and Ryan Garcia.

For Lomachenko to abandon the 135-lb division to return to the 130-lb weight class, it would signal to the boxing world that he doesn’t want any part f those fighters. It’s not that the super featherweight division doesn’t have talented guys.

The problem is the casual boxing fans aren’t excited about any of the guys at 130. Arguably the most famous fighter at super featherweight today is Leo Santa Cruz, and Lomachenko isn’t going to be able to fight him. The two compete on different networks and have different management. So if Lomachenko moves back down to 130, he’ll be looking at fighting these guys:

Those are good fighters, but they’re not popular in the U.S with the casual boxing fans yet.

“Yes, DAZN posted something on DAZN, and Devin Haney said he would knock me out,” said Lomachenko. “So that is why I answered him, ‘Are you serious?’ He has not fought anybody, and now he is saying he’s going to knock me out. I said, ‘No problem. Let’s do it,’ and he answered me right away, saying, ‘Yes, we can do it.’ I said, ‘OK, I am ready.’

“He knows I am ready. I think he is ready, and we can give the fight for the fans that everybody wants. That’s why I mentioned before this that this is an exciting weight class. Yes, I would like to fight anyone that is there, and I would like people to say there is only one champion, and that is Loma,” said Lomachenko.

WBC ‘Champion in Recess’ Haney (24-0, 15 KOs) views Lomachenko as having ducked him when he accepted the World Boxing Council’s Franchise tag. Haney wanted to fight Lomachenko last year, and he’d worked his way to the mandatory spot to face him.

But instead of defending against Haney, Lomachenko accepted the Franchise tag from the WBC and then turned his attention to fighting Teofimo. 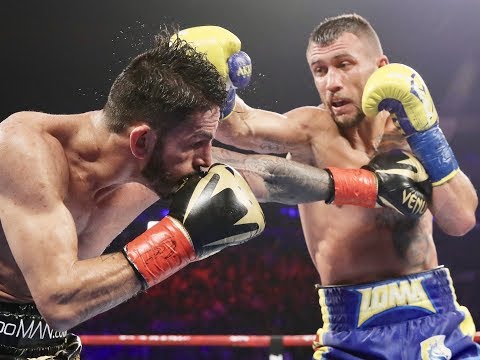 
« Teofimo Lopez: ‘Vasily Lomachenko has never fought anyone like me’