By Allan Fox: In what could be a hint of another comeback, Floyd Mayweather Jr. posted a video clip of him running in the desert with a whole pack of his bodyguards/entourage following him on bicycles. The 43-year-old Mayweather (50-0, 27 KOs) is staying in shape during the pandemic.

This sudden burst of energy by Mayweather in beginning training is a sign that he could be returning to the ring soon after the lockdown stops. However, if Mayweather is hoping to sell his next “fight” against some hapless MMA fighter on pay-per-view, he might want to pick a better time.

All the workouts that Mayweather has been doing lately is a clear signal that he’s going to be returning to the ring soon. He’s made it known that he wants to fight Conor McGregor again and take on UFC star Khabib Nurmagomedov.

Boxing fans still want to see Mayweather fight despite the fact that he hasn’t fought a quality opponent in five years since his victory over Manny Pacquiao in 2015. In Mayweather’s fights since then, he’s beaten over-the-hill Andre Berto, Conor McGregor, and Tenshin Nasukawa.

Will Mayweather get his $100 million asking price

The question is, who will guarantee Mayweather his $100 million asking price so that he can beat him up on another guy with no background in boxing?

If Mayweather tries to sell one of his boxing matches for $100 like he did with Conor McGregor, he won’t get many takers. People have been out of work, and many of them won’t have jobs when the lockdown ends. 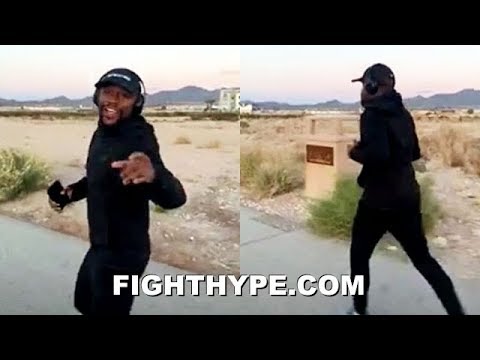 If Mayweather wants to peddle one of his fights, he will do well to wait 2 to 3 years for the economy to rebound. Either that or drop the price to such a low level that even unemployed people will be able to afford it.

Mayweather would interest a lot of boxing fans if he came back to fight Manny Pacquiao, Vasily Lomachenko, Errol Spence Jr., or Terence Crawford. However, that’s too much to ask for in hoping that Mayweather fights any of those guys.

He’s pretty upfront about his disinterest in fighting real boxers. He sees it more appealing to compete against MMA guys in boxing events. Those are the type of opposition that Mayweather can beat well into his 40s.

With the intensity that Mayweather is showing in his daily workouts, he’s training for a fight in mind. The only question is, will he fight this year or in 2021.