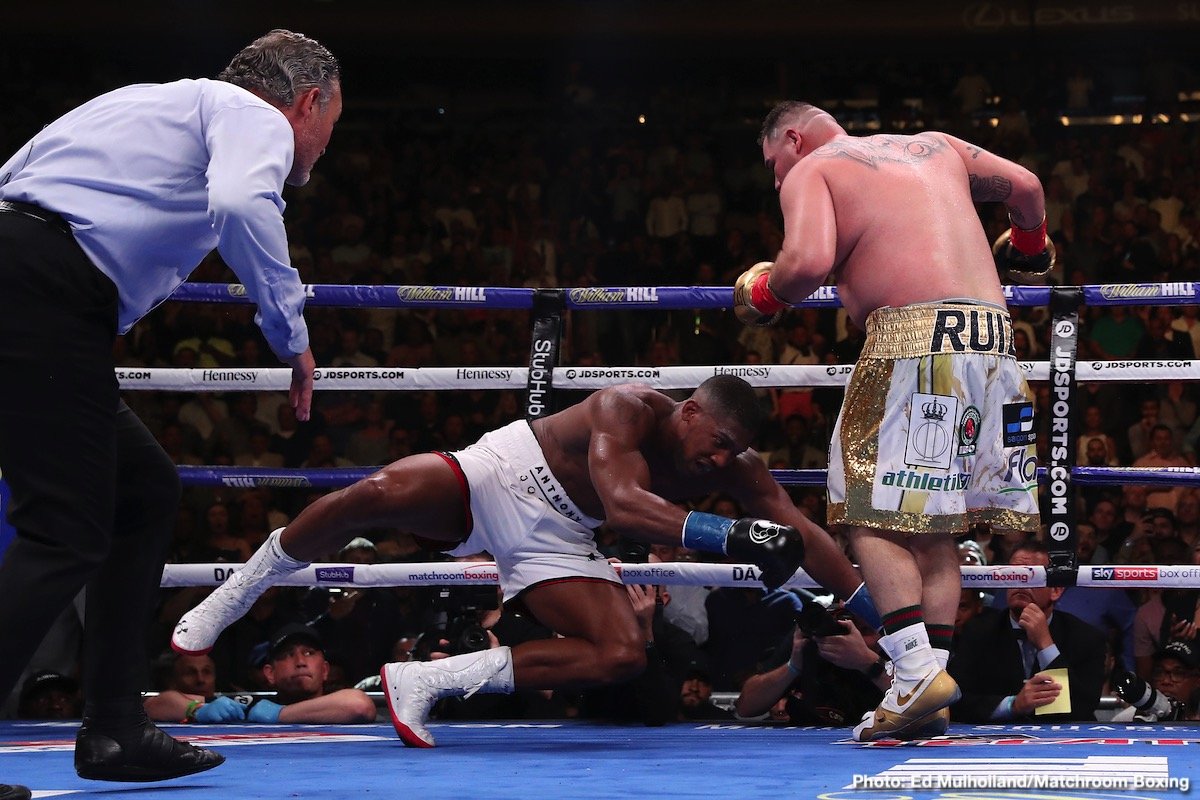 By Dan Ambrose: Former IBF/WBA/WBO heavyweight champion Andy Ruiz Jr. is receiving positive words from his perspective trainer Eddy Reynoso about him being willing to take on the job as his new trainer. Reynoso says he would be “proud” to be the 31-year-old Ruiz’s new trainer.

It’s a positive for Reynoso to have Ruiz Jr. as one of his fighters in his stable, as it gives him a former heavyweight world champion to work with to increase his popularity. Even Reynoso fails to improve Ruiz; he could help bring in other fighters to his stable to be trained.

Ruiz will be a project for Reynoso

The attention alone that Reynoso will get as being Ruiz’s new trainer will make it worthwhile. That’s how it goes in boxing. Fighters play follow the leader. In this case, Canelo Alvarez is the leader, and Ruiz is following him to be trained by the same guy that he’s been with his entire career.

At the same time, Reynoso seems to know already what he could be getting himself into if he takes on the job of Ruiz’s coach. The last guy that trained Ruiz, Manny Robles, he dumped him after his one-sided loss to Anthony Joshua last December.

Ruiz admittingly blamed himself for the defeat by saying that he didn’t put in the effort that he needed by training hard with Robles. Nevertheless, Ruiz still parted ways with Robles, which is odd.

When you see the coach being dumped due to Ruiz’s non-effort in training camp, you have to figure that the next trainer that takes over will get similar treatment once he loses again. If Ruiz can’t improve with his training and diet, it’s only a matter of time before he loses again.

Reynoso ready to take the job as Ruiz’s trainer

“I’d love to work with such a charismatic Mexican fighter like Ruiz,” Reynoso said. “It would be a proud moment as a trainer.

“He needs to work on discipline. Once you get to the World Championship level, you can’t lack discipline.”

Having Canelo as one of his fighters has helped Reynoso attract a lot of talented fighters to his gym to be trained by him. Besides Canelo, Reynoso trains Julio Cesar Martinez, Oscar Valdez, Luis Nery, Mark Casto, and Ryan Garcia.

Teddy Atlas was in the running for the job as Ruiz’s trainer, but it looks like he’s opting to with Reynoso. Given Ruiz’s lack of discipline and his need for a trainer’s complete focus, Atlas would be the better fit.

He doesn’t have a gym full of fighters that he needs to split his time with like Reynoso, and he’s someone that would give Ruiz grief if he started slacking off.

Reynoso isn’t the type to get in Ruiz’s face the way Atlas would. If Ruiz underperforms for Reynoso, he might not get the same tough love treatment that Atlas would give him.

Atlas slams Ruiz for his lack of discipline

That’s why you’d have to say that Atlas is what Ruiz needs. Atlas isn’t going to let Ruiz be a slacker without blasting him verbally with things he might not want to hear. In other words, Atlas will tell Ruiz some truths.

“How can I upset Ruiz with my Tweets if you’re not respecting yourself,” said Atlas. “You’re not repeating the sport. You’re not respecting anybody that has traveled through their journeys in this great sport to be disregarding what you should have been carrying about. That’s why I said those things because they deserved to be said,” Atlas continued in raking Ruiz over the coals.

“I was saying the truth. Yeah, in a clever way and a funny way, but the truth that he allowed to be the truth. It bothered me that he cared so little about those things, about things that come so rarely.

“Just like Buster Douglas did, he went down that treacherous road of allowing the fame and the money make you forget about how you want to feel about yourself the day after. That fame and that money can be more devastating than any punch that you get hit with ever if you allow it to be,” said Atlas on Ruiz.

A lot of boxing fans believe Ruiz disrespected the sport with the way he blew his opportunity by not coming in shape for the Joshua rematch. What makes it worse is that Ruiz dumped his trainer afterward.

With Ruiz Jr. calling out Joshua now trying to get him to give him a third fight, it gives the impression that he wants a cash-out fight that he’s not willing to earn.