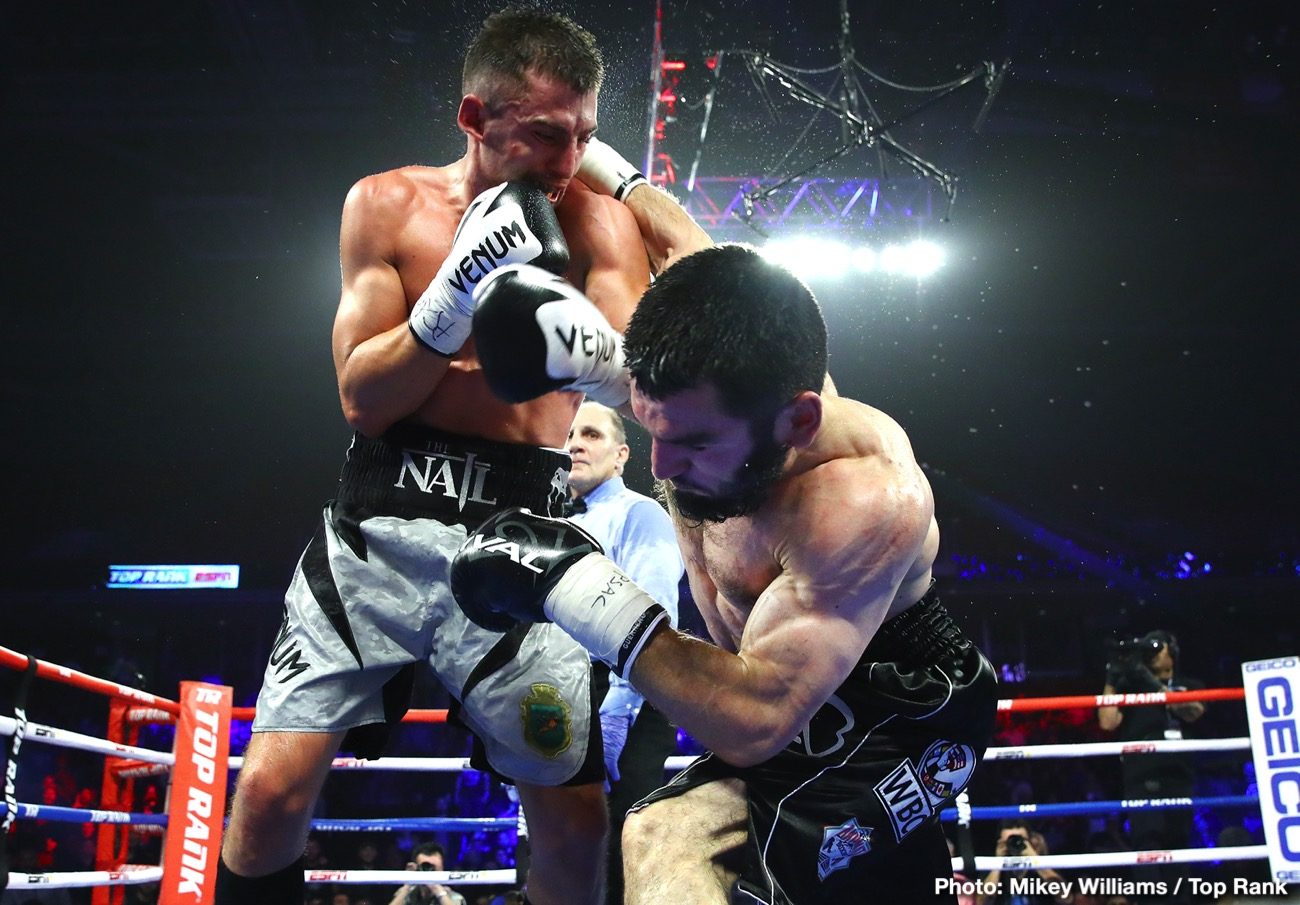 By Tim Royner: Artur Beterbiev would have no problems with fighting in the UK, according to Top Rank president Todd Duboef. IBF/WBC light heavyweight champion Beterbiev (15-0, 15 KOs) will be making a mandatory defense for his IBF belt against Meng Fanlong (16-0, 10 KOs) when boxing starts up again this year or 2021.

After Beterbiev gets Meng out of the way, anything is possible. If Matchroom Boxing promoter Eddie Hearn wants to bring Beterbiev to the United Kingdom to defend against his fighter #2 IBF Joshua Buatsi (12-0, 10 KOs), it’s doable. Hearn will just need to show Top Rank and Beterbiev the money.

Buatsi is not ready to take on a monster like Beterbiev right now. If that fight is made right now, it could end badly for Buatsi. However, he’ll get attention even in losing to Beterbiev, but it won’t be the positive attention that he needs to take his career to the next level.

Unfortunately, there aren’t any talented fighters at 175 in the UK right now. Buatsi possesses power, but he’s so severely flawed that it won’t be much of a fight for Beterbiev to face him in the UK. The money will make it worthwhile for Beterbiev to fight Buatsi in the UK, but the match itself could be a letdown.

Duboef: Beterbiev would fight in the UK

“Beterbiev would fight in the UK in two seconds, and he wouldn’t see it as an obligation,” Duboef said to skysports.com. “He [Beterbiev] is a complete, absolute beast. Beterbiev wants to fight the best and has no issue with where a fight might be. He disregards ‘who’ or ‘where.’ If you’re in front of him, goodbye. That’s it.”

Fighting in the UK wouldn’t be a problem for Beterbiev, but he would need to face someone with experience and talent. Buatsi, 27, is short on experience, and there are a lot of question marks about whether that guy can cut it at the pro level. He’s got power, but he’s BADLY flawed and not ready for the big leagues against a guy like Beterbiev.

If Buatsi’s management wants to wait until Beterbiev gets old before making the fight, it will increase his chances of success. Beterbiev is 34 now, but he’s still fighting a very high level. With Buatsi’s #2 ranking with the IBF, he’s going to be in a position soon whether he’ll either need to take the fight with Beterbiev or give up his ranking and play it safe fighting other opposition.

Buatsi could soon be facing Callum Johnson if he beats Igor Mikhalkin. Those two will be fighting for the EBU light heavyweight title.  Winning the EBU 175-lb title will put Buatsi in position to challenge Beterbiev if he’s ready for that step.

Meng Fanlong next for Beterbiev

Beterbiev’s mandatory title defense against little known Meng Fanlong had been scheduled for last month on March 28 at the Videotron Centre in Quebec City, Canada. Unfortunately, the Beterbiev vs. Meng fight needed to be postponed. However, when boxing resumes, be it this year or next, it’ll be a simple matter for Top Rank to reschedule the Beterbiev-Meng fight, and get that out of the way.

Not surprisingly, fans had little interest in the Beterbiev vs. Fanlong fight. 2012 Olympian Meng has never fought anyone of note since turning pro in 2014, and he’s likely to be WAY over his head when he gets inside the ring with Beterbiev.

It would have been better had the International Boxing Federation ordered Meng to fight in a title eliminator against a good contender like Buatsi, Callum Johnson, Marcus Browne or Badou Jack. At least if Meng had to face one of those contenders, you could say that he deserves to be challenging Beterbiev for his IBF title.