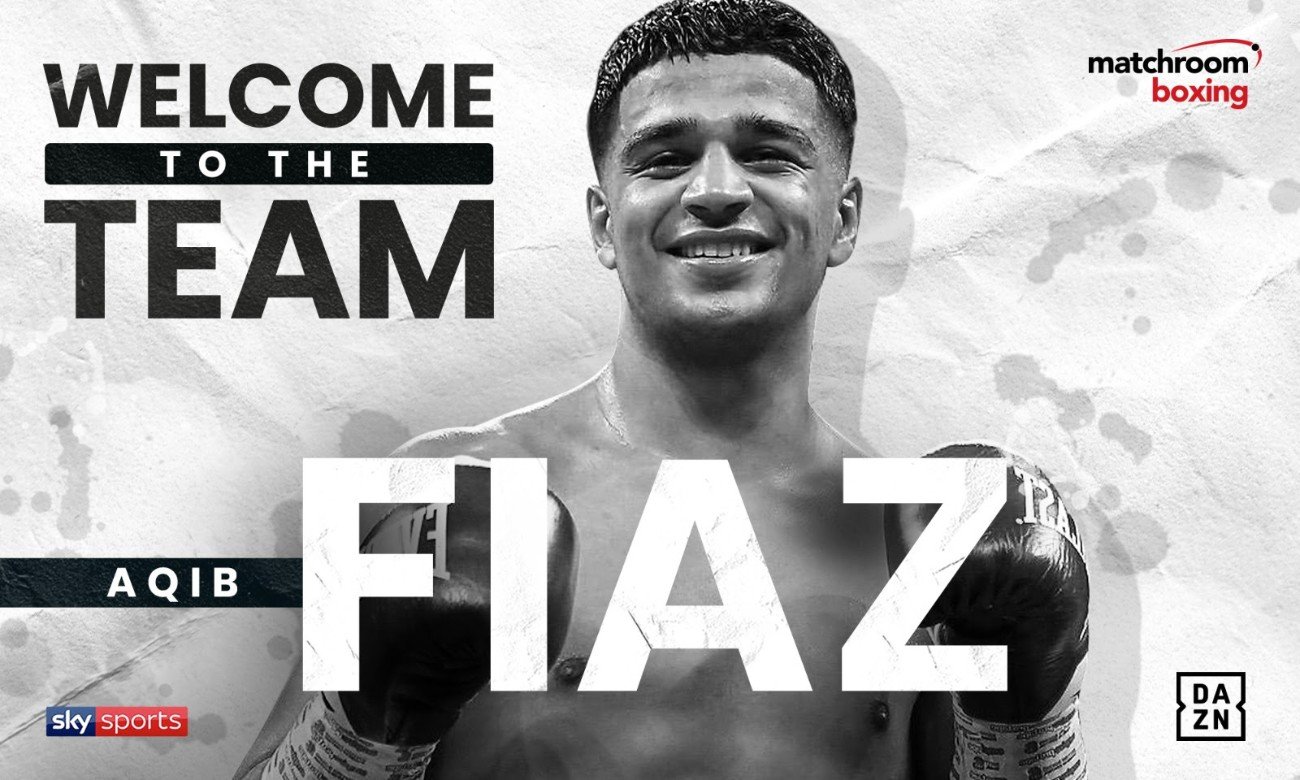 Trained by renowned coach Jamie Moore at the VIP Gym in Astley alongside two-weight World Champion Carl Frampton and former WBA Super-Middleweight ruler Rocky Fielding, Oldham’s Fiaz is rapidly improving with every fight and has already amassed an impressive following in his hometown.

He made the decision to turn professional in March 2019 following a successful stint in the amateur code in which he represented his country at the Senior level twice. In 75 amateur bouts, Fiaz won nine Area Titles and a National Youth Title at 60kg in 2017.

Fiaz fulfilled a life-long dream when he fought at Manchester Arena last month on the undercard of Jono Carroll vs. Scott Quigg, earning a shutout points with over Dean Jones to move to 5-0, and the 20-year-old is hoping for more big nights in the North West following his link-up with Matchroom.

“I’ve worked my whole life for a deal like this,” said Fiaz. “I’d like to thank Eddie Hearn and Matchroom Boxing. I can’t thank them enough for giving me this opportunity. I’m only 20-years-old and I’m already being trained by one of the best trainers in the country in Jamie Moore. Now on top of that, I’ve been signed to the best boxing promoters in the world.

“I’m really excited and I can’t wait to get back out there and cracking on with the next chapter of my career. I feel like a caged animal with this isolation and I’m ready to go now. I’m still training in my garage at home, keeping fit and ready to make my big Matchroom debut later this year.

“I’m a come-forward pressure fighter and I’ve always studied the likes of Michael Gomez, Ricky Hatton, and Jamie Moore. I can also box as well because I boxed for England, I’ve boxed at a high level as an amateur and there’s a lot of sides to my game that I haven’t shown in the ring yet.

“I started boxing around the age of eleven which was when I had my first fight. I was very overweight as a kid. At first, it was all about losing weight, but I ended up falling in love with the sport. I lost my first amateur fight but I enjoyed the competition, being punched in the face and punching someone back.

“I was first invited to the VIP Gym as a sparring partner for Carl Frampton when he boxed Josh Warrington. From there I asked Jamie if he’d like to train me and he said yes. I’ve been there since the beginning of 2019 and I’m constantly improving. I’m learning loads from Carl, Jack, and Rocky and soaking it all up.

“Dillian Whyte vs. Alexander Povetkin is the next show in Manchester, so I’d love to get on that one for my first fight with Eddie. It’s absolutely massive and one of the shows that I’d be at as a fan if I wasn’t boxing. You’ve got Katie Taylor vs. Amanda Serrano and Callum Johnson in a European Title fight. If I’m on that then it will be the icing on the cake.”

“I’m delighted to add exciting Super-Featherweight prospect Aqib Fiaz to our growing stable of talent,” said Eddie Hearn. “I was very impressed with his performance on the Jono Carroll vs. Scott Quigg undercard last month and Jamie Moore has been raving about his talents for a while. It always helps to be a big-ticket seller in this game and Aqib has already got a huge following in Oldham. I’m looking forward to watching his career develop over the next few years.”

The teen sensation claimed a light-welterweight bronze medal at the 2018 Games in Buenos Aires and was then handed the honour of being named Team GB’s Closing Ceremony flagbearer.

Pakistan-born Slough hero Azim, who also won silver at the European Youth tournament and is a six-time national champion, is eager to kick off life as a professional under MTK Global.

Azim said: “I couldn’t be happier to sign a management deal with MTK Global as I officially announce my exit from amateur boxing.

“MTK Global is an organization I feel I can trust to be looking out for me in my quest to become a world champion. I look forward to working with MTK Global.”

MTK Global Vice-President Jamie Conlan said: “This is another top signing for MTK Global and we’re confident Hassan has a huge future in the professional game after such success in a relatively short time as an amateur.

“It’s great that the best of Team GB is now picking MTK Global as its first port of call for turning pro. We signed Jordan Reynolds only last month and now we’ve snared another potential diamond in Hassan. We can’t wait for him to get started and we’re sure he’ll do himself, his family, Slough and us proud.”

News of Azim’s first assignment in the paid ranks will be announced in due course.


« Adam Smith predicts Joshua vs. Pulev will be CANCELLED

‘Ryan Garcia is the NEXT Canelo Alvarez’ – Teddy Atlas »